Here is a snapshot of the most-read and top stories of 2021 posted by the University of Nebraska at Kearney’s communications and news team.

The University of Nebraska at Kearney is requesting approval of a project that would replace and relocate the on-campus housing for fraternity and sorority members.
The plan provides long-term stability for Fraternity and Sorority Life (FSL) while creating another affordable and attractive housing option that meets the demands of today’s students.

A proposal presented by University of Nebraska President Ted Carter would strengthen the successful partnership between the University of Nebraska at Kearney and University of Nebraska Medical Center while further addressing the need for more health care workers in the state’s rural areas.
A Rural Health Complex would significantly expand the capacity for students in a variety of health fields to study and train in Kearney, with an ultimate goal of growing the talent pipeline for rural communities.

With a modern design and prominent location, the Regional Engagement and Alumni Center planned for UNK’s University Village development will be impressive to look at. But that’s not what makes the project stand out.
The roughly 49,000-square-foot facility, filled with technology-rich office and meeting spaces, will serve as a conduit that connects central and western Nebraska with the rest of the state.

The fight to become UNK was difficult, but well worth it

Doug Kristensen was a first-year state senator when he stepped to the podium to address his colleagues on that fateful day in April 1989.
“It’s the only time I remember being nervous in the Legislature,” he admits.
Even then, 13 years before he became chancellor of the University of Nebraska at Kearney, Kristensen understood the magnitude of the situation.
The Legislature was preparing to debate LB247, a higher education bill that would forever change the trajectory of the school he now leads.

With a freshman class 125 students larger than last year, the University of Nebraska at Kearney logs an enrollment increase for fall 2021, to 6,275.
“This is especially good news for UNK and for Kearney, particularly in light of the ongoing challenges with COVID-19 and economic uncertainties for some students and their families,” said Kelly Bartling, vice chancellor for enrollment management and marketing. “Our faculty, staff and students have worked hard to adjust and maintain the quality UNK experience that we are known for. Increasing enrollment is a priority and campus has worked as a team on recruitment and student success.”

The University of Nebraska at Kearney campus will look a little different when the 2021-22 school year begins.
UNK is removing four vacant buildings this spring and summer as part of its campus master plan. The project, contracted to Blessing Construction of Kearney, is expected to begin within the next two weeks and be completed in early August.
The former Luke & Jake’s Bar-B-Q restaurant, UNK’s east heating plant, Conrad Hall and the Otto C. Olsen building will all be torn down using an excavator.
“Through this effort, we are eliminating space costs and avoiding significant investments in deferred maintenance costs, allowing more funds to be reinvested back into our educational mission,” said Jon Watts, vice chancellor for business and finance.

A new pathway program launching this fall makes it easier for students to start their criminal justice education at CCC before finishing a bachelor’s degree at UNK. The 2+2 plan creates a seamless transition between the partner institutions and provides additional flexibility for transfer students and working professionals.
“There’s a strong demand for law enforcement and criminal justice professionals across the state,” said associate professor Timbre Wulf, chair of UNK’s Department of Criminal Justice. “Agencies are looking for highly educated, skilled individuals to fill these positions, and a bachelor’s degree really gives applicants a leg up.”

The ransomware attacks against Colonial Pipeline Co. and JBS are the latest on a long list of high-profile cybercrimes targeting businesses in the U.S.
Liaquat Hossain and UNK College of Business and Technology Dean Tim Jares have been meeting with officials from K-12 schools to discuss new ways to promote STEM education and increase the number of high school graduates interested in cybersecurity and other computer science fields.

Emily Farley is one of roughly 70 students currently enrolled in UNK’s aviation program, which offers a flight operations emphasis for students who want to be commercial pilots and an aviation support services emphasis that prepares graduates for other jobs in the industry, such as air traffic controller, airport manager or aircraft maintenance technician.
UNK is one of just two schools in Nebraska with a collegiate-level aviation program.
Last summer, UNK signed a five-year agreement with Colorado-based American Flight Schools – one of the largest flight training organizations in the U.S. – to provide increased access to technologically advanced aircraft and professional instructors for students. 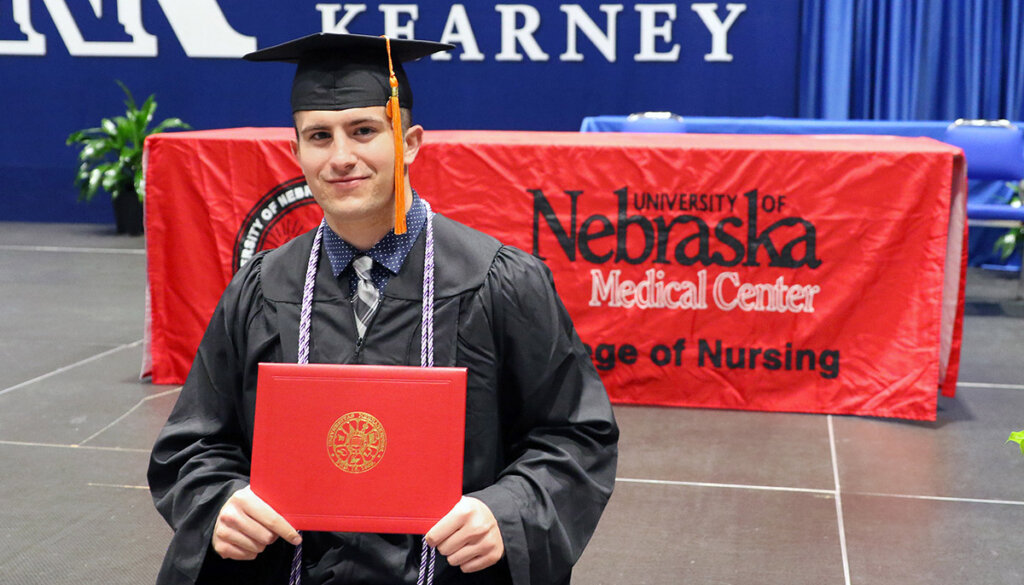 Preston Hall already knew he wanted to work in health care when he started classes at the University of Nebraska at Kearney.
Simply put, he wants to help people.
That took on greater meaning in summer 2018, when he was the one in need of lifesaving care.
Then a junior at UNK, Hall was returning from a weekend trip to Valentine when his southbound Ford Fusion and a northbound motor home collided on U.S. Highway 83 near Thedford. The head-on crash crumpled his four-door sedan like a soda can, trapping the 20-year-old Loper football player inside.

Junior quarterback TJ Davis ran for a two-yard touchdown with 1:52 left and the UNK defense made a tackle at its own three-yard line in the waning seconds to help the 21st-ranked Lopers hold off 13th-ranked Western Colorado, 31-24, Saturday afternoon in an NCAA Division II Playoff game in Gunnison, Colo.
The sixth-seeded Lopers (10-2) win a playoff game for the second time in school history and advance to the second round, where they’ll take on second-seeded Angelo (Texas) State.

Loper volleyball players, coach learn to enjoy every moment together

Love and Basketball: UNK coaches dedicated to their team and each other

Our Town. Our Team: UNK student-athletes connect with community during annual event