“I will buy a hot tub if we win the conference championship today,” she told her players – on video – shortly before Sunday afternoon’s MIAA Tournament final in Hays, Kansas.

Looks like the Lopers will relax in style during their next team get-together at the Eighmey house.

UNK knocked off rival Fort Hays State 57-51 to claim the program’s first-ever MIAA Tournament title and earn the conference’s automatic bid to the NCAA Division II Women’s Basketball Championship. The Lopers (22-3) are making their 13th all-time appearance in the NCAA Division II national tournament, and their first since 2009.

“This is something I’ve really been hoping and dreaming for since my freshman year,” she said. “The MIAA Tournament is a big deal and the MIAA is no joke, so to win something like this is awesome. Not a lot of teams get to do this.”

Sanger is no stranger to success. She won three Class C-2 state basketball championships at Crofton High School, and this accomplishment rivals those moments.

“To beat Hays in the MIAA championship after they beat us twice this year, that ranks pretty far up there,” Sanger said.

UNK, ranked 14th nationally in the WBCA Coaches Poll, is one of four MIAA schools to make the 48-team NCAA Division II tournament field. The Lopers earned the second seed in the Central Region and will receive a first-round bye before facing either Minnesota Duluth (13-1) or Emporia State (18-6) at 7:45 p.m. Saturday in Warrensburg, Missouri. Top-seeded Fort Hays State (22-3) also receives a bye before playing either St. Cloud State (12-5) or regional host Central Missouri (19-4). 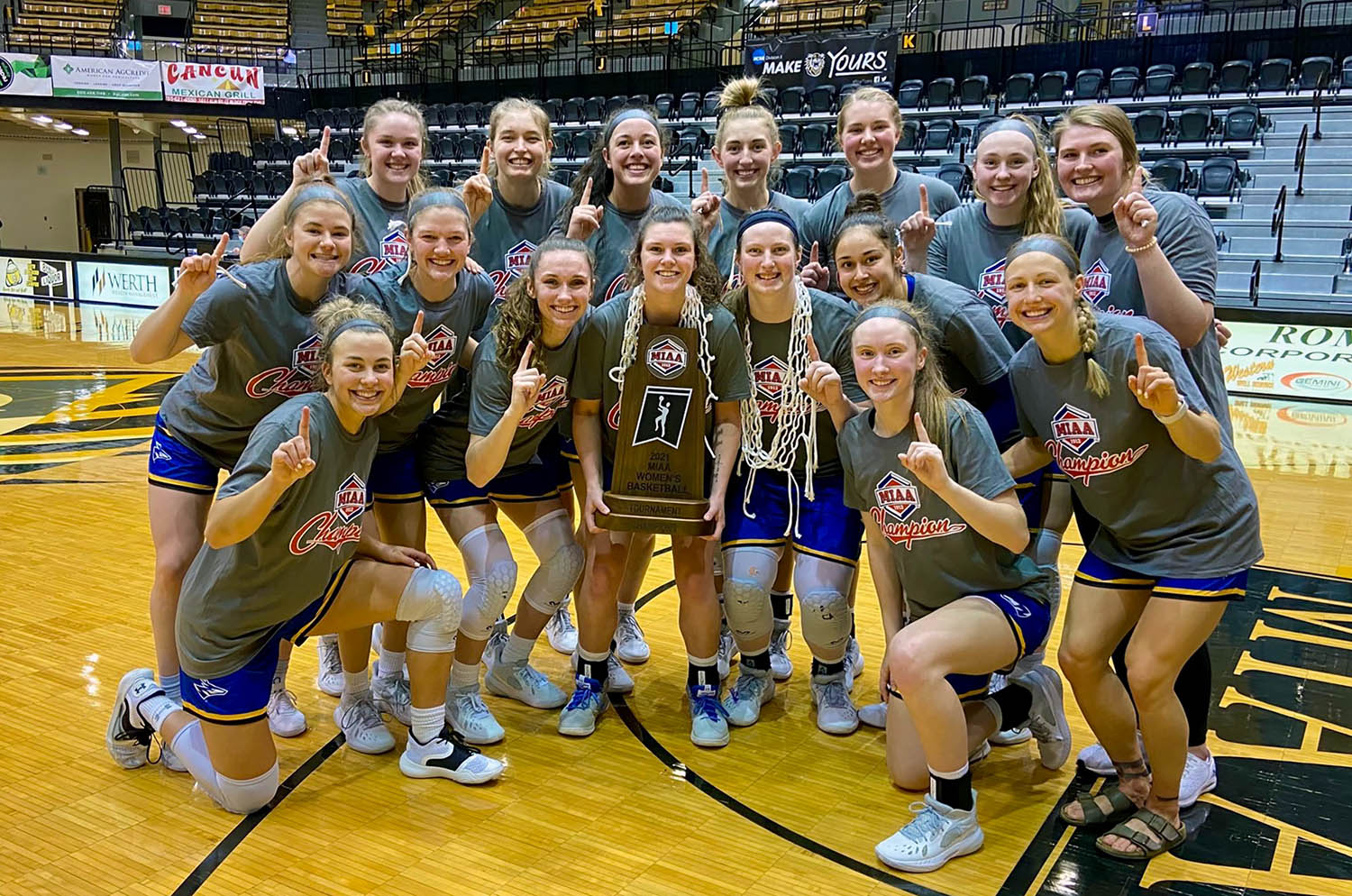 “It’s been a long time coming,” she said. “I’ve received a lot of messages from alumni who were playing here when I first took the job six years ago. Hopefully they feel a lot of pride knowing they helped contribute to where the program is now.”

The UNK coach also gave a lot of credit to her current players, who remained focused and committed to each other during a difficult season that was drastically impacted by COVID-19.

“This group gets along really, really well and they care about and trust each other,” Eighmey said. “They’ve played a lot of games together. They stick together through adversity. And they’ve learned to win together.”

For starting point guard Haley Simental, that chemistry played a big part in her decision to transfer to UNK in fall 2019.

“With the coaches we have, it’s more than just basketball,” she said. “I love to win, but that’s not the only reason I came here. I came here because of coach Carrie and coach Devin and the culture they built.”

“Coach Carrie is our leader and she really sets the tone for us and wants us to grow together,” added Simental, a graduate student from Pueblo West, Colorado. “No one has a big ego or becomes arrogant. We work really hard to make each other better and know each other on a deeper level than just teammates.”

The conference title and national tournament appearance are icing on the cake.

“This is the kind of stuff I’ve dreamt about since I was a little kid – winning championships,” Simental said. “It was really a dream come true to get that win, especially in Hays.”

Eighmey, who won three NAIA national titles as a player and assistant coach at Hastings College, has a simple piece of advice for her team as they prepare for their next goal: take it all in and enjoy the experience.

“All you have to do is play well for a few games, and I think we’re playing pretty well right now.”

Promising to buy a second hot tub might not hurt, either.

Tickets for the NCAA Division II Central Region games can be purchased at https://ucmtickets.universitytickets.com.

Because of COVID-19 restrictions, a limited number of tickets are available.

UNK games will be broadcast live on KRVN 93.1 FM and a free video livestream will be available at https://themiaanetwork.com/ucmmules.