KEARNEY – Doug Kristensen was a first-year state senator when he stepped to the podium to address his colleagues on that fateful day in April 1989.

“It’s the only time I remember being nervous in the Legislature,” he admits.

Even then, 13 years before he became chancellor of the University of Nebraska at Kearney, Kristensen understood the magnitude of the situation.

The Legislature was preparing to debate LB247, a higher education bill that would forever change the trajectory of the school he now leads.

“The Rotunda was packed, mostly Kearney supporters quite frankly,” said Kristensen, who was asked to introduce the amendment that ultimately brought Kearney State College into the University of Nebraska system.

“There was a lot of buildup and emotions were high.”

The battle over the future of Kearney State College had been brewing for several years.

An attempt to bring both Kearney State and Wayne State colleges into the university system failed in 1974, and another bill that would have united all four state colleges with the University of Nebraska was shot down in 1985. State Sen. Lorraine Langford of Kearney and others even proposed an idea to turn Kearney State into an entirely new university.

Jerome Warner had a different vision. The state senator from Waverly knew Nebraska was too small to sustain competing public university systems, so he focused on maintaining a single, unified system.

“And he was convinced that Kearney was a very good addition to that,” Kristensen noted. “As it turned out, he was exactly right.”

With around 10,000 students, including its main campus and several satellite locations, Kearney was the largest of the four state colleges, easily outpacing Chadron, Peru and Wayne, which produced just 40% of the system’s total enrollment combined.

However, because of the Nebraska State College Board of Trustees’ funding philosophy, the Kearney campus lacked the money it needed for capital improvements and faculty pay increases.

“They were just flat being taken advantage of. There’s no question about it,” said Pete Kotsiopulos, a prominent Kearney businessman who served on the Board of Trustees from 1983 to 1989.

“Maybe I’m prejudiced a little bit, but Kearney was looking at a bigger picture. How can we help deliver university-type education in greater Nebraska?”

“Kearney really had the view of moving forward, and I think that’s the hallmark of this community. It’s the hallmark of this campus, too,” Kristensen said. “I think this campus has always had a very forward-looking view. What are we going to do next? What do we need to do to serve people? How are we going to get it done? Who’s going to help? And what can you do? That discussion has happened year after year after year here, and I think it shows.”

Warner, whose father Charles introduced the 1903 legislation that created the original Nebraska State Normal School at Kearney, crafted the plan to add Kearney State to the University of Nebraska system. His amendment was added to LB247, a bill sponsored by Sen. Ron Withem of Papillion, then-chairman of the Legislature’s Education Committee, that called for a comprehensive study of higher education and created a new Coordinating Commission for Postsecondary Education. The measure was co-sponsored by Langford and Kristensen, a Minden senator whose legislative district included part of Kearney.

“The real war came when we introduced the amendment,” said Kristensen. 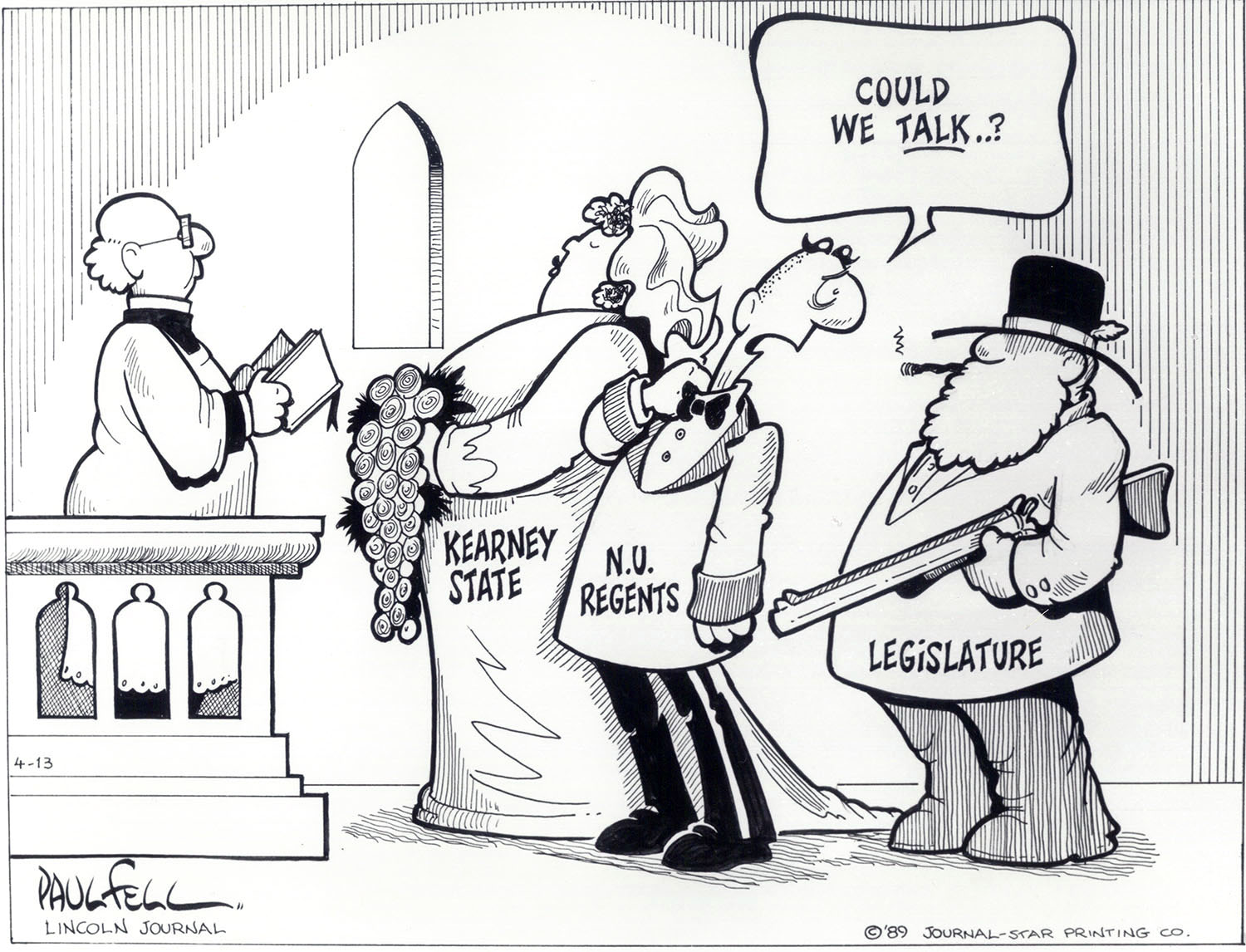 Officially, the University of Nebraska Board of Regents took a neutral stance on the measure; however, individual members privately spoke against the bill.

The State College Board of Trustees opposed the bill, but Nester, Kotsiopulos and other supporters continued to move the plan ahead.

Battle lines had been drawn, especially when it came to Lincoln and Chadron-area lawmakers, media outlets, the University of Nebraska-Lincoln student body and other pro-UNL factions who thought the addition of Kearney State would dilute the university system. One political cartoon from the Lincoln Journal Star depicted the Legislature forcing the Board of Regents down the aisle to unite with Kearney State during a shotgun wedding.

“The opponents of Kearney became very clear. The line got very bright,” Kristensen said. “You were either for us or you were against us.”

In the end, LB247 passed the Legislature by a vote of 36-11, then the fight moved to a completely new level.

The state Attorney General’s Office questioned the bill’s constitutionality since the Board of Trustees was tasked with governing four – not three – state colleges. A lawsuit sent the issue to the Nebraska Supreme Court, where four of the seven judges deemed the law unconstitutional.

The thing is, it takes a supermajority of five judges to overturn an act of the Legislature.

“We’re here by one vote,” Kristensen said with a smile. 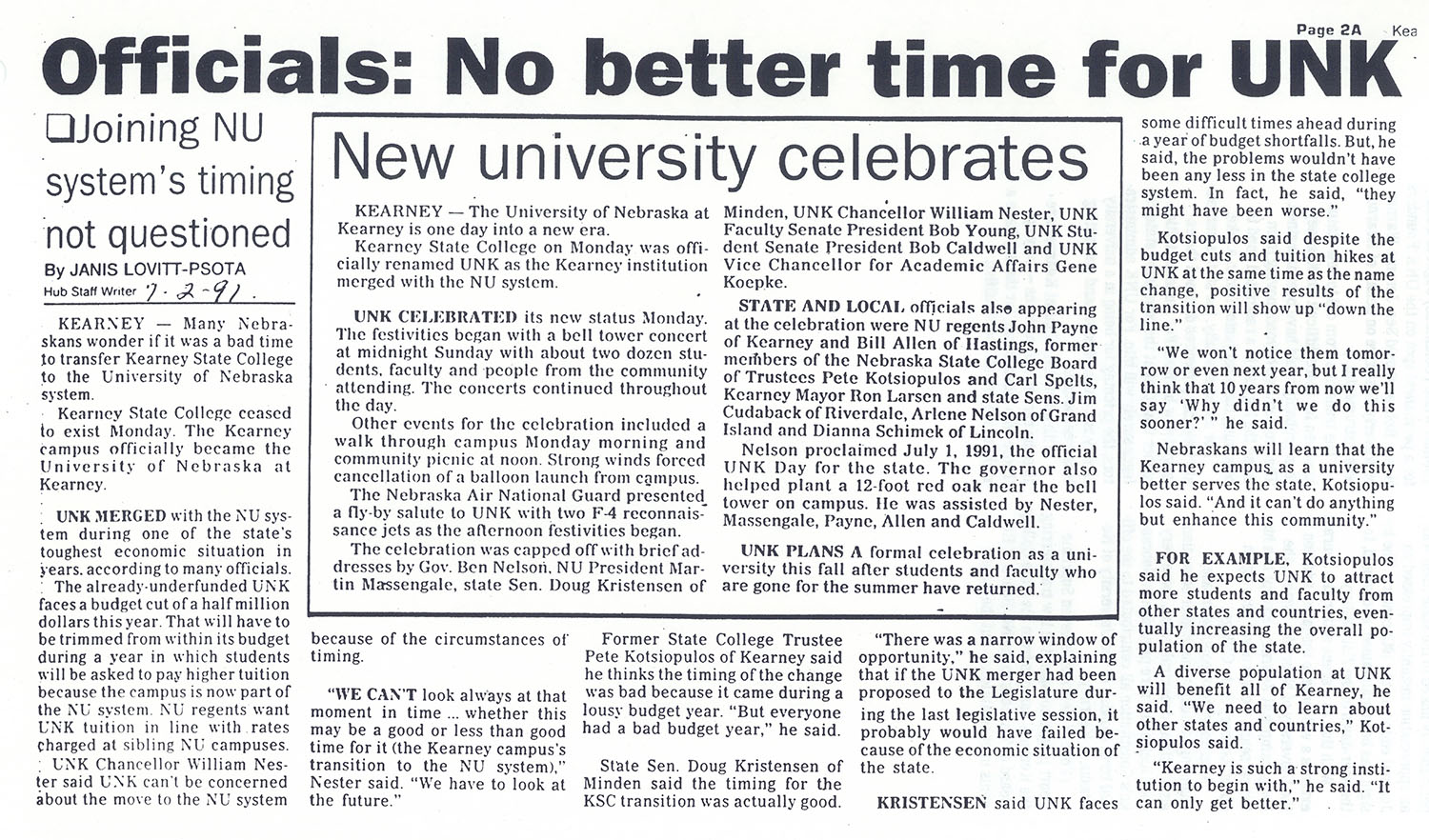 Campus celebrated with a “Start the Day with UNK” ceremony. Nester, who became UNK’s first chancellor, planned to lift off from Foster Field in a hot air balloon before high winds grounded his flight and a barbecue lunch was attended by then-Gov. Ben Nelson and NU President Emeritus Martin Massengale.

Kristensen, who went on to serve as speaker of the Legislature from 1997 to 2002, called it a “historic” moment.

“UNK is very lucky to be part of the university today. It’s the best thing that’s ever happened to this campus,” he said.

The prestige that came with the “university” name paid immediate dividends as the school was able to more easily attract high-quality faculty. Significant salary increases included in the UNK Education Association’s first three contracts made the school even more competitive and moved it well beyond the undesirable distinction of being among the lowest-paying four-year public colleges and universities in the U.S.

Although there was some hesitancy at first, UNK faculty now embrace their role as both educators and researchers, using their time in the lab or field to enhance their teaching and provide additional hands-on learning opportunities for students.

Seventy-five percent of UNK faculty have terminal degrees, compared to 60% three decades ago, and the university offers significantly more academic programs for students, particularly at the graduate level.

The physical changes have been just as impressive.

In the past three years, the university has improved the Nebraskan Student Union and Fine Arts Building, opened a state-of-the-art STEM facility (Discovery Hall) and developed University Village, a 104-acre campus addition where the Village Flats apartments and Plambeck Early Childhood Education Center are located. An indoor tennis complex and private housing development are currently under construction at University Village, and a Regional Engagement Center is expected to open there in early 2023.

Other projects, such as the installation of a new fiber network and construction of the central utilities plant, are less flashy, but equally important.

“I’m very proud of what this campus has done in 30 years,” said Kristensen, the chancellor since July 2002. “This place has done such wonderful things for central Nebraska, for the city of Kearney and for the state of Nebraska. So many students have benefited here.” 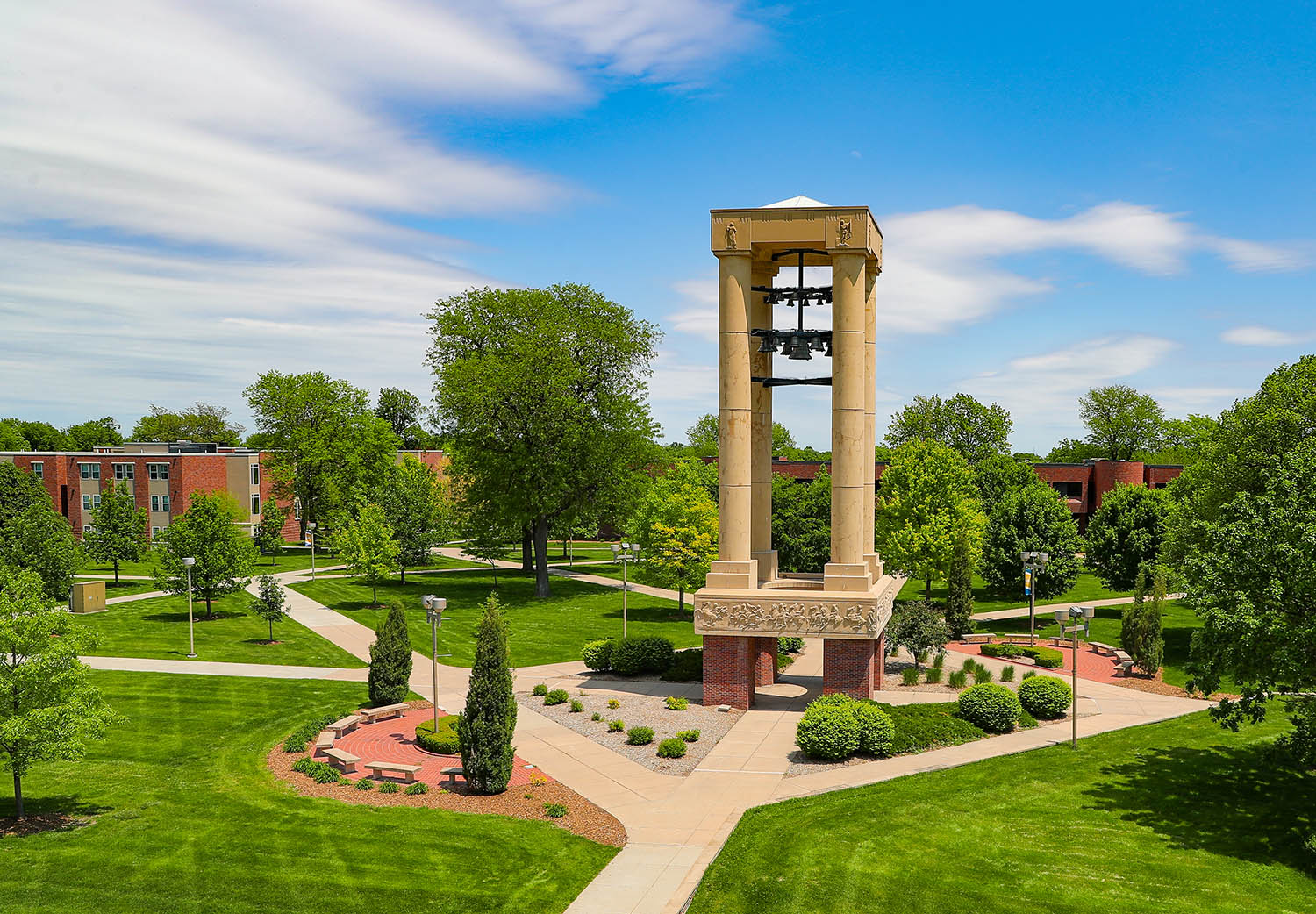 To this day, UNK remains one of the region’s best schools for current and future PK-12 teachers and school administrators while also offering top-notch programs in areas such as business, aviation, supply chain management and kinesiology and sport sciences. The list goes on and on.

“Most people would agree that Kearney would be a totally different community without this campus,” said Kotsiopulos, who served as the city’s mayor from 1994 to 2002 and later held positions with the University of Nebraska system and NU Foundation. “People would sell their soul to have some higher education element in their community.”

Kearney’s population has increased from around 24,000 to nearly 34,000 since UNK joined the university system, and roughly 1 in 7 residents has at least one degree from the school, which attracts students and employees from around the globe. With nearly 1,000 faculty and staff members, UNK is among the city’s largest employers.

“Generally speaking, it’s one of the topics that come up when somebody asks, ‘Why are you here?’” Kotsiopulos said.

Kristensen looks back at the past three decades with “tremendous satisfaction and pride,” realizing how lucky he’s been to be in the right place at the right time.

“The next 20 years, man, great things are going to happen here,” he said. “I can’t wait. I want to see what the next 20 years are like, because I think this place is going to just take off.”