KEARNEY – He’s the goofy one.

The self-proclaimed king of one-liners. The guy who showed up to practice last December dressed in an elf costume. Someone who once reproposed to his wife (on a dare from their players) using a vending machine-quality plastic ring.

“I try to make her laugh every day,” says Devin Eighmey, head assistant coach on the University of Nebraska at Kearney women’s basketball team. “I don’t know if she thinks I’m funny, though.”

She’s a “processor.” The straight-to-the-point, even-keeled one who brings a level of focus to the relationship.

Together, they make the perfect teammates.

“There’s no other couple in the world more compatible for each other than those two,” said Klaire Kirsch, a junior guard from Rapid City, South Dakota. “I don’t think anyone could handle Devin like Carrie does, and I don’t think anyone could handle coach Carrie and her competitive nature the way coach Devin does. I think they really balance each other out as coaches and also as people.”

The Eighmeys arrived on the UNK campus in spring 2015, but they were far from a package deal at that point.

Carrie had just been named the head women’s basketball coach and Devin was hired as an assistant for the men’s program.

For one of them, it was love at first sight.

“If you ask Devin, he says the first time he saw me coaching he knew he was going to marry me,” Carrie said. “It took me a little longer than that.”

“I had to convince her more than she had to convince me,” Devin admits. “I used to stop by her office at about 5 o’clock and ask for coaching tips, which was really not the case. I was just trying to get to know her.”

The Independence, Missouri, native, who was smitten by Carrie’s beauty and big heart, used his coaching connections to seal the deal. He “made a couple phone calls” to people who knew Carrie and enlisted the help of Brandon Rohr, a mutual friend who was an assistant on the UNK women’s basketball team.

They hatched a plan to put together a birthday party – Carrie’s is May 27 and Devin’s is May 30 – so he could ask her out.

“Looking back, and watching him recruit, I sometimes joke with him that he used some of the same tactics to recruit me,” Carrie said with a smile.

The two “basketball junkies” formed an immediate bond. They shared similar coaching philosophies and were equally passionate about the sport. They also have the same competitive drive.

“We had a lot of shooting competitions when we were dating and they were very intense – very intense,” Carrie said. “Devin and I have both come to the conclusion that when we’re in a competitive environment, we’re better off on the same team. It’s better for our marriage.”

That being said, Devin is willing to concede one thing: “If you’re asking who the better player and coach is, just look at her resume. Most people never win a national championship, and she’s won three.”

As a player, Carrie led Hastings College to four straight NAIA Division II national tournament appearances, winning titles in 2002 and 2003. The All-American point guard still holds the school records for career assists (724) and steals (371). She was an assistant coach at Hastings when the Broncos won their third national championship in 2006, and she went 68-31 with two national tournament trips, including a semifinals appearance, as the team’s head coach from 2012-15.

The Edgar native graduated from Sandy Creek High School, where she was part of a 95-game winning streak and four Class C-1 state titles.

Devin played basketball at North Central Missouri College, where he was a two-time all-region selection, Upper Iowa University and Peru State College. He coached at William Jewell College and was a graduate assistant at Northwest Missouri State University before joining the UNK men’s basketball program.

The Lopers went 21-12 and reached the second round of the NCAA Division II national tournament in his only season as an assistant for the men’s team.

Following their engagement, Devin joined Carrie’s staff so they could work together both on and off the court.

“Devin sacrificed a lot to follow my career,” Carrie said.

“I knew I was marrying a really good person. And ultimately, that’s the most important thing,” Devin said. “She’s my best friend and I’m very fortunate that I’ve been able to find that in life.”

The Eighmeys were married on Sept. 3, 2016, at Yanney Park in Kearney.

Their first game coaching together was just two months later.

“That first year, we learned so much about each other,” Carrie said.

“It’s good marriage counseling, especially when you’re in the second year of a rebuild,” Devin added with a laugh.

The Lopers went 12-16 that season, but the Eighmeys were undeterred.

“We’re all-in type of people. If you’re going to do this at a high level and build a successful program, you have to be invested and you have to be all-in,” Devin said.

The turnaround didn’t take long. UNK is 78-29 over the past four seasons, including a 16-2 mark in 2020-21. The Lopers are currently ranked 13th nationally in the WBCA Coaches Poll and 15th in the D2SIDA Media Poll.

“The team we are now is completely different than what it was when I got here – for the better,” said Kelsey Sanger, a senior guard from Crofton. “I credit a lot of that to the culture they wanted to build.”

Sanger and Kirsch both came to UNK largely because of the team-first, family environment the Eighmeys created.

“I kind of consider them my second parents because I’ve been through a lot with them and they’ve helped me so much,” Sanger said. “For coaches to love you and care about you and want you to be your best self, that’s everything you can ask for.”

The Eighmeys set an example for their players by showing them what a marriage should look like, according to Kirsch, who misses the “family dinners” her coaches hosted on Sunday nights before the COVID-19 pandemic.

“As players, it’s important to see and witness that love they give to us and give to each other every day,” Kirsch said. “They always remind us that they love us like their kids and they definitely treat us that way, too.”

Sure, there are times when Carrie and Devin disagree during a practice or game – “Mom and dad are fighting has definitely been said a few times,” Kirsch said with a grin – but those moments never linger.

“They are a perfect example of not holding grudges and getting over things quickly,” Kirsch added.

The Eighmeys built their relationship on loyalty and trust, the same qualities exemplified by their players.

“From a professional standpoint, we work really well together,” Carrie said. “We make each other better.”

“People ask us all the time, ‘How do you do this? As a married couple, how do you work together every day?’ Honestly, we’re to the point where we just respond with, ‘How could you not? How could you not do something like we get to do, where you love your job, you get to help student-athletes grow and you have great experiences here at UNK?’ We see it as a blessing and we’re really grateful for the opportunity we have here.”

Devin agrees – although his wife did shoot down the idea of sharing an office.

“We feel very fortunate because we get to do something we love,” he said. “Basketball has been great to both of us. It’s been a huge part of our lives. I mean, it brought us together, so for us not to share that same experience with others would be a shame.”

Santa sent an elf to practice today for an early Christmas surprise for our team. 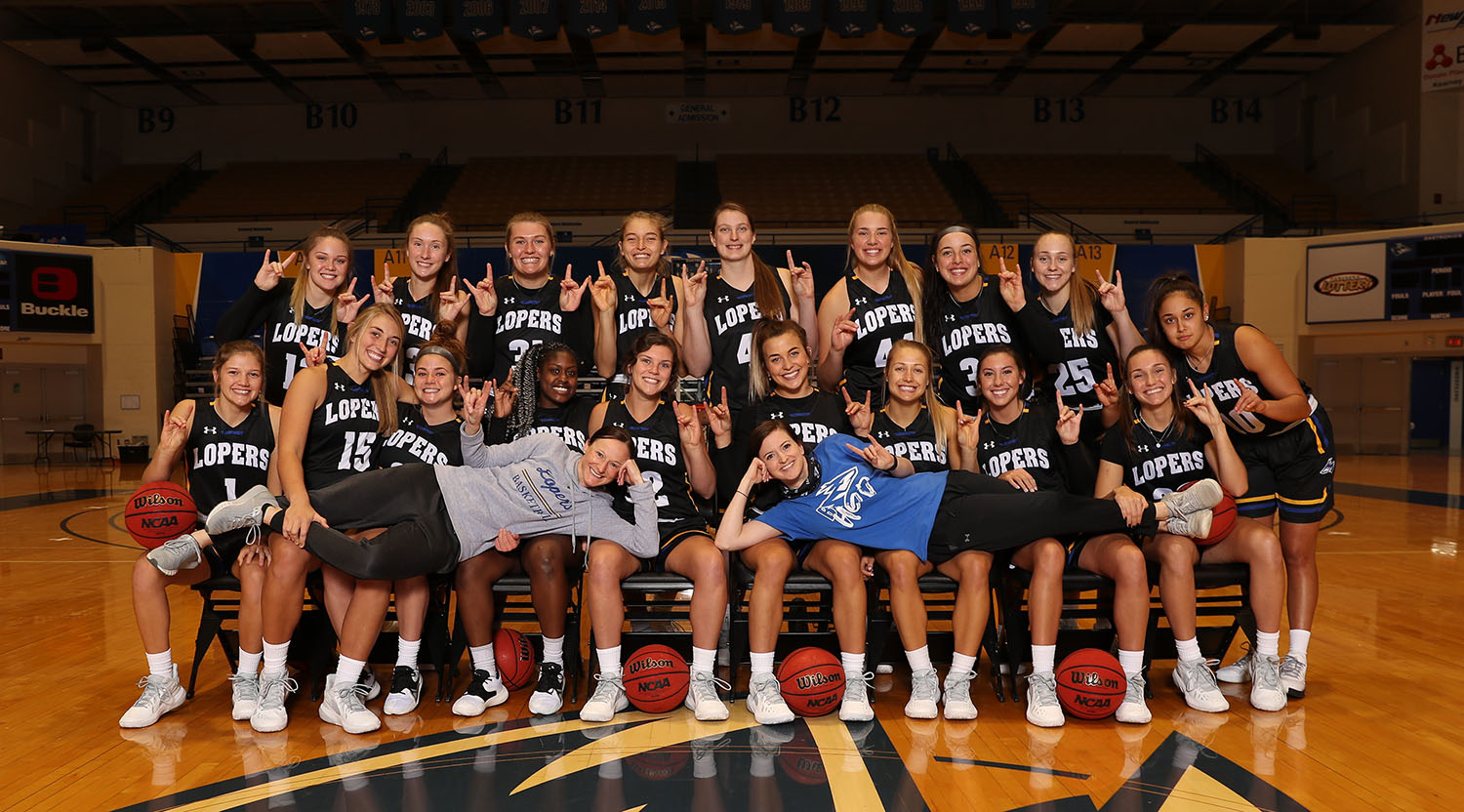 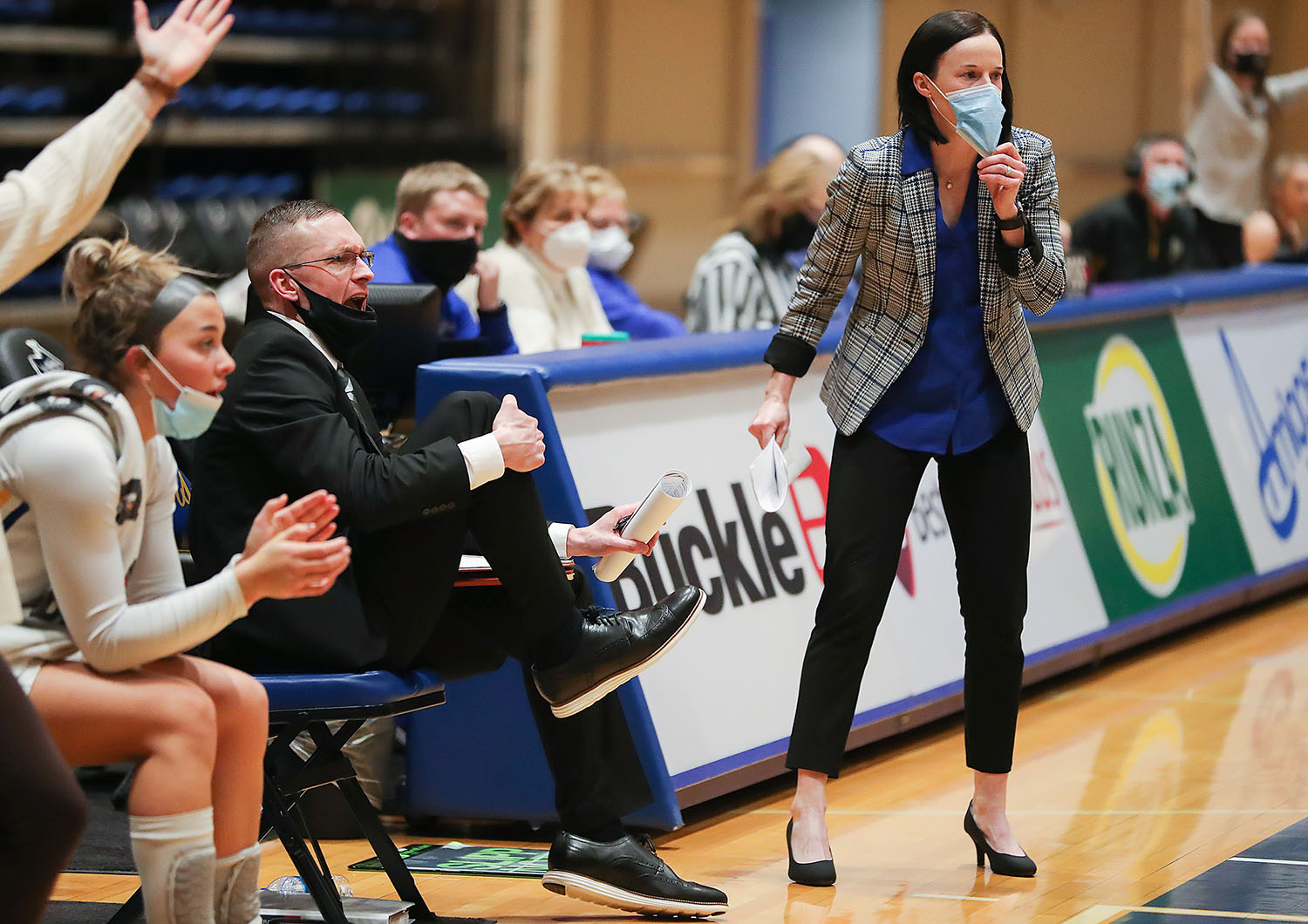 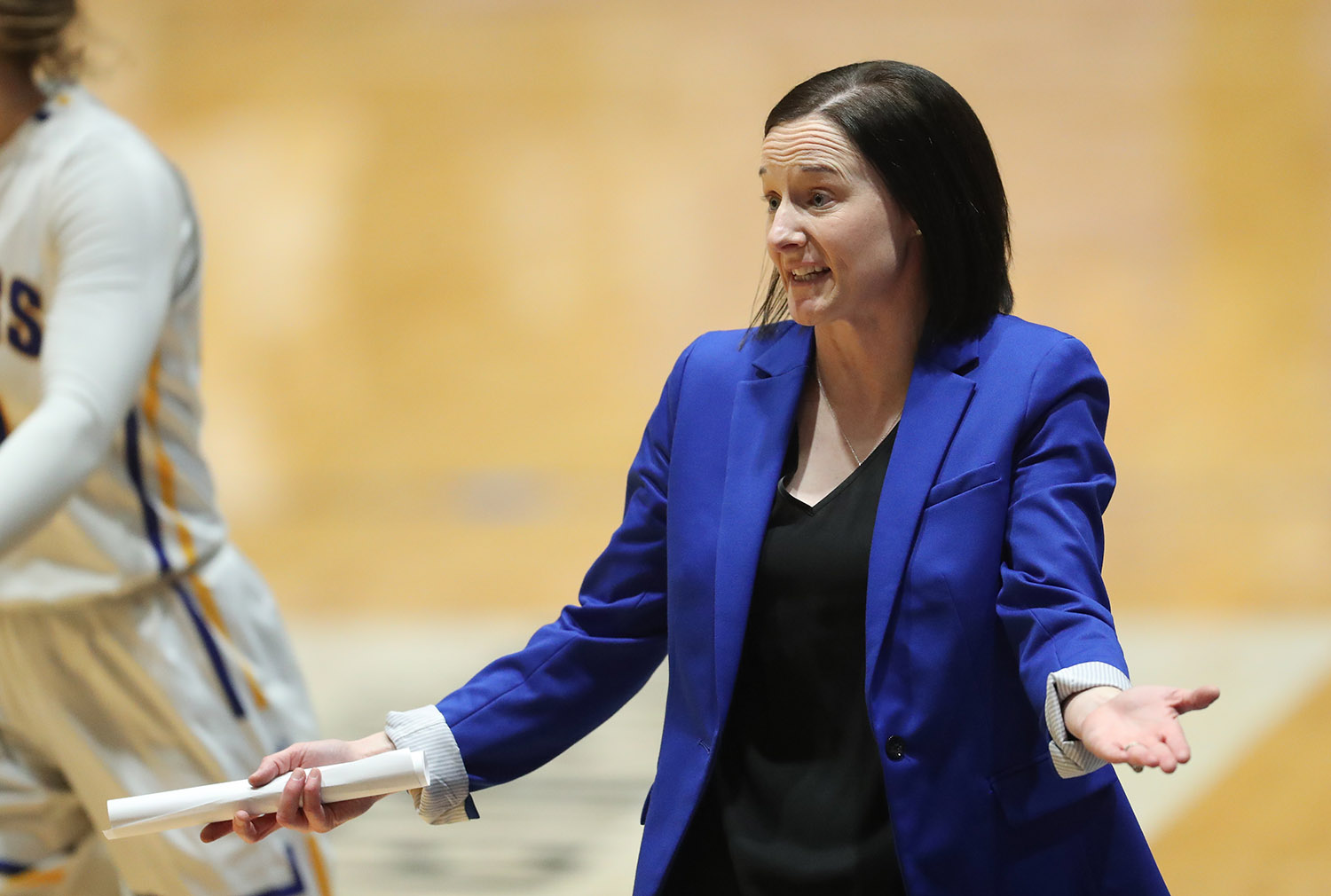 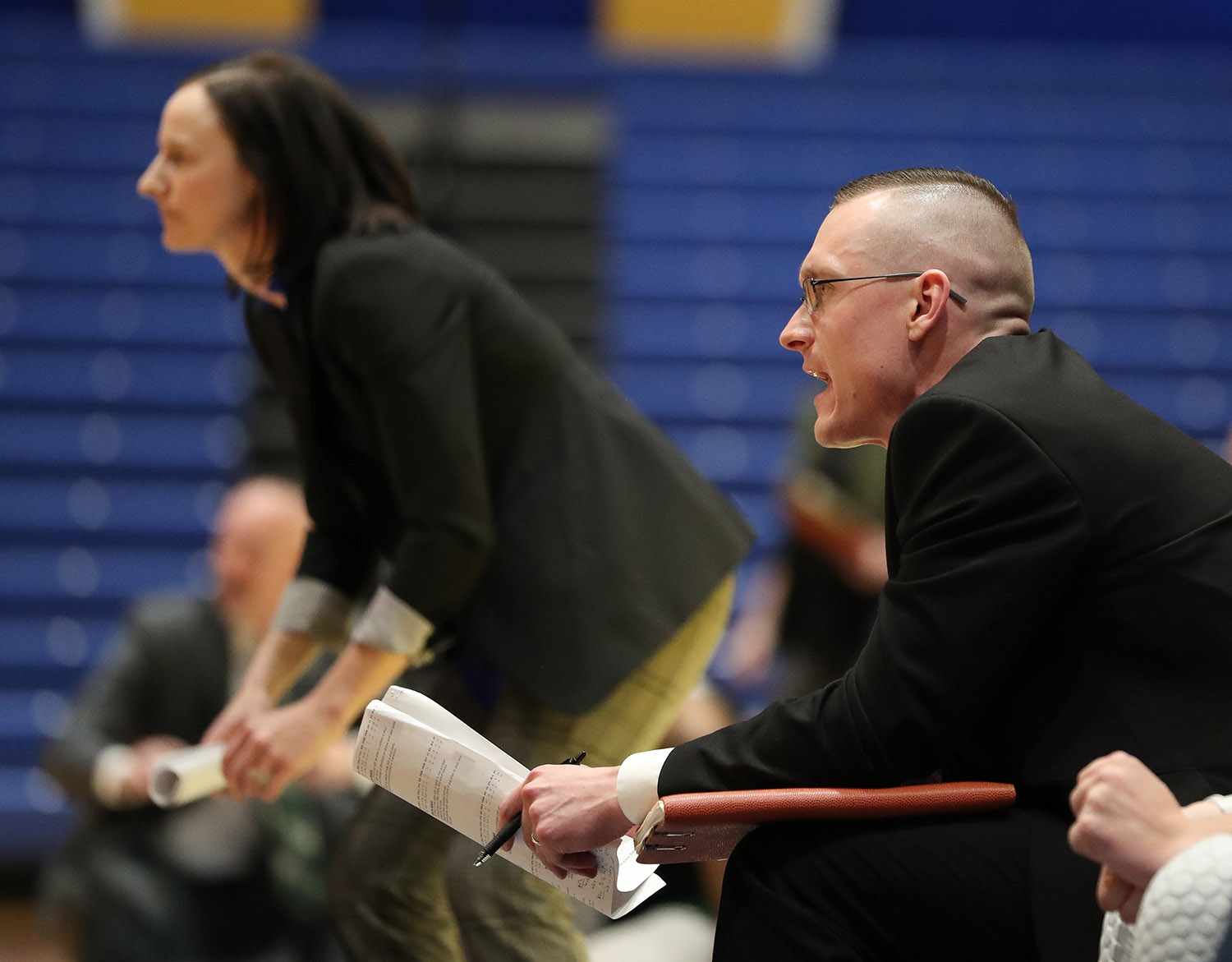