When they walk in the gym for PE class, students’ first stop is a projection screen. “Shoot baskets or walk the track,” it tells them; some head toward the hoops, while others set a brisk pace around the room.

Later, students will visit a series of movement stations, recording their cartwheels and somersaults on mobile devices and reviewing the videos to see how well they did.

At the end of class, they’ll read a question that checks their knowledge of the day’s lesson and respond using cards with unique QR codes, so their answers can be scanned later.

Where’s the PE teacher during all this? Taking attendance with a computer app, using data to assess individual effort levels and watching for chances to give students the help or encouragement they need.

Definitely not at the front of the room, blowing on a coach’s whistle.

This scenario features a lot more technology (and a lot less dodgeball) than people might expect, but it demonstrates the atmosphere Megan Adkins-Bollwitt said physical education teachers are now trying to create.

“A successful class is one where you barely notice the teacher is in it, because it should be student-centered enough that the students understand the expectations and are willing to follow those with just a little bit of teacher guidance, compared to being the teacher as the star of the class,” she said. 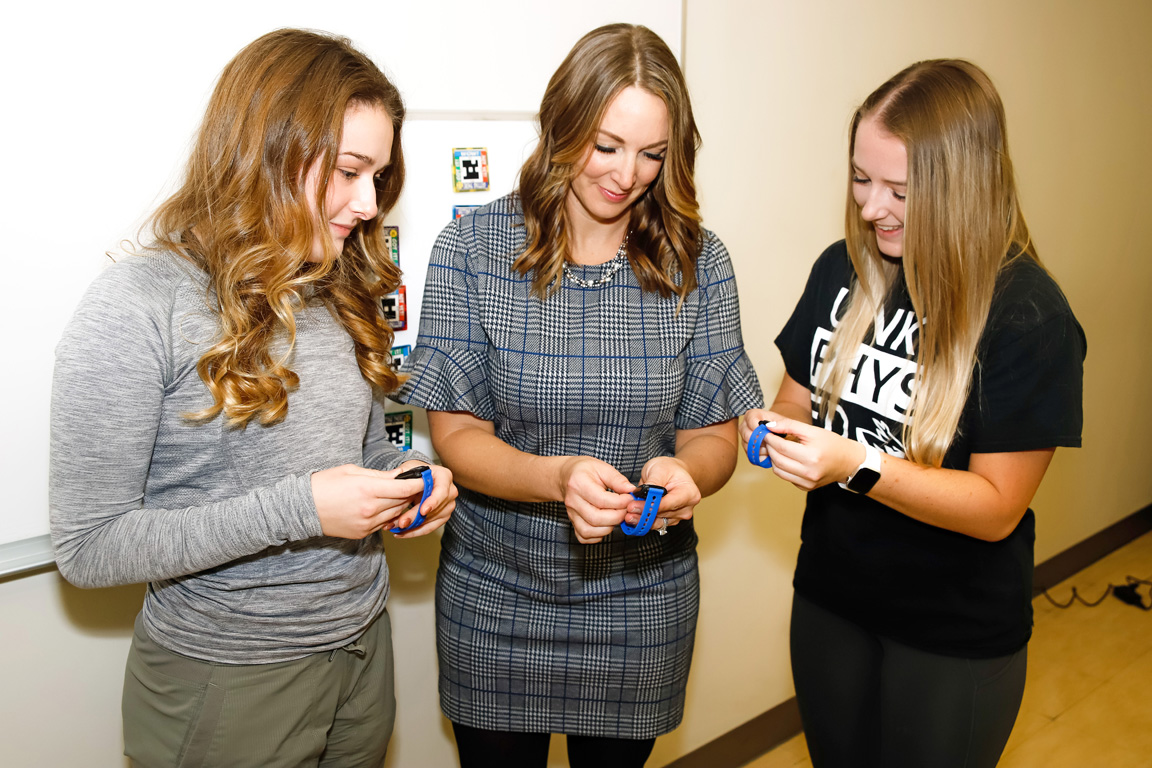 Adkins’ research and teaching promotes an expanded definition of physical education – one that engages all students, focuses on children’s entire well-being rather than just athletic skill, and takes lessons beyond gymnasium walls. And though technology has long been seen as the enemy of an active lifestyle, Adkins has embraced it as a tool that can get and keep students moving.

Since coming to UNK as a lecturer in 2008, Adkins has pushed the health and physical education program toward the profession’s cutting edge. The Home School Physical Education Teaching Lab, in which area home-schooled children visit campus for weekly classes, was just the second in the nation when Adkins developed it in 2015. Her students teach STEM-based physical education lessons at an after-school program and have led supplementary physical activities in local schools. These experiences regularly yield research data, for Adkins as well as her students. Her mentorship list is long, and she was honored in 2020 as UNK’s Undergraduate Mentor of the Year.

Adkins has been recognized with awards from the Apple Distinguished Educators program, the state and national levels of the Society of Health and Physical Educators, as well as multiple university honors.

Adkins said UNK’s program has earned a solid reputation for the way it uses – and teaches its graduates to use – technology.

“I get calls from a lot of other universities to ask how we’re doing the (technology) integration, what we’re doing. I give presentations about technology all the time. I would say our health and physical education program has worked to stay at that top level and make sure that our students understand that excellence is at a high bar,” she said. 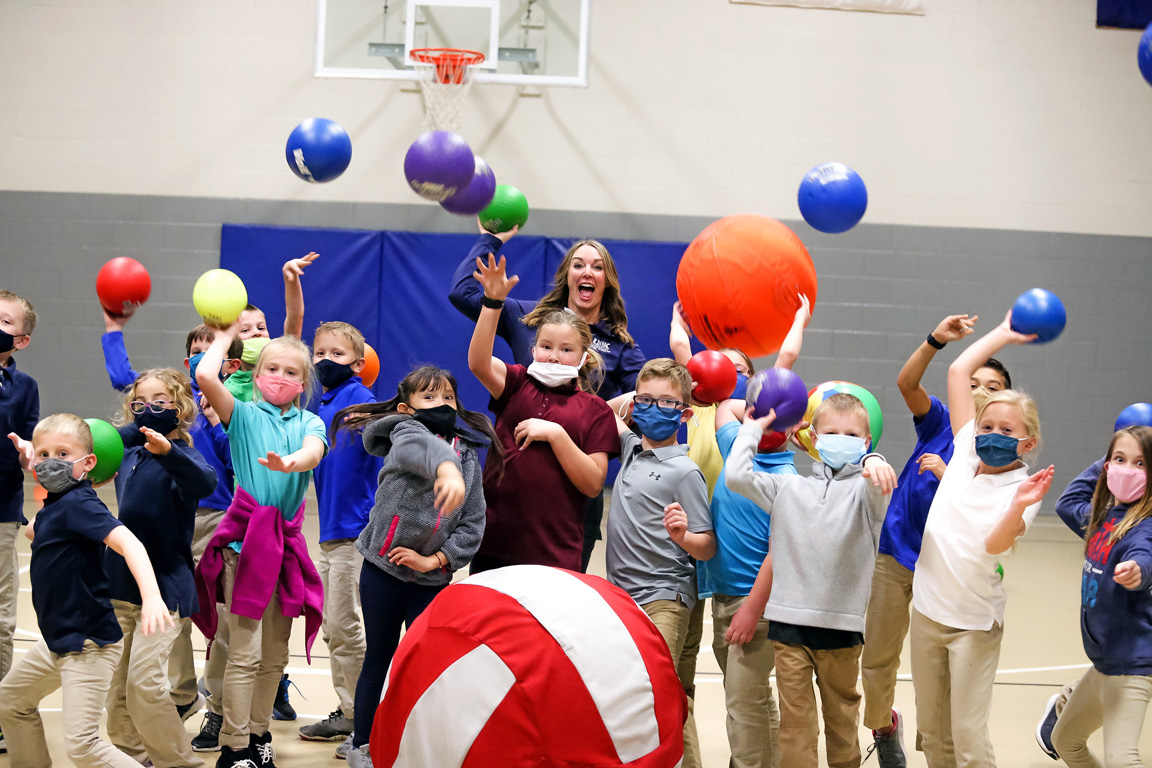 Athletic and energetic, Adkins grew up as one of those kids who loved PE class. She planned to play college volleyball until back and knee surgeries forced a change. But when she graduated from the University of Nebraska-Lincoln in 2002 with a teaching degree in K-12 health and physical education, Adkins entered a profession under pressure.

Students and teachers were racing to keep up with how technology was changing the learning process. Researchers were seeing a connection between increasing screen time and childhood obesity, yet technology was becoming a part of everyday instruction. 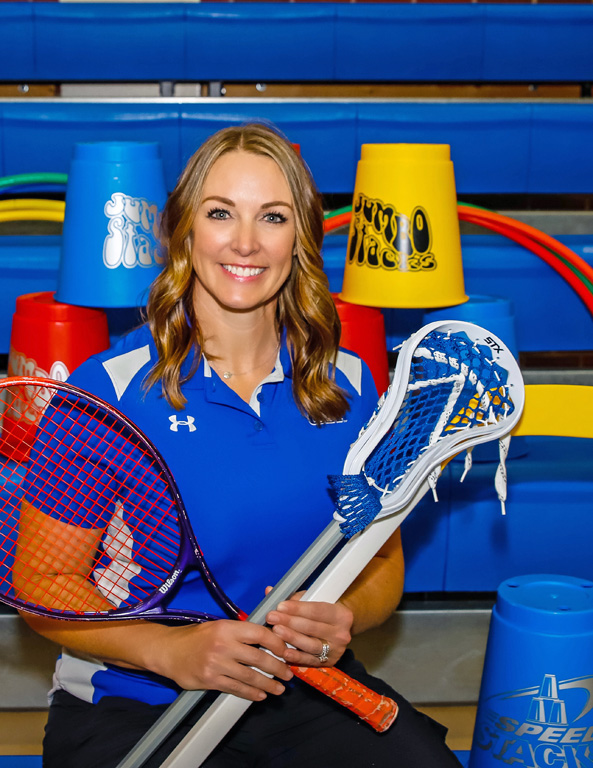 Adkins saw the challenges technology posed, but she also saw opportunity. A few years after starting work at Kearney’s Horizon Middle School, she brought in a Dance Dance Revolution video game, which challenges players to replicate the dance steps they see displayed. She was simply hoping to give students something new and interesting, but the results were surprising.

With such a positive response to the game, Adkins started incorporating more technology into her teaching and made it her research focus as a graduate student.

Adkins recalls one particular group of middle schoolers who helped change her ideas about physical education. When she had the group run or play a sport, those who looked like they were physically fit always seemed to give a lot of effort, while those who appeared out-of-shape didn’t seem to work as hard.

Then one day, she put heart rate monitors on the whole class.

That experience helped Adkins see that PE should be about more than athletic prowess. Today’s health and physical education programs are about improving lives, Adkins said, and her research has looked at ways to expand their impact.

In the last 10 years, national initiatives such as Michelle Obama’s Let’s Move! campaign and the Every Student Succeeds Act have highlighted the importance of health and wellness. The latter, signed in 2015, also freed up federal funding by designating physical education as part of a “well-rounded education.”

“We are helping (physical education) become a quality curricular area that assists in childhood obesity, social and emotional well-being and increases brain activity. All those things are research-based. Physical movement can help that. The physical education teacher is becoming a prominent figure in being able to enhance those skills for any age group, as well as the staff at a school,” Adkins said.

Access to those benefits, though, isn’t equal. Schools with more low-income students may not have the resources for strong physical education programs, and Adkins said that can have long-ranging effects. With fewer chances to develop physical skills, low-income children are less likely to reap the rewards of a healthy lifestyle.

“All my work right now is related to either low socioeconomic or rural populations,” she said, and bringing the benefits of physical activity to those students. 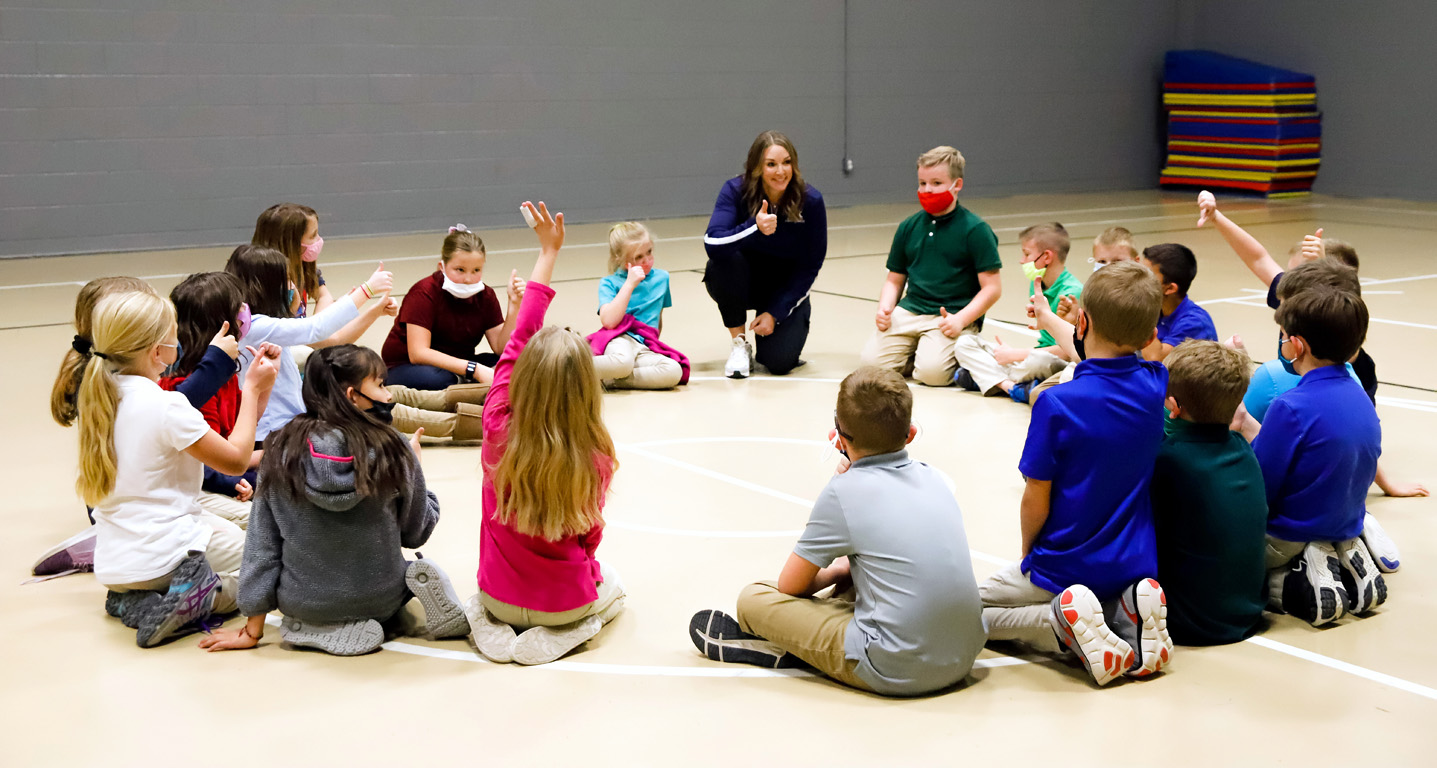 Finding new ways to incorporate physical education may help. In two studies published in 2017, Adkins wrote about a supplemental activity program in local schools. UNK education majors worked at elementary schools with a lot of low-income students. On days when the children didn’t have their regular physical education class, the UNK students led 20-minute activity sessions.

Measurements of the children’s fundamental movements and motor skills – skipping, running, jumping, throwing – showed these sessions made a big difference. In fact, Adkins said, one principal continued the program after the study ended because classroom behavior problems decreased and participation in middle school sports increased.

“That made me super-excited … proving just a small amount of physical activity to teach motor patterns to low socioeconomic students could make a difference that could change their physical well-being down the road,” Adkins said.

As physical education moves away from old models, it’s also moving into other classrooms. Adkins said a lot of her recent work connects to the national push for more instruction in science, technology, engineering and mathematics, or STEM. For example, as the Kearney coordinator for the NE STEM 4U program, Adkins creates activities for after-school programs.

“What we’ve done is integrate a lot of the STEM activity into movement,” she said, such as a recent session that used rubber balls to demonstrate Isaac Newton’s laws of motion. Third graders threw objects at balls of different sizes and quickly learned that it was easier to move the smaller balls. To make the larger balls move, they had to throw harder.

STEM is also a key part of several projects Adkins has in the works. She has applied for a $1.5 million grant from the National Science Foundation to develop “immersive technology experiences” – activities for teachers to use in conjunction with their existing lessons.

A class learning about fingerprinting, for example, may get a “Who Did It?” activity, in which they would have to perform physical tasks to correctly identify a fingerprint.

Prepared activities teachers can integrate into existing curricula are just another way to help students develop their bodies and their minds, Adkins said. Throughout her career, that’s been her goal.

“The main reason that I came to teach at the college level was I thought I was doing a good job of having an impact with my middle school students, but it was just a few kids. And if I could come to the university and assist in all these teachers going out to all these schools, then I felt I could have a bigger impact on the world of health and physical education.” 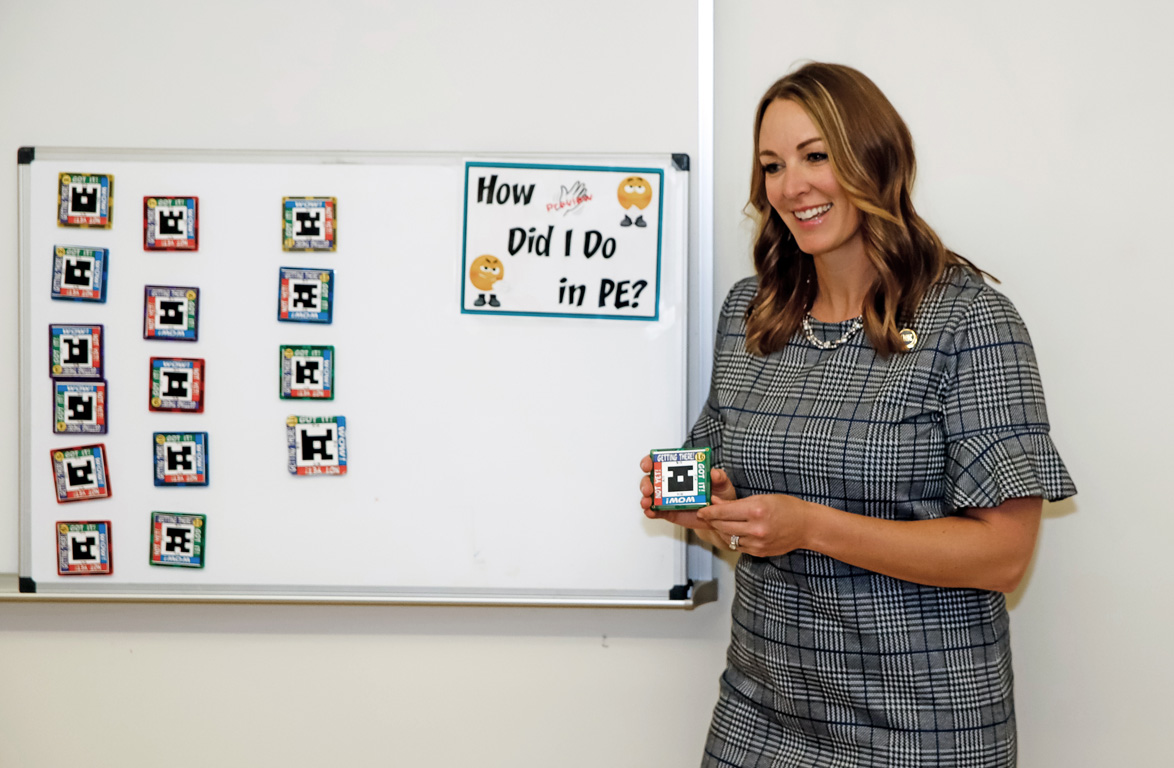 Adkins has been making technology work for the learning environment, rather than against it, for almost two decades. But it’s a challenge many teachers faced for the first time in 2020.

School lockdowns and directed health measures due to the COVID-19 pandemic brought especially big challenges for PE teachers. Adkins said many have adopted technological tools and strategies that were unfamiliar before, but will change their classrooms going forward.

One of Adkins’ current research projects looks at the impact of the pandemic on physical education programs. She interviewed health and PE teachers over the summer, asking not only how their instruction changed but how they felt about the experience. 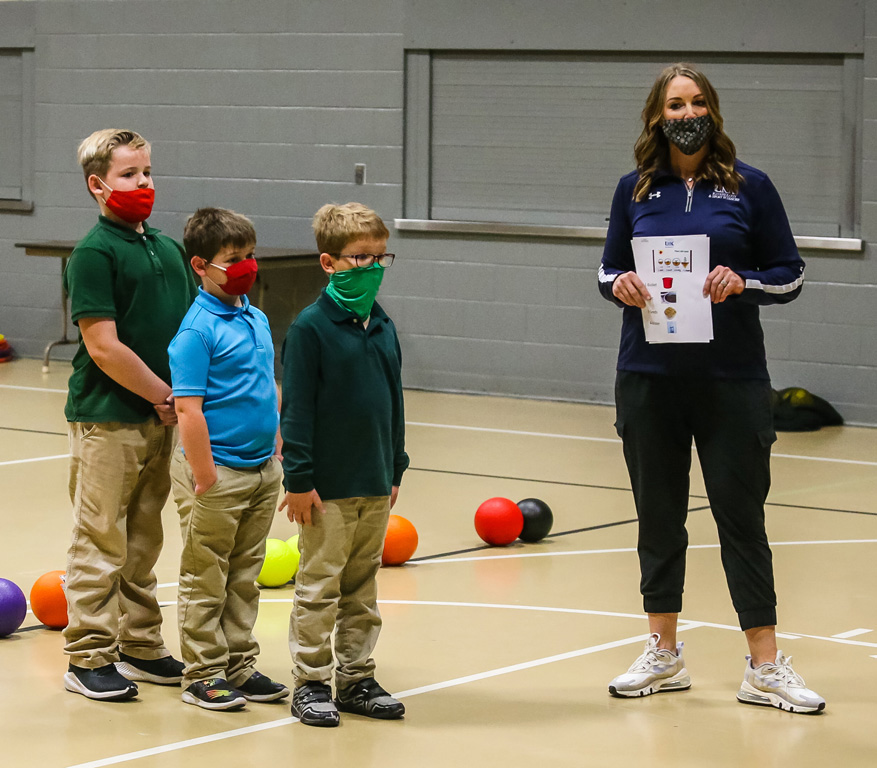 She found the teachers faced a gamut of situations and expectations. Some ran their regular classes remotely, while others couldn’t have their students do any physical activities over Zoom because of liability issues. Some were not given a designated time for their classes in the online environment but were simply expected to “jump on” during other instructors’ Zoom sessions to check in with their students.

The changes have continued into the current school year. Many teachers developed videos for online instruction. Classes had a combination of online and face-to-face students; adaptations to meet health guidelines were in some ways more challenging for physical education than for other classes.

“Teaching in the gymnasium, when you’re moving around all the time and it’s a large space, having some kids online and some face-to-face is really a huge struggle. Then you add the masks on top of that and the 6 feet (separation), so the type of activities had to completely change. You couldn’t have kids playing basketball games, because they’re within that 6 feet apart,” Adkins said.

Those challenges required teachers to expand their strategies and ideas. Fortunately, Adkins said, health and physical education professionals were able to connect online, with their students and with each other.

“The physical education health community came together to provide huge amounts of ideas. If you go onto any social media site, you’ll see numerous YouTube videos, use of PowerPoints doing fitness activities that were engaging. The sky was the limit of different things people were starting to share because they knew people were struggling,” she said. “Just giving ideas like, ‘Well, I tried this today, you can have your student pulling another student on a scooter because that’s 6 feet apart.’ Even just small things like that.”

Through her interviews, Adkins found that even teachers who ran strictly offline classrooms previously have become more comfortable with technology, and more open to its integration in their curricula. While they may not keep all the adaptations when the pandemic is over, they intend to make some changes permanent.

“There were about 50% of them who said they did not do technology before this, and now they can see that there are some benefits, and they’ll continue on with x, y and z,” she said. 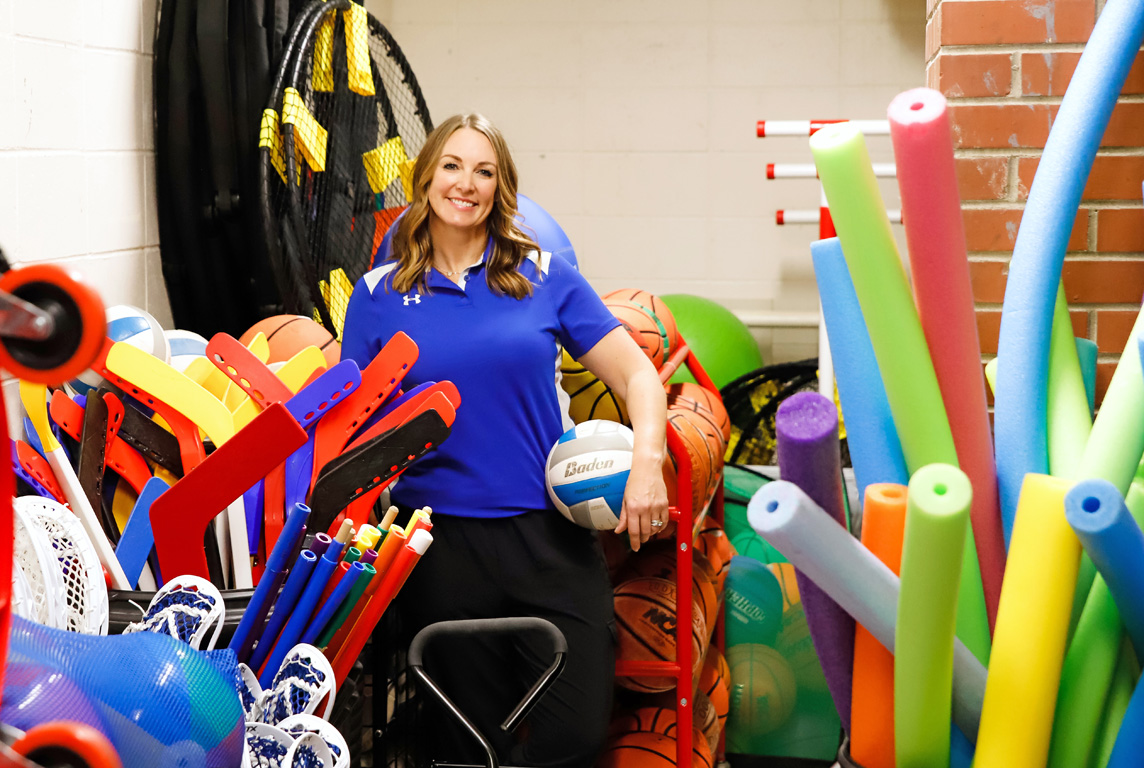