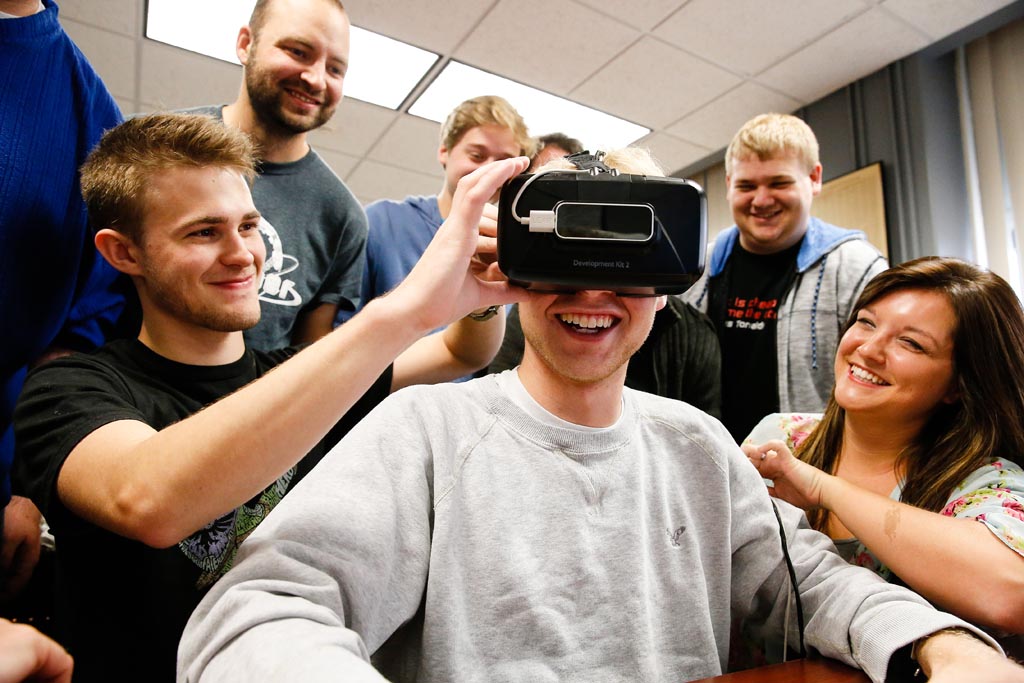 It is clear from major press coverage that virtual reality is garnering, that there is a huge amount of development interest across multiple industries, including video streaming, gaming and simulated learning. This explosion of awareness and enthusiasm from students stimulated the UNK Computer Science and Information Technology department to adopt virtual reality resources and lab space for student projects, starting in 2014.

CSIT students quickly became innovators in the virtual reality world using these resources. Each new version of VR hardware and/or software, and each new semester, brings opportunities for CSIT students to try new things and express their creativity. Additionally, each student project inspires more students to try their hands at VR development.

The first CSIT virtual reality project was a snowboarding simulation completed in 2014 by Daniel Russel as his software engineering project. It used the first generation Oculus Rift VR display for head tracking and display along with the Wii Balance Board, to control the in-game snowboard. It was developed with the Unity Engine, and used Blender for 3D modeling. A video demonstration of the game is available at https://www.youtube.com/watch?v=KjTtZWYA04g&sns=em

Sam Middleton, an Applied CS junior from Kearney, created a VR motorcycle racing game that involves a player surviving on a motorcycle while avoiding walls and an artificial intelligent agent. Players wear the Oculus Rift DK2 headset to look and feel like they are actually riding the motorcycle.

Middleton set out to improve his motorcycle racing game in the CSIT 422 Computer Graphics course.  Unfortunately, innovating in the VR world has its challenges. As he started developing the improvements of the game in the latest version of the Unity game engine, his motorcycle that worked perfectly in the previous version now moved straight up instead of straight forward. Back to the drawing board! He was able to solve this problem and also added the ability for the human player to jump over walls.

Middleton plans to further develop a commercial version of his game.

Middleton continued, “As these virtual reality devices are created by Microsoft, Sony, Samsung and Google, there will be a high demand for software compatible with these devices.”

Lim also continued his VR work in the fall 2015 semester and created a 3D explorable world for his CSIT 422 Graphics class project. In this world, the user enters an elevator to go to different floors, which each containing a new world to explore.

Matt Lueck and Ben Bomberger, CS Comprehensive seniors from Kearney, tried their hand at creating a virtual reality project in their Senior Capstone course, as they developed a VR 3D boxing game for the Oculus Rift. It was built using Unity with Leap Motion, using Blender for the 3D modeling.

The Leap Motion allows the VR system to “see” the player’s hands. Unfortunately for Lueck and Bomberger, it only recognizes a hand when all five fingers were visible. This made it difficult to see the player’s fist, as needed for their boxing game. Their game turned into more of a “slapping” game.

The first commercial release for the Oculus Rift is now available for pre-order, with shipment sometime in July. The Oculus Touch, which is a handheld tracked controller that brings the player’s hands fully into VR, is planned for release in fall 2016. This technology will allow Lueck and Bomberger’s boxing game to function more realistically.

Virtual reality will be a major contributor to new technologies and innovations for years to come. The UNK CSIT Department plans to stay on the leading edge of this field, proving the tools and resources needed to inspire student creativity and innovation so they can be successful in their VR classroom projects – enabling them to be successful entrepreneurs in virtal reality. 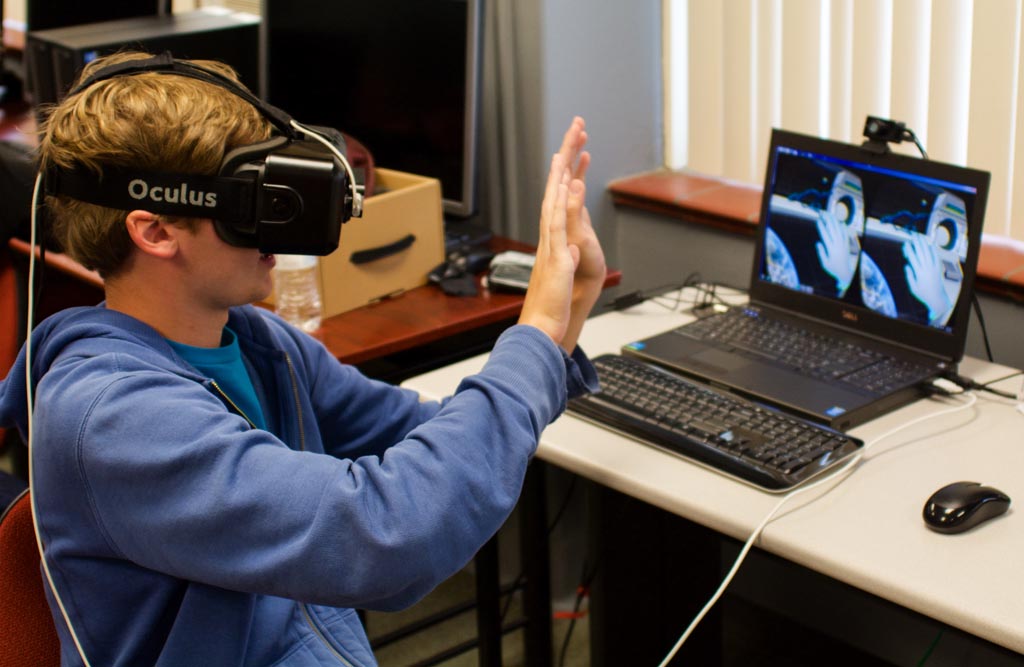