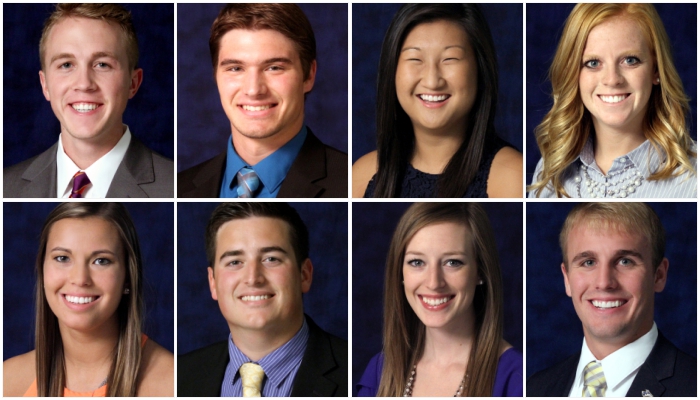 KEARNEY – Eight finalists for homecoming royalty at the University of Nebraska at Kearney were announced Monday.

The king and queen will be crowned at 9 p.m. Thursday at the Health and Sports Center. They also will be recognized during halftime of UNK’s football game against Central Missouri at 3 p.m. Saturday and oversee other homecoming week festivities.

Finalists were selected by student vote. The final round of voting takes place this week.

Taylor Kittle, Alpha Phi – A senior from Aurora, Kittle is double majoring in elementary education and early childhood development unified. She is involved in the Alpha Phi sorority, where she has served on the executive board for two years. Kittle has been a student diplomat for four semesters and was a New Student Enrollment Leader this summer. She is also a member of Loper Liaisons, Mortar Board, and has been on the dean’s list the past six semesters.

Molly Osterberg, Gamma Phi Beta – A senior from Kearney, Osterberg is majoring in family studies with a minor in early childhood development unified. She is current membership vice president for Gamma Phi Beta and organized and led recruitment this year. She is also alumni relations chair for Mortar Board, and community outreach chair for the Council on Family Relations. Osterberg is also a member of Gold Torch Society and Order of Omega.

Carrie Prososki, Alpha Xi Delta – A senior from Kearney, Prososki is majoring in elementary and special education. She is currently vice president of Order of Omega, UNK Cheer squad captain, and New Member Orientation chair for Alpha Xi Delta, in which she has also served as chapter President. Prososki is a member of Phi Eta Sigma, Kappa Delta Pi, Loper Programming and Activities Council, and Elementary Education Club. She is also an executive member on Panhellenic Council, cabinet member for Student Government and a Loper Leader. Prososki is actively involved in intramurals and has been on the dean’s list since 2012.

Shelby Rust, Alpha Omicron Pi – A senior from Gretna, Rust is majoring in international studies with minors in public health and Spanish. She is currently president and re-founder of Amnesty International on campus, fundraising chair for St. Jude Executive Board, and communications director for Mortar Board. Rust has held numerous positions in her sorority, as well as having been a Student Diplomat and New Student Enrollment Leader. Rust has been to Haiti three times for mission work and will study abroad in Peru next semester.

Landon Killion, Phi Delta Theta – A senior from York, Killion is majoring in sports management with a minor in marketing/management. He is currently secretary of community relations for Student Government, as well as president for Phi Delta Theta. Killion previously served as a mentor for the Thompson Scholar Learning Community and was a resident assistant in his fraternity house.

Joshua Lallman, Sigma Phi Epsilon – A junior from Omaha, Lallman is majoring in biology (pre-med) with a minor in health care management. He is an Omaha World-Herald/Kearney Hub Scholarship winner and member of the UNK Honors Program. Lallman played two years on the UNK basketball team and actively works as president of Sigma Phi Epsilon. In addition, he was a 2015 New Student Enrollment Leader and worked as a Student Diplomat in the Admissions Office. He currently serves as a Chancellor’s Student Ambassador and is a member of Mortar Board, Undergraduate Research Fellows program and Volunteers Around the World.

Tyson Lanka, Mortar Board – A senior from Ogallala, Lanka is majoring in business administration with an emphasis in finance. He is currently president of Order of Omega, coordinator for the 2015 Chancellor’s Student Ambassadors, and was given the 2015 UNK Outstanding Unsung Hero Award. He is also a member of Mortar Board, Beta Gamma Sigma and Sigma Phi Epsilon Fraternity. Lanka is also on the College of Business and Technology Advisory Board and resident assistant for the current school year.

Wyatt Schake, Phi Gamma Delta – A senior from Amherst, Schake is majoring in exercise science with a minor in health science. He is an active member in Phi Gamma Delta, where he is corresponding secretary/external relations chair. Schake is also involved in Loper Programming and Activities Council, Chemistry Club, and he was a Loper Leader this year.