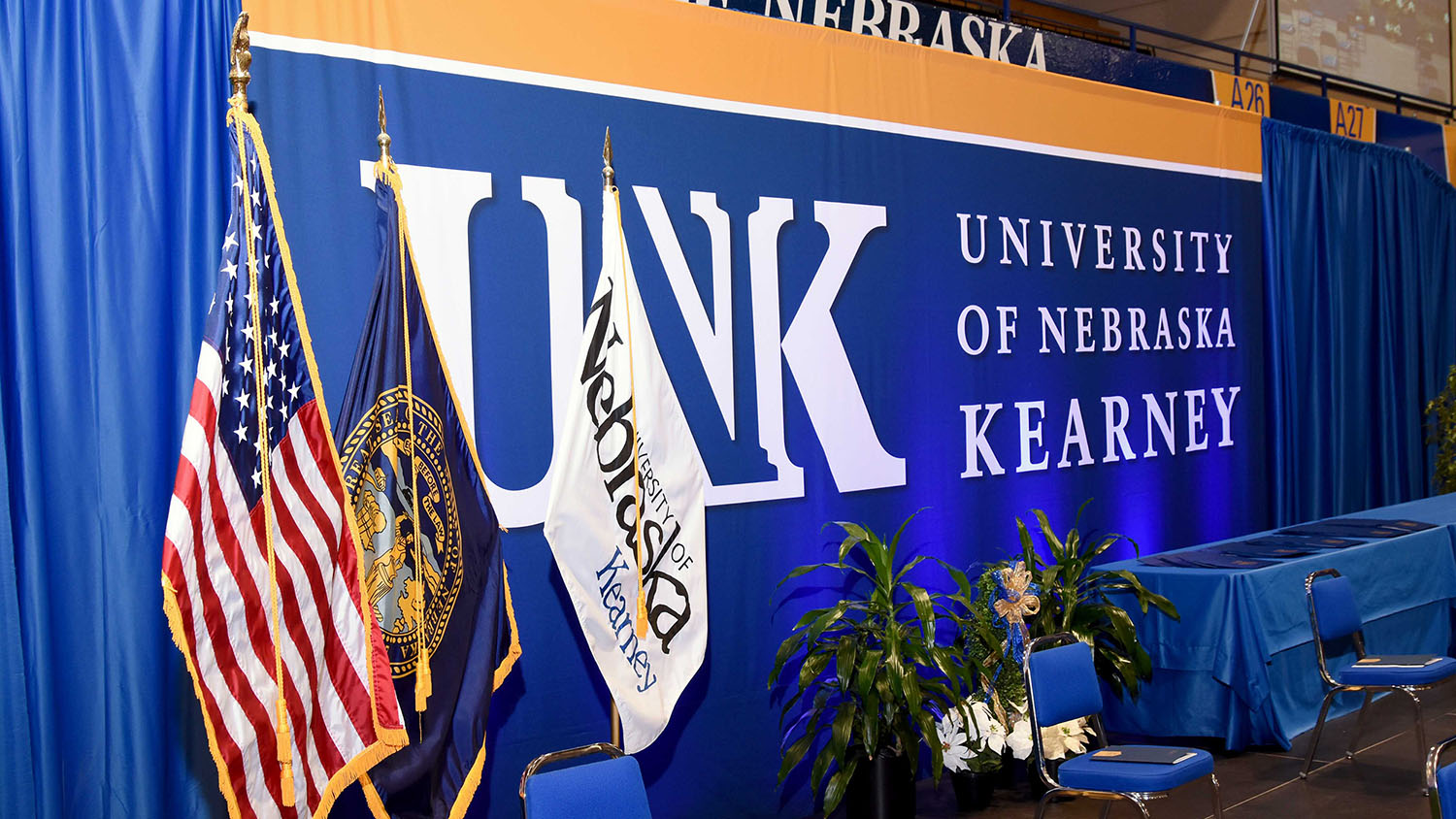 Undergraduate exercises
When: 10 a.m. Friday, May 7
Where: UNK Health and Sports Center

Graduate exercises
When: 10 a.m. Saturday, May 8
Where: UNK Health and Sports Center

Live broadcast: Watch commencement live and join in the #lopergrad conversation at http://unk.edu/eventdashboard

KEARNEY – Undergraduate and graduate degrees for 685 students will be conferred during University of Nebraska at Kearney spring commencement exercises.

Undergraduates will be recognized 10 a.m. Friday, May 7, and a separate graduate-degree hooding ceremony is scheduled for 10 a.m. Saturday, May 8. Both ceremonies will be at UNK’s Health and Sports Center, with doors opening at 8:30 a.m.

There is no restriction on the number of guests students can bring to either ceremony. All attendees and participants must wear face masks.

Individuals planning to attend are asked to monitor themselves for symptoms and stay at home if they are feeling ill or have been in recent contact with someone with COVID-19. Those who are unable to attend in person may watch the ceremonies via livestream on UNK’s website. A recording can also be viewed later on the website.

Chancellor Doug Kristensen will award degrees at both ceremonies.

William “Bill” Jackman, chair of the University of Nebraska Foundation Board of Directors and senior vice president of investments for UBS Financial Services in Dallas, Texas, will deliver the undergraduate commencement address.

A native of Grant, Jackman graduated from the University of Nebraska-Lincoln in 1986 and played basketball for the Huskers before joining professional teams in the U.S., Spain, New Zealand, Venezuela, Colombia and Mexico. He earned a Master of Business Administration from the University of Chicago Booth School of Business in 1995 and for the past 27 years has worked in finance and wealth management for UBS, Goldman Sachs and Morgan Stanley.

A trustee of the University of Nebraska Foundation since 2000, Jackman joined the board of directors in 2012 and was elected to a two-year term as board chair in October 2019. He also served for 12 years on the board of directors of the Cotton Bowl Athletic Association in Dallas and currently is a member of the Cotton Bowl Foundation Board of Directors.

A recipient of the UNK Alumni Association Outstanding Senior award, Daubert was involved in the UNK Honors Program, Mortar Board honor society and Alpha Epsilon Delta health preprofessional honor society. He was coordinator of the Chancellor’s Ambassadors, president of the Interfraternity Council and vice president of the Sigma Phi Epsilon fraternity.

Daubert was also involved in UNK Student Government and he served as a summer camp counselor for the Muscular Dystrophy Association and medical outreach volunteer for Volunteers Around the World in Panama. He works as a phlebotomist at Kearney Regional Medical Center.

Daubert will attend the University of Nebraska Medical Center College of Medicine this fall.

Pete and Jane Kotsiopulos of Kearney are receiving the Ron and Carol Cope Cornerstone of Excellence Award. They will be recognized during Friday’s ceremony.

A native of Brady, Clouse attended Mid-Plains Community College and Kearney State College. He’s been employed as an account manager for Nebraska Public Power District since 1978. Clouse was elected to the Kearney City Council in 2003 and he’s served as mayor since 2006. He’s also a member of the League of Municipalities Executive Board of Directors and Legislative Committee, and he’s involved in a number of state and community organizations, including the Nebraska State Chamber of Commerce, Great Platte River Road Archway Board of Directors, Buffalo County Economic Development Council Board of Directors, Make-A-Wish Foundation of Nebraska, Kearney Area Chamber of Commerce and Leadership Kearney.

Clouse has hosted UNK international students from Denmark, Japan, Benin and the Bahamas and contributed financially to campus programs. He serves on the UNK Center for Rural Research and Development Advisory Council and is a past recipient of the Cope Cornerstone of Excellence Award and Friend of Social Work Award.

Breanna Redl of McCook will give the graduate reflection. She received a bachelor’s degree in communication disorders from UNK in 2018 and is graduating Saturday with a master’s degree in speech-language pathology.