KEARNEY – With her high GPA, near-perfect ACT score and impressive extracurriculars, Ella Buhlke had her pick of prestigious schools across the Midwest.

She chose the University of Nebraska at Kearney, largely because of her relationship with biology professor Kim Carlson.

“She’s one of my biggest role models,” said Ella, a freshman pre-medical student. “As a woman in STEM, it’s important to see other women in STEM who are strong, independent and successful in their careers. It’s really nice to work with her and observe her in that way.”

Carlson, a co-chair in the UNK Department of Biology, has mentored Buhlke since 2019, when she was a sophomore at Central City High School. A shared interest in science and research – and a friendship formed at UNK nearly three decades earlier – brought the two together.

The email came out of the blue.

Carlson immediately recognized the name. Brian Buhlke was a classmate when she and husband Darby, a senior lecturer in the Department of Biology, were both students at UNK. She also worked with Brian’s wife Amy, another UNK graduate, at the local Walmart.

“We had a lot of good times together,” Carlson recalled.

But they hadn’t spoken in years.

Brian went on to medical school, Amy worked as a physical therapist and the couple settled in Central City, where he’s a family physician and medical director at Merrick Medical Center and vice president of the school board. Naturally, their oldest daughter Ella fell in love with health sciences, too.

To prepare for college – and eventually medical school – Ella wanted to conduct research she could present at science fair competitions.

“Research is one of the things med schools will really look at on a resume,” Ella said. “If you have that experience, it’s definitely a plus for you.”

Looking to give his daughter a leg up, Brian reached out to his former college classmate, who was more than willing to help.

“Every year, she got a bigger project,” said Carlson, who was impressed with Ella’s intelligence and work ethic.

“I want to work with people who enjoy science and get excited about science. That’s Ella,” she said. “She’s committed to this process, and she’s a very good presenter and writer.”

She credits Carlson and other members of the UNK team for making research enjoyable and engaging.

“It’s not a relationship where I’m told what to do and I do it. It’s very collaborative,” Ella said. “Dr. Carlson is a really great person to work with and she makes the whole process more fun. Everyone in the lab here is really supportive of each other.”

That’s why she decided to attend UNK after graduating from high school.

“I was worried that if I started over with someone else, I wouldn’t have that same relationship,” Ella said.

A biology major with a health science emphasis, Ella is part of the UNK Honors Program, which covers her room and board and books, and the Kearney Health Opportunities Program, which awards full-tuition scholarships to future health care professionals who plan to practice in rural Nebraska. She received a full-tuition Board of Regents Scholarship, as well.

Ella also competes on the Loper track and cross country teams and, of course, continues to conduct research with Carlson through the Undergraduate Research Fellows program, which provides a $1,200 annual stipend for participating students.

In November, the research she completed during high school was featured in Life, an international, peer-reviewed journal published monthly online by MDPI. The article, “Characterization of Cross-Species Transmission of Drosophila melanogaster Nora Virus,” focuses on an RNA virus first discovered in fruit flies in 2006 and its ability to infect other species of invertebrates.

“It was really nice to see three years of work throughout high school pay off in that way. That’s something that will be on my resume forever. Publications don’t go away. Publications are permanent. It’s something I can always look back at and say, ‘Yep, I was published as a 19-year-old in my freshman year of college,’” said Ella, who worked on the project with Gillan, Kim and Darby Carlson, UNK biology lecturer Alexis Hobbs and graduate students Blase Rokusek and Sunanda Rajput.

Ella will present their findings in March at the Genetics Society of America’s annual Drosophila Research Conference in Chicago. She’s currently using fruit flies to study an antibiotic that has the potential to treat viral infections and excelling academically as a dean’s list student who’s already taking upper-level biology courses.

“It means a lot to me that she chose to come here so she could continue doing research,” Carlson said. “She had a lot of options she could have picked, and I feel very honored that she decided to come here and work with me.”

As an added bonus, Ella’s younger sister Addie, a junior at Central City High School, is conducting research with Carlson now, too. 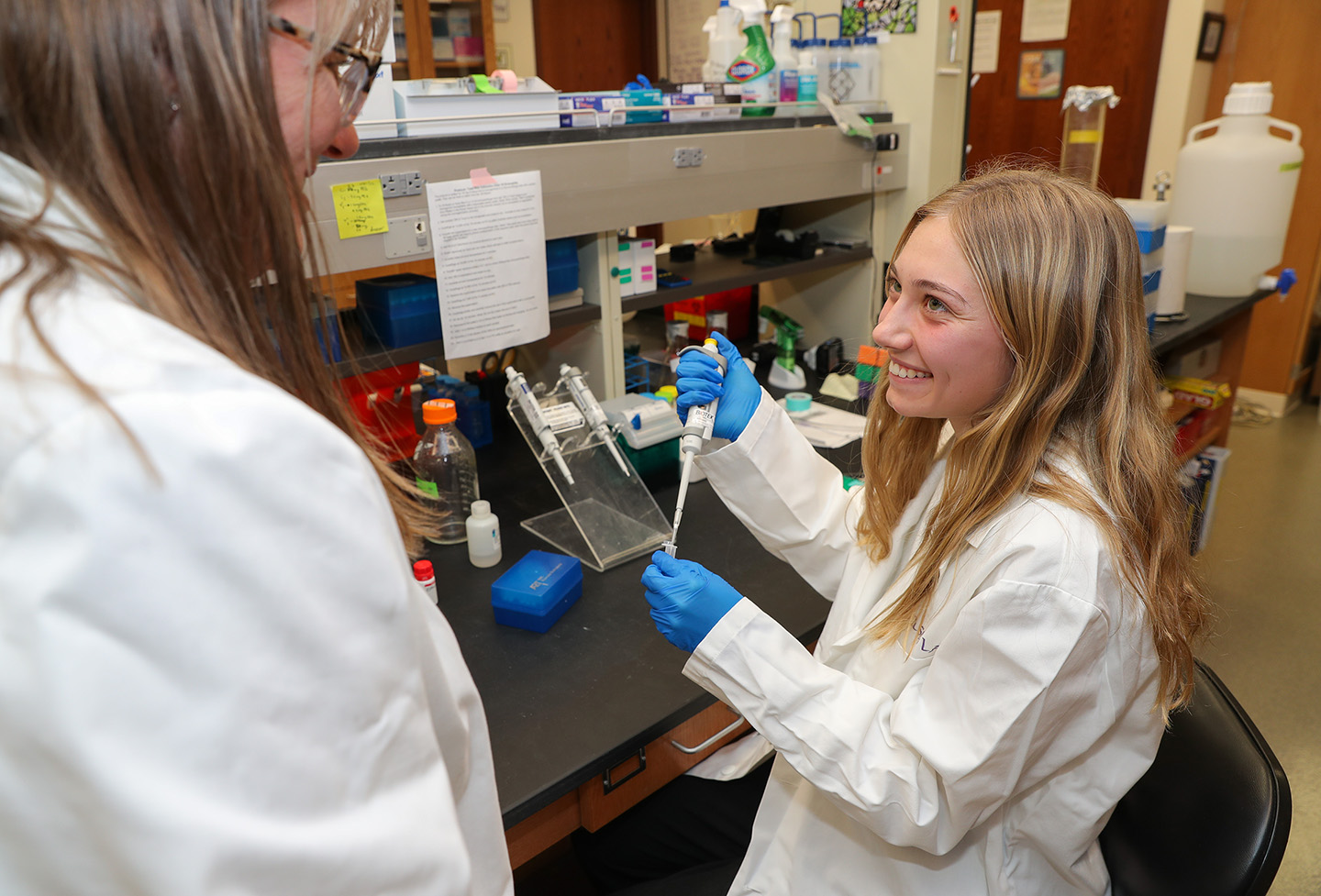