You are here: Home / College of Education / UNK impacts education across Nebraska; 1 in 7 teachers are Lopers
Post Views: 4,933 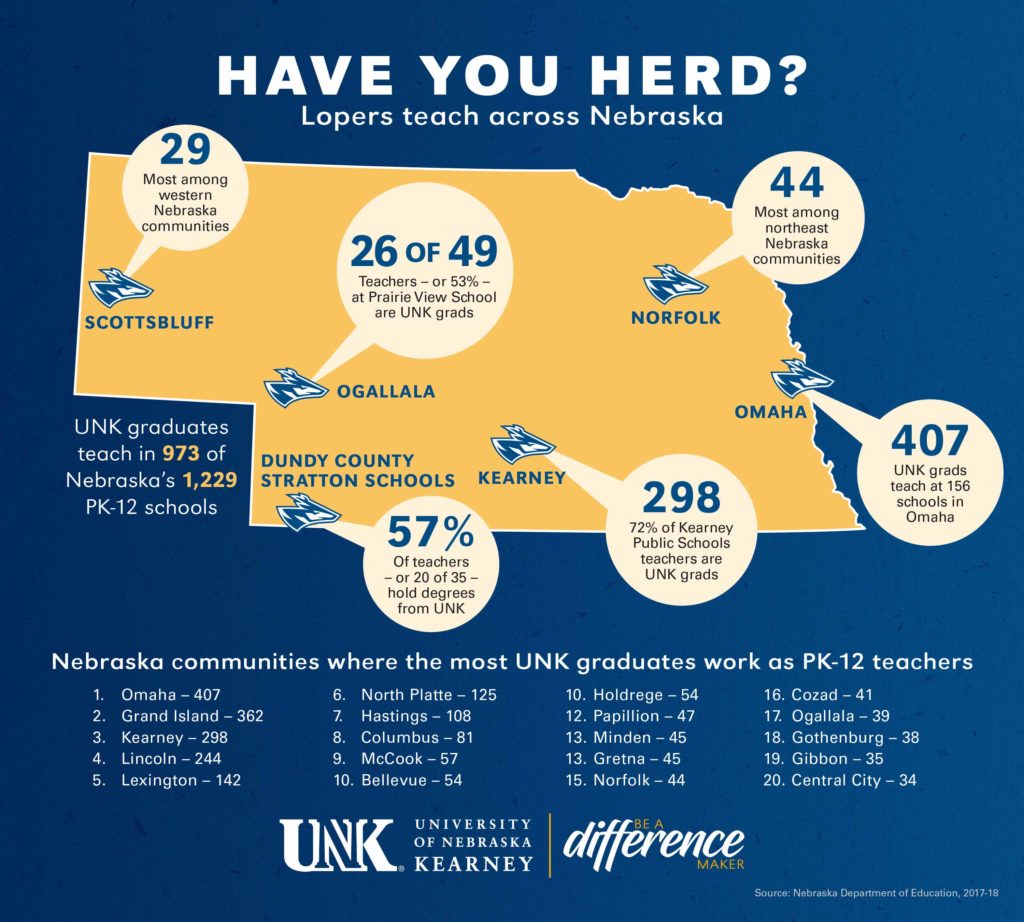 KEARNEY – You’ll find them in nearly 300 communities across the state – from Ogallala to Omaha, Scottsbluff to South Sioux City and points in between.

They’re teaching in small towns in the heart of cattle country and urban areas within the “Silicon Prairie.”

When it comes to PK-12 education, the University of Nebraska at Kearney has the Cornhusker State covered – literally.

More than 4,300 UNK graduates work as PK-12 teachers in Nebraska, according to a 2017-18 report from the Nebraska Department of Education. Roughly 1 in every 7 Nebraska teachers holds at least one degree from UNK, and Lopers serve almost 1,000 of the state’s 1,229 schools.

Many of these graduates studied on the UNK campus. Others completed the university’s top-notch online programs. They all became educators for the same reason – to make a difference in the lives of children and impact future generations.

“I had fantastic teachers in elementary, middle and high school who encouraged my passions, and I wanted to do the same thing for kids,” said Cassie Olson, an English and history teacher at Boone Central High School in Albion.

Olson, an Albion native who graduated from Boone Central in 2004, chose to attend UNK as a way to branch out and meet new people in a city two hours from her hometown.

“UNK is both big enough and small enough,” Olson said. “The class sizes were smaller and the professors knew you by first name. You just felt like they cared about you.”

“As a community,” she added, “Kearney has so many cool opportunities, especially for somebody like me who came from a town of 1,600.”

While the culture and UNK’s extracurricular activities allowed Olson to get outside her comfort zone and experience personal growth, the teacher education program prepared her for her professional goals.

UNK’s teacher candidates get in the classroom early and often, providing numerous opportunities to work directly with PK-12 students and learn from educators in the field.

“The program gives future teachers a chance to figure out what’s the right fit for them,” said Olson, who completed a practicum at a Kearney middle school before deciding high school education was her preferred path.

Olson earned a bachelor’s degree in secondary education with endorsements in English, history and coaching in December 2008, then completed UNK’s online Master of Arts in history program in 2013.

After 10 years at Boone Central – home of the Cardinals – Olson still “bleeds blue,” as one student said of her dedication to UNK.

“I loved my time at UNK,” Olson said. “The university gave me many tools I still use in the classroom, as well as long-lasting friendships.”

‘THE BEST MOVE I’VE EVER MADE’

The North Platte native originally earned a degree in business administration and entered the workforce before reconsidering his career choice.

“Dr. Shirley Houston was instrumental in getting me to pursue a career in business education. She was the one who said, ‘Doug, you need to go into education,’” Kittle said of the former assistant professor and business education program coordinator at UNK.

Kittle called the teaching endorsement he later received “the best move I’ve ever made.”

“She impacted my life more than she probably ever realized,” he said of Houston.

Kittle started his teaching career in Newman Grove, where he worked for five years before landing at Aurora Public Schools. He advanced from the classroom to assistant principal then principal during his 22 years in Aurora, spending the past 16 years in his current position.

As a high school principal, Kittle isn’t shy about promoting UNK’s teacher education program, which he describes as “second to none.”

“If I have students from Aurora High School who are thinking about education, I encourage them to take a look at UNK. What they’ve done in the last 10 to 15 years with their education program, it’s top-notch,” said Kittle, who also earned his master’s degree in educational administration through UNK. His wife Steph, a math and reading teacher at Aurora Middle School, and daughter Taylor, a third grade teacher at Emerson Elementary School in Kearney, are UNK graduates, as well.

“When I see a resume come across my desk and they’ve gone through the UNK teacher education program, I know it’s going to be a quality candidate,” Kittle said. “They’re putting out a great product. UNK students come out of college and they’re ready to get in the classroom and go to work.”

Twenty-nine UNK graduates teach at Aurora Public Schools, according to the 2017-18 report, representing 30% of the district’s total teachers.

UNK graduated nearly 250 teacher candidates during the 2018-19 academic year and more than 400 students are currently admitted to the program.

That pipeline is crucial in a state where schools face teacher shortages in several areas.

“There’s a huge need,” said Olson, who has witnessed Boone Central’s struggles to fill certain positions. “There are a lot of teachers getting to retirement age.”

Olson believes UNK can play a significant part in addressing that issue.

“There are a lot of people who go to UNK who want to give back to their state and their communities, so they stay,” she said. “I feel like the University of Nebraska at Kearney encourages people to give back.”

“It really seems like UNK is the primary source of teacher and principal candidates across Nebraska,” Kent said. “The ones who want to move back to rural areas are the ones who went to UNK.”

At Dundy County Stratton, a southwest Nebraska district with three schools, more than half of the 35 teachers are UNK graduates, according to Nebraska Department of Education figures. Kent, who has been with the district for 30 years, including 23 as an administrator, holds three degrees from UNK, as does his son Matt, the K-12 principal at Brady Public Schools.

UNK alumni teach in 280 Nebraska communities, according to the 2017-18 report, with many of them accepting jobs before they graduate.

Others, like Loree Cain, discover their passion for teaching later in life.

Cain graduated from UNK in December 2002 with bachelor’s degrees in Spanish and public relations, then worked in marketing for four years in Denver.

A year after she and her husband moved to her hometown of Ogallala to raise their family, she was hired as a Spanish teacher at the local middle school and enrolled in UNK’s Transitional Certification Program. The online program, which Cain completed over two years, provides an alternative pathway for individuals with a bachelor’s degree or higher who want to become certified teachers.

Through the program, Cain was able to start working in the classroom while gaining additional skills and “teaching wisdom” and earning her state certification.

“I’m grateful for UNK’s Transitional Certification Program as it enabled me to take the knowledge I already had and turn it into an entirely new career,” said Cain, who considers education to be her “true calling.”

“We have a shortage of good teachers, and teaching truly is such a rewarding profession,” she said. “That’s why I think the Transitional Certification Program is so valuable, because it enables people to make a change in their profession to something much more rewarding.”

Next fall, Cain will begin her 10th year with Ogallala Public Schools. She’s currently a Spanish, reading and media production teacher and English language learner coordinator at Prairie View School, where 50% of the teachers are UNK graduates.

“I know I’m right where I’m supposed to be,” Cain said. 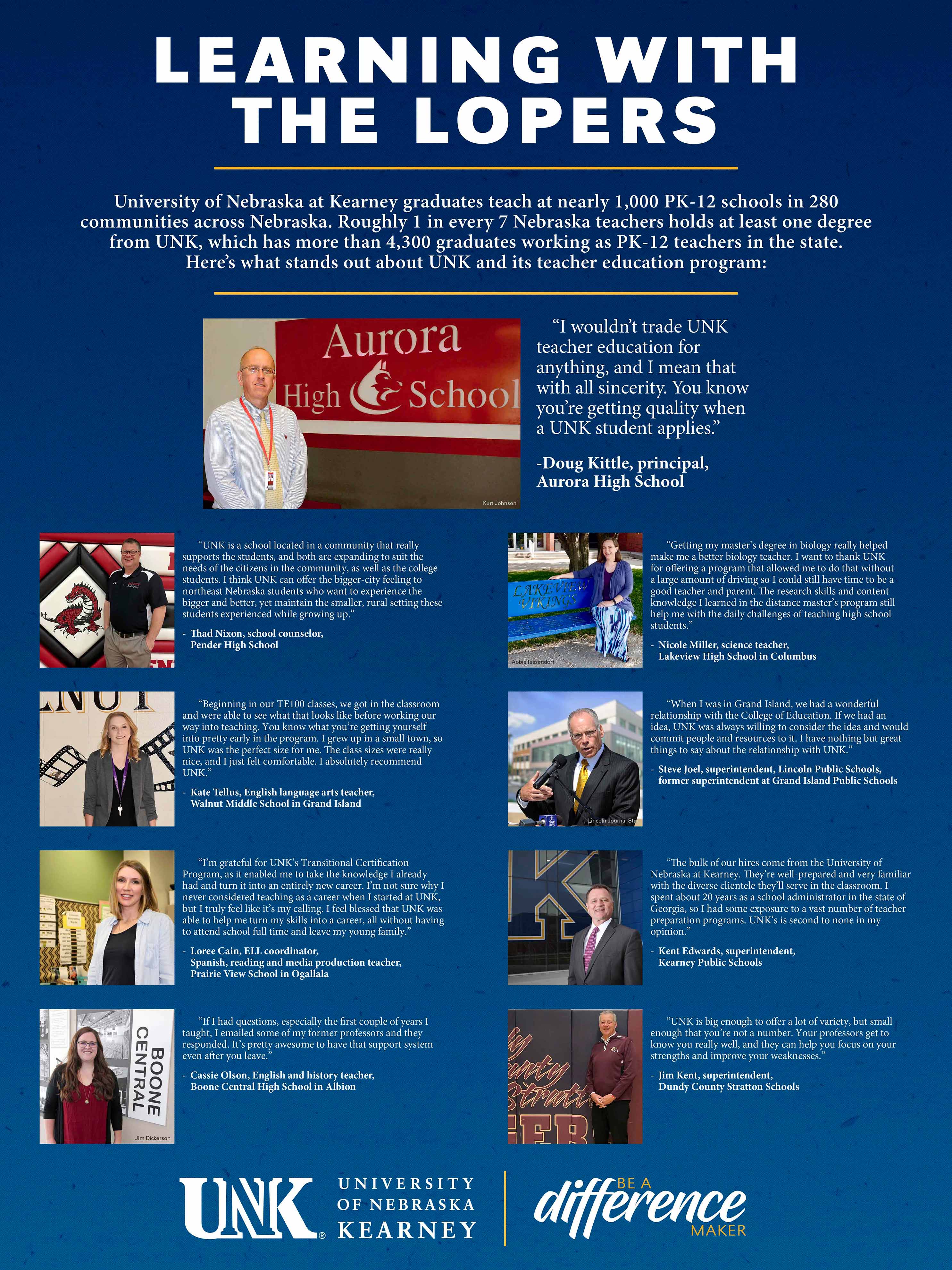 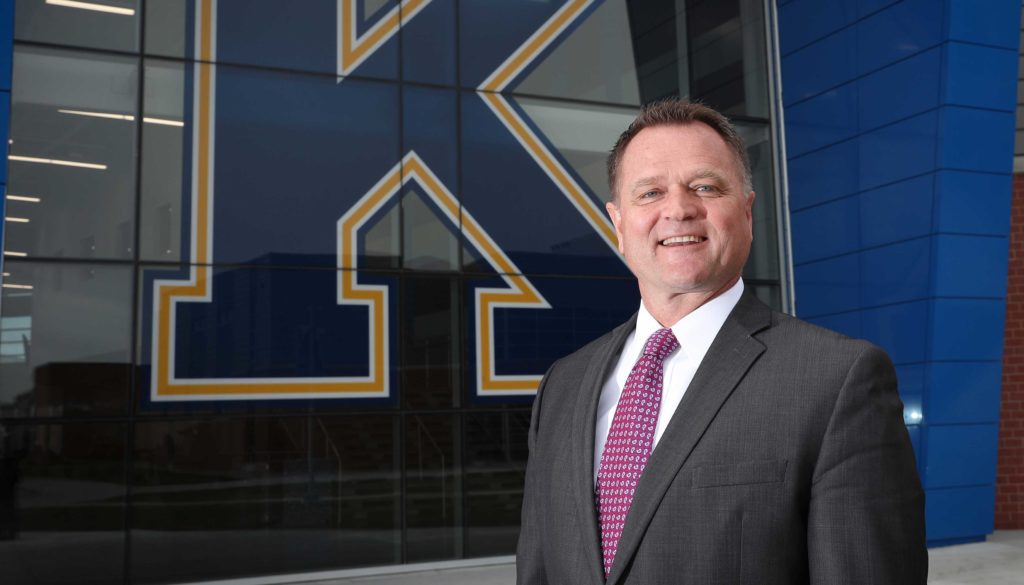