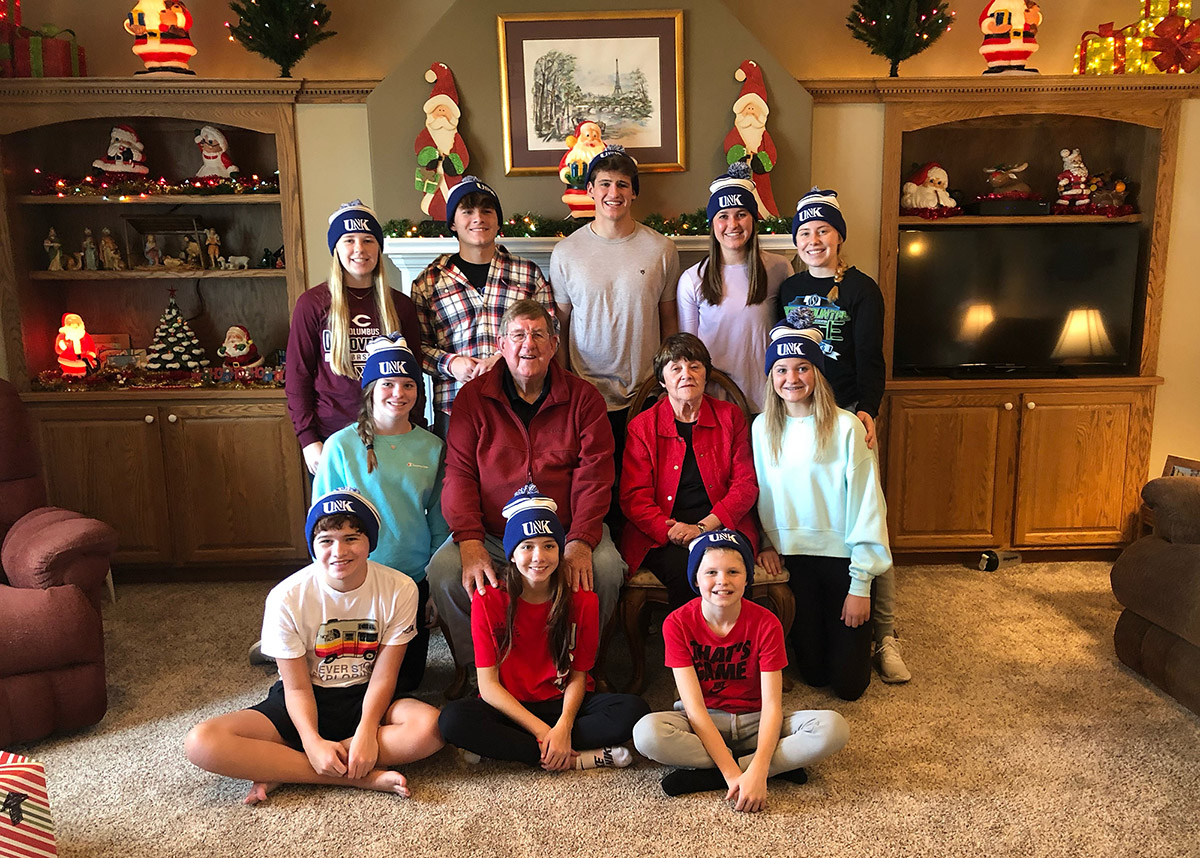 KEARNEY – If a picture is worth a thousand words, this one says a lot about Aspen Luebbe and her family’s connection to the University of Nebraska at Kearney.

The photo, taken last Christmas, shows Dick and Patti Luebbe surrounded by their 10 grandchildren, who are all wearing UNK stocking caps.

Being a Loper is a “big deal” for the Luebbes, according to Aspen, a third-generation UNK student.

Dick played baseball at UNK, known then as Kearney State College, and graduated in 1969 with a degree in secondary math and physical education. He coached wrestling, basketball, track and football at Columbus High School and was inducted into the Discoverer Athletic Hall of Fame earlier this year. Patti also attended Kearney State College, where the couple met, graduating in 1967 with a bachelor’s degree in elementary education and 1971 with a master’s degree.

All three of their children followed suit.

Aspen’s father Jeff was a Chancellor’s Ambassador and president of the Phi Delta Theta fraternity at UNK, where he met his wife Heidi. Jeff earned a degree in biology and works as a veterinarian. Heidi is a social worker at Columbus Public Schools.

“I’ve heard a lot of stories about their time at UNK, so I knew it was a ton of fun,” Aspen said. “They made a lot of connections here and were able to get involved on campus.” 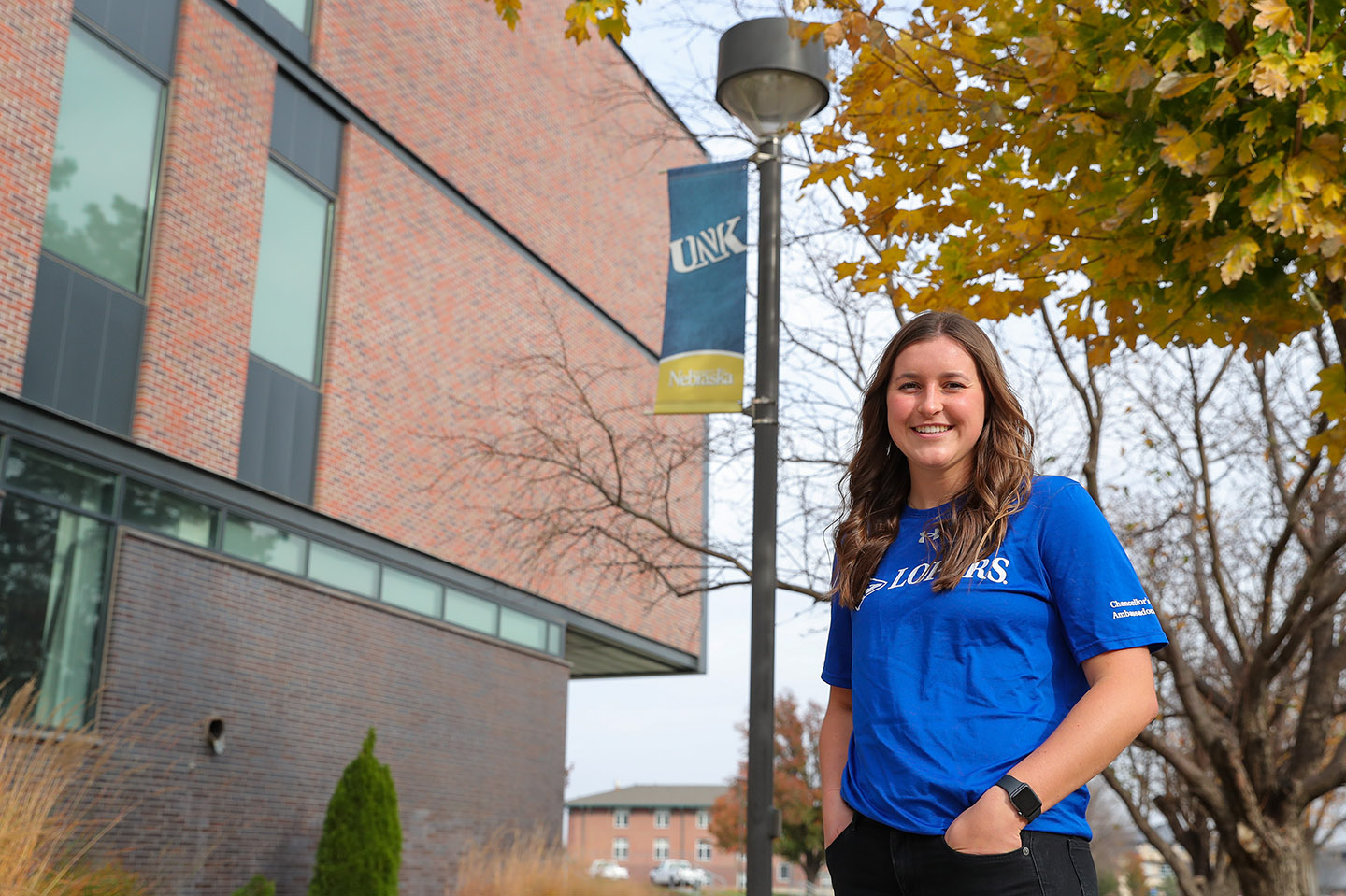 When the time came for her to choose a college, the decision was pretty easy. UNK was close to home, and she had an opportunity to continue golfing competitively.

“Knowing that my family members had a great experience here also played a big part,” she said.

A three-time state medalist in high school, Aspen was part of the Loper women’s golf team for one year. She loved the experience, but decided to end her playing career so she could focus more on academics and other activities.

“It turned out to be one of the best things ever because closing that door opened a lot of other doors for me,” she said. “I don’t think I would be nearly as active on campus or involved on campus as I am now if I was still playing golf.”

The senior exercise science major is definitely making the most of her opportunities.

She’s part of the Alpha Phi sorority, Chancellor’s Ambassadors, Loper Leaders, Circle K and multiple honor societies. These organizations allow her to create connections with people across campus and develop her leadership and interpersonal skills. 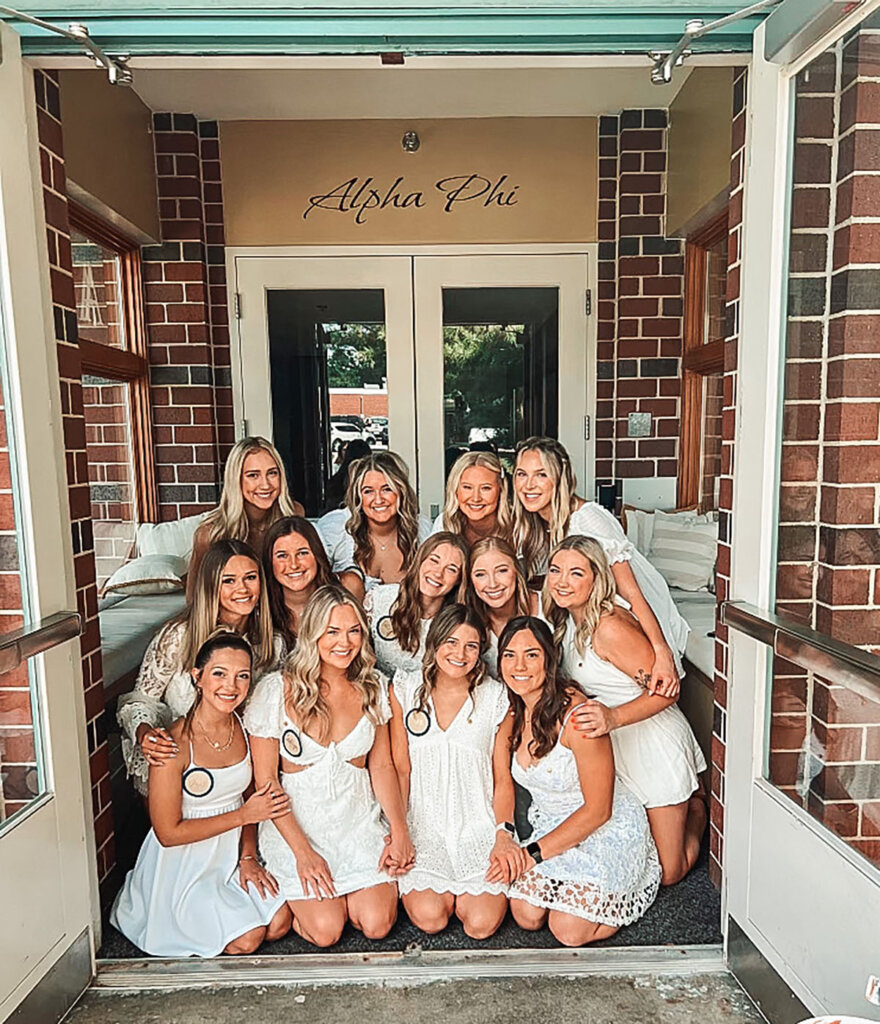 “UNK has helped me grow in so many ways and really shaped who I am,” she said. “Freshman year me is not anywhere close to who I am now. I’ve grown exponentially as a person.”

Although she’s no longer a collegiate athlete, Aspen remains involved in a number of sports. She participates in flag football, pickleball, basketball, broomball, sand volleyball and several other intramural activities, allowing her to maintain that competitive spirit.

“I definitely take it way too serious,” she said with a laugh. “I try to relax, but then the competitiveness just comes out. It’s hard to not want to win.”

In addition to intramurals, Aspen is part of the LoperVision video production team for UNK athletic contests and other campus events, and she’s a certified high school basketball official. She also works as a rehab technician at CHI Health Good Samaritan.

Her impact on the campus and community doesn’t go unnoticed. In October, she was voted homecoming queen by her fellow Lopers.

“I don’t know that I would have ever thought I’d be homecoming queen at UNK, but it’s something I’m super honored by and super proud of,” she said. “I’m very humbled by it, for sure.”

The recognition was even more special since she shared the spotlight with queen candidates and triplets Brooke, Emma and Lauren Benck. They were all on the homecoming court together at Columbus High School, where Aspen was also crowned queen.

She called it a “full-circle moment.”

Aspen will attend physical therapy school after graduating from UNK in May, then it’s up to the other grandchildren to add to the family’s Loper legacy. Her cousin Gracie is a junior at UNK studying English education and her younger brother Ean is a freshman exercise science major.

“We’ll see if the Luebbes keep on coming,” Aspen said with a smile. 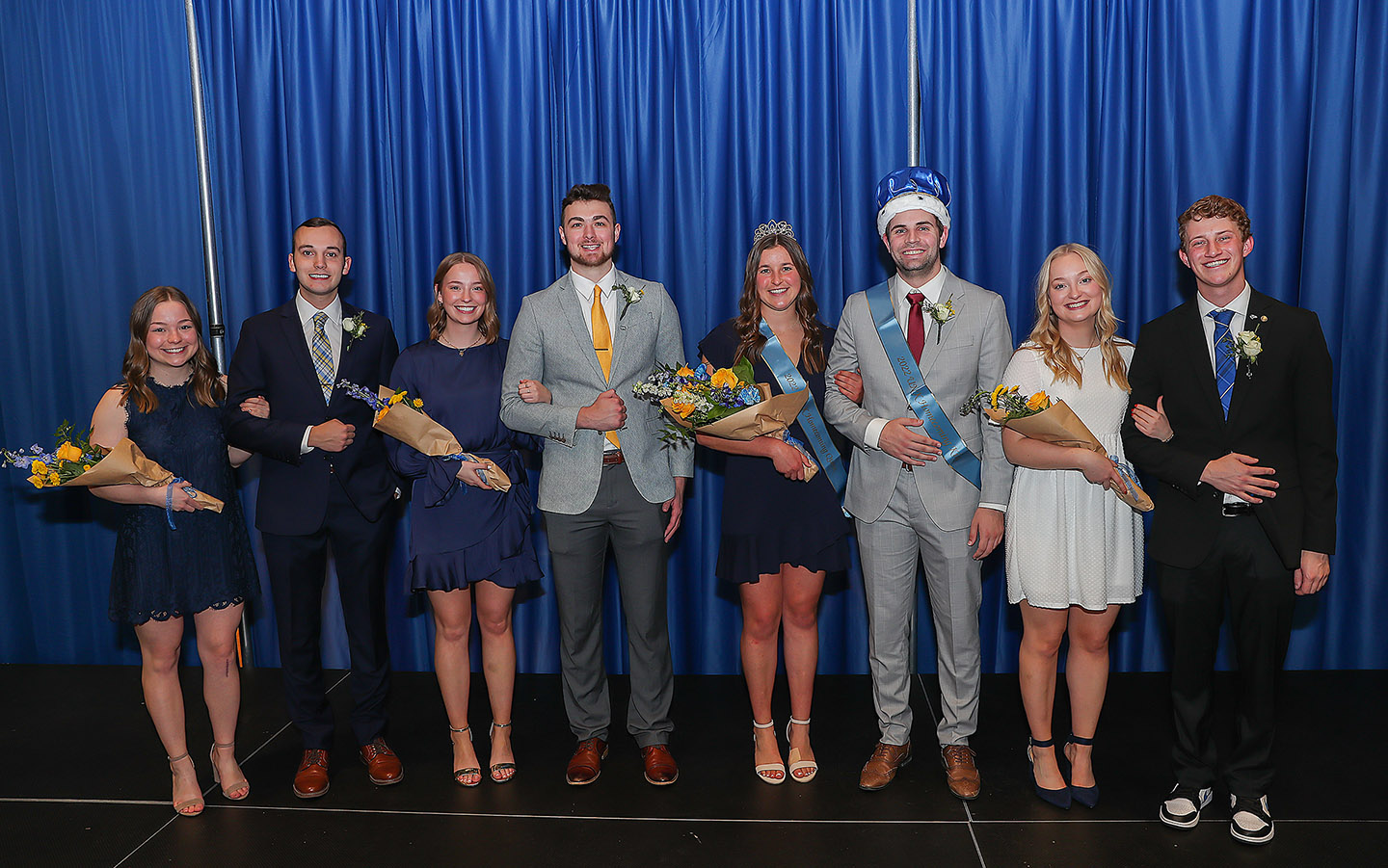 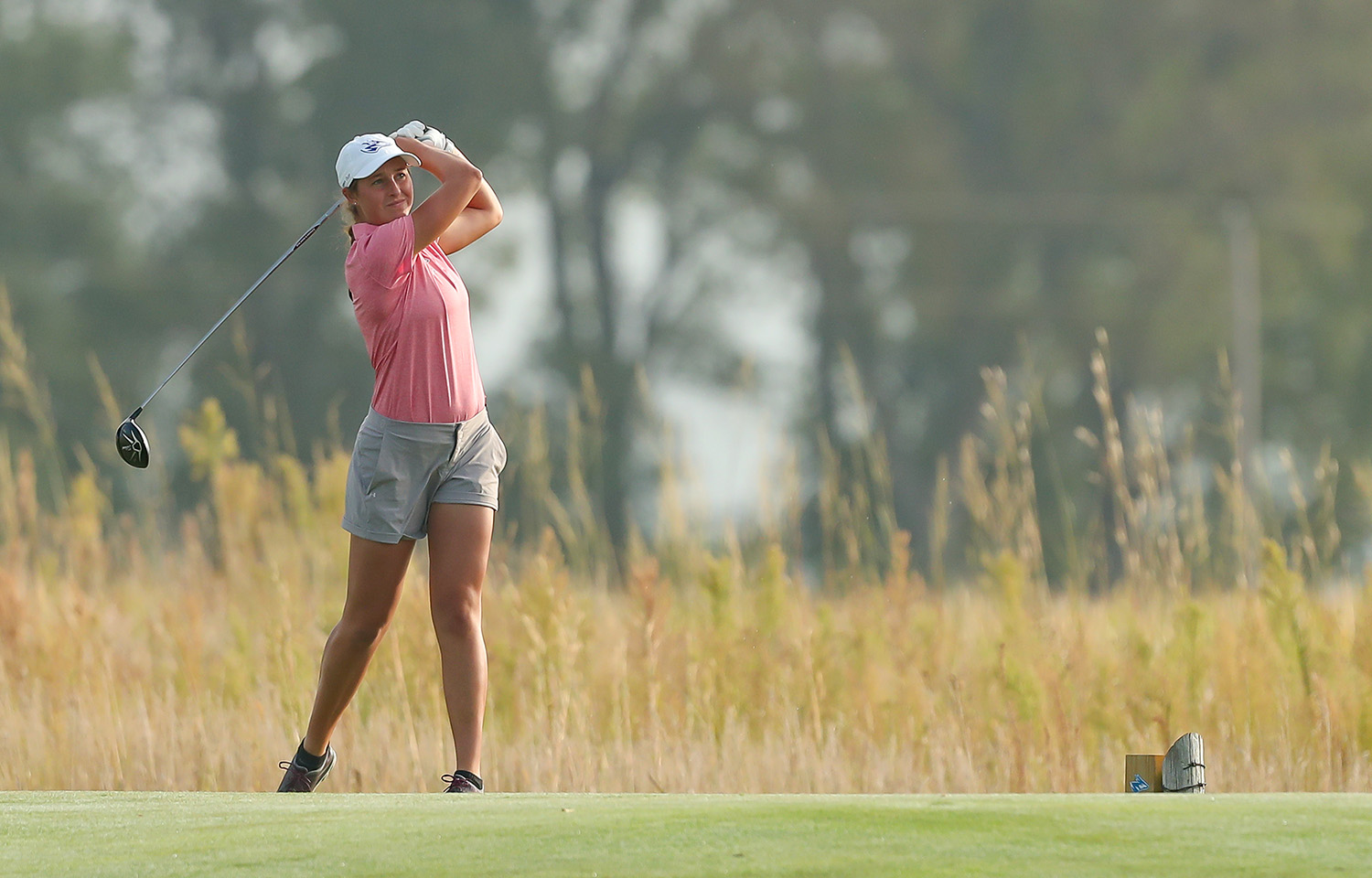 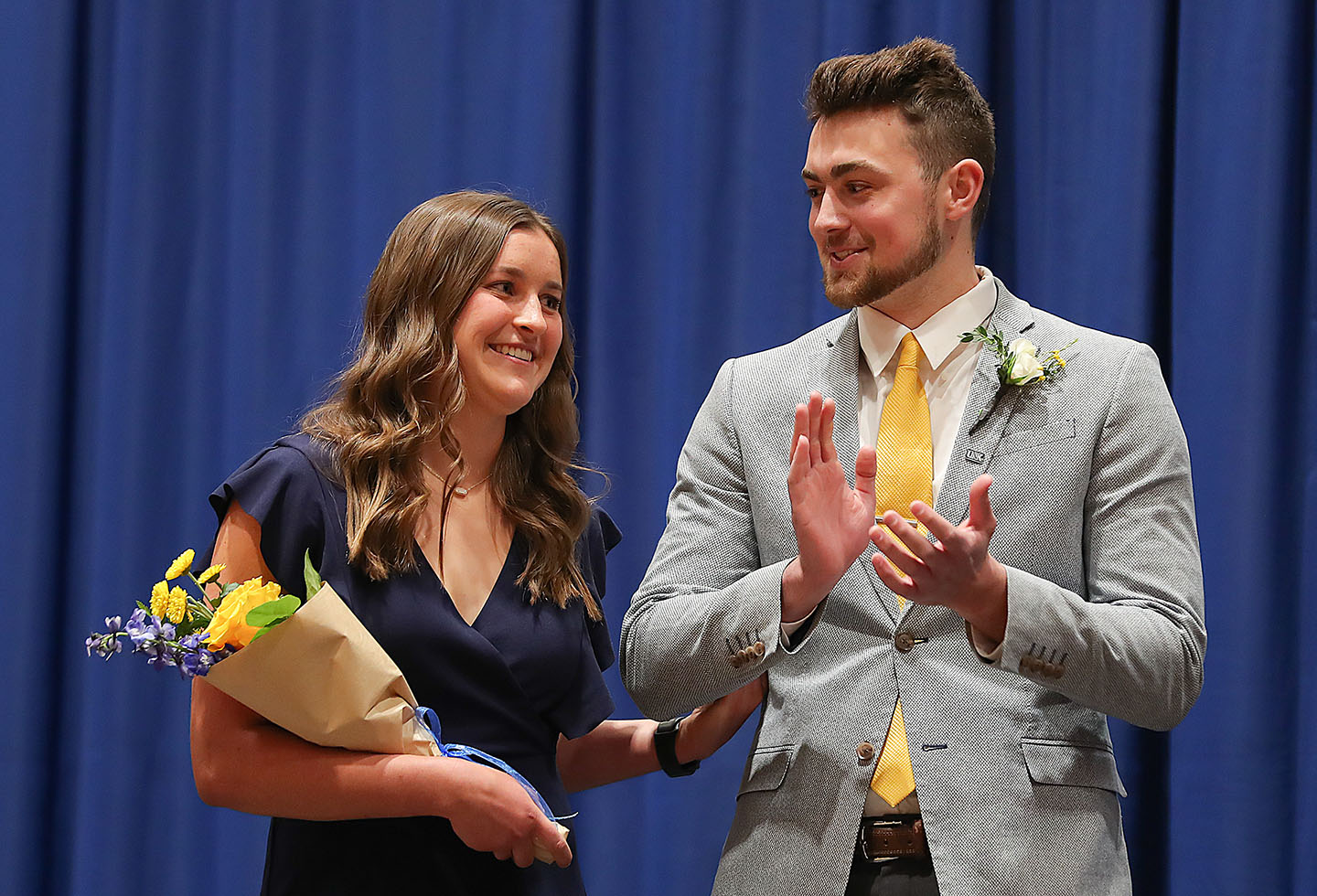