KEARNEY – Earning a degree wasn’t easy, but Giovanni Flores proved it’s something worth fighting for.

The 2014 Lexington High School graduate recently received a Bachelor of Music with an emphasis in music business from the University of Nebraska at Kearney, ending an eight-year journey filled with ups and downs.

Flores struggled to retain information early in his college career. Rather than “waste money on an education that wasn’t going anywhere,” he decided to take a break to figure out how to get better grades while financially supporting his brothers and ailing father in California and mother in Lexington.

He was a part-time student at UNK and Central Community College in Kearney for two years before returning to full-time status at UNK for another two years.

Flores often worked two or three jobs during the day and studied into the morning hours.

All the while, he never gave up on himself or his education.

After finishing the fall 2018 term at UNK, Flores returned to Lexington to work full time in retail and later construction.

While working in retail, he learned what kind of life he didn’t want to lead.

“The longer I kept working there, the worse I felt and the angrier I got. I wasn’t moving up in the world. I just stayed stale,” Flores said.

Then he tried electrical work for a construction company, but realized the outdoor environment wasn’t for him. However, he learned to create electrical cables, which would later prove useful as an audio technician.

Meanwhile, Flores took one college class at a time on the side. One such class, a private trumpet lesson with UNK music professor Tim Farrell, changed his educational trajectory.

Flores unknowingly flipped rhythms when he read music, leading Farrell to ask if he had ever been tested for dyslexia. Flores was surprised by the question, though he knew he struggled with reading and memorized rhythms by ear to compensate.

“That’s how my teacher determined I was dyslexic. So, it’s something I’m always considering when I hear people,” Farrell said. “If you’re reading or writing in a group, it’s sometimes hard for a teacher to distinguish that. But when you’re doing one-on-one in music, sometimes we’re the first ones to figure out those things.”

Flores was diagnosed with dyslexia at a UNK testing site. He then took it upon himself to research the learning disorder and identify ways to improve his reading skills.

He began to read at a “crawling speed” and worked on his concentration. From there, he memorized musical pieces. Flores also used professional audio gear to record himself playing so he could listen for mistakes.

Farrell retaught Flores how to read music on beginning books, and he is now able to play the professor’s doctoral-level pieces.

“It’s not difficult for me anymore,” Flores said.

When Flores returned to study full time at UNK in fall 2020, he received extensions on his assignments through UNK Disability Services for Students. And he jumped back into activities such as Jazz Band, Wind Ensemble, the Sigma Lambda Beta fraternity and Kappa Kappa Psi national band honorary.

However, he lost much of the financial assistance he received earlier in his college career, including a full-tuition scholarship from the Susan Thompson Buffett Foundation. He did get back part of his music scholarships and qualified for federal grants and loans.

To help cover expenses, Flores worked three jobs, including a work-study position in the UNK Department of Music, Theatre and Dance. In October, he accepted a full-time job as the department’s audio and events technician.

His work as a sound technician reconnected him with Jennifer Harvey, director of the Thompson Scholars Learning Community (TSLC) on campus. Harvey, who was surprised to see him working at a TSLC graduation event in spring 2021, inquired about his life.

“He seemed genuinely enthusiastic about his craft,” she said. “I walked away from that conversation feeling like he would be a good example of someone to appeal to get back the scholarship.”

She did just that. Flores then wrote a letter to the Susan Thompson Buffett Foundation explaining his reasons for leaving college, and the foundation granted his appeal this spring.

The additional scholarship money allowed Flores to quit his two part-time jobs and focus on his classes and new role at UNK.

In turn, he earned his best-ever GPA – a 4.0. That raised his cumulative GPA to 3.1, a far cry from the 2.0 mark he had four years prior. It was also a notch above the 3.0 requirement to get into graduate school. Flores hopes to study sound design at the University of Illinois Urbana-Champaign after finishing his contract as an audio and events technician at UNK.

Harvey couldn’t be happier for him.

“I think Gio’s story is inspirational because it showed a longitudinal grit and dedication,” she said. “I’m really proud of him for fighting for his degree.” 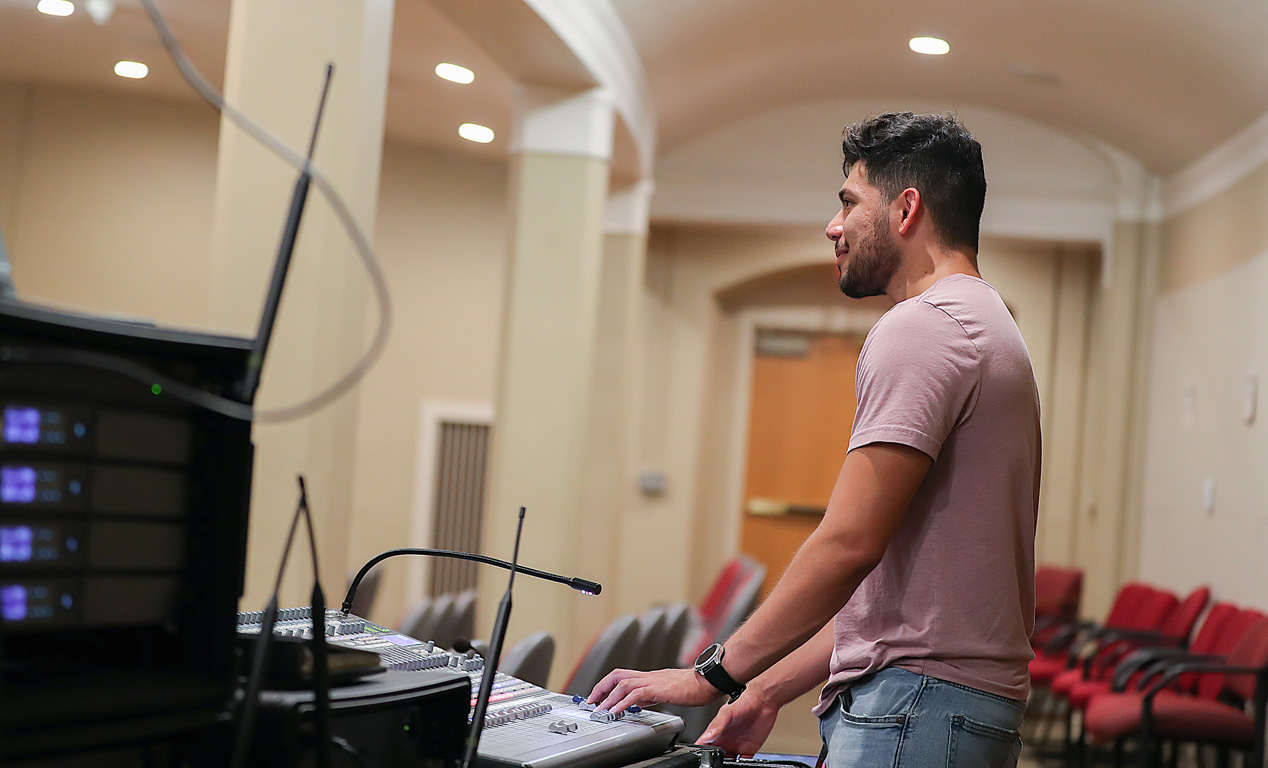