KEARNEY – Like many international student-athletes, Melisa Becerra didn’t visit campus before committing to the University of Nebraska at Kearney women’s tennis team.

She’d never even been to the Midwest.

“Before coming here, I wasn’t familiar at all with Nebraska,” Becerra said.

A nationally ranked junior player in her native Colombia, Becerra wanted to attend college in the United States to get out of her comfort zone and expand her worldview. She researched UNK and the Kearney community on the internet and chatted with head coach Scott Shafer over the phone, but still didn’t know exactly what to expect when she arrived in January 2021.

“I’m not going to lie, it was hard to adapt to something completely different than I was used to,” Becerra said.

She’s never regretted the decision, though.

“I have grown so much as a person, as a leader and as a human being overall,” she said. “It feels like I’ve found a sense of calm, even though I’m many miles away from home.” 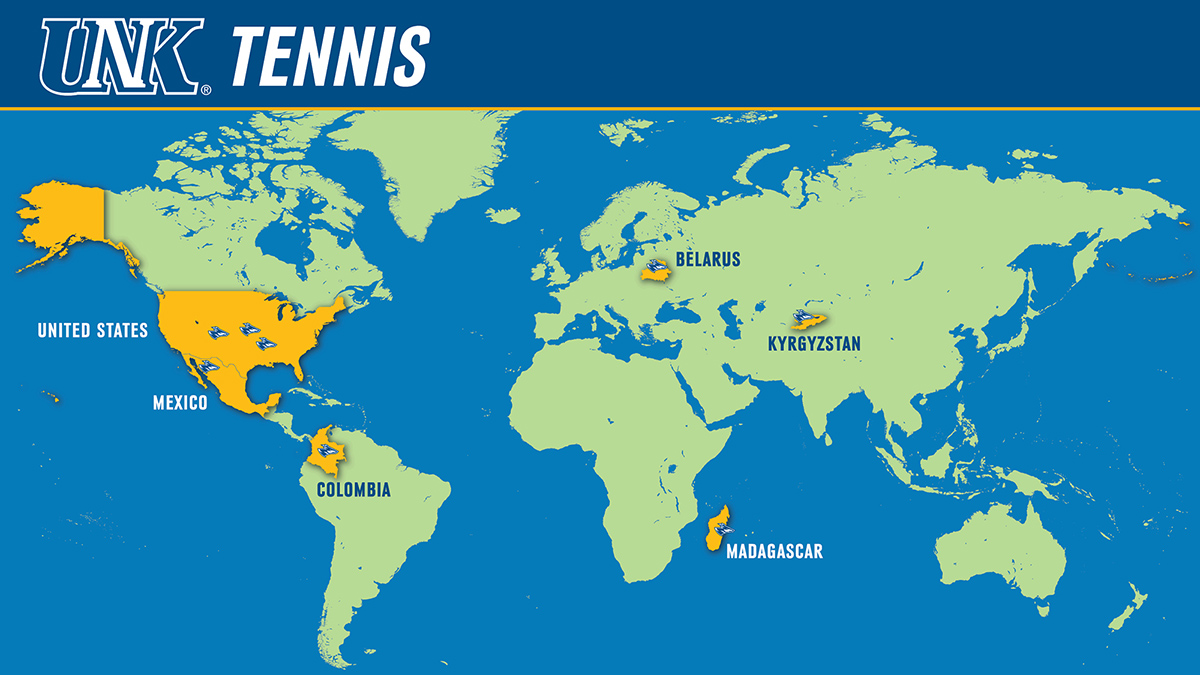 At UNK, Becerra is part of a tight-knit tennis team with members from across the globe. Among the 10 current players, only three grew up in Nebraska and five came here from different countries – Belarus, Colombia, Kyrgyzstan, Madagascar and Mexico.

Although their backgrounds vary, these Lopers share the same passion.

“We all have something in common, which is tennis. We like playing tennis,” said Jazmin Zamorano, a sophomore from Sonora, Mexico.

Tennis is what brought them together, but the bond is actually much deeper.

“We’re like a family,” said Alexis Bernthal, a freshman from Boulder, Colorado. “We all get along so well.”

That chemistry is apparent on the court, where the Lopers are 11-8 this season and ranked No. 7 in the Central Region. They’re currently No. 43 nationally, after reaching a program-best ranking of No. 12 in March.

“I feel like we’re very encouraging and we really fight for each other,” Zamorano said. “When we have close matches, you really feel it.”

Of course, they’re all quite competitive, too. When one teammate wins a match, the others are determined to follow suit. Nine of their 11 victories this season were 7-0 sweeps and the other two were 6-1 wins.

“There’s just this desire to prove themselves, which isn’t something I’ve seen a lot,” Shafer said. “You’ll have individuals like that, but collectively they have this shared mentality – we’re good and we’re going to show it.”

Like Becerra, Zamorano was a nationally ranked player in her home country. As a doubles team, they’re currently ranked No. 48 in NCAA Division II. Bernthal was a three-time Class 5A state qualifier at Fairview High School, winning the singles title in 2019 and taking second in 2018.

“Before college, tennis was more of an individual sport, and now it’s a team sport,” Bernthal said. “It’s a lot more fun as a team sport. You want to keep getting better and you want to see your teammates get better.”

That camaraderie is especially meaningful for Becerra, Zamorano and the other players who are hundreds or thousands of miles away from their families.

“It’s not like any other bond,” Becerra said. “The bond you’re able to build with your teammates is really beautiful.”

Off the court, the Loper tennis players eat meals together, celebrate birthdays and attend the same campus events. It’s a mutually beneficial relationship that allows the international student-athletes to learn more about American culture and introduces the domestic players to other parts of the world.

“I think the international girls are really impressive because they’re not only good at tennis, but they’re also communicating in their second or third language and they’re getting A’s in classes. College is hard enough in your first language,” Bernthal said. “That’s really cool and it makes me want to go to other countries and experience a bit of what they’re experiencing.”

The Lopers will play their final home match of the season 11 a.m. Sunday when they host Missouri Western State University at Harmon Park. The MIAA tournament is scheduled for April 29 to May 1 in Edmond, Oklahoma, and UNK remains in contention for a spot in the NCAA Division II Championships.

With just one senior on the roster, Pranathi Gannavaram of Lee’s Summit, Missouri, expectations will be even higher in 2022-23, but that certainly won’t impact Shafer’s recruiting strategy.

“It’d be really great if I got a student-athlete from Australia next year so we have all six (inhabited) continents represented,” he said with a smile. 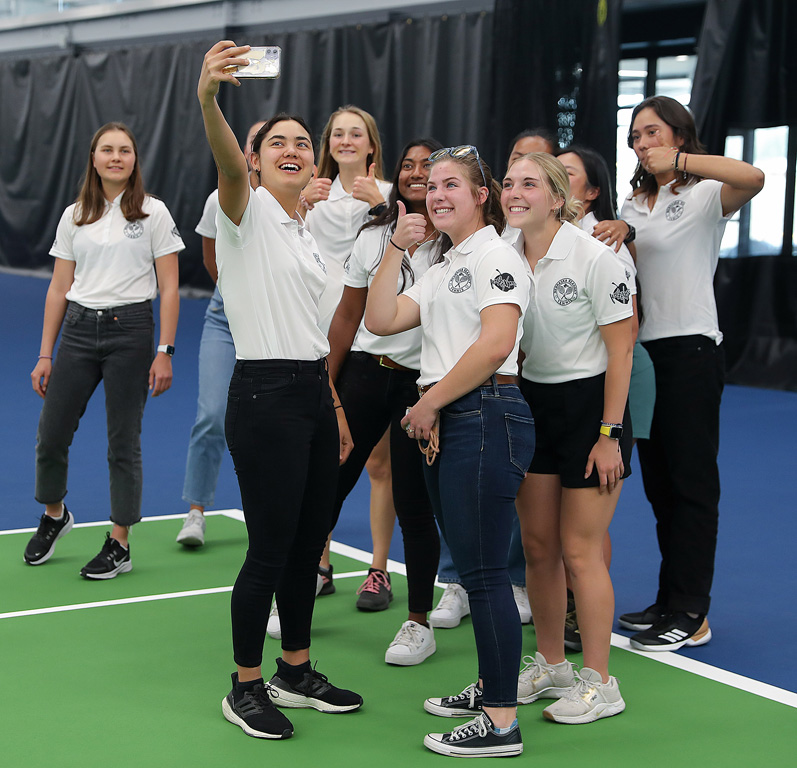 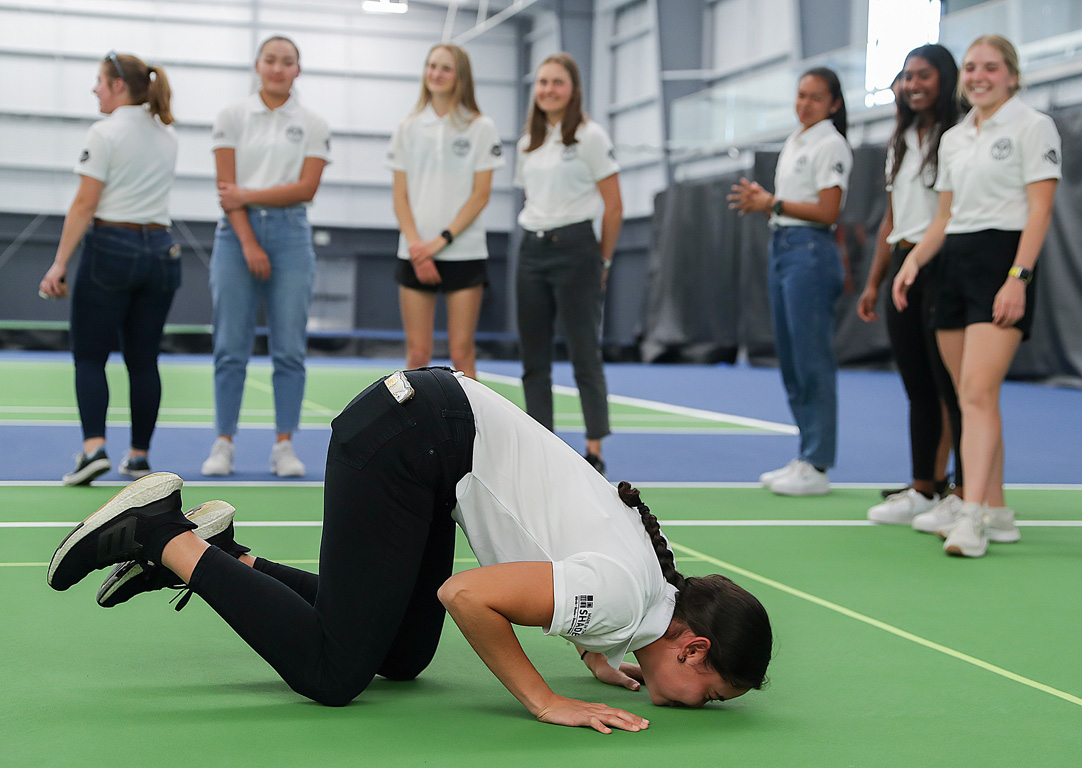