KEARNEY – The University of Nebraska at Kearney’s offensive philosophy can be summarized in just three words.

It’s not overly complicated, but it sure is effective.

The Lopers have rushed for 1,089 yards and 11 touchdowns during their perfect 4-0 start to the 2021 football season. Only two teams in Division II – Harding and Grand Valley State – gain more yards per game on the ground.

Quarterback TJ Davis does most of the damage for the Lopers, who are ranked No. 12 in the AFCA Coaches Poll. His 545 rushing yards are fourth best in the country – no other QB cracks the top 40 – and he’s third nationally with nine rushing TDs.

The redshirt junior from Colorado Springs also ranks 11th in total offense per game (324 yards) and 14th in passing efficiency with a 167.45 rating.

Unsurprisingly, these numbers have garnered a lot of attention for Davis, who’s been named MIAA Offensive Athlete of the Week two times through four games.

Although he definitely deserves the accolades, Davis knows there’s another group of guys who make his job much easier. And they’re rarely in the headlines.

“Without them, I wouldn’t be able to do what I’m doing,” Davis said of his offensive line. “It starts with those guys up front. They do a lot of things for us.”

“It’s not in the newspaper – he got a pancake block – but I definitely see it and I definitely appreciate that,” Davis added. “And I make sure they know that.” 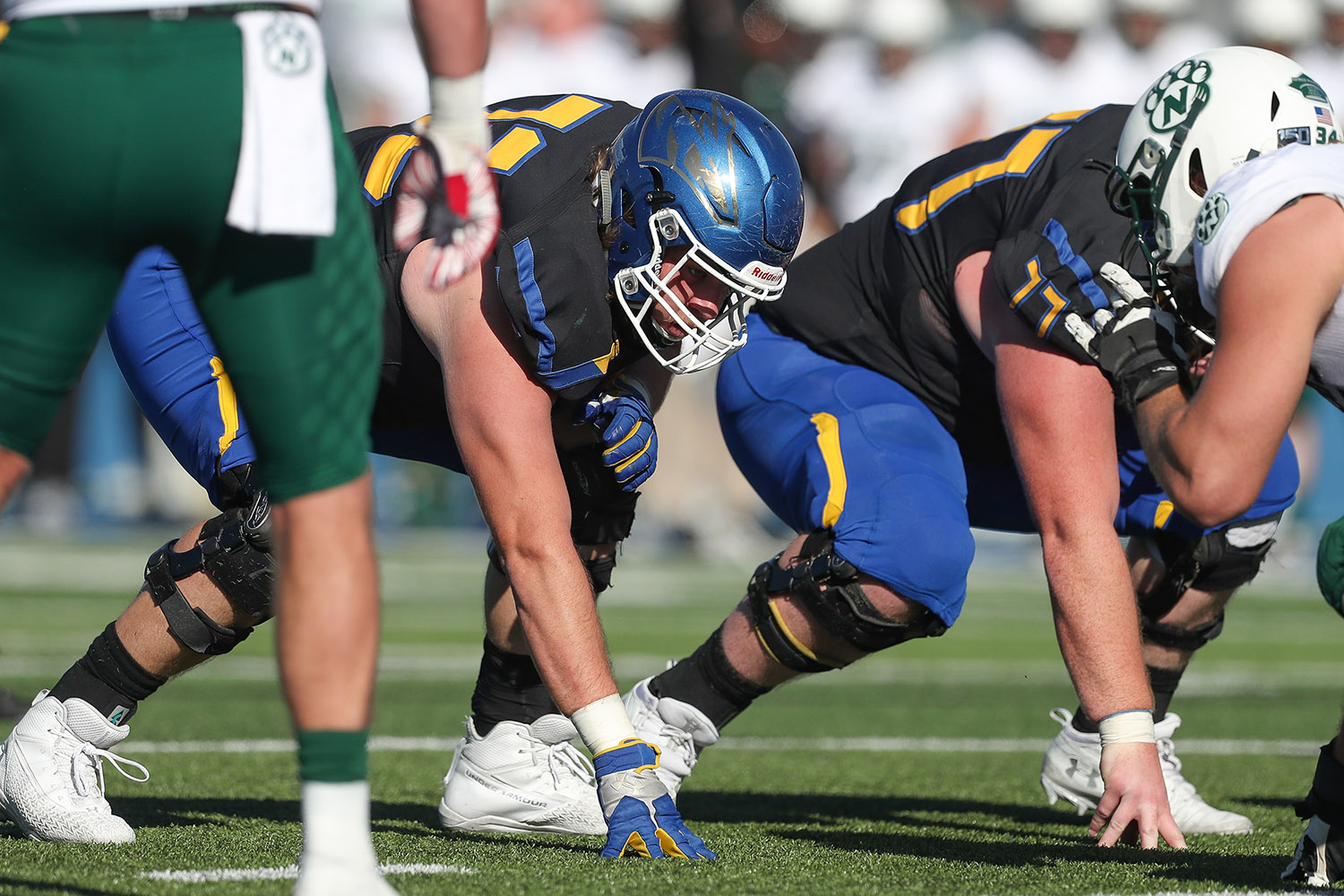 The offensive linemen are the unsung heroes for a UNK team averaging 473 yards and 31 points per game.

“Being an offensive lineman is the weirdest position in football, because you’re never going to get love. The only time you’re going to get noticed is probably when you mess up,” said Corey Hoelck, the starting right tackle since 2017.

Frankly, the five men blocking for Davis and the other Loper ballcarriers aren’t looking for fame. They put in the effort because “that’s what we love to do.”

“They all work extremely hard, and they come to work every day,” said UNK head coach Josh Lynn, who also coaches the offensive line. “It’s really fun for a coach to have a group like that because you don’t have to coach effort. You can just go out there and focus on scheme and technique.”

Hoelck describes the unit as “brothers for life.” They might get after each other during practice or games, but they’re best friends once the pads come off.

“We’re probably the tightest group on this team,” said starting left tackle Kooper Reece, a redshirt junior from Valentine. “Top to bottom, seniors to freshmen, we’re going out to eat together. We’re watching film together. It’s a brotherhood for sure.”

That’s right, every Thursday night the entire position group – starters and reserves – eats a meal together at a local restaurant. The hardest part is getting a reservation for a couple dozen guys who all weigh in the neighborhood of 300 pounds.

“We pile 20 massive individuals into a restaurant,” Hoelck said with a laugh. “They love it though.”

That camaraderie, coupled with the group’s extensive experience playing together, is a major advantage on game day.

“As an offensive line, it’s five guys – five different positions – working together to execute a play,” Lynn said. “The great offensive lines have great chemistry. A group that really likes each other and really cares about each other, that carries onto the field because their communication is a lot better.”

Reece likes to use the phrase “operating five as one.”

“That’s probably the most important thing in terms of an offensive line, because if you can’t trust the guy next to you, you’re not going to play hard for them. And this isn’t really a position where you can play soft. It’s full go all the time,” he said.

A team co-captain and leader on the offensive line, Hoelck is the player who brings energy to every workout and practice.

He calls himself “the juice guy.”

“I’m just a loud dude,” Hoelck said. “I’ve got to be loud at practice. I have to be vocal to make sure the team is locked in during the week.”

Sure, Hoelck can be “goofy and weird,” but that’s part of the plan. He wants his teammates to work hard while also having fun.

“If there’s one thing I can say about Corey, he always puts a smile on my face,” Lynn said. “He’s one of those kids who can push through the difficult stuff and still have a great attitude and encourage others. It’s a breath of fresh air.”

“He’s definitely the jokester of the group,” Reece said. “But when it gets down to game time, you don’t want to mess with him. He’s dialed in and ready to go.”

Antics aside, Reece considers his teammate to be “one heck of a mentor.”

“When I came in as a true freshman, he instantly took me under his wing, got me in the playbook and started holding me accountable on a different level than what I’ve ever been held before,” he said. “And he does that with all the freshmen.”

Good Morning!! @CoreyHoelck @jacobbrowne74 was killing it this morning out at Buffalo Hills Elementary with Morning announcements. If this doesn’t get you going, I don’t know what will!! pic.twitter.com/wcfci7rNa2

THE ONLY WAY IS UP

A three-time Class D-2 all-state selection at Giltner, Hoelck had an opportunity to walk on at several Division I schools.

Instead, he chose to play football at UNK, which hadn’t won more than three games in a season since joining the Mid-America Intercollegiate Athletics Association (MIAA) in 2012. The Lopers went 0-11 when they were recruiting him in 2015.

“There wasn’t a whole lot to sell at that time,” Hoelck said.

Yet, he was undeterred. UNK was close to home, his academic and athletic scholarships covered tuition and he believed the program could return to its former glory. 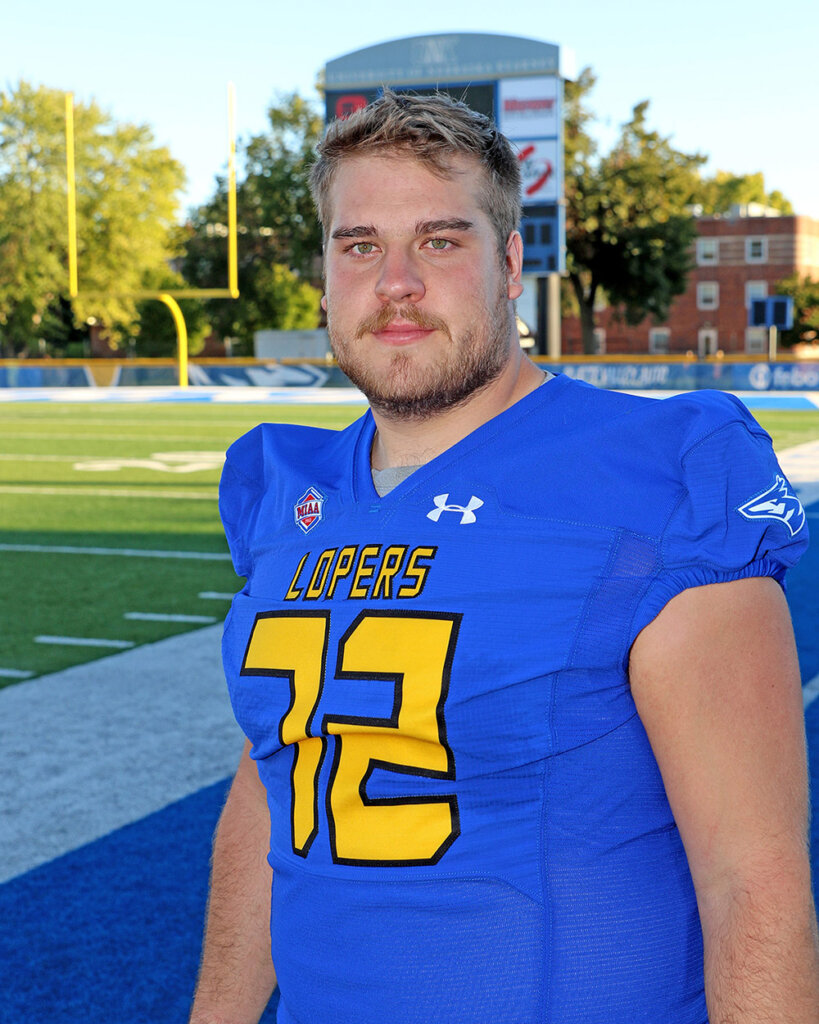 “There’s only one way to go, and that’s up,” he said. “I think that was big for me. You want to turn it around and you want to win in this conference.”

UNK finished his freshman season – a redshirt year for Hoelck – with a 1-10 record. A lot has changed since then.

Improvements to the weight room and additions to the strength and conditioning staff paid immediate dividends. Once a “super undersized” lineman at 6-foot-4, 250 pounds, Hoelck now weighs 305.

“He’s such a players’ coach,” Hoelck said of Lynn. “He believes in us and we believe in him. All of our coaches are that way. We trust what they put in front of us and they trust us to go out there and execute for them. We’re going to work our butts off during the week and it’s all going to pay off on Saturday. I think that’s one of the biggest changes you can see on this team.”

Hoelck’s decision to attend UNK is paying off, too.

The Lopers posted a 7-5 record in 2019 – their first winning season since leaving the Rocky Mountain Athletic Conference – and beat Winona State in the Mineral Water Bowl. Hoelck was a second-team All-MIAA selection.

UNK followed that success with a 2-0 record during last year’s unofficial season, and Hoelck graduated in December with a bachelor’s degree in health and physical education. The 24-year-old got engaged last summer, and he’s currently pursuing a master’s degree in sports administration.

Eventually, he wants to coach college football – a career choice inspired by his time as a Loper.

“The reason I love UNK is because of how close-knit this athletic program is and how tight-knit this community is,” he said. “It’s not really about the wins and losses at this point. It’s about the relationships I’ve gained from just being here. That’s what I appreciate the most.”