The award honors UNK seniors for their excellence in scholarship and leadership, as well as their involvement and dedication to UNK and the Kearney community. Recipients were selected by a panel of UNK alumni. 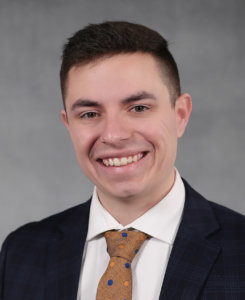 Austin Jacobsen of Sidney will receive a degree in sports communication and exercise science in May. He has accepted a position with KRVN Radio in Lexington as a news reporter and sports broadcaster.

He was also active in his fraternity, Sigma Phi Epsilon, and served as president of the Interfraternity Council. 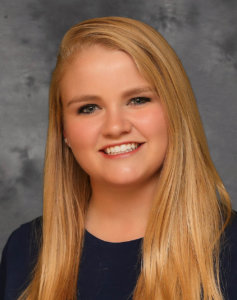 Kristensen has served as coordinator of the Chancellor’s Ambassadors organization and as a campus visit assistant at UNK. She’s a member of the UNK Honors Program and Mortar Board, Beta Gamma Sigma and Phi Kappa Phi honor societies, and she studied abroad at Palacky University in the Czech Republic. Kristensen is also active in her sorority, Alpha Phi, serving as an executive board member and Panhellenic Council executive board member.

She completed internships with the Nebraska Golf Association and the Kansas City Sports Commission and Foundation and WIN for KC. 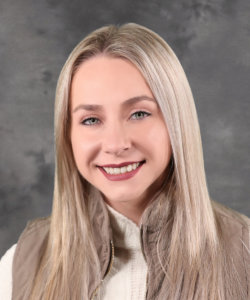 Grace Magill of Arnold graduates in May with a degree in business administration with a marketing emphasis and a minor in visual communication and design. She plans to pursue a Master of Business Administration at UNK.

Magill served as president of the Brewed Awakening campus coffee shop and vice president of the Enactus business and entrepreneurship organization. She was a Cope Scholar and resident assistant, and was active in her sorority, Gamma Phi Beta, serving as chapter president, public relations vice president and administrative vice president. She also helped host community service events for the Kearney S.A.F.E. Center, Girls on the Run and McKenna’s Rae of Hope Foundation.

Magill works in the UNK Office of Financial Aid. 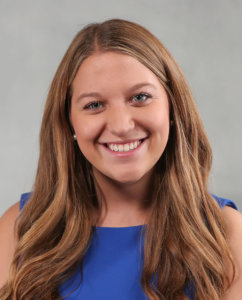 At UNK, Parshall was vice president of the Order of Omega Greek honor society and a member of the Mortar Board, Phi Alpha and Phi Eta Sigma honor societies. She served on the UNK Student Senate and was active in her sorority, Alpha Phi, holding the positions of vice president of risk management and director of parent relations.

Parshall completed internships with CHI Health Good Samaritan and the University of Nebraska Foundation, volunteered for AseraCare Hospice and worked at Boys Town as a summer youth supervisor. 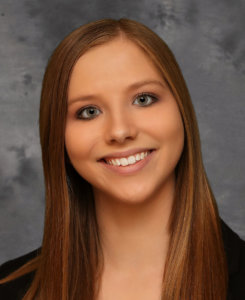 Haley Pierce of West Point graduates in May with a degree in journalism and minors in political science, women’s and gender studies and media production. She will pursue a master’s degree in political communication at Indiana University.

A member of the UNK Honors Program, Pierce served as president of FIRST Leaders; president, vice president and homecoming chair for the Loper Programming and Activities Council; president of the Lambda Pi Eta honor society; treasurer for Students in Mass Media; and managing editor, news editor and sports editor of The Antelope student newspaper. She also participated in undergraduate research, including presentations in Omaha, St. Louis, San Diego and Tokyo, Japan.

Pierce was a mentor in the Friends Program and served as Blue Gold Welcome coordinator for the UNK First Year Program.