KEARNEY – Like many University of Nebraska at Kearney student-athletes, Mikara Feit views her teammates as a second family.

And she’s definitely the big sister of the group. 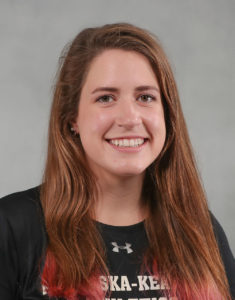 “Sometimes we fight, but in the end you’re always there to pick each other up,” the 21-year-old said. “We’re a small team, so we have no other option than to be a close, tight-knit family.”

Feit is the lone senior on UNK’s swimming and diving team, putting her in a leadership position she’s fully embraced during her final season as a Loper.

Sure, that role comes with a little more pressure, but the Lincoln Northeast graduate has the perfect personality to handle it. She has no problem keeping her teammates excited and engaged.

“I’m kind of loud and I’m very outgoing,” Feit said. “I think that helps a lot.”

Her work ethic is also second to none.

“She’s a very dedicated, passionate swimmer, and that shows every day in practice and during meets,” said UNK swimming coach Becky O’Connell, who described Feit as a “get-to-work gal.”

Feit’s focus and competitive spirit not only set an example for her teammates, they give the Lopers their best opportunity to win.

She’s competed in 15 different individual events this season, ranging from 50 yards to 1 mile, and been part of five different relays. Feit swims the butterfly, backstroke, freestyle and medley – whatever she can do to help the team.

“She’s been a real leader for us that way,” O’Connell said. “That’s really spread throughout our team, and it’s pretty cool to see the swimmers wanting to try new things.”

For Feit, primarily a distance freestyler during high school, becoming a more well-rounded swimmer was both a challenge and an opportunity.

“I like being able to push myself and figure out what I’m good at it,” she said. “It can be hard trying to figure out which events to focus on, but it’s also fun to mix things up sometimes. It keeps things interesting and kind of keeps you on your toes.”

Feit’s ability in the pool is reflected in UNK’s record books. She ranks in the top 10 all-time in seven different events, including second in the 100-yard backstroke (1 minute, 1.75 seconds) and third in the 100 individual medley (1:06.06).

Those records mean a lot, Feit said, but they’re not the highlight of her UNK career.

“Swimming fast times is cool and all, but seeing your teammates break records is so much better,” Feit said. “It’s fun to watch the younger girls grow and figure out where they belong.”

That’s what makes her such a good “big sister.”

With her collegiate career likely coming to a close at this week’s Rocky Mountain Athletic Conference Championships in Grand Junction, Colorado, Feit knows she has one more chance to compete with her teammates and make one final memory.

“I really enjoyed the time I’ve gotten to spend traveling with the team and getting to know them,” she said. “It’s been such an amazing experience. I have friends who have gone on and graduated, and I have friends who are freshmen and I’ll be able to watch them continue to swim.

“It’s just been so cool. It’s exceeded every expectation I could have ever had.”

A member of UNK’s Student-Athlete Advisory Committee and Secondary Educators Club, Feit maintains a 3.9 GPA while studying 7-12 special education with an English as a second language endorsement. She plans to graduate in December, then pursue a career as a high school special education teacher and swimming coach.

“She’ll be so good,” O’Connell said. “She’s just so enthusiastic and so much fun.”