“He loves watching movies and talking about movies,” Gallas said. “It’s humorous to be around him because he’s always cracking jokes.”

Famous McKinnon, one of Ingraham’s closest friends, calls him a “high-energy guy” who can motivate others with his infectious personality.

“Jordan is a real funny person. He’s always telling jokes and trying to make people laugh,” said McKinnon, who played cornerback for the Lopers from 2014-18. “When there’s a down time in the game and things aren’t going as well, he’s always trying to lift people up and make sure everybody stays positive.”

Ingraham’s constant smile and happy-go-lucky attitude stand out on campus, making him one of the faces of the UNK football program.

But just like a good box office drama, there’s another side to big No. 93. Once the whistle blows, his alter ego comes out.

“He’s got the ability to be aggressive at any moment,” Gallas said. “Some guys talk about being able to turn it on and off, and he actually has the ability to do that.”

Gallas called Ingraham a “remarkable” athlete, a nose guard with the size to shut down an opponent’s interior running game and the quickness to beat an offensive lineman and run down a quarterback. He’s also “very, very smart,” Gallas said.

For Ingraham, who has played in all 37 games over the past four seasons, starting 26 of them, this focus and attention to detail comes naturally.

Football is a way of life for him.

“I live, breathe and eat football,” he said. “This is my heart’s desire to play football. It just means the world to me and I see it as a blessing.”

The UNK senior grew up in Miami, a hotbed for high school football talent, at a time when Florida products such as Warren Sapp and Deion Sanders were dominating the NFL.

Yet, his favorite player was Jerome Bettis, a Detroit native who attended Notre Dame.

“That was my guy,” Ingraham said. “I loved Jerome Bettis.”

Bettis, nicknamed “The Bus” for his bruising running style, rushed for 13,663 yards and 91 touchdowns in 13 seasons with the Los Angeles/St. Louis Rams and Pittsburgh Steelers and was elected to the Pro Football Hall of Fame in 2015.

“I liked to carry the ball and just run people over when I was little,” he said. “It would just give you a rush.”

But his Bettis-like size proved to be a problem. Ingraham was too big to play organized tackle football as a youth, so he had to sign up for flag football leagues.

He didn’t put on a helmet and pads until his freshman year at Booker T. Washington Senior High School, when Ingraham was 5-foot-9 and weighed 245 pounds.

“My first workout at Booker T., I remember it to this day,” he said. “I really had to push myself. I had never been pushed that hard. That’s something Booker T. prides itself on, strength, conditioning and running.”

“Traz Powell Stadium, that’s where you want to be on Friday nights,” Ingraham said of the 10,000-seat venue where Booker T. Washington plays its home games. “Everybody from different neighborhoods comes out just to watch a football game.”

Ingraham started for three seasons at Booker T. Washington – one on the defensive line and two on the offensive line – and the Tornadoes lost just three games during that span. They won back-to-back state titles and were named the national champion by USA Today and several other prep football polls following a perfect 14-0 season in 2013.

A first-team all-state selection and second-team All-American as a senior, Ingraham committed to Division I Florida International University in Miami, but never suited up for the Panthers.

He was attending Miami Dade College, which doesn’t have a football program, when a friend reached out.

McKinnon and Ingraham first met through youth football, and they were teammates for two seasons after McKinnon transferred to Booker T. Washington from Miami Senior High.

“He’s like my big brother in a sense,” Ingraham said. “I look up to him for a lot of things.”

McKinnon, who graduated from UNK in May, was still playing for the Lopers when he picked up the phone to call his pal.

“I knew what kind of player he was, and I knew we needed somebody like him,” he said of Ingraham. “I just felt like he was the person we needed out here.”

“He basically recruited me to come out here,” said Ingraham, who enrolled at UNK for the spring semester in 2016 and arrived on campus without ever visiting Kearney.

Ingraham recorded 31 tackles, third-best among UNK defensive linemen, as a freshman, but the Lopers finished the season with a 1-10 record. In 2017, the first season under current head coach Josh Lynn, the Lopers improved to 3-8 and Ingraham tallied 24 tackles and 4.5 sacks, ranking second on the team.

He knew he had made the right decision.

“I felt like with coach Lynn coming in that we could build something new,” Ingraham said. “He had a game plan and he still has the same game plan to make this team great, and I believe it. I believe it in my heart that we can do something special.”

The Lopers are 2-2 heading into Saturday’s homecoming game against Northeastern State University, set for 2 p.m. at Cope Stadium, and Ingraham expects his teammates to give their season a Hollywood ending.

“I feel like every team we play against, they got something coming to them,” said Ingraham, an alternate team captain and a member of the football team’s Unity Council leadership group. “This isn’t the Lopers of the past, this is the Lopers of right now. We all have a chip on our shoulder and we play our hearts out.”

For the 24-year-old business administration major, who plans to graduate in summer 2020, the next two months could be his final chances to play the sport he loves.

“There’s no next year for me. This is my last go-around,” Ingraham said. “I’ve got to take advantage of the right now because I might not get another opportunity.” 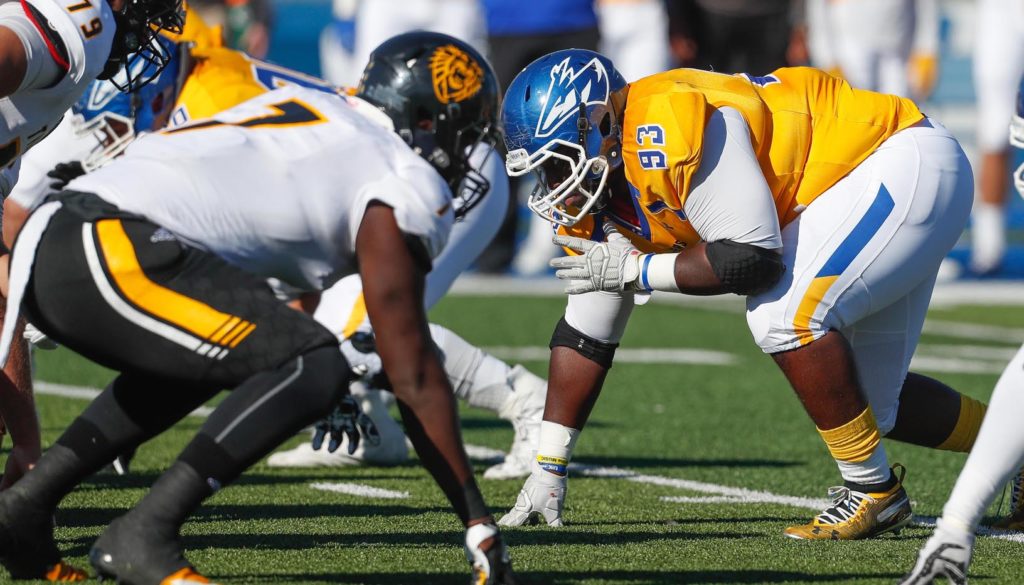 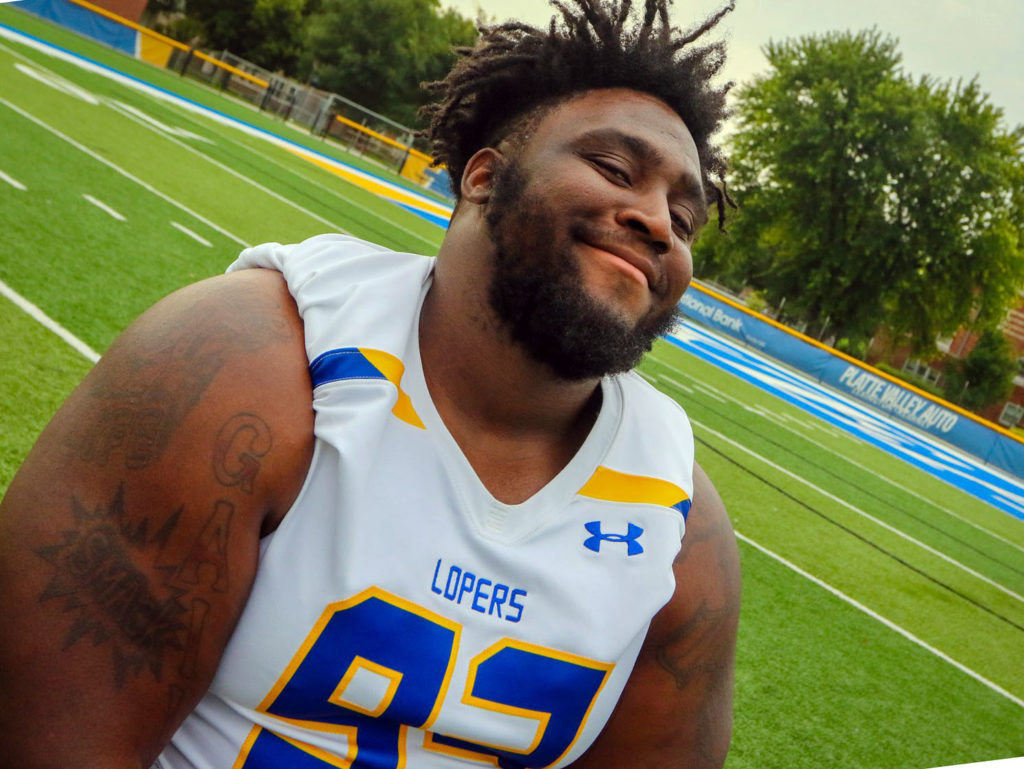 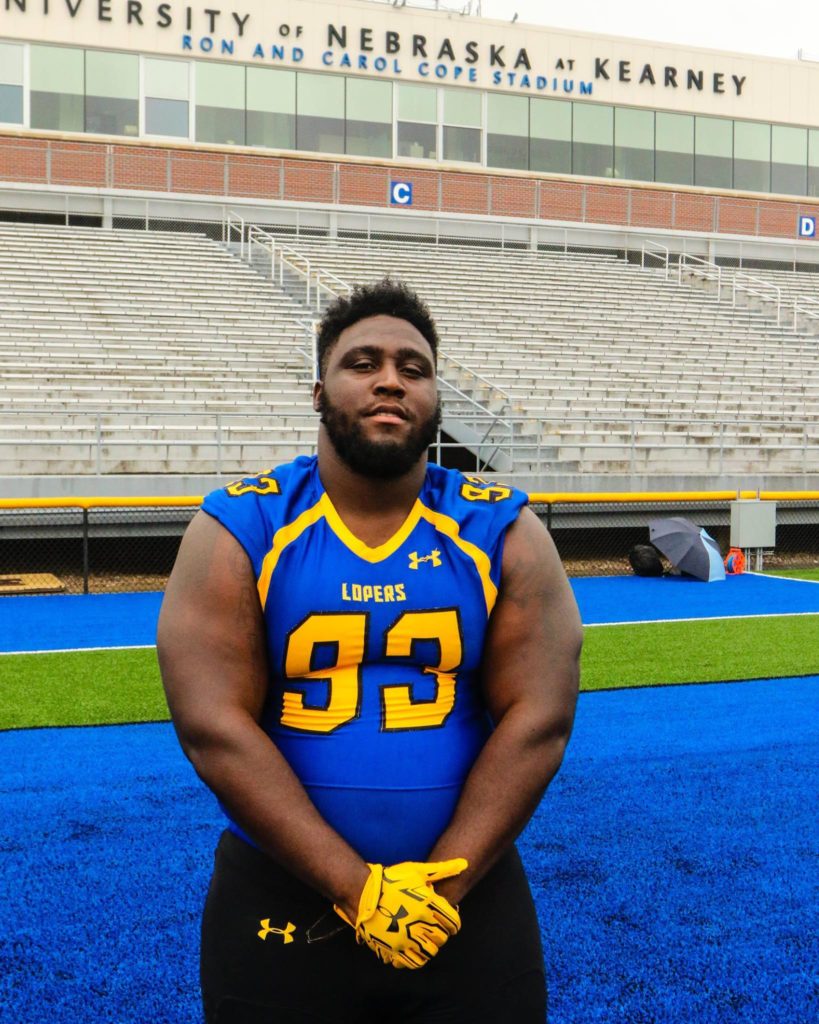 Homecoming royalty and UNK Athletic Hall of Fame inductees will be recognized during the game, and the UNK Sapphires Dance Team and Pride of the Plains Marching Band will perform.