KEARNEY – Bragging rights are definitely on the line Saturday (June 2) when 70 of the state’s top high school football players take the field for the annual Nebraska Shrine Bowl.

Rashawn Harvey, one of 12 coaches selected for the all-star showcase, expects everyone’s competitive spirit to take over once they step onto the artificial turf inside the University of Nebraska at Kearney’s Cope Stadium. 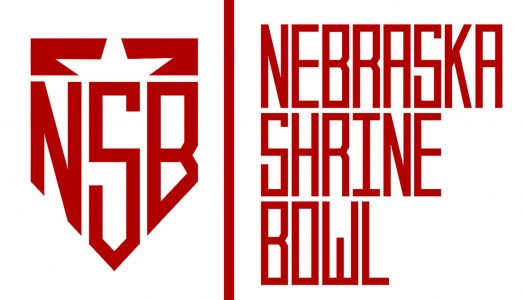 He also wants the participants to have a little fun and think about why the contest is organized each year.

Proceeds from the Nebraska Shrine Bowl support the Shriners Hospitals for Children system – 22 nonprofit hospitals across North America that provide specialized care for patients younger than 18. This treatment is offered at no cost to families.

“That’s the bigger purpose and the bigger goal, and it’s great to be a part of something like that,” said Harvey, a former UNK football player who works for his alma mater as assistant director of TRIO Student Support Services.

“You see the impact the Shriners have on patients across the country,” he added. “You realize it’s bigger than the game.”

The third-year Kearney Catholic head coach knows firsthand how football can change lives for the better.

“I look at football as a way to give back. … Football was the vehicle that ultimately allowed me to get a college degree. Without football, I probably wouldn’t have left Stuart, Florida,” Harvey said.

The 43-year-old grew up in the small Atlantic Coast city about two hours north of Miami. His grandparents only attended school through the fifth grade and nobody in his family had graduated from college.

Football gave Harvey the opportunity to take a different path.

UNK started its pursuit of the high school prospect late in the process, contacting Harvey about a week after a playoff game during his senior season. But Tampa, Florida, native Darrell Morris, then the offensive line coach for the Lopers, said all the right things.

“He was a little different from everybody else who was recruiting me,” Harvey said. “The first time we talked on the phone, we talked football, then after that we didn’t talk football. We talked getting your degree.”

Harvey, who had already used all his official visits, committed to UNK sight unseen. The trip to Nebraska ahead of two-a-day practices served as his introduction to the Midwest.

It’s a story he still gets a kick out of.

The family – Harvey and his father, stepmother, brother and cousin – was somewhere in Kansas. Dad was behind the wheel and Harvey was taking a nap when he awoke to the sound of screeching tires and sight of a cow standing in the road.

“That was my ‘welcome to the middle of America’ moment right there,” Harvey said with a laugh.

Loose livestock aside, the freshman football player quickly realized there are perks to Nebraska life. Kearney was a safer environment than his hometown, and his family was happy to see him far away from the potential pitfalls back in Florida.

“They didn’t want me to go back and fall into any traps and not be successful, not get a college degree,” Harvey said. “Coming from my family, there was just a push that you need to earn a degree if you’re going to make something of yourself down the road.”

Harvey, who played along the offensive line for UNK, received support from his Loper teammates and coaches – “They didn’t just get me here and forget about me,” he said – as well as his future wife Jennifer, a Minden native and director of the Thompson Scholars Learning Community at UNK. 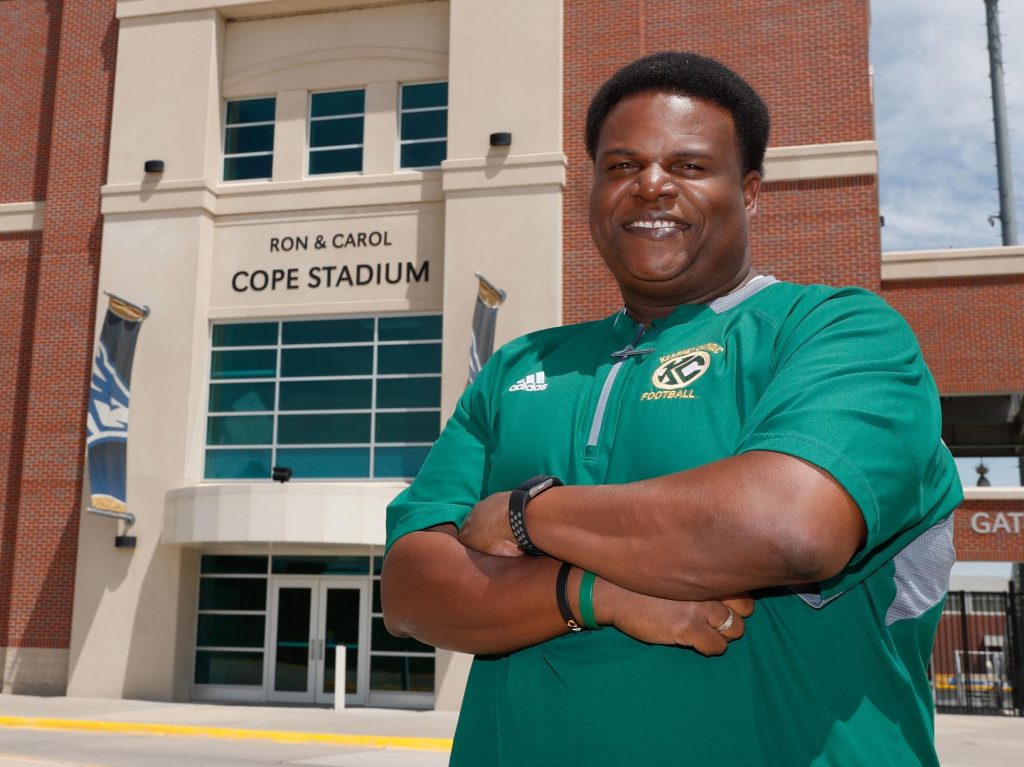 Harvey was introduced to TRIO during high school, when he spent two summers at Florida State University through the Upward Bound Program, and continued receiving the academic services during his time at UNK.

After earning his bachelor’s degree in middle grades natural and social science education in 1998, he worked as a teacher at Kearney Catholic and underwriter and benefits specialist at Principal Financial Group before accepting a position with UNK’s TRIO Student Support Services.

“It’s a great opportunity to give back to a program that gave to me and pushed me,” Harvey said.

The program assists first-generation, low-income and disabled students by providing academic tutoring, mentoring, financial guidance and other support during their pursuit of a college degree.

In addition to influencing students from disadvantaged backgrounds, Harvey’s job inspired him to pursue a master’s degree in instructional technology, which he received in May 2016, the same month he was named head football coach at Kearney Catholic.

Harvey, who was an assistant coach for Kearney Catholic for 13 years, led the Stars to the Class C-1 playoffs the past two seasons. They reached the state semifinals in 2016.

He will be joined at the Shrine Bowl by two of his former players – quarterback Matt Masker and wide receiver Brett Kaiser. The Kearney Catholic trio are part of the South squad coached by Aurora’s Kyle Peterson.

Huffman spent a decade as an assistant at Omaha Burke before becoming head coach at Fort Calhoun in 2008. He took the Pioneers to the Class C-1 playoffs three times in five seasons, then left for Bellevue West in 2013.

Bellevue West has reached the state playoffs all five seasons under Huffman, winning the Class A title in 2016.

GAME AND PARADE INFO
The 60th annual Nebraska Shrine Bowl will be played 2 p.m. Saturday (June 2) at Cope Stadium on the University of Nebraska at Kearney campus.
Tickets can be purchased online at neshrinebowl.org or at the gate on game day.
The Shrine Bowl Parade begins 10 a.m. Saturday at the corner of Railroad Street and Central Avenue in downtown Kearney. The parade route runs north on Central Avenue to 24th Street, west on 24th Street to First Avenue, then south on First Avenue to Railroad Street. 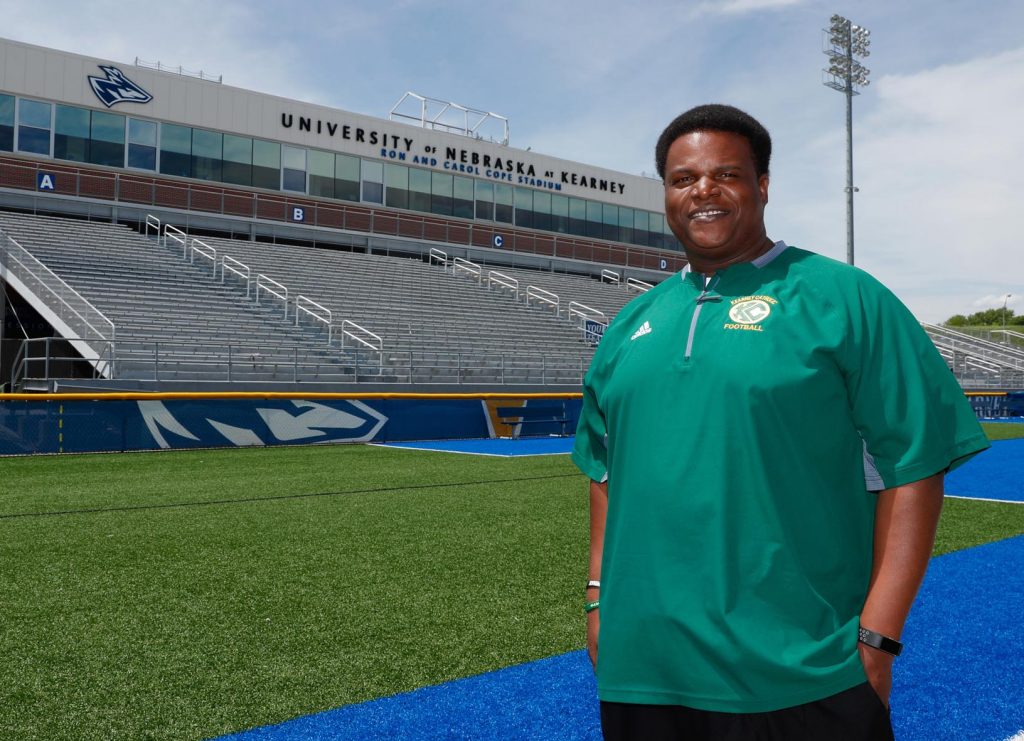