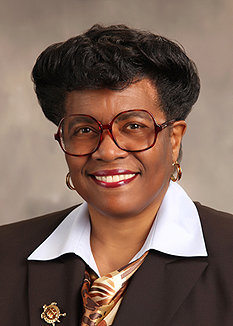 KEARNEY – Barbara Johnson, University of Nebraska at Kearney Vice Chancellor for Business and Finance, will leave UNK in May 2016.

Chancellor Doug Kristensen informed campus on Monday of Johnson’s decision to pursue other opportunities, and said a search would begin for her replacement.

“Barbara has provided valued leadership during her tenure – a truly transformative span of years for our campus,” Kristensen said.

She joined UNK in 2007 and has overseen all business functions at UNK, spanning budget and finance to facilities, police and parking, food service, Antelope Bookstore, creative services and human resources.

Johnson began her university business career at Florida State University in 1984, where she served as associate director, and then director, of University Business and Financial Services. In 1990, she became director of the Accounts Payable Division at The Ohio State University, and from 1994 to 1997 she was assistant controller at Ohio State. In 1997, she became vice president for Finance and Administration at Mars Hill (North Carolina) University. She became the vice president and treasurer of Carleton College in Northfield, Minn., in 2000.

Before beginning a career in higher education, Johnson held management positions with the Allstate and Prudential insurance companies, and with the Florida State Department of Insurance.