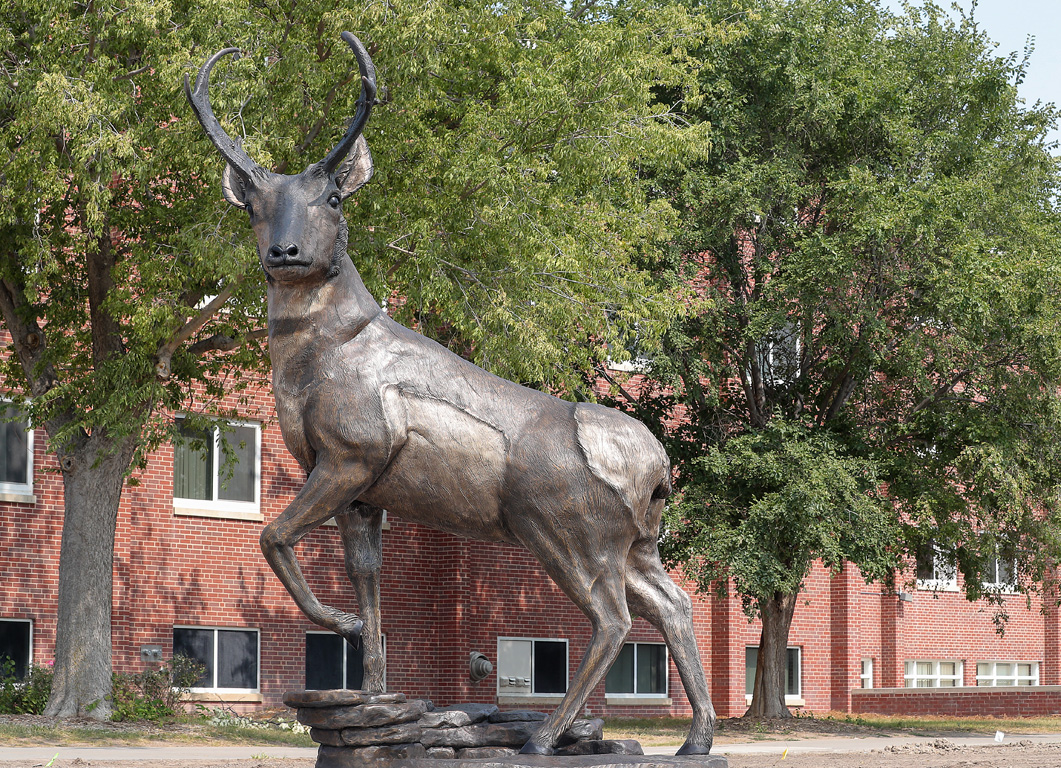 KEARNEY – Mark Lundeen doesn’t have an official name for his latest creation.

He simply calls it “The Loper.”

That’s a fitting title for an extraordinary piece that will become an instant landmark on the University of Nebraska at Kearney campus. The 10-feet-tall, more than 1,200-pound pronghorn antelope sculpture was installed Tuesday near the west edge of Randall Hall.

“This sculpture will provide an iconic place on our campus for people to gather,” said UNK Chancellor Doug Kristensen. “It will inspire some, and others will reflect upon their experiences on campus, but for everyone it will serve as a point of Loper pride.”

A centerpiece of the new 26th Street Mall area – where the Otto Olsen building once stood – the bronze pronghorn proudly posing for passersby is highly realistic in every way but one.

A typical pronghorn is about 3 to 3 1/2 feet tall, weighing 80 to 150 pounds. It’s the second-fastest land animal in the world, reaching speeds around 60 mph, and can detect movement up to 4 miles away using its phenomenal vision.

Funded by private donations, Lundeen’s version of the school mascot was already catching the attention of students, who snapped photos and recorded videos as they walked by. He called it an honor to create such an important piece for his alma mater.

“It’s a nice focal point for campus and all the new development going on,” Lundeen said. “I just hope everybody enjoys it.” 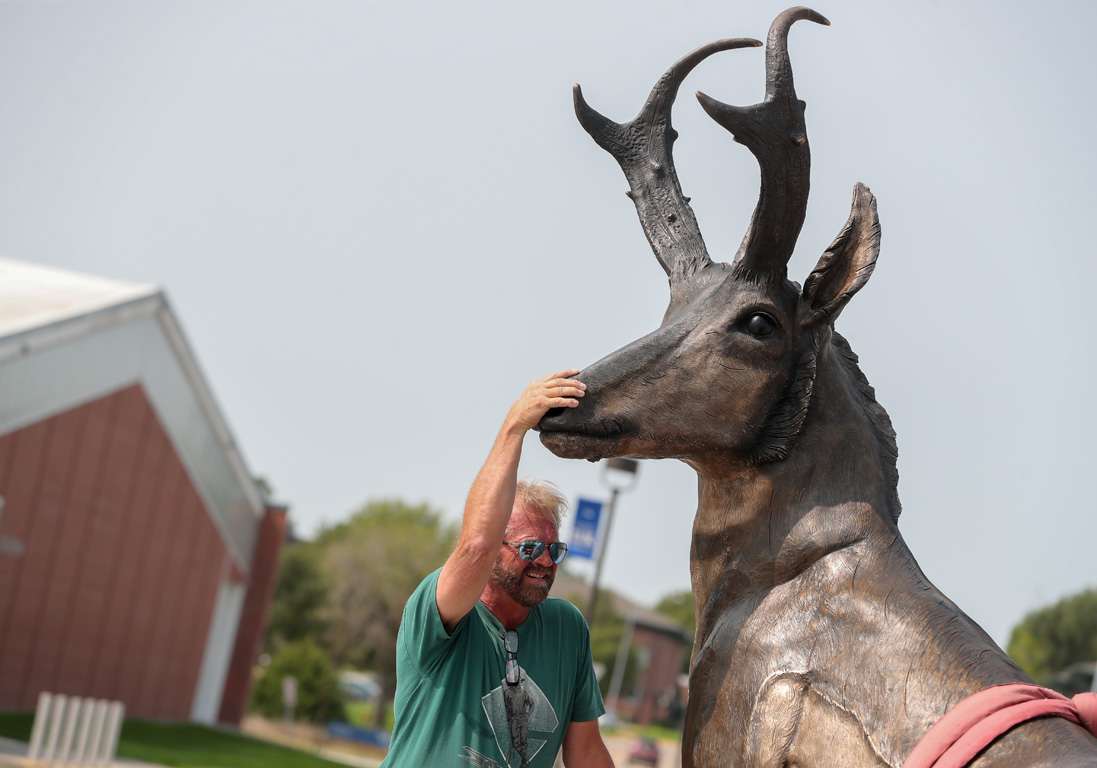 A Holdrege native, Lundeen graduated from UNK in 1981 with a bachelor’s degree in business administration, then moved to Loveland, Colorado, where he established his studio and began a highly successful career. He’s received numerous honors, including the UNK Distinguished Alumni Award and Allied Artists of America’s Philip Isenberg Award, and his work has been commissioned for placement at professional sports stadiums, the Little League Baseball and McDonald’s headquarters, Denver International Airport and other prominent locations across the country. His most notable piece is a sculpture of Apollo 13 astronaut Jack Swigert installed in the U.S. Capitol Visitor Center as part of the National Statuary Hall Collection.

“Mark Lundeen is a world-class sculptor and proud UNK alumnus,” Kristensen said. “Having a definitive piece of his artwork in such a visible location will benefit campus for generations.”

Beyond his artistic ability, Lundeen is also an athlete who played football for UNK, known then as Kearney State College. He continues to support the program by donating pieces for the annual Loper Football Backers banquet and scholarship fundraiser.

Using a much smaller model he originally created in 2008, it took Lundeen about eight to 10 months to finish the pronghorn. Then, ironically, he passed the project off to a former Fort Hays State football player.

A first team All-American for the rival Tigers, Tony Workman is the general manager at Art Castings of Colorado, a Loveland-based bronze foundry where the statue was cast. His daughter Shelby played volleyball for UNK from 2008-11.

“You guys picked one of the best sculptors in the country. There are a lot of people who sculpt, but not a lot of them who put out this quality of work,” Workman said of Lundeen.

Workman admitted the bronze pronghorn is a great addition to campus. “But it’s really tough for me to do this Loper stuff,” he said with a grin.

Current and future UNK student-athletes will walk past the sculpture on their way from the Health and Sports Center to Cope Stadium.

Landscaping of the 26th Street Mall started this week and will be completed this fall. The area west of Cope Fountain can be used to host events, with possible recreational uses. A dedication ceremony for the new sculpture will be scheduled as part of this year’s homecoming festivities, Oct. 24-29.