UPCOMING EVENTS
The UNK track and field teams will compete Friday through Sunday (May 3-5) at the MIAA Outdoor Championships, hosted by the University of Central Missouri in Warrensburg.
The final home event of the season is the Loper Last Chance Twilight, scheduled for 3 p.m. May 12 at Kearney High School.

Bartling, Barth and Co. leading the way for Lopers

KEARNEY – At the University of Nebraska at Kearney, there’s a tried-and-true formula for developing top-notch track and field throwers.

Find big, strong country kids with a solid work ethic, pair them with coaches who can fine-tune their technique, and repeat year after year.

This strategy has worked wonders over the past two decades – and the current group on the UNK men’s track and field team is no exception.

The Lopers currently have the top-ranked shot put team in Division II, according to the U.S. Track and Field and Cross Country Coaches Association, and the discus squad is ranked No. 4 nationally.

“There’s an expectation of success in that group,” said Bonsall, who is in his 12th year with the UNK track and field program. “I expect them to be their best when their best is needed.”

Tanner Barth, a redshirt junior from Utica, knew the bar would be set pretty high when he committed to UNK. He and Loper teammate Andrew Heine, a senior from York, both attended Centennial High School, where UNK throws coach Dane Tobey holds school records in the shot put and discus.

Tobey, in his seventh year as an assistant coach under Bonsall, is among the most decorated track and field athletes in UNK history. The eight-time All-American was a national runner-up in the indoor shot put and a national champion during the outdoor season in 2010, when he was named the NCAA Division II Men’s Field Athlete of the Year and qualified for the U.S. Outdoor Track and Field Championships.

“He knows what it takes to be the best,” Barth said. “That creates an environment that makes you want to compete at the highest level. It kind of drives you.”

Motivation has never been an issue for the UNK men’s throwers, who challenge each other in every aspect of the sport.

“When I came in, I had really good upperclassman leaders,” said Jacob Bartling, a redshirt senior from Elm Creek. “Those older guys pushed us in the weight room.”

Bartling describes practices as a focused, yet fun environment where guys are cheering their teammates on while also working hard to outdo each other.

“The weight room guys love the throwers,” Bonsall said. “They get in there, they move a lot of weight around and they’re excited about doing it. You don’t have to generate that energy, they bring the energy into the room with them.”

That competitiveness shows up in the numbers.

Bartling has qualified for the NCAA Division II Championships four times in the shot put and twice in the discus, and he’s in good position to make another appearance in both events later this month. He earned second-team All-American honors in the 2018 outdoor and 2019 indoor seasons, finishing 10th and ninth, respectively, in the shot put.

While Bartling has his eyes on the UNK record book – “I know I’m capable of much more,” he said – Barth has been watching his teammate’s success.

“Every year I want to be right there with Jake,” Barth said. “I want to go to the national meet with Jake and I want to throw what Jake’s throwing. I see him do it and I get excited and I want to feel that.”

He climbed to No. 8 on UNK’s outdoor shot put list with an effort of 56 1/2 at last week’s Prairie Wolf Invitational hosted by Nebraska Wesleyan University. The Lopers claimed the top four spots in the shot put at that event and finished 1-2 in the discus.

Along with Barth, Bartling and Heine, whose hammer throw (185-3) ranks seventh in UNK history, graduate transfer Zach Brittain added another level of firepower in 2019.

At Grand Island Central Catholic, Brittain won the 2014 Class C state championship in the shot put and discus, edging Bartling for the all-class gold in the discus.

Bartling admits he “wasn’t super-thrilled” when Brittain transferred to UNK, but he soon learned the addition of another big-time thrower would benefit the entire team.

“He really contributed to our drive,” Bartling said. “It pushed me to have a great summer in the weight room.”

“We’re one big group of friends,” said Barth, who needs one big toss to join his teammates at the NCAA Championships in late May.

And they’re all focused on the same goal – proving they’re the most dominant group of throwers in Division II.

“Being part of the best crew in the country means something,” Barth said. “It brings out a little bit more of that competitive edge.” 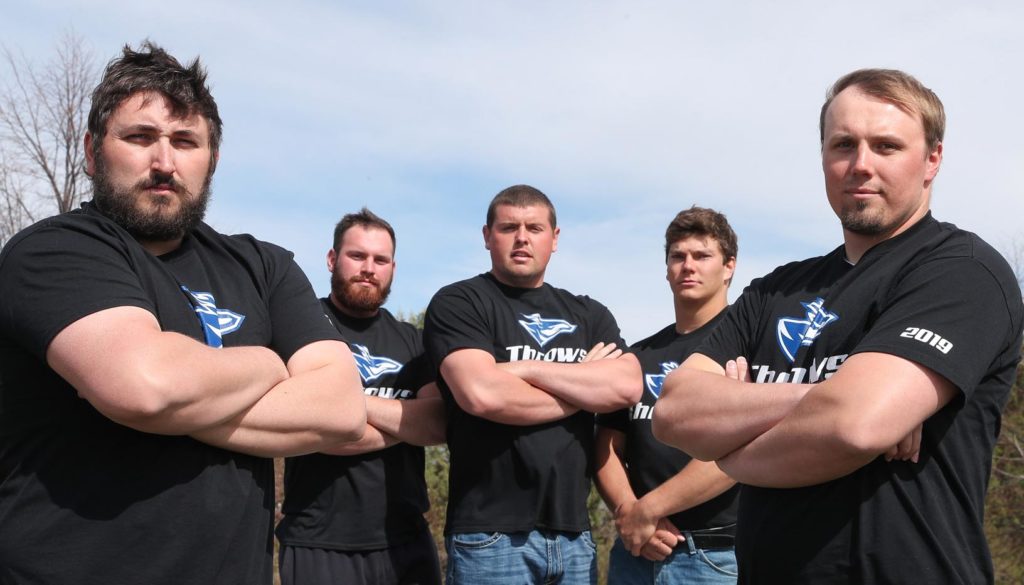