KEARNEY – When Laurinda Weisse tells people her job title, she usually gets the same response.

They nod their head and say, “uh-huh,” while secretly wondering what the heck an archivist is.

Weisse, who has held the position at the University of Nebraska at Kearney since October 2014, is more than happy to elaborate.

“I’m basically a librarian for the rare and unique, special, one-of-a-kind items on campus,” she said.

Think of her as UNK’s mother, with the office space she occupies on the second floor of Calvin T. Ryan Library serving as the campus attic.

That’s where many of the keepsakes, mementos and historical items from the school’s 113 years of existence are kept. They fill cardboard boxes, manila folders, file cabinets, metal shelves and nearly every inch of counter inside the small room that’s mostly hidden from library patrons perusing the stacks or studying at nearby tables.

“You never know what you’re going to find in here,” said Weisse.

The 30-year-old works with the university archives every day and can still be surprised by what’s uncovered.

There’s a letter signed by former President Dwight Eisenhower when he was invited to the school’s 50th anniversary celebration and photographs of John F. Kennedy and Richard Nixon taken during their visits to Kearney.

A cowboy hat and frilly outfit worn in the late 1950s by a member of the school’s Wagoneers cheer squad rest on a shelf next to old Loper pennants and below a large collection of insects gathered by faculty and preserved in glass-covered cases. The bugs, which were “rescued” from the basement of Bruner Hall of Science prior to renovations, are among the weirdest items in the archives, according to Weisse.

Some of the most expansive are the documents left behind by former director of media communications Glennis Nagel – they’re packed away in 19 boxes plus a file cabinet – and approximately 40,000 photos taken by longtime public relations and sports information director Don Briggs during his time with Kearney State College.

The obnoxious orange carpet covering the floor has even become part of UNK history. Weisse cut out a piece and tucked it away so the interior design decision will never be forgotten.

“Even if they replace this, we do have a chunk of the orange carpet forever,” she said.

As an archivist, she gathers enough information to accurately describe each item, but her primary tasks are overseeing and growing the collection and helping students, faculty and the general public find what they’re looking for.

After starting at UNK, she established new policies for using the archives and acquiring materials, and an online database was created to make it easier for people to search for specific items.

Weisse has received some “pretty quirky requests” over the past 3 1/2 years. A composer in the Czech Republic wanted the score for a song inspired by the blizzard of 1888 – the UNK archives contain one of the few remaining copies – and the FBI has contacted her to verify an employment record from the mid-1970s.

“I’m still curious about that,” she said of the federal inquiry.

Although there are already thousands of items in the archives, which cover the history of UNK, education as a whole and central and western Nebraska, another important part of the job is finding new things to add.

Weisse said it’s critical to build relationships both on campus and in the community so people know about the collection and its purpose.

“That’s been a big component of what I’ve been doing,” she said.

This work is paying off.

A couple years ago the UNK Alumni Association contacted Weisse after someone dropped by with a piece of the old gym floor from Cushing Coliseum.

“Twenty minutes later a guy backs up to the library with a 200-pound chunk of the floor,” Weisse explained.

“It’s almost as tall as I am. It just barely fit in the elevator,” the 4-foot-11 archivist added.

Weisse recently spoke at a Delta Kappa Gamma meeting, which led to the donation of Nebraska State Reading Association pieces, and she regularly interacts with people through social media.

“A lot of it is making those connections,” Weisse said.

She still receives plenty of items from retiring faculty and staff, but those boxes people pull from their basements and garages can be the most interesting.

“We do get some pretty random stuff,” Weisse said while holding a book of wallpaper samples with dozens of newspaper clippings pasted inside – a photo of John Pesek, a professional wrestler from Ravenna nicknamed the “Nebraska Tiger Man,” an article announcing the interstate’s arrival in central Nebraska and a story detailing the 1968 murder of a Fullerton businessman.

“We got someone’s kitchen supplies once,” Weisse noted. “The box was labeled yearbooks, tablecloths and kitchen utensils. I thought they were just reusing the box – that was not the case.”

Items that don’t fit UNK’s collection are shared with other organizations, such as the Trails and Rails Museum in Kearney.

Yearbooks are donated fairly regularly – at least one copy of every edition from 1908 to 1990 can be found in the archives.

“They’re more interesting to us if they’re annotated,” Weisse said. “That’s one difference between us and the main book collection, is we actually want the books that have something written in them.”

There’s also plenty of sports memorabilia, including photos of the football team from the early 1900s that were recently acquired and shots of the championship baseball team from 1907 wearing Western State Normal School jerseys, as well as student records dating back to the school’s beginning.

A major obstacle for the archives is the shift to digital information.

“That’s a constant struggle for us,” she said, adding that nobody wants someone else digging through their emails for historically significant items.

The middle ground is convincing people to voluntarily share this information, which is why Weisse wants everyone to know about the archives.

“If nobody documents these things, our campus history will be forgotten,” she said.

Weisse is currently working on a series of aerial photographs of Buffalo County taken in 1938, a project that will eventually expand to cover the entire state. She’s also converting a collection of oral histories, currently on cassette tape, and other materials related to country schoolhouses and scanning underground student newspapers dating from the late 1960s to 2008.

She’d like to create digital versions of every edition of The Antelope student newspaper, but the process takes time and money.

“We’re never going to be able to digitize everything,” she said.

Another issue is finding ways to convert obsolete formats, such as 5 1/4-inch floppy disks and 16-millimeter film.

There’s footage of the 1957 homecoming parade, former college presidents’ speeches and football games from the 1940s and ‘50s that Weisse hasn’t been able to view.

“Until we have funding to send those to somebody who can deal with them, we won’t know exactly what’s on them,” she said.

About 30 audio and video recordings sit in the archives in this mysterious state, and their elusiveness makes them some of Weisse’s favorite items.

“It’s the little mysteries that are also intriguing,” she said.

MORE INFORMATION
Browse the UNK archives online at library.unk.edu/archives. For more information on how to contribute to the collection, contact Laurinda Weisse at 308-865-8593 or weissell@unk.edu. 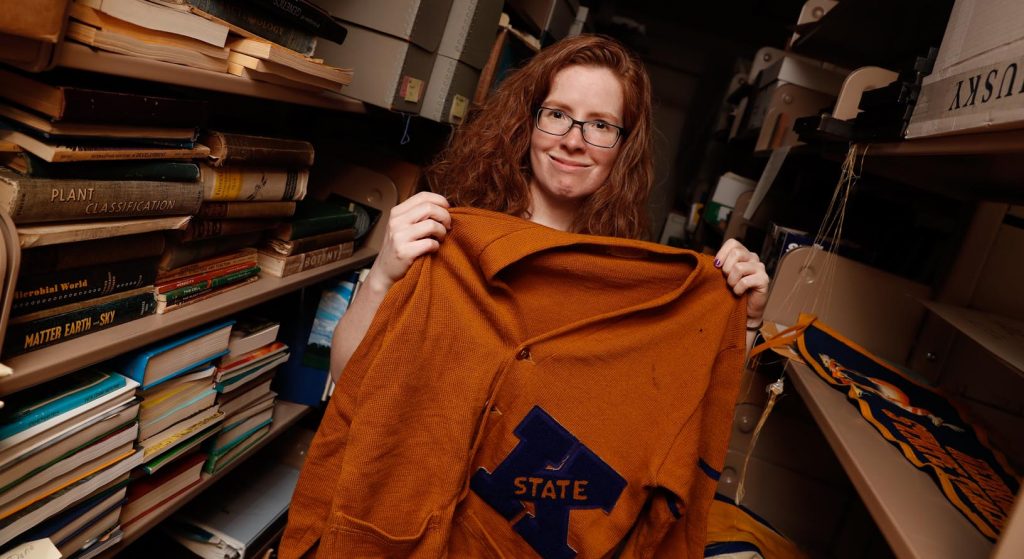 One thought on “Archivist Laurinda Weisse preserves UNK history, including the carpet”