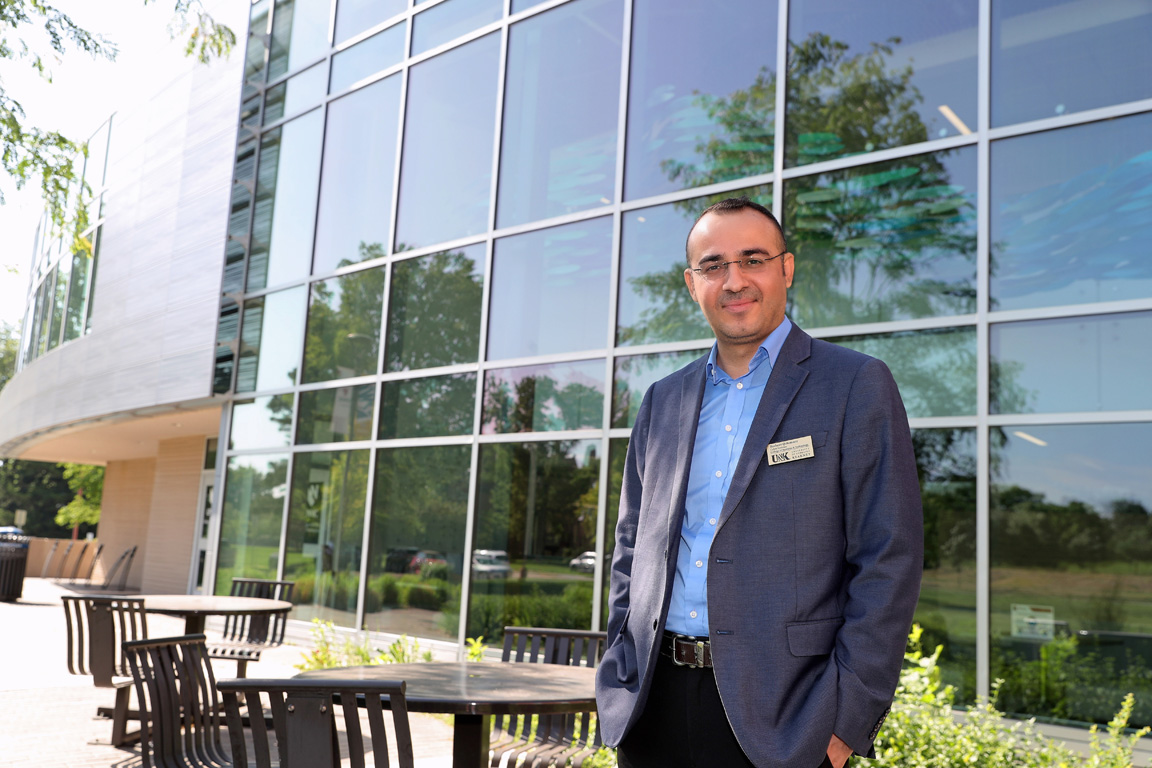 Qolomany (pronounced Ko-lo-MAN-ee) wasted no time when he arrived at the University of Nebraska at Kearney in August 2019. An assistant professor in the Department of Cyber Systems, he quickly cast about looking for projects and teams in which his skills in artificial intelligence systems and deep learning could be useful. Qolomany’s research work is interdisciplinary, and it lies at the intersection of complex systems, metaheuristic, artificial intelligence, machine and deep learning, and their applications in support of population health and smart services.

Soon, he was part of teams composed of researchers from all four University of Nebraska campuses, leveraging his knowledge in how to collect and analyze massive amounts of data to solve contemporary problems in the health care arena.

One project involved thinking about the SARS COVID 2 pandemic as a complex system – difficult to predict due to the interactions of many independent yet interconnected components. The team proposed to develop a system that combined information from social media posts, public health data, information harvested from devices such as smartphones, and health data apps. This giant data set could yield information about who and what are the most important influencers and disseminators of information, which then could be used by public health officials and others to develop policies and guidelines.

The team’s proposal was one of eight internationally to earn an honorable mention in the $500,000 Pandemic Response Challenge run by the XPRIZE Foundation, which designs and operates incentive competitions to solve the world’s grand challenges. Nearly 500 teams worldwide entered the competition.

While their work focused on Nebraska, their model could be scaled up regionally or globally. Their data-driven model offered rationales for efforts such as school or business closures used to halt the pandemic.

One notable part of the project was how quickly the team came together, developing the proposal in just two weeks to meet the first November 2020 deadline. Of 500 entries, 48 were asked to submit for a second round in February 2021. The Nebraska proposal ended up in the top 10.

Although ultimately unsuccessful in getting funded, Qolomany said the project was notable in that it showed how quickly the Nebraska team came together for the common purpose. While the amount of data collected for the demonstration project was small, it was surprisingly accurate, he said.

The project proposed using machine learning and artificial intelligence (AI) to collect and analyze the data that would support action plans to minimize case numbers and costs. While AI will not replace the final human analysis, he said, it can be used to sort through the data, identify patterns and anomalies, and help scientists predict what interventions could help or hinder.

Qolomany also is part of a cross-university team working to help patients with peripheral artery disease (PAD), a common cardiovascular disease that causes pain in the lower legs and can be debilitating.

Qolomany’s team, working with a two-year, $149,405 University of Nebraska Collaboration Grant, hopes to develop a wearable device that would analyze real-time changes in a patient’s gait that could be indicative of the disease’s progression. Currently, gait changes are assessed only in the clinical setting – at the patient’s doctor’s offices and only periodically. By collecting real-time data, a doctor could note whether the disease is getting worse, or whether treatments are successful.

The disease afflicts about 10% of Americans older than 40 and is particularly common among veterans, Qolomany said. It is difficult to detect, often misdiagnosed as arthritis or ascribing to “aging,” but PAD can cause significant debilitation and advance to amputations. Being able to detect, monitor and manage the disease is important, he said.

Changes in gait are symptoms of many diseases, such as Parkinson’s.

Developing an approach using wearable sensor technology and machine learning to extract multiple gait characteristics such as swing time and step time variability from the collected data could be helpful in diagnosing and monitoring the progression of chronic diseases affecting human movement, he said.

Qolomany noted that many folks already, sometimes unknowingly, are collecting health data through apps on their smartphones. And this could be amassed into huge data sets and analyzed by artificial intelligence.

Some worry about the privacy implications of all that data – who is using it, and how they are using it. Qolomany doubts artificial intelligence will advance to the stages where it will replace humans in the near feature due to existing challenges, but that doesn’t mean it will always be impossible.

“AI can do the boring tasks, but it will not replace the human mind,” he said. “I am not sure in the near future it will reach the level of whether the robot can reach into and replicate human emotions because modeling human behaviors is extremely challenging due to the complex physiological, psychological and behavioral aspects of human beings. Some tasks don’t need to be done perfectly, and those automation tasks are what AI does best.”

He described these as “artificial narrow intelligence,” where any AI can outperform a human in a narrowly defined and structured task. It is designed to perform a single function such as an internet search, face recognition or speech detection under various constraints and limitations.

He also notes that humans design the problems that AI is asked to work on, so it’s critical that the parameters and rules in which the computer is working are well designed.

Qolomany said this type of work, solving problems for real people, has much appeal for him. He earned his undergraduate degree in computer science in his native Iraq and came to the United States in 2014 for graduate school. His Ph.D. adviser at Western Michigan University, Dr. Ala Al-Fuqaha, encouraged him to choose quality research over quantity of research, and to search for projects that have deep impact on people versus solving arcane or trivial computer science problems.

And he says his department chair at UNK, Dr. Liaquat Hossain, has been an excellent mentor in helping him look for holistic, complex approaches to problems.

He believes analyzing huge real-time data streams will eventually allow doctors and others to predict, diagnose, intervene and treat all sorts of health issues, and being part of that solution is deeply rewarding. 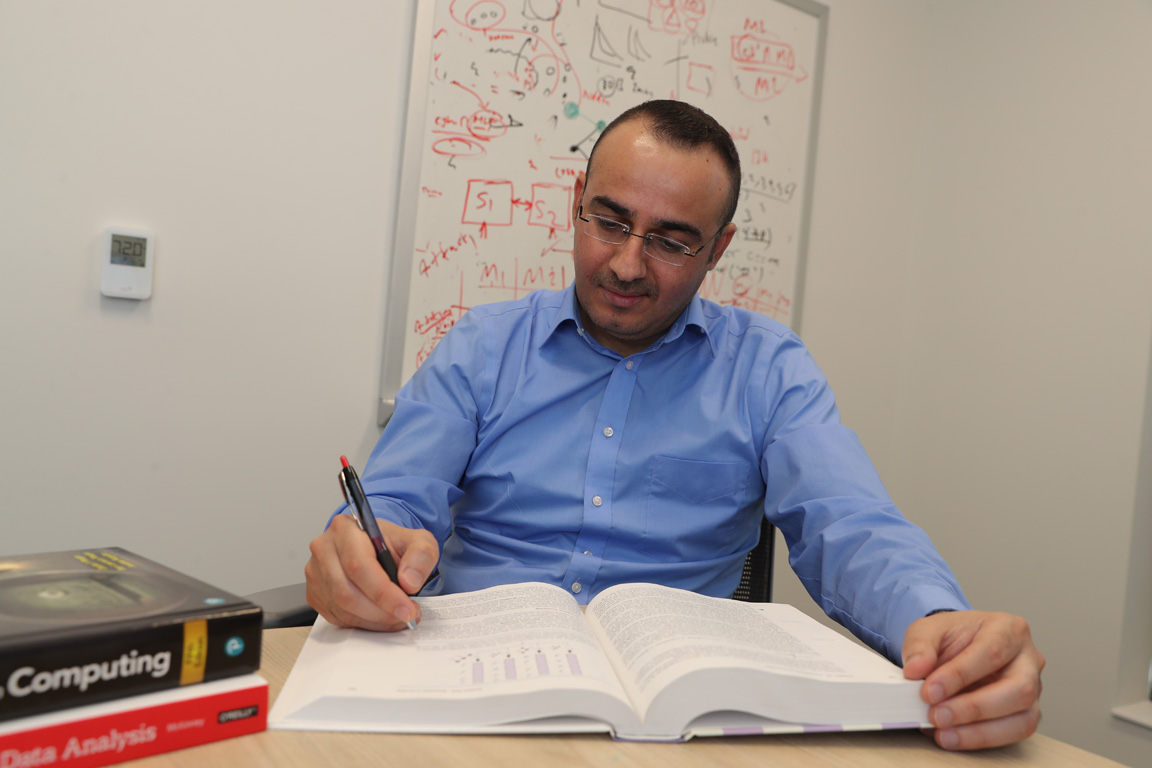 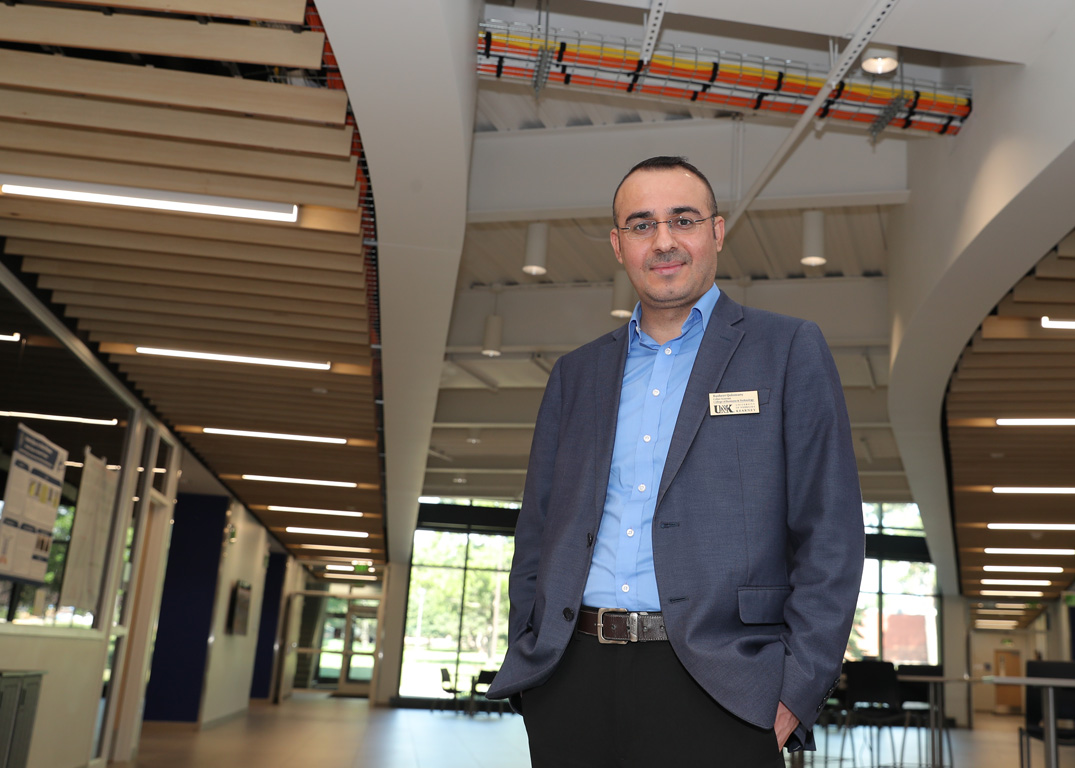