APPLY TO THE KLOP PROGRAM

KEARNEY – When Max Beal graduates from the University of Nebraska College of Law, he won’t be looking for a job in Lincoln or Omaha.

The 24-year-old plans to practice in central Nebraska, where he was raised on a farm near Kenesaw.

“It’s really important that people have access to legal resources,” Beal said. “There are a lot of counties in western and central Nebraska that have no lawyers or very few lawyers. That’s where I’m from, so I want to help those people.”

According to the most recent statistics from the Nebraska Supreme Court’s Attorney Services Division, 50 of the state’s 93 counties have five or fewer attorneys practicing there and 11 counties don’t have any at all. The shortage in these rural areas means people may have to travel long distances for legal assistance.

“If you’re a person who wants to adopt or start a new business, needs help on a will or advice about the farm or someone who’s going through a divorce or been in a criminal matter, you need an attorney. And if you have to drive 150 miles to get one or maybe try to do it remotely, that’s a disadvantage,” said Chuck Rowling, a professor and pre-law adviser at the University of Nebraska at Kearney and chair of the Department of Political Science.

Beyond that, he added, attorneys are often pillars of the community who serve on local boards, add to the economy and support a town’s long-term viability.

“They’re providing a service that becomes vital to those communities,” he said. “There’s a broader benefit that comes to the region when we have attorneys working in those places.”

In addition to his other duties, Rowling is director of an initiative created six years ago to address this rural workforce issue.

A partnership between UNK and the Nebraska College of Law, the Kearney Law Opportunities Program (KLOP) recruits students from greater Nebraska – outside Lincoln and the Omaha metropolitan area – and trains them to become lawyers who will practice in rural communities. Participants receive a full-tuition scholarship to attend UNK and guaranteed acceptance into the College of Law, provided GPA and Law School Admission Test (LSAT) requirements are met. Starting next year, the program will also include a partial room waiver for those students living on campus.

There are many other benefits, as well.

“UNK is a lot smaller than a lot of universities, and I think that’s really helpful,” said Beal, who was part of the inaugural KLOP class. “You get more attention and you have a better opportunity to get to know the faculty. They’re really invested in us.”

Beal is one of eight students currently attending the College of Law in Lincoln who were part of the KLOP program at UNK. These students “stack up pretty well” compared to their classmates from across the country, with former Lopers earning multiple academic awards for achieving the highest grade in their courses.

“Those are pretty prestigious awards that Kearney students are getting,” Beal said.

He credits UNK for providing the resources and opportunities that prepare students for law school.

Students in the KLOP program receive one-on-one mentorship from faculty and peers. They study together and take many of the same classes, creating a close-knit community and support system. The Pre-Law Society, a student organization on campus, regularly hosts events where members connect with local attorneys, current law students and each other.

Participants also develop a relationship with the Nebraska College of Law as early as their freshman year by visiting Lincoln to meet with faculty and law students, attend guest lectures, sit in on classes and observe court proceedings.

“It’s what they do outside the classroom that’s really going to separate these students and make them even better prepared for law school,” said Rowling, who emphasizes undergraduate research, international travel and other experiential learning activities.

He collaborated with the College of Law to launch a new international program for students at both institutions. In January, they’ll spend two weeks in Europe to learn about international criminal law while visiting places such as Auschwitz, the Palace of Justice in Nuremberg and the International Criminal Court in The Hague.

That trip will occur every two years, with an opportunity to learn about the civil rights movement in the Southern U.S. offered in between.

“Being exposed to ideas and cultures outside of what you’ve grown up with is valuable, because at the end of the day that’s what you’re going to be doing when you’re a lawyer is working with people with different backgrounds and different points of view,” Rowling said.

Internships are another important part of KLOP, whether they’re at a Congressional office in Washington, D.C., or a local law firm.

“If you’re in the KLOP program, there’s a priority given to those students for internship opportunities, especially with law firms in rural Nebraska,” Rowling said.

Norah Renner, a UNK senior from Columbus, is currently interning with Anderson, Klein, Brewster & Brandt in Kearney. The experience has been “extremely valuable” as she prepares to start law school next year.

“I love it,” Renner said. “I’m getting all the practical experiences and I’m learning a ton. You really get to see how attorneys can affect people’s lives here. That’s something I don’t think you get to see as much in a bigger firm or somewhere bigger like Omaha or Lincoln. There’s no question now that I want to come back to central and rural Nebraska to practice after law school.”

Like Beal, who interned at the Tye & Rowling law firm in Kearney, she’s benefited from the resources available through KLOP, including LSAT prep and assistance with law school applications.

“It’s just a really tight-knit community, and that’s what drew me to UNK. You get so much support,” Renner said. “I don’t feel like I’ll be too surprised when I get to law school.”

The pre-law program has “grown by leaps and bounds” since attorney Jon Brandt graduated from UNK in 2003.

“The first time I was in a private law office was when I was interviewing for a law job,” said Brandt, a partner at Anderson, Klein, Brewster & Brandt specializing in litigation, injury law, criminal defense and family law.

An Ogallala native and Nebraska College of Law alumnus, Brandt is proud to partner with his alma maters to further develop the state’s talent pipeline.

“It really is going to help sustain rural Nebraska by having lawyers available to serve these communities,” he said. 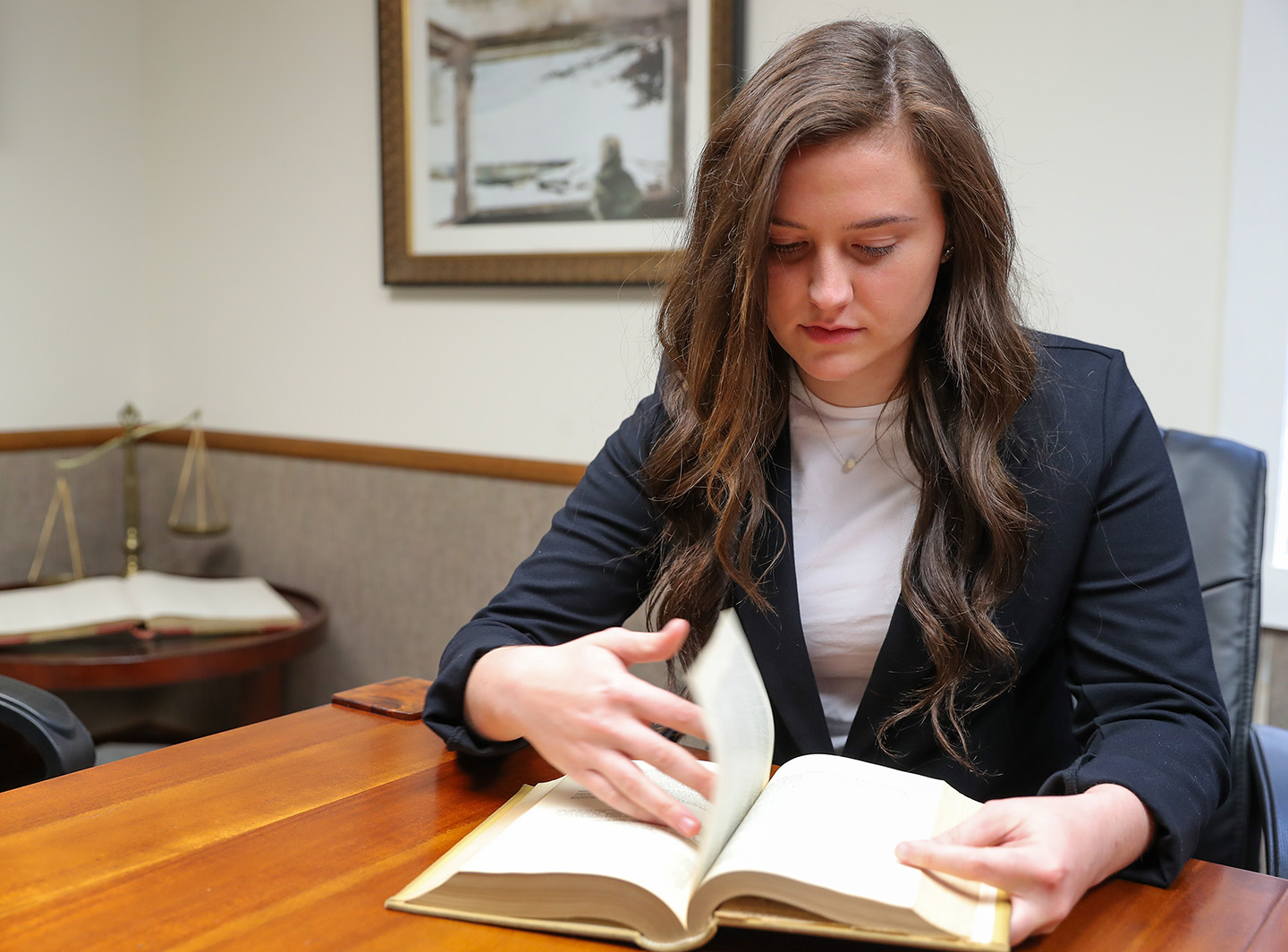 Students can major in any academic area and be part of KLOP.

“I wasn’t really sure what I wanted to do in college. I was interested in finance, so wherever I went I was going to study finance, but I also liked the idea that law provides more opportunities. I would have more choices in the career field and that was something I could get in addition to my finance degree to give me more job options,” Beal said.

“It really does open a lot of doors for you,” Renner noted.

The profession, Rowling said, is much more diverse than what people see in courtroom dramas on TV.

Currently, there are 20 UNK students in KLOP, but that number will soon grow to 30 and beyond as Rowling expands the program.

“The KLOP students that we bring in are so important to the university. They are student body presidents, they are in student government, they lead student organizations, they are terrific in class,” he said. “It’s almost like a version of what we think they’ll be down the road within their own communities. They are those things at this campus, serving as leaders and pillars within our UNK community.”

For more information on the Kearney Law Opportunities Program, visit unk.edu/klop or contact Rowling at 308-865-8171 or rowlingcm@unk.edu. The deadline to apply for next year’s class is Nov. 15.