The NCAA Division II Outdoor Track and Field Championships are scheduled for Thursday through Saturday in Allendale, Michigan. A livestream is available on ncaa.com with live results posted here.

KEARNEY – He’s just a redshirt sophomore, but Wes Ferguson is already establishing himself as one of the top middle distance runners in University of Nebraska at Kearney history.

His name appears next to five individual and relay records, and he’s making his third trip to the NCAA Division II Championships this weekend. 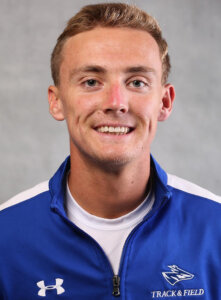 Not bad for someone who’s only been running track for five years.

At Fremont High School, he competed on the course as a freshman and sophomore before the track and cross country coaches suggested he make a change.

“I didn’t get pressured into it. It was 100% my decision, but everyone around me was saying, ‘Hey, this is definitely for the best.’ So I just trusted them and went with it,” Ferguson explained.

“And I should probably thank them now,” he added with a laugh. “I definitely don’t regret it.”

Ferguson made an immediate impact for the Tiger track and field team, winning the Class A state title in the 800-meter run as a junior and senior. He also won gold in the 400-meter dash and 1,600-meter relay in 2019 and twice finished second in the 3,200-meter relay.

For the record, he’s a pretty good golfer, too. Ferguson continues to play each summer with his father Tim, shooting a season-best 1-over 72 at Fremont Golf Club last year.

“They always told me I can golf for the rest of my life, which is true,” he said.

Ferguson knew he was “pretty good” coming out of high school, but even he’s been surprised by the level of success he’s achieved as a Loper.

“I definitely didn’t expect this much improvement,” he said, crediting personal maturation and strong teammates for the jump.

After redshirting for the 2019-20 indoor season, followed by an outdoor season canceled by the COVID-19 pandemic, Ferguson was ready to shine. He won the 800 during his first UNK competition, then set the school record at the next meet.

Ferguson claimed the first of three MIAA titles that season and qualified for the NCAA Division II Indoor Track and Field Championships in Birmingham, Alabama. His time of 1 minute, 51.06 seconds was good for seventh place at the national event, making him the fifth Loper man to earn All-American honors in the 800.

He’s been even better this year.

In January, Ferguson broke the NCAA Division II record at 1,000 meters, turning in a time of 2:23.8 at the Nebraska Graduate Classic in Lincoln. That performance earned him Division II men’s national athlete of the week honors from the U.S. Track and Field and Cross Country Coaches Association (USTFCCCA). No other Loper has received this award.

Ferguson broke his own school record in the indoor 800 two times in the following month and teamed up with Seth Simonson, Micah Swedberg and Luke Stuckey to set UNK’s new all-time mark in the distance medley relay (9:41.05).

At the MIAA Indoor Championships, he ran a personal-best 1:49.47 to win the 800 title and was part of the 4×400 relay team (Ferguson, Swedberg, Jack Drahota and Cole Willis) that posted a time of 3:15.62 to beat its own school record. The UNK men scored 97.5 points to place second overall, their highest-ever finish at an MIAA meet.

“As the season progressed, I kept getting stronger and more confident,” said Ferguson, who ranked fourth nationally in the 800 heading into the Division II Championships. “I realized there was no reason my name can’t be in the mix. Why not? I’m just going to go for it.”

Ferguson used a strong last lap to hold off a pair of competitors and win the 800 in 1:50.05, capping an undefeated season in the event and becoming the fifth Division II men’s national champion in UNK history.

The moment was “pretty insane,” he said, and the fact that his parents and girlfriend were there made it even more special.

“The picture that captured us hugging right after is something I was visualizing and dreaming about for a long time. It’s something that kept me motivated, and to actually be able to live that moment out was incredible,” said Ferguson, the USTFCCCA men’s indoor track athlete of the year in the Central Region. 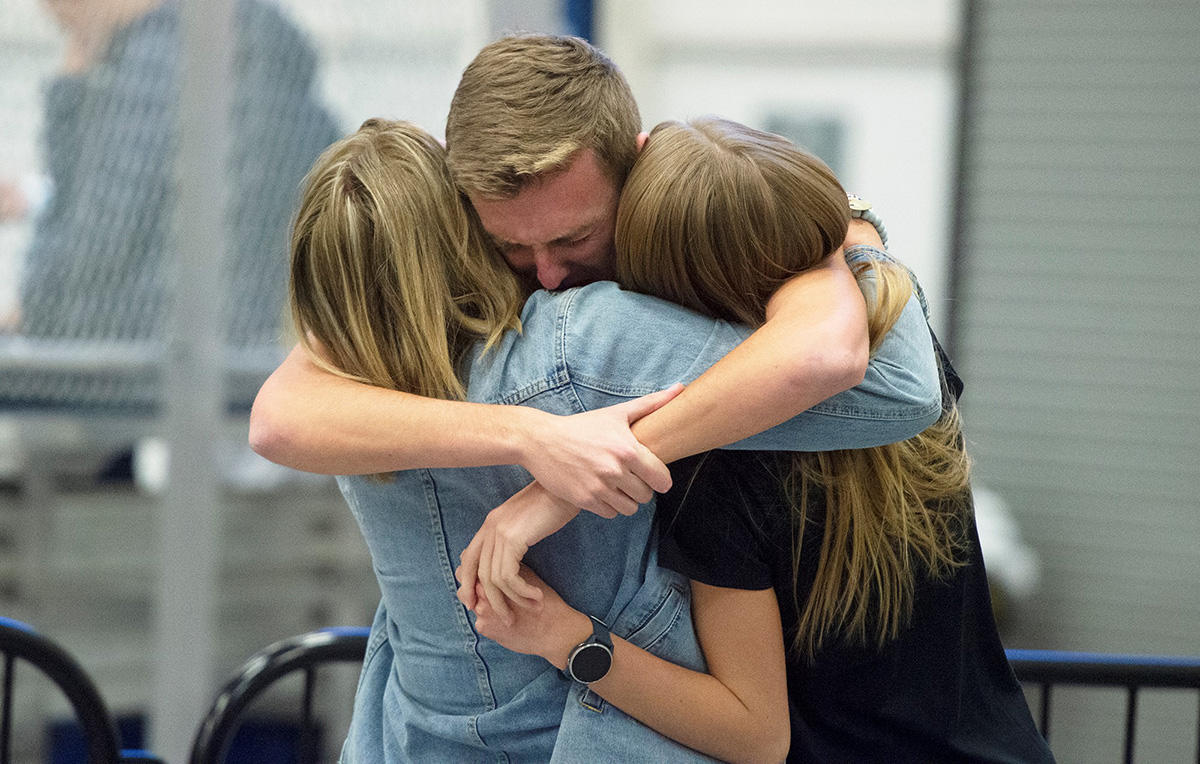 Ferguson has a chance to replicate that moment at the NCAA Division II Outdoor Track and Field Championships, which begin Thursday in Allendale, Michigan.

One of nine Lopers to qualify for the national championships, he competes 5 p.m. Friday in the 800 prelims, with the finals scheduled for 2:45 p.m. Saturday.

Currently, Ferguson has the third-best time in Division II, a school-record 1:47.8 he posted last month. He won his third MIAA title with a time of 1:52.17.

“I’d say I feel just as confident (as the indoor season). The competition is a lot deeper and stronger this outdoor season, but I’m going into it with the same mindset,” he said. “If it’s a tactical race, I like my chances a lot, and that’s usually the case in a championship setting.”

One thing’s for sure, whether he’s running or golfing, he’s going to give 100%.

“I’m a really, really competitive person. When it comes down to it, I just hate losing,” Ferguson said. “I don’t like the feeling that I left something out there.” 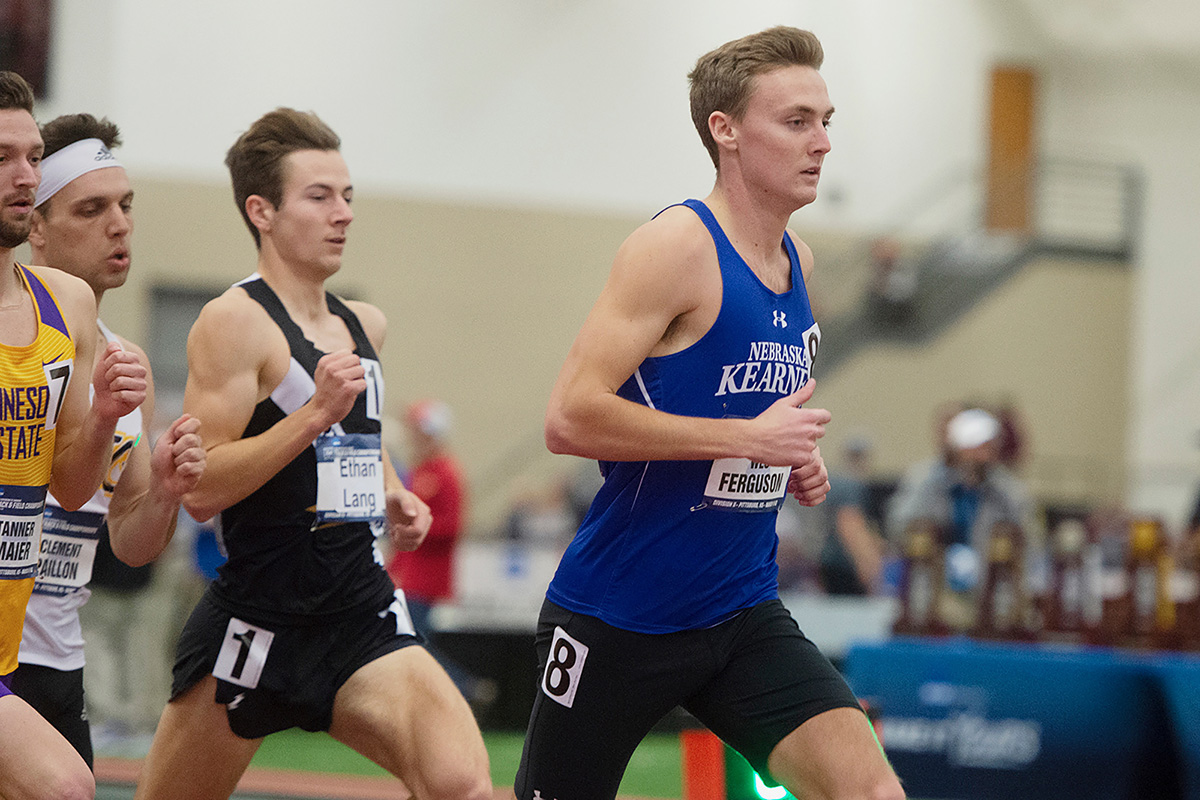