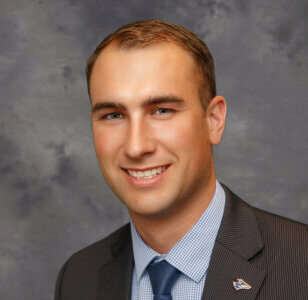 LINCOLN – Michael Christen, director of business services at the University of Nebraska at Kearney, has been selected to participate in Leadership Nebraska Class XIV.

Christen, who also serves as executive director of University Village Development Corporation of Kearney, began his career at UNK as assistant director of business services in 2016. In 2018, he was promoted to his current role, which oversees insurance, risk management, dining, bookstore, spirit shop, vending, banking and concessions operations.

In relation to the University Village development, he manages the recruitment of investors/developers, provides strategic direction and oversees the daily policies, operation and success of the site and its tenants.

Christen received the University of Nebraska KUDOS award in 2021, the highest award given to a university staff member.

He earned his Bachelor of Science in mathematics with a finance minor from UNK, graduated with honors and was an Honors Program graduate. He received his Master of Business Administration with a supply chain/marketing emphasis from the University of Kansas and graduated with honors.

Christen also serves as an area representative on the Diocese of Grand Island Bishop’s Pastoral Council and leads and directs the “Called” Faith Program for junior and senior high boys. He has served as a religious education teacher, retreat director and faith formation committee member for the Diocese of Grand Island. He participated in Leadership Kearney and mentored for the TeamMates Mentoring Program of Kearney.

Originally from Anselmo, he grew up working on the family ranch with his three siblings and extended family.

A Nebraska Chamber Foundation program, Leadership Nebraska was founded in 2006 to identify current and emerging leaders across the state, enhance their leadership skills and deepen their knowledge of the challenges and opportunities facing Nebraska. Participants are from different regions of the state and possess varied backgrounds and diverse talents. All candidates have demonstrated an abiding interest in Nebraska and its future.

Leadership Nebraska is a nine-month program that covers a range of key Nebraska issues, including economic and workforce development, agriculture and environment, health care, education, government and policy development.