Then he wants them to try again and learn from their mistakes.

Why? Because that’s what technical salespeople experience in the real world.

A 2015 graduate of the program, Cahis sets up challenging, hands-on projects in his industrial distribution classes to teach students how to think critically and troubleshoot problems. Specifically, he designed an upper-level mechanical power class that includes a motorized bike build.

First, Cahis goes over the basic concepts and different components of a power transmission system. Then, he splits the class into teams to assemble and race their bikes. The final step requires students to give sales presentations on their creations.

In late April, the students were given used, deconstructed bicycles and motor kits. Cahis instructed the class to assemble the two-stroke engines by watching a YouTube video.

Every time a class uses the motor kits, something breaks, goes missing or stops working, he said, making the project more challenging each year.

Haleigh Hoefs, a junior from Lincoln, described the building process as frustrating.

Cahis gave her team a new bike and they started over. They had it running before his safety check, when Cahis ensures the motor and exhaust are firmly secured to the frame and the chains are tight.

However, Hoefs’ team faced another challenge during this phase – the back chain came off and they couldn’t get it reattached before the race.

“The moral of the story is either test your bike in advance, so if something goes wrong you have time to fix it, or don’t turn it on until you need to use it,” she said with a laugh.

Three of the six teams passed their inspections and moved on to the race portion of the project. Two sped across the finish line in a west campus parking lot, while the third team’s engine died shortly after the race started.

Jack Sutton, a junior from Wahoo, claimed the first-place trophy – a sprocket spray-painted gold – for his team. He humbly attributed his success to simply following the “super easy” instructions.

“All you had to do is watch the video and pay attention,” he said.

Sutton also was a creative problem-solver. He added tensioners to tighten the chains, an idea he didn’t get from the video. Other teams followed suit.

Whether a team raced or not, they were still required to give a sales pitch.

“As salespeople, they are going to have to answer difficult questions,” Cahis said. “They need to learn how to confront those situations and battle objections, explain why it failed and, more importantly, try to convince me to still consider them as an option.”

These concepts apply to any industrial distribution field – agriculture, chemical and pharmaceutical, electrical, instruments, mechanical equipment and supplies or medical.

For example, Cahis said employees working at a grain elevator will encounter conveyer belts with large motors, converters and gear boxes that will eventually break down. Other graduates might sell construction equipment with hydraulic systems. If there’s an issue, they can use the knowledge they gained at UNK to help the customer fix the problem.

“It gives them that credibility because it’s all about establishing that relationship,” Cahis said. “If they’re seen as someone who actually knows their stuff, that’s really going to help them.”

At first, Hoefs didn’t see value in the motorized bike project, but now she does.

“I thought it was just a glorified puzzle, but it’s a lot more complicated than that,” she said. “Normally, you don’t get a puzzle where one of the side pieces is broken off and you have to reattach it and know where it goes.”

As an intern at Applied Industrial Technologies this past year, Hoefs has seen salespeople find solutions for their customers – something she will soon be doing as a professional in the field. 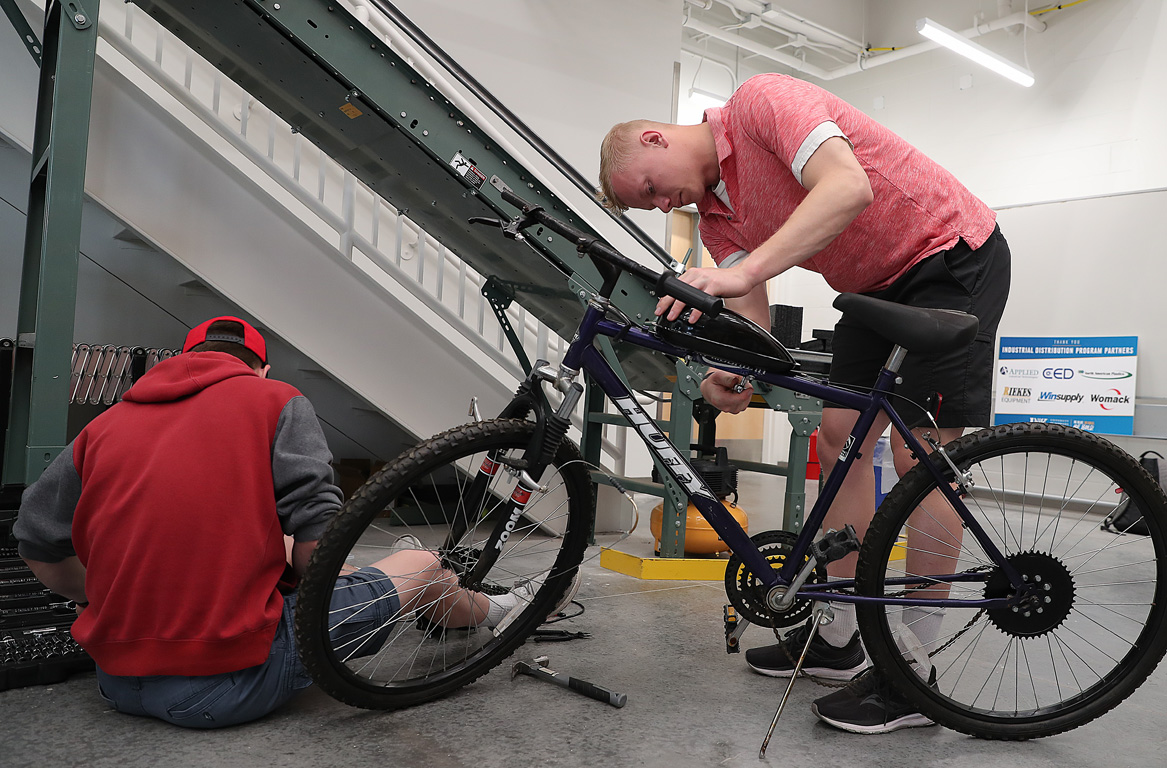