KEARNEY – Carlee Liesch and Abbie Vodicka were 13 years old when they first met.

Fittingly, their friendship started on a softball field.

Liesch was practicing with her club team at Pine Lake Park in Lincoln when Vodicka stopped by to watch. They became teammates the following summer, and they’ve been nearly inseparable since.

Vodicka calls Liesch a “free spirit” with a bubbly personality and great sense of humor. “She’s just super fun to be around. She has good energy.”

Liesch says Vodicka knows how to have fun, too, but she also brings some much-needed organization to the friendship. “Abbie kind of balances me out.”

The University of Nebraska at Kearney seniors have been playing softball together since 2014. They were members of the same club team through the Driven Academy and they both attended Lincoln Pius X High School, where they helped the Thunderbolts reach consecutive state tournaments in 2016 and 2017.

Liesch was a First Team All-State selection in 2017, when Pius X finished third in Class A, and Vodicka was an All-State Honorable Mention.

When the time came to select a college, Liesch already knew where she was heading. That decision was made during her second UNK softball camp.

“UNK just felt homey. It just felt comfy and it felt like I could be here for four years and be really happy,” Liesch added.

Now, she just needed to get her best friend on board. “I was like, ‘Abbie, I’m gonna go to UNK. You have to come with me.’”

Liesch committed to the Lopers in November 2017. Vodicka made her announcement the following day.

“She was definitely the biggest influence on my decision to come here,” Vodicka said.

Just like high school, the two have done pretty much everything together in college. They’ve been roommates all four years, first in an on-campus residence hall, then in an off-campus house that gives Liesch a little more room to “store” her stuff.

“Neither of us is a super clean freak, but she’s a little bit messier than me,” Vodicka said with a laugh.

That’s the part of the friendship they enjoy the most. When they’re together, they’re not afraid to be themselves.

“I feel like when you’re with your best friend you can kind of goof around and not be worried about what other people think, because we’re both weird and goofy,” Liesch said. “That’s helped me make a lot more friends and be more outgoing.”

On the softball field, this familiarity – knowing somebody always has your back – creates an added level of confidence and comfort.

Liesch and Vodicka have played in a combined 296 games for the Lopers, with 288 starts. They’ve both been starters since freshman year.

Liesch burst onto the scene in 2019, when she was named Mid-America Intercollegiate Athletics Association (MIAA) Freshman of the Year and was selected to the All-MIAA First Team and NCAA Division II All-Central Region Second Team. Her .458 batting average that season is second-best in school history and her 71 hits are the fourth-most all-time. She also scored 50 runs, tying the fifth-best single-season total.

The speedy outfielder was a perfect 18 for 18 on stolen base attempts in 2020, becoming just the fourth Loper to swipe at least 15 bags in a season without being caught. Former All-American Darcie Berry accomplished the feat twice (1998-99). Liesch currently ranks ninth in school history with 46 steals and fifth in stolen base percentage (.902).

All told, her .409 career batting average would be the best in UNK history, topping the .401 average three-time All-American Jill McCaslin posted from 1994-97. Liesch is also tied for third all-time with 14 career triples and her 213 career hits are fourth-best in school history, trailing leader and two-time NAIA All-American Kathy Nelson (1981-84) by 26. She needs just three more runs to crack the all-time top 10.

These accomplishments are even more remarkable considering the final 20 games of the 2020 regular season and the MIAA Tournament were canceled because of the COVID-19 pandemic.

Vodicka has 129 hits, 84 runs scored and 56 RBIs in her UNK career. Her best season came in 2021, when the everyday infielder started all 42 contests, put together an 18-game hitting streak and earned All-MIAA Honorable Mention recognition. She led the Lopers with 53 hits and 16 doubles – tied for the fifth-best single-season mark in school history – and trailed only Liesch with a .356 batting average.

COMING TO A CLOSE

The Lopers are 23-21 overall this season and 13-9 in the MIAA, putting them in fourth place in the conference standings. Just four games remain before the MIAA Tournament, which starts Wednesday in Edmond, Oklahoma.

Vodicka knows the end of her UNK career will be bittersweet.

An MIAA Scholar-Athlete and two-time MIAA Academic Honor Roll performer, Vodicka graduates next month with a bachelor’s degree in communication disorders. She plans to pursue a master’s degree in speech-language pathology at the University of Nebraska-Lincoln.

Although they’re about to go their separate ways for the first time in eight years, the two softball players who met on that field in Lincoln know this definitely isn’t goodbye.

“It’s going to be a lifelong friendship,” Vodicka said.

Extremely thankful for these 4 SENIORS and their families for everything they have done for UNK Softball! 💙💙💙 pic.twitter.com/KJAdVZuUHP 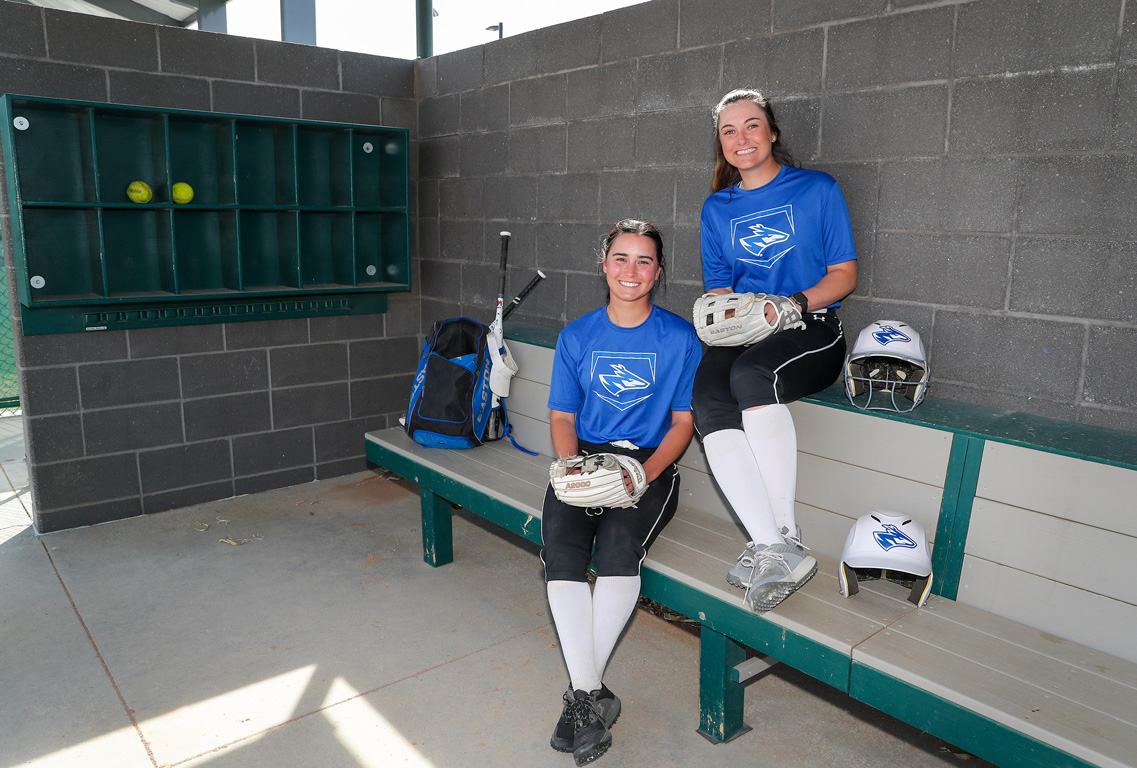