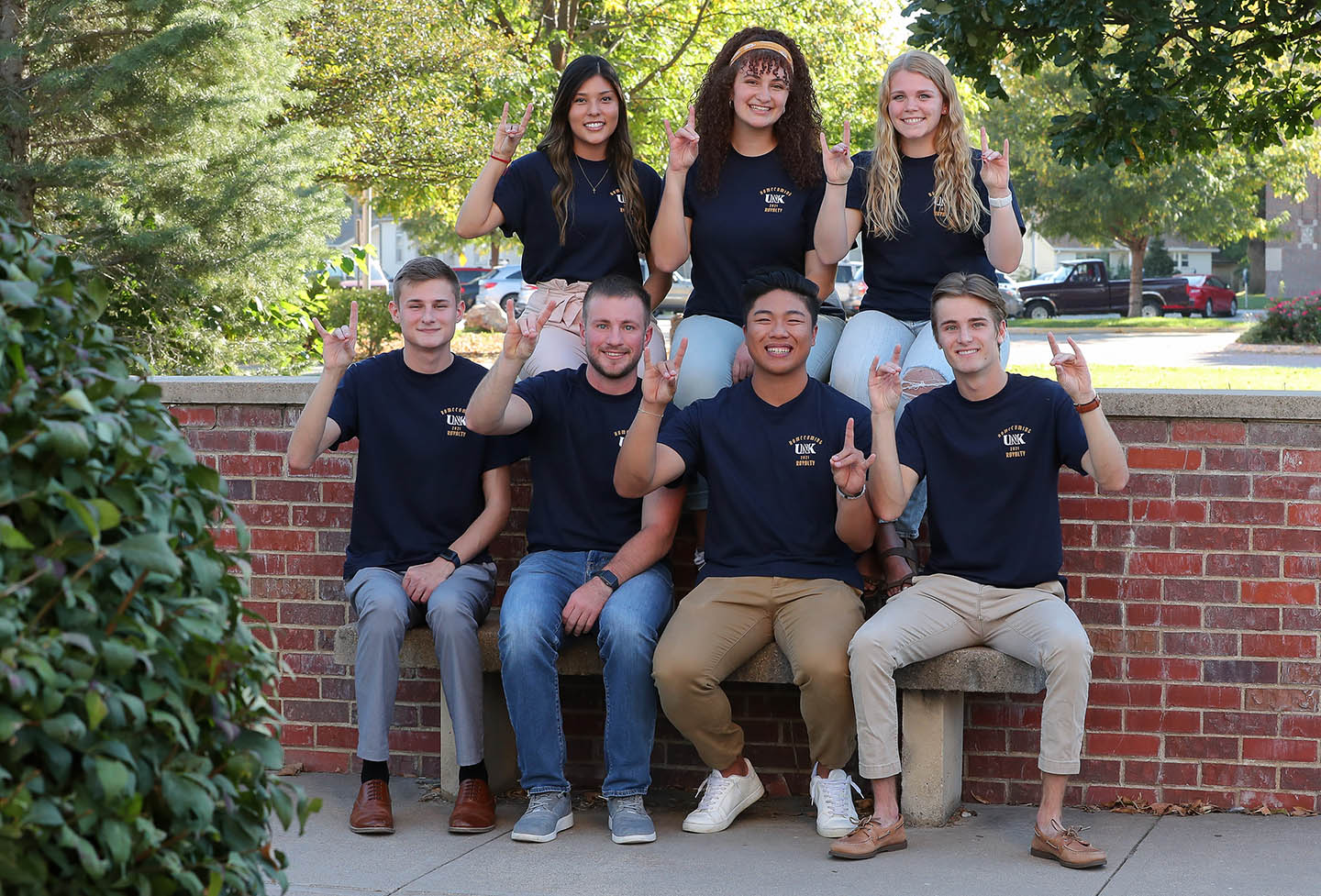 KEARNEY – Eight finalists for homecoming royalty were announced today during a pep rally on the University of Nebraska at Kearney campus.

UNK’s homecoming king and queen will be crowned Thursday night following the lip-sync competition, which begins at 7 p.m. in the Health and Sports Center. They will also be recognized during the homecoming parade scheduled for 10 a.m. Saturday in downtown Kearney and the home football game set for 2 p.m. Saturday at Cope Stadium.

Homecoming royalty are selected by two rounds of student voting, with the final round occurring this week.

Grace Koubek, Gamma Phi Beta
Koubek is a senior majoring in exercise science with a minor in athletic training/coaching. A member of Gamma Phi Beta, she served as the sorority’s Girls on the Run chairwoman and assists with various community service opportunities. Koubek is also part of the Leukemia and Lymphoma Society, serving as a resource for other young adults and teenagers and supporting them during their battle with cancer. Her interests include hunting, fishing, coaching, traveling and staying as active as possible. She has been on the dean’s list many of her college semesters.

Jazmin Matias-Trejo, Mantor Hall
Matias-Trejo is a senior majoring in family science with a minor in criminal justice. She is involved in the Thompson Scholars Learning Community, UNK Dreamers, Nebraska Cultural Unity Conference and Alpha Phi Sigma, Mortar Board and Order of Omega honor societies. She’s also a member of the Alpha Omicron Pi sorority, serving as director of diversity, equity and inclusion, and a resident assistant for Mantor Hall. Matias-Trejo was a New Student Enrollment leader the past two summers.

Holly Rockenbach, Alpha Omicron Pi
Rockenbach is a senior majoring in communication disorders with a special education minor. She has held various leadership positions within the Alpha Omicron Pi sorority and is the current president of the Kearney Student Speech Language Hearing Association. Rockenbach served as a New Student Enrollment leader the past two summers and as a resident assistant for Mantor/Randall halls the last three years. She is a member of the UNK Honors Program, Loper Programming and Activities Council, Catholic Newman Center and Mortar Board and Order of Omega honor societies. She’s also a researcher in the Undergraduate Research Fellows program and an employee at the Plambeck Early Childhood Education Center. Rockenbach has given campus tours and she volunteers with many organizations, including Special Musicians and TOPSoccer. She plans to pursue a master’s degree in speech-language pathology.

Nate Grimm, Pi Kappa Alpha
Grimm is a senior majoring in psychology with a minor in coaching. A member of Pi Kappa Alpha, he serves as the fraternity’s philanthropy chair and previously served as president. He’s vice president of community service and philanthropy for the Interfraternity Council and president of Greeks Advocating for Healthy Lifestyles. Grimm is involved in the UNK Honors Program, Undergraduate Research Fellows, Psychology Club, Chancellor’s Ambassadors and Mortar Board, Order of Omega and Psi Chi honor societies. He works as a tutor and welcome desk assistant in the Learning Commons and as the human subjects coordinator for the UNK Psychology Department. Off campus, Grimm worked as a site coordinator at Carol Joy Holling Camp last summer and he volunteers with the TOPSoccer program. Grimm previously volunteered as a coach with Kearney High School and Gibbon Public Schools track and field. He plans to attend graduate school to study sports psychology.

DJ Hardwick, Office of Undergraduate Admissions/New Student Enrollment
Hardwick is a senior general studies major. He’s the student coordinator in UNK’s Office of Student and Family Transitions, as well as chief justice for Student Court, a student ambassador for the College of Business and Technology, student representative for the First-Generation Leadership Board and resident assistant in Randall Hall. Hardwick was a New Student Enrollment leader last summer and he was recognized as the Student Employee Rookie of the Year. He plans to pursue a master’s degree in higher education student affairs at UNK.

Kobe Lo, Pi Kappa Alpha
Lo is a senior majoring in exercise science. He’s currently enrolled in the master’s program for athletic training, working with the UNK football team. Lo has served as the health and safety and recruitment chair for the Pi Kappa Alpha fraternity and as a mentor for Kearney Bound Scholars. He’s also been involved in the Exercise Science Club, Men’s Project and Order of Omega honor society. He works with high school athletes back home during the summer weight room program.

Landon Seibert, Sigma Phi Epsilon
Seibert is a junior majoring in industrial distribution. He is involved in UNK Student Government and currently serves as speaker of the senate and vice president of recruitment for both the Sigma Phi Epsilon fraternity and Industrial Distribution Organization. He also serves as a Chancellor’s Ambassador and student ambassador for the UNK Alumni Association and College of Business and Technology. In the winter, he helps coach youth hockey for the Tri-City Junior Storm.