KEARNEY – Claudia Taylor is a “very shy” person, but you wouldn’t know that from meeting her.

The Lincoln High School graduate found her voice at the University of Nebraska at Kearney, where she’s active in the Office of Student Diversity and Inclusion (ODI) and TRIO Student Support Services.

“My passion for social justice and fighting for basic humanity overshadows my shyness and my uncomfortableness,” said Taylor, an Afro Latina who embraces her multiracial background.

“Being at a predominantly white college allows me to amplify and uplift other voices, and I can do that through ODI organizations,” she said. 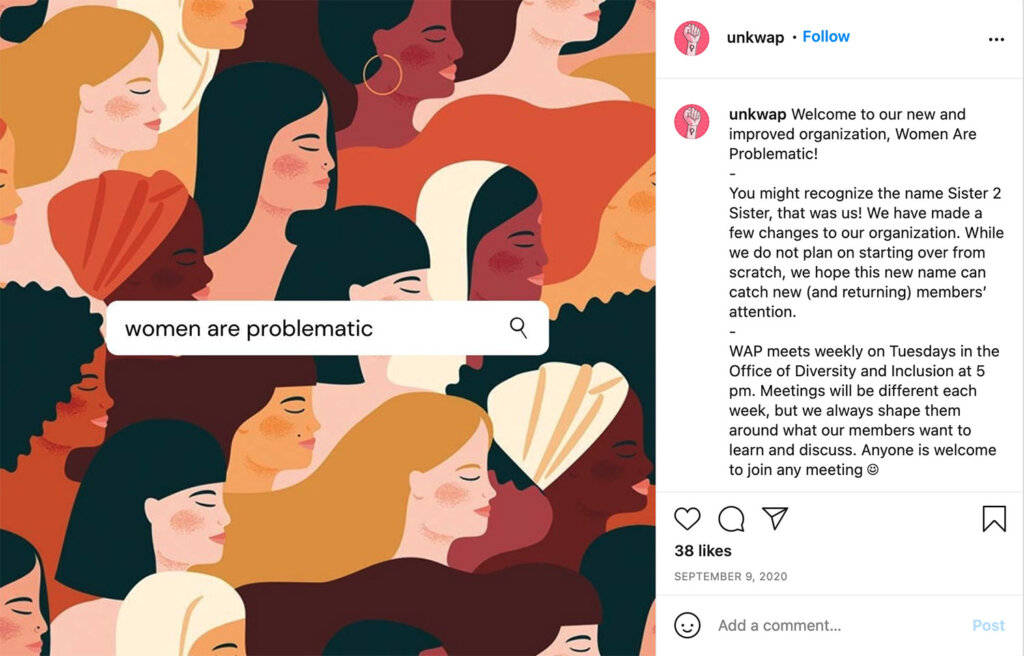 Taylor got involved with the Office of Student Diversity and Inclusion as soon as she arrived at UNK. She’s a member of the Black Student Association and president of Women Are Problematic, an organization that focuses on women’s rights and female empowerment.

Formerly known as Sister 2 Sister, Taylor revived and rebranded the group – choosing the Women Are Problematic name to gain attention. The student organization had fewer than 10 members when she took over as president, and more than 30 people attended the most recent meeting.

“I want to inform and educate people,” said Taylor, who describes the meetings as a place for people to interact, ask questions and “be curious.”

“I really want people to feel like it’s a safe space for them to talk about issues.”

The group, open to all students, discussed body image and eating disorders at their last meeting. They’ve also addressed topics such as reproductive rights and sexual education.

Prior to COVID-19, members were involved with service projects through Community Action Partnership of Mid-Nebraska and the S.A.F.E. Center, a Kearney-based nonprofit that provides free and confidential services for people impacted by dating and domestic violence, human trafficking, sexual assault and stalking.

Taylor currently serves as historian of the Black Student Association, but she plans to pursue a higher position within that organization, which allows her to connect with other Black students on campus, discuss her experiences and educate others about Black culture and issues.

“As a Black person, I need a space where I can say all that I need to say,” she said.

Luis Olivas, assistant director of the Office of Student Diversity and Inclusion, called Taylor “one of the hardest-working students at UNK” while noting her far-reaching impact on campus.

“Claudia strives to make UNK a more welcoming and equitable place for all students through her involvement in Women Are Problematic and the Black Student Association,” Olivas said. “She does not pursue change for change’s sake, but to validate the separate lived experiences of students who are often underserved and underrepresented.”

Taylor’s efforts are recognized by the Office of Student Diversity and Inclusion, which awarded her the ODI Leadership Scholarship.

“She not only devotes her time to worthwhile organizations, but also is a great student in the classroom,” Olivas added. “On top of that, she is a great person. Very few people have that trifecta – great person, academically sound and socially aware. Claudia does, and she is the kind of leader we should all strive to be.”

The UNK junior is also involved with TRIO Student Support Services, a federally funded program that assists first-generation and income-qualified students and those with documented disabilities during their pursuit of a college degree by providing academic and personal support, financial guidance and career development opportunities. In addition to benefiting from the program, Taylor supports other students by serving as a mentor.

TRIO senior adviser Bambi Sell described the first-generation college student as a “natural leader” who has the skills and passion to make a difference.

“Claudia is a kind and genuine person. She is selfless and always puts others before herself,” Sell said. “Her sense of humor, or as she would say, ‘her quirkiness,’ is one thing that I admire about her. She has the ability to bring light into any situation and it radiates onto others.”

A dean’s list student and Phi Eta Sigma honor society member, Taylor is majoring in international studies with a Spanish minor. Her bilingualism was utilized in a recent project that benefits non-English speakers in central Nebraska.

Taylor is part of the UNK team that brought MyLink to Adams, Buffalo, Dawson and Hall counties. The free smartphone app connects people with a variety of community resources and services offered by nonprofit organizations and government agencies. Taylor and fellow UNK student Gracie Lopez of Hastings were hired to gather and input information and complete some of the translations for the app, which is available in Arabic, English, Spanish, Somali and Vietnamese.

After completing her education, Taylor wants to work for a human rights organization or government agency where she can advocate for neglected populations and make a global impact.