KEARNEY – Why do you want to be a law enforcement officer?

It’s a question Kenzie Hubl’s been asked countless times over the past two months.

Her answer never changes, even as a wave of anti-police sentiment spreads across the country.

“For as long as I can remember, I’ve always wanted a career in law enforcement,” the 21-year-old Blue Hill native says.

Hubl, a criminal justice major at the University of Nebraska at Kearney, considers it a calling.

“To me, a career in law enforcement is a future in the service of others,” she said. “It’s a commitment to justice and serving the greater good. I want the opportunity to make a meaningful impact on the people around me.”

Regardless of the rhetoric, Hubl’s opinion of law enforcement and her future career hasn’t wavered.

“I know it can be a stressful and potentially dangerous job, but it’s so incredibly rewarding because you get to touch so many lives,” she said.

The UNK senior is witnessing that firsthand through her internship with the Nebraska State Patrol.

Her interest in the agency dates back to high school, when she attended the Junior Law Cadet Program sponsored by the Nebraska American Legion. Hubl and other students selected for the program spent a week at the Nebraska Law Enforcement Training Center in Grand Island, where they explored various aspects of law enforcement and received training in firearms, self-defense, fingerprinting, K-9 handling, investigations and other areas.

As a summer intern with the Nebraska State Patrol Troop C, headquartered in Grand Island, Hubl has the opportunity to expand that training while experiencing the day-to-day aspects of the job through ride-alongs.

“I absolutely love it,” she said. “It’s really neat to see each officer in their own element. All the people I’ve met have been very positive, and they love what they do.”

That’s the other side of the national debate.

Although instances of police brutality gain the most attention, they don’t paint an accurate picture of the vast majority of law enforcement personnel, according to Hubl.

“Even though we see all of this negative stuff about law enforcement, we’re still going to be there for everyone,” she said.

The @NSP_TroopC interns stopped by our Lincoln office today for a tour. Of course, had to show them one of our favorite patrol cars. Love the 93 #Mustang! pic.twitter.com/1IZ1RKsvOY

She decided to pursue a career in law enforcement during her senior year at Kearney High School.

“Even back then there were people who didn’t have the most positive view of law enforcement,” Lindner said.

The 22-year-old hopes to change that perception.

“I want to show people that officers are good, and they want to help people,” she said. “We want to help people in the community on those tough days, because oftentimes when we’re seeing people it’s not on their best day. It’s usually on their worst day.”

Lindner interned with Kearney Police Department while earning her bachelor’s degree in criminal justice from UNK, where she competed on the track and cross country teams. That experience led to a full-time job offer, which she accepted before graduating in May 2019.

“That internship definitely helped me a lot,” she said. “It got me involved with Kearney Police Department and it really helped during the hiring process for them to know who I was.”

One of the selling points for Lindner was Kearney Police Department’s positive relationship with the community.

“The community support, especially now, is major,” she said. “And it’s awesome how much support we get from the people in Kearney.”

In return, Lindner said, “We’re doing our best to do what’s best for our community.”

Hubl, who graduates from UNK in December, plans to pursue a career with the State Patrol in the future.

Now, more than ever, she sees the need to use her passion and knowledge to make a difference in the world.

“This internship has really helped me decide for sure,” Hubl said. 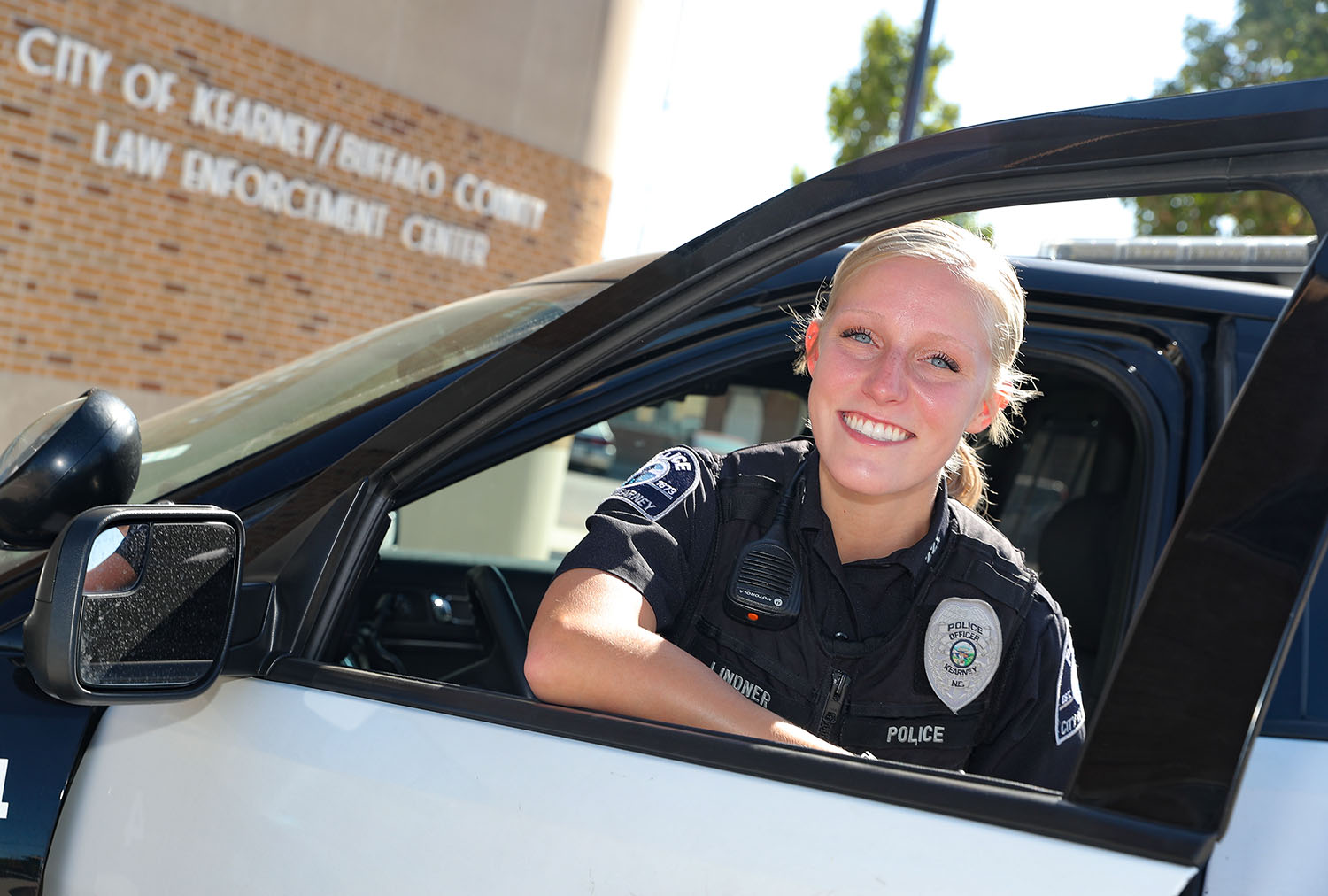