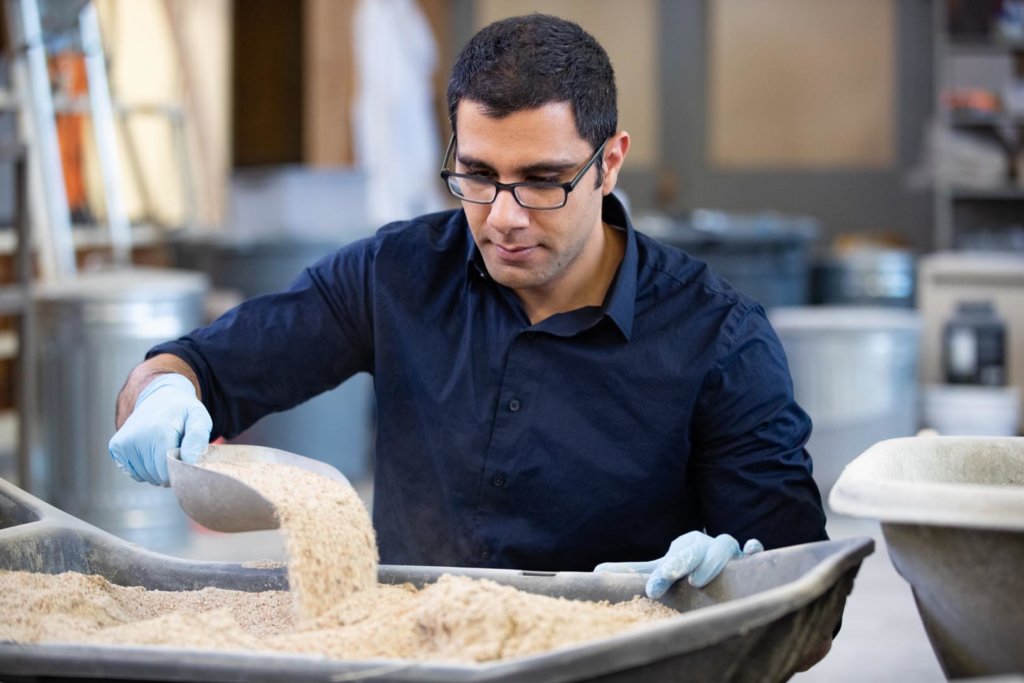 Concrete is the foundation of the future. It’s the most widely used manmade material, with an estimated 10 billion tons produced worldwide each year – a figure that’s expected to continue growing as developing nations urbanize and countries such as the United States look to replace aging infrastructure.

“Most of the infrastructure in the U.S. is made of concrete. Most of the roads, bridges and buildings, they’re made of concrete,” said Mahmoud Shakouri, an assistant professor of construction management at the University of Nebraska at Kearney.

Many of these structures were built several decades ago and are beginning to show their wear.

“When you look at them now, they have a lot of problems,” Shakouri said.

It’s an issue U.S. President Donald Trump targeted immediately after his election in 2016, when he announced a plan that directs $200 billion in federal funding toward projects that repair or replace aging roads, bridges and other infrastructure. The goal was to spur at least $1.5 trillion in infrastructure investments after local, state, tribal and private contributions.

However, Shakouri believes the problem extends beyond financial commitments.

“The concrete we have now compared to 50, 60 years ago is not the same,” he said. “We’ve made a lot of progress in automating the process, but I feel like the quality of the concrete is not as good as what we had before.”

Shakouri points to the Roman Empire as an example of this decline. While many of those structures – the Pantheon, Colosseum and others – are still standing nearly 2,000 years later, roads built today begin to crack and deteriorate within a year or two.

This is especially noticeable in cold-weather states such as Nebraska, where one of the primary causes of deterioration in concrete bridges and roads is the use of salt, deicers and anti-icing chemicals during snow and ice removal. When these chloride-based chemicals seep into concrete, they corrode the reinforcing steel inside, weakening the structure and shortening its life span.

Another concrete-related concern is its environmental impact.

Production of Portland cement – the most common type used in concrete – generates approximately 7% of greenhouse gas emissions worldwide. For every ton of cement produced, a nearly equal amount of carbon dioxide, a greenhouse gas linked to global warming, is released into the atmosphere.

“It’s a big topic of research from an environmental perspective,” Shakouri said. These issues must be resolved to improve concrete production, according to the UNK researcher, who believes Nebraska’s most common crop could be part of the solution. 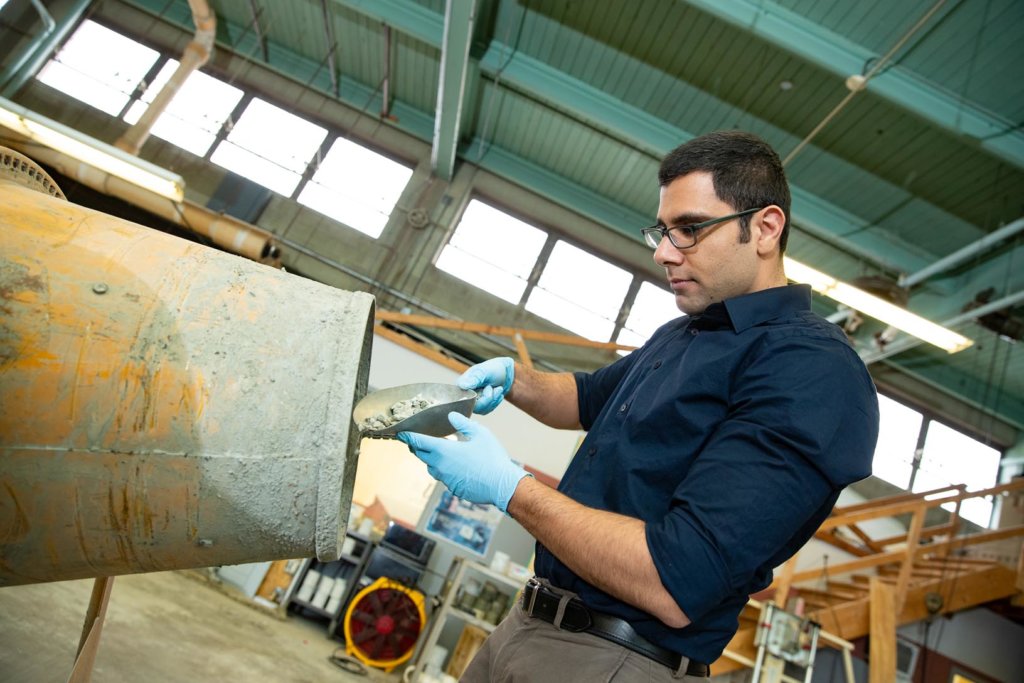 After studying architectural engineering and construction management at Azad University of Tehran and Universiti Teknologi Malaysia, Shakouri came to the U.S. in 2012 to attend Louisiana State University.

Shakouri was interested in construction but hadn’t yet narrowed his scope to concrete. He graduated from LSU with a master’s degree in industrial engineering, then enrolled in a Ph.D. program at Oregon State University, where he found a professor researching concrete.

“There are a lot of opportunities to do research in this field,” said Shakouri, whose dissertation looked at how chlorides impact the service life of concrete structures.

One of those opportunities focuses on supplementary materials that can replace a portion of the cement used in concrete, improving the product’s strength and durability, reducing production costs and lowering the environmental impact.

The most common supplementary materials added to cement are fly ash, blast furnace slag and, to a lesser extent, silica fume. However, fly ash – a byproduct from coal-fired power plants – is getting harder to come by as environmental regulations impact these power plants, many of which have been shut down or converted to use fuels other than coal.

The current supply of supplementary cementitious materials can only meet about 15% of the concrete demand worldwide, according to Shakouri.

Extensive research was already underway to identify alternative cementitious materials, including bioashes from rice husks and sugarcane mills, but very few people were looking at corn.

“When you look at the literature, maybe 90% of the researchers studying corn are from Nigeria,” Shakouri noted.

A native of Iran, Shakouri admits he knew “nothing” about the crop when he earned his doctorate in civil engineering from Oregon State.

“When I got the job at UNK, everyone in Oregon told me, ‘You’re just going to see corn for the rest of your life,’” he said. “I didn’t believe them. But when I came here, I saw corn everywhere.”

Shakouri, who joined UNK’s Department of Industrial Technology in August 2017, also saw the potential to use the commodity in a completely new way. 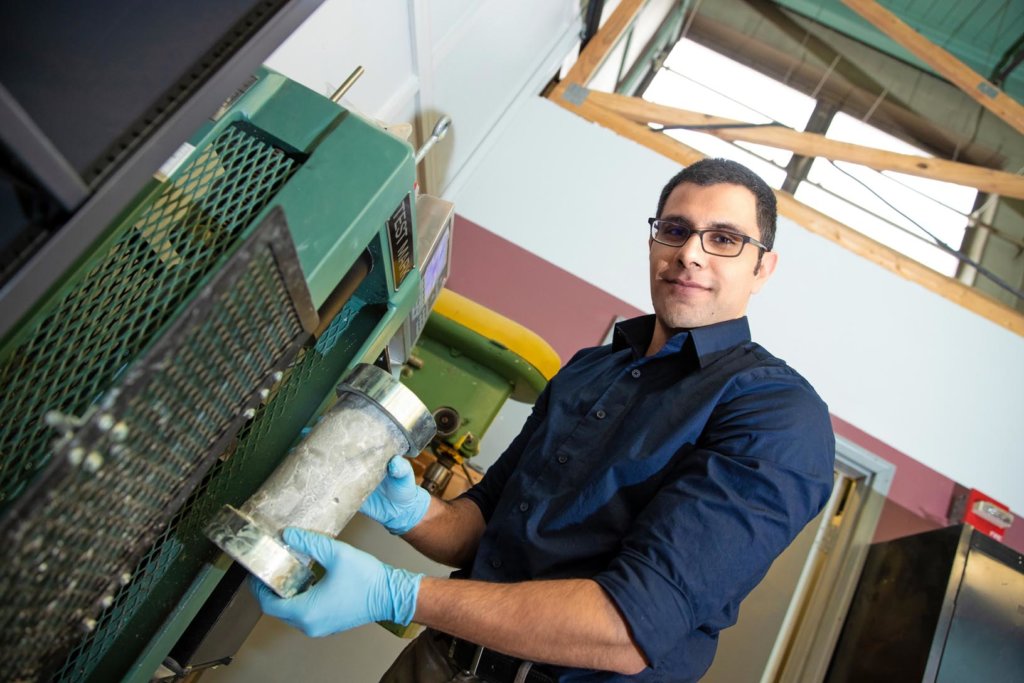 Corn is the most produced grain in the world, with more than 1 billion metric tons harvested each year.

The U.S. produces about one-third of that total, and Nebraska is among the top corn-producing states, with an estimated 1.8 billion bushels harvested in 2018.

About 252 million metric tons of corn stover – the cobs, stalks, leaves and husks left over after harvest – were produced in the U.S. that year. Corn stover is typically used as livestock feed or to make biofuels, but Shakouri believes it can be a sustainable source of supplementary cementitious material for the concrete industry.

In 2018, he launched a pair of research projects to support this theory.

One study, conducted by Shakouri and UNK chemistry professor Chris Exstrom in collaboration with Prannoy Suraneni, an assistant professor at the University of Miami, focused on whether corn stover ash can meet the industry standards to be used as a supplementary material in concrete.

The second research project, a collaboration between Shakouri and Exstrom, looked at whether corn stover ash can improve the durability of concrete and reduce its permeability.

In both projects, the UNK researchers tested three types of corn stover ash, which was produced in a high-temperature cyclonic furnace on campus. A compression testing machine was used to measure the strength of each concrete sample, and Shakouri received $205,000 from the Nebraska Research Initiative to purchase state-of-the-art equipment for material characterization and corrosion assessments.

The pretreated corn stover ash – mixed in cement at levels of 5% and 20% – improved the overall strength of the hardened concrete and made it three times more resistant to electrical currents. This means the concrete is less susceptible to chloride and other harmful compounds.

“That is very significant,” Shakouri said. “I think it’s a good selling point for this product.” 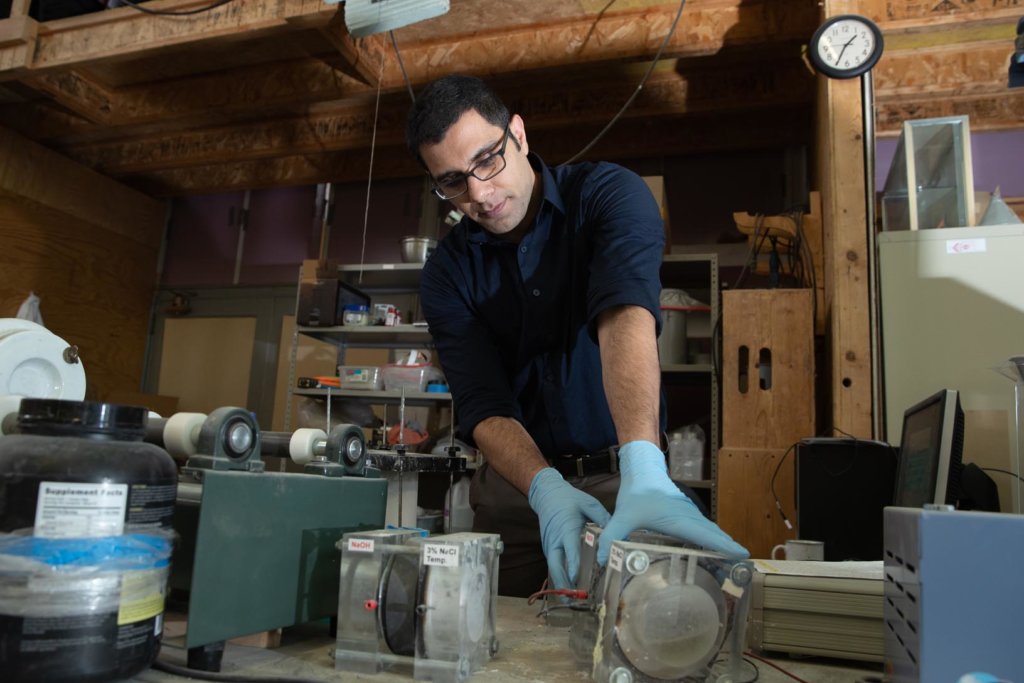 Unlike coal, which takes millions of years to form, corn is planted and harvested each year, making it a more sustainable option than fly ash. Corn stover also burns at about 400 to 500 degrees and requires no additional fuel, so the ash takes significantly less energy to produce compared to standard cement, a mix of limestone, clay and other materials burned at about 2,000 degrees.

By replacing a portion of the cement with corn stover ash, Shakouri believes the product’s environmental impact can be reduced.

He estimates half of the corn stover produced in the U.S. can offset 7% of the country’s cement production, reducing carbon dioxide emissions by 4.5 million metric tons annually. This leaves 50% of the corn stover for other uses, such as livestock feed and biofuels.

Adding plants to produce corn stover ash would create new jobs, boost the state economy and give farmers another revenue source, according to Shakouri.

“I think it’s a win-win situation,” he said. “There’s definitely an economic advantage.” 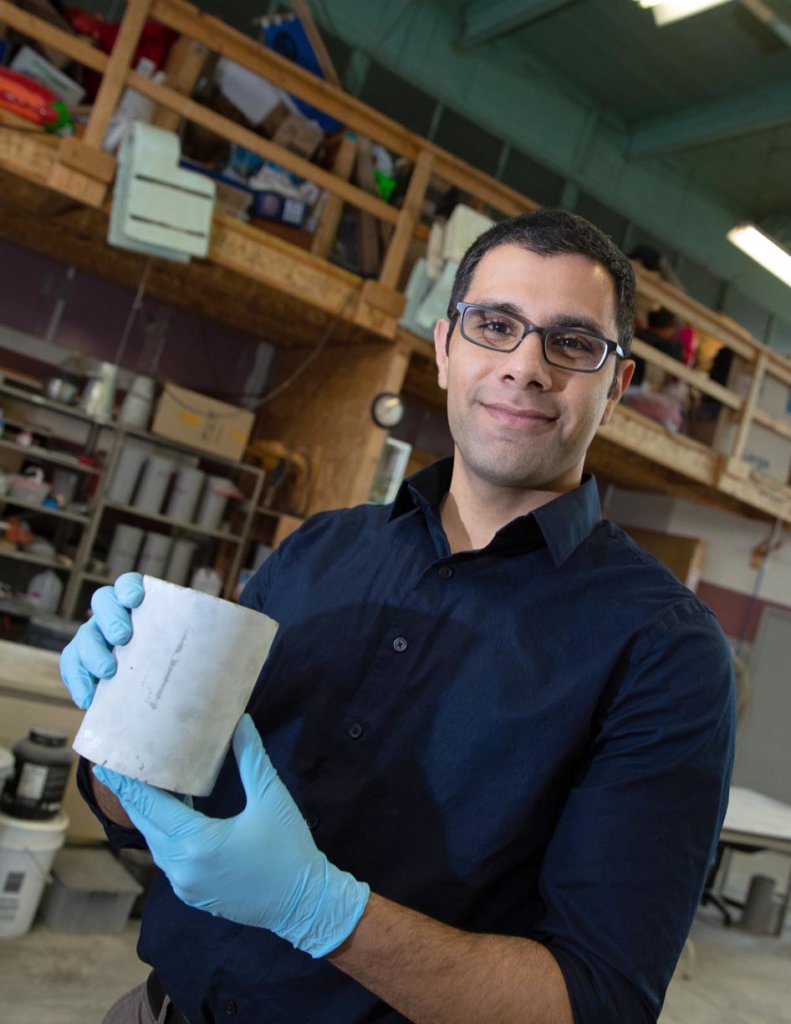 As far as commercial production costs, Shakouri said there are secondary products that would help outweigh the expenses.

“When you make corn stover ash, you’re not making a single product. You’re making several products,” he said, providing few details because the researchers are in the process of patenting these products.

On the construction side, Shakouri called his research results “very promising.”

Last fall, he shared his findings with officials at the Federal Highway Administration in Washington, D.C.

“They were very interested,” said Shakouri, who has already submitted two grant proposals through the National Cooperative Highway Research Program to expand his research and written three papers for publication. The previous projects were supported by a UNK Collaborative Research Grant and funding from Nebraska’s Established Program to Stimulate Competitive Research (EPSCoR), part of a National Science Foundation program aimed at strengthening STEM research.

Moving forward, Shakouri plans to look at whether different species of corn from Nebraska, Iowa and Illinois impact the quality of ash that can be used in cement.

“We’re still in the beginning stage,” Shakouri said, noting that a new type of cement must go through several years of research and testing before it’s approved.

“We still have a long way to go to make this material available for the public.”