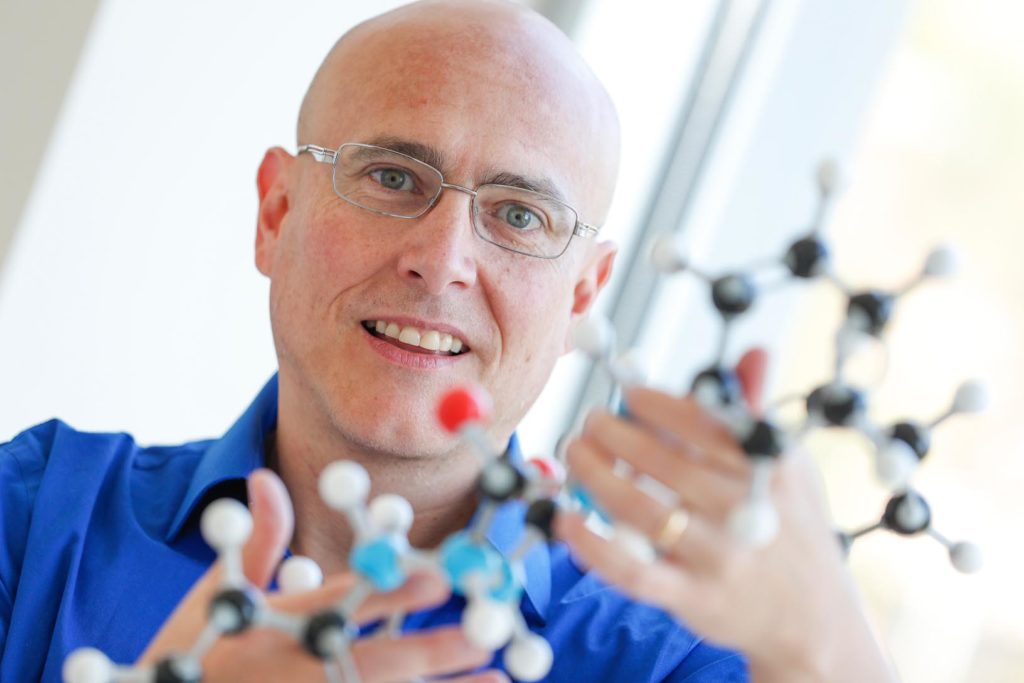 Diseases that attack the brain are particularly difficult, if not impossible, to treat.

Brain cancer has just a 34.7 percent five-year survival rate, and Alzheimer’s disease kills many it afflicts. Part of the reason why is that the brain has a defense mechanism, the “blood-brain barrier,” that protects it from harmful chemicals, bacteria and viruses. That barrier also keeps out substances that could kill cancer cells or sweep away plaques and tangles from an Alzheimer’s patient’s brain. Finding a way to penetrate that blood-brain barrier is a high priority for scientists.

Allen Thomas, an associate professor of chemistry at the University of Nebraska at Kearney, leads a team of undergraduate student scientists in his work to develop specific molecules that will cross the blood-brain barrier and perhaps serve as carriers for other chemicals that can treat brain diseases.

Thomas, in his fifth year on the UNK faculty, has a three-year, $400,000 grant from the National Institutes of Health to fund this work. He has spent his career in the field of medicinal chemistry because he enjoys making functional molecules.

Molecules, he explains, are atoms that have been joined together by reactions to create bonds. Hundreds of thousands of chemical reactions create varieties of bonds, he said. Thomas is particularly interested in using molecules to better understand a transporter protein called LAT1 (L-type amino acid transporter) that shows promise serving as a sort of drug mule, traversing the blood-brain barrier and potentially carrying specific chemicals that could kill cancer cells.

Transporters are important because brain capillaries, which carry blood, are separated from brain cells by a semipermeable membrane that is selective about what gets through. There is a very narrow range of molecules that can penetrate this membrane, which is why therapeutic drugs for various brain diseases are so difficult to develop. LAT1 is highly expressed in the blood-brain barrier, where it acts as a carrier for natural amino acids.

“The chemistry part,” Thomas said, “is determining how to attach transportable amino acids to drugs, and which drugs would be suitable for LAT1 transport. There are limitations based on the size of the transporter and how big the drug molecules can be in order to travel through it.” 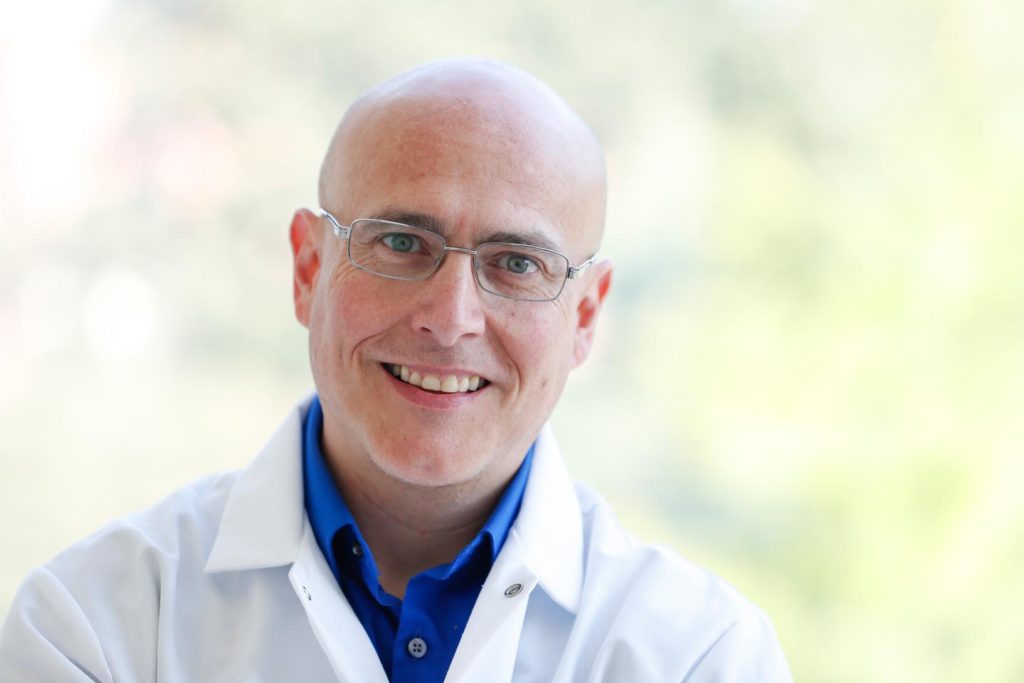 Thomas collaborates with a world-renowned scientist in transporter biology at the University of California San Francisco, Kathleen Giacomini, and a computational modeling expert, Avner Schlessinger, at the Icahn School of Medicine at Mt. Sinai Medical Center in New York. Giacomini tests all the compounds Thomas’ team creates. Schlessinger develops computer models that predict the potential for molecules to interact with the transporter. Computer programs can simulate what might be happening in cells, but, Thomas notes, simulations are a guide and not absolutely reliable.

“We have many examples of molecules transported by LAT1 that models cannot explain. They offer a possible answer and they allow you to generate a hypothesis of ‘there’s this space on an amino acid that might work for attaching a drug.’ Then we go in the lab and synthesize that amino acid-drug conjugate to see if it does work. The models are not based on human transporters but on bacterial structures, which are the best available to us right now. They aren’t perfect, and because proteins are not static, we need to test compounds in cells to be sure.”

When Thomas creates a compound, he sends it to Giacomini in San Francisco, where she has engineered cells to express high levels of LAT1; she checks whether the compounds are getting into cells via that particular method of transport and this gives a high degree of confidence in the mechanism, Thomas said.

“We know that our compounds are attracted to and are binding with the transporter, and she can tell if it actually is working because LAT1 is an ‘exchanger,’ meaning the amino acids inside and outside the cells exchange with each other. Her cells will release a radioactive amino acid marker if our compound gets in. It tells us if it’s being transported. It’s a state-of-the-art novel experiment.” 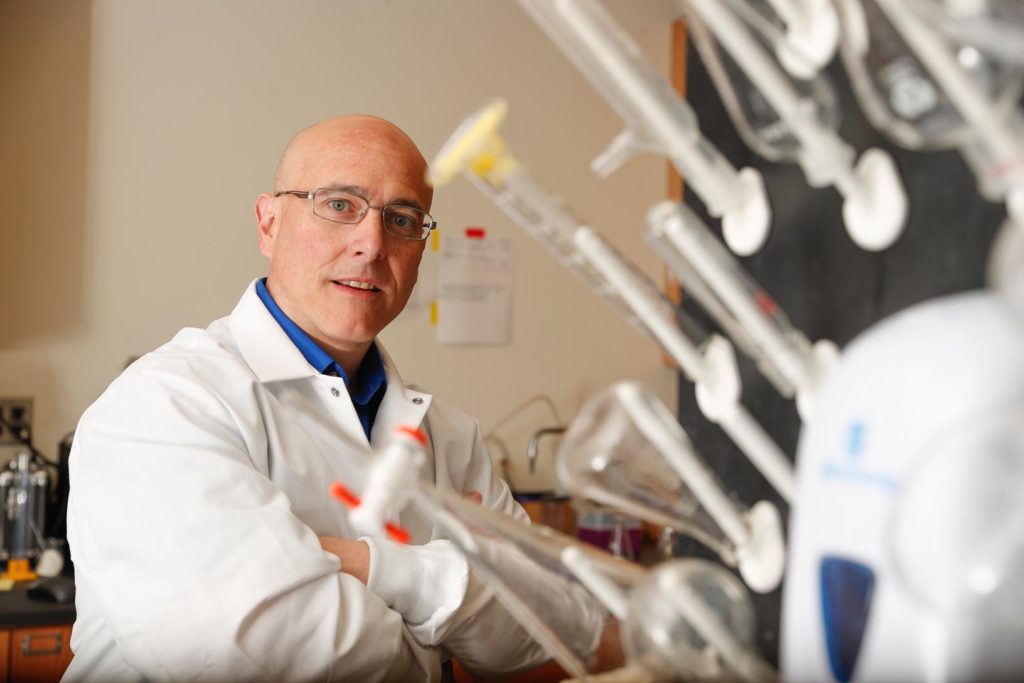 This research builds on work Thomas did prior to joining UNK. For 14 years after earning his doctorate from The Scripps Research Institute, he worked for a startup company in Boulder, Colorado, doing similar work looking for potential therapeutic compounds for Alzheimer’s treatments. While the “holy grail” would be to find compounds with commercialization potential, Thomas knows that’s a long shot, almost like winning the Powerball lottery. The failures are much more frequent than the hits, he notes.

Thomas joined the private sector after graduate school, lured by the salary and location. But there was always a sense of regret for leaving academe. While at the Boulder company, he found himself enjoying the teaching and mentoring of junior scientists and associates. He notes now that his doubts about his career path may have held him back, as he wasn’t really able to go all-in and fully commit to the industry. Eventually, he dipped his toes into teaching, accepting an adjunct position at the Community College of Denver. When the opportunity arose at UNK, he dove in.

At Boulder, part of his work focused on making molecules to treat Alzheimer’s disease. While working on that project, he began to learn about transporter proteins that could be used to deliver drugs to the brain. While industrial research works toward specific outcomes and applications, he said, academic research is more “basic,” looking to answer big questions about why and how things work.

Now in the second year of the three-year grant, Thomas said his team has made considerable progress in understanding what they can, and cannot, do.

“We really have learned a lot about the types of molecules that can be transported,” he said. “In the next two years, our focus will look more at the drug molecules, and connecting them to amino acids, for transport by LAT1, and to see if they have positive effects on killing cancer cells and are able to cross the blood-brain barrier in rodent models.”

The scientific challenges remain intriguing, as do the new opportunities provided by teaching. This “basic” research is ideal for students, he said. It gives them opportunities to learn lab skills while working on real problems, not just workbook experiments. And it helps undergraduates learn important critical-thinking, presentation and writing skills, along with intellectual growth and a chance to hone their career goals.

One of his former students started medical school at the University of Nebraska Medical Center in summer 2018; his original plan was to earn a Doctor of Medicine degree, but now he’s enrolled in a dual M.D./Ph.D. program with an eye toward medical research. This student scored in the top 99th percentile on his medical aptitude exam (MCAT). Thomas said the student changed his career plans toward research after working in his group for two years.

“I think we do a good job here,” he said. “We have a phenomenally high acceptance rate for professional and graduate schools. Within the last five years, UNK chemistry students have had an incredible 93 percent acceptance rate to medical schools.”

Thomas enjoys talking with students about science, helping them think critically about what they are doing, creating and testing hypotheses, and analyzing and interpreting the results.

“Research really does that for you; it helps you become a scientist and develop that habit of thinking,” he said.

Thomas took his entire nine-member undergraduate team to an American Chemical Society meeting in fall 2018 to present their findings.

“This ability to present your work to your peers is really an important component of educating students,” he said. 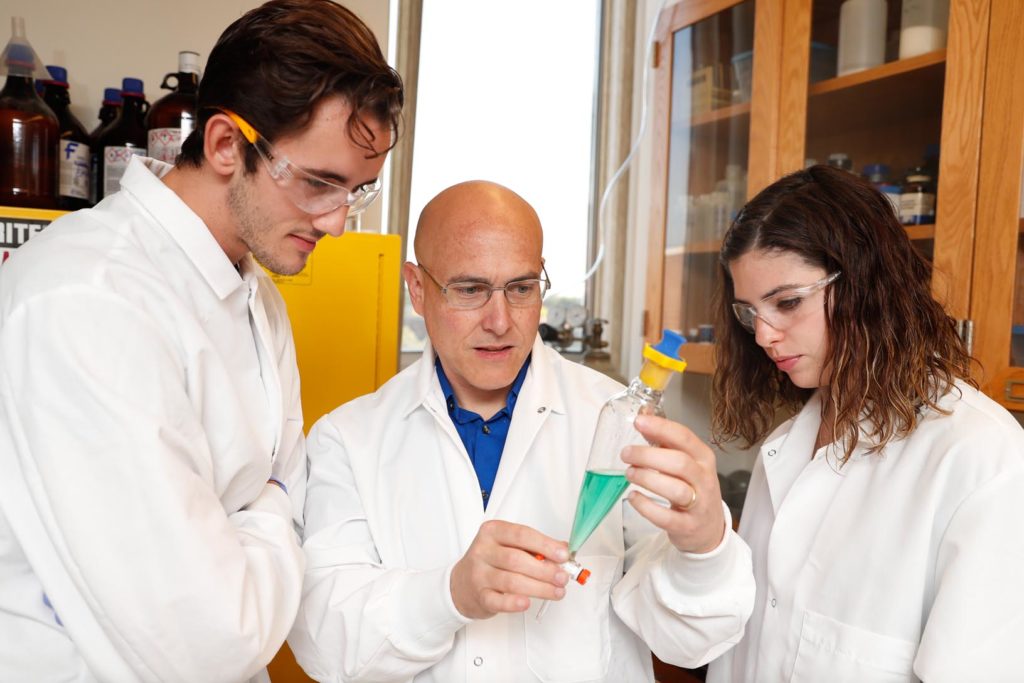 The jump to academe presented challenges for Thomas, who had to explore the psychology of teaching and how to communicate to a classroom of students for 50 minutes three times a week. Students come with a variety of backgrounds, he notes, from those who experienced advanced placement chemistry in high school to those whose experiences were not as rigorous.

“My job is to reach out to each student to help them succeed. I feel like I am a fairly serious person, which sometimes makes me seem less approachable to students. I need to find a balance between that tendency and not scaring them,” Thomas said. “My goal is that they take the science and the work seriously, but also for them to not dread taking my class. I want them to enjoy it as much as I do.”

UNK’s chemistry department is collegial and collaborative, according to Thomas.

“All of us believe in rigorous coursework and classroom and lab experience where students learn and demonstrate competency,” he said. “Research is important in chemistry; you cannot learn all of it just by reading textbooks or listening to lectures.”

Faculty in the chemistry department rotate through teaching different types of chemistry courses, depending on their expertise. This helps keep teaching fresh and provides everyone opportunities to mentor students at different grade levels. In any given semester, Thomas may be teaching a course in general chemistry, organic chemistry or seminar where students learn more about making presentations and being a scientist. Additionally, Thomas has mentored chemistry students conducting research for college credit, for which they write a research report and learn how to use specific and technical language.

Thomas also has taught a popular class called brewing science, which focuses on the science of brewing beer and spirits. Students learn about the molecules that give beer its color, flavor and body. And, of course, they learn about the effects of the molecule most associated with beer – ethanol (aka alcohol).

Thomas is happy he came to UNK. His lab has first-rate equipment and his students are, in his words, “brilliant and inspirational.” He finds his colleagues to be among the most enjoyable group of individuals he has worked with. He loves his five-minute commute to his campus office, especially when he remembers traffic in Boulder or his hometown near Dallas, Texas. That brings up what he does miss: authentic Texas barbecue.

But he has solved that problem by learning how to create his own Texas-style smoked brisket, using, of course, Nebraska beef. 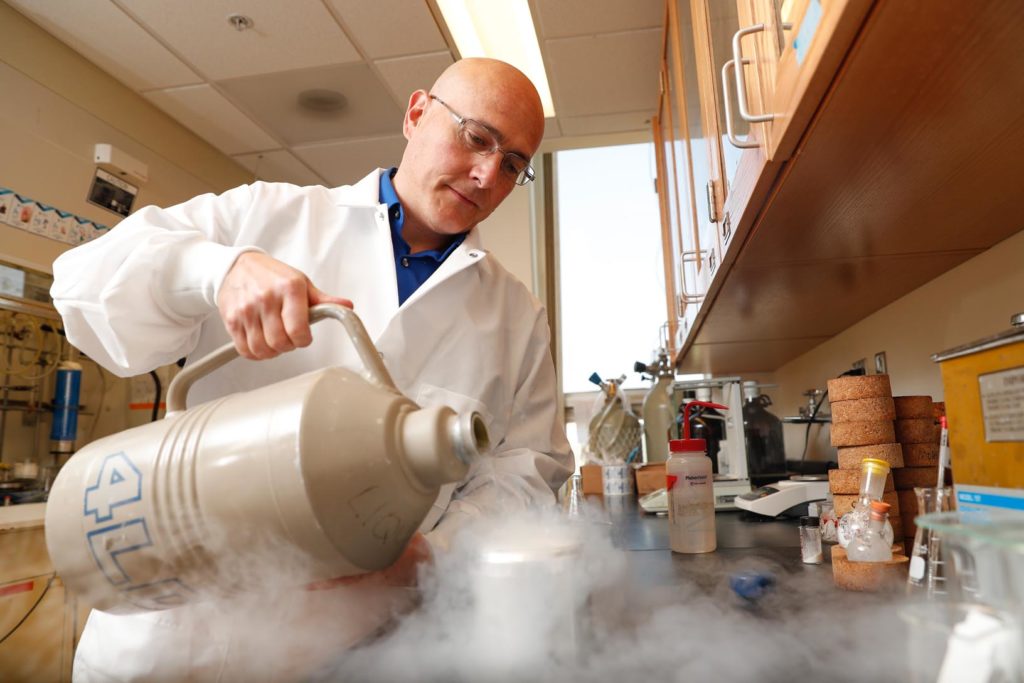 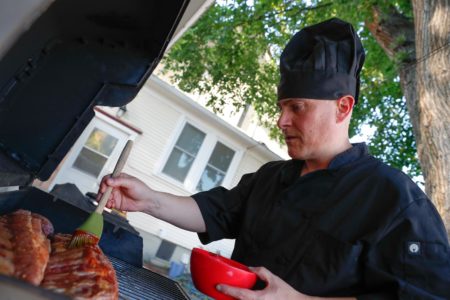