KEARNEY – Hausmann Construction has hired more than a dozen University of Nebraska at Kearney graduates over the past five years, with many of them serving as summer interns with the Lincoln-based company before they were retained for full-time positions.

This summer, the construction management, design-build and general contracting firm has four interns from UNK working on three different multimillion-dollar projects in Kearney.

There’s a reason one of the top contractors in the Midwest continues looking UNK’s way to grow its workforce.

“Our firm is not shy about discussing the quality of the students enrolled at and graduating from UNK, particularly those graduating from the construction management program,” said Chad Wiles, vice president of Hausmann Construction. “The UNK students we have hired show up on top of their game, chock-full of the knowledge, creativity and skills necessary to help them excel on dynamic commercial projects.

“We attribute these observations to the programming and the internship UNK requires for graduation.”

UNK has 24 construction management students interning this summer, with half of them in Nebraska and the other dozen in California, Colorado, Iowa, Minnesota, South Dakota, Texas and Washington.

The Hausmann crew members are working on a million renovation project at UNK’s Nebraskan Student Union, the million Village Flats residence hall, which is part of the new University Village development on the south edge of campus, and the .7 million Central Nebraska Veterans Home complex taking shape in northeast Kearney.

“Every Hausmann intern works right alongside our project management and field supervision staff to learn how our team estimates, sets up and manages the project,” said Wiles, who called the internship program a “primary recruiting tool for full-time construction management employees.”

“Because the nature of our internship program gives students first-hand experience with our operation and people, we typically find that the transition to full-time employment is much easier for our interns because they understand our firm and its standards so well,” he said.

These opportunities, with Hausmann and other companies across the country, are part of the reason UNK’s construction management program had a 100 percent job placement rate for 2017 graduates.

“The industry can’t get enough students, and they like our students,” said Jim Vaux, an assistant professor and chair of the Industrial Technology Department at UNK. “They pretty much all find jobs.”

Vaux said the U.S. construction industry is “booming,” and companies are scooping up all the workers they can find, especially from strong programs like the one offered at UNK.

This was evident during a recent student career fair in Kearney. The event usually attracts one or two construction companies, but there were 10 represented this year.

“There’s just a lot of interest right now,” Vaux said. “Companies are really looking for students because there’s so much work out there.”

And they’re offering some pretty attractive pay to fill these positions.

EXPERIENCE IN THE FIELD

David Almanza is following in the footsteps of his older brother Edgar by pursuing a construction management degree at UNK.

The senior from Imperial said he’s “really excited about the opportunities” in the industry and the likelihood of landing a full-time job after graduation.

Almanza interned two summers ago with Interstates Construction while the Sioux Center, Iowa-based company was working on a biodiesel plant expansion in Illinois. He’s back with the company this summer, this time in North Sioux City, South Dakota, at the site of a $120 million project for pet food manufacturer Royal Canin USA.

Almanza is assisting the project management team during the plant construction process, preparing requests for information, reviewing material and subcontractor costs and coordinating the schedule and manpower needs.

The 12-week internship started May 7 and he’s already planning to stay on an additional week or two to earn some extra cash before returning to school for his final semester.

Like Almanza, many construction management students complete multiple internships during their time at UNK.

“I think that sets us apart,” he said. “That’s something a lot of companies like.”

“It gives you a good look at what’s out there,” said Almanza, who wants to leave the state for a year or two before returning to Nebraska and working his way up to project coordinator.

That’s the path JD Stone took after graduating from UNK in 2012.

Stone interned with JE Dunn Construction and Kiewit Building Group during college, working on projects at Community Hospital in McCook and the TD Ameritrade headquarters in Omaha. He could have taken full-time jobs with either company, but chose McCarthy Building Companies in Phoenix, Arizona, instead.

Stone wanted to get out of his comfort zone while working for a large, national contractor. His first project was a $200 million hospital addition in Phoenix.

“I enjoyed that big construction experience, and it helped me with my time at Hausmann now,” said Stone, who spent about three years in Arizona before coming back to Nebraska.

He’s currently a project superintendent with Hausmann, living in Kearney and overseeing construction of the Central Nebraska Veterans Home complex that includes 11 buildings on a 67-acre site.

Stone was also part of the Hausmann team that built an $84 million facility for the University of Nebraska-Lincoln College of Business and completed a $34 million expansion at Scottsbluff High School, among other projects. He called his experience at UNK “invaluable” for his career.

“There’s a reputation out of Kearney right now,” he said. “The students there are really sought after.”

Stone, a member of the construction management advisory board at UNK, said the program is becoming a leader among Midwest colleges and universities, and many employers are taking notice.

“They know about UNK, they look for kids from UNK,” he said. “It’s a gold star on resumes.”

“They know how to work,” he said while citing the solid character and good morals common in Nebraskans as selling points for employers.

Vaux, who spent 25 years in the construction business before becoming a professor, expects to see the program’s popularity continue in the years ahead, especially after it moves into the new $30 million STEM building that’s scheduled to open in fall 2019. That, by the way, is another Hausmann Construction project.

“It’s an ever-changing industry, every project is different,” Vaux said. “Students like that. Once you get into it, you just really like it.” 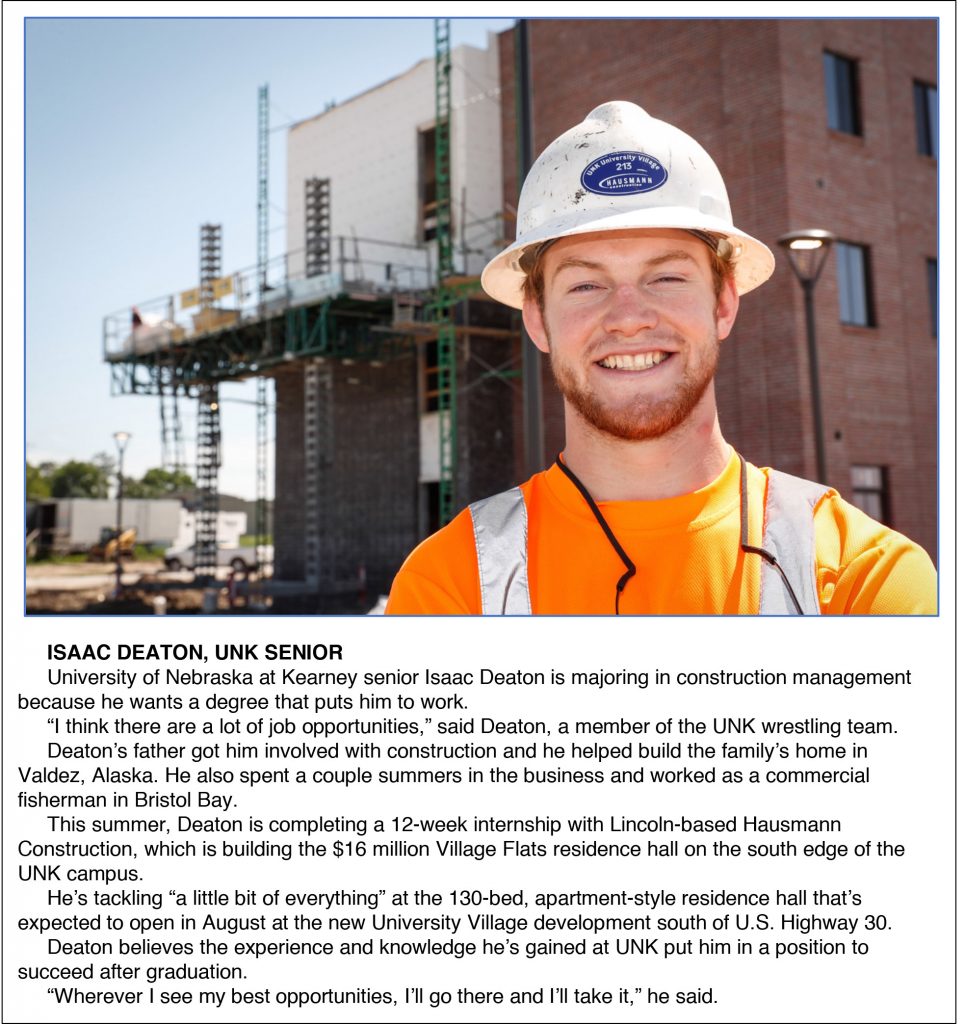 Joe Nerud, a 2007 graduate of the University of Nebraska at Kearney, has worked on projects across the state with Lincoln-based Sampson Construction.

The project manager now based in the company’s Kearney office calls construction management a challenging, but rewarding, career. “Every day brings new opportunities,” said Nerud, who interned with Sampson Construction while attending UNK.

The list of multimillion-dollar projects he’s been involved with includes an expansion at Gothenburg Health, construction of the Custer Federal State Bank building and Central Community College educational center in Kearney, an addition at Western Nebraska Community College in Scottsbluff and a mixed-use building in Lincoln’s Haymarket area that serves as the headquarters for engineering firm Olsson Associates.

He’s also part of the team that’s currently building the new KAAPA Ethanol headquarters just south of Kearney. Nerud said he enjoys the problem-solving that comes with taking a project from a stack of plans to a finished product.

“It’s fun to watch a giant structure come together,” he said.