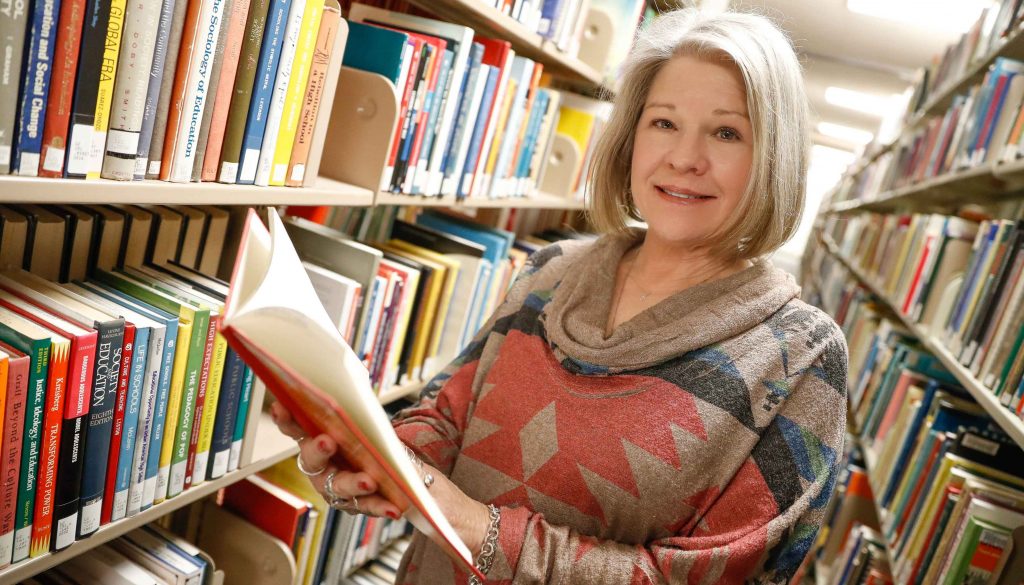 KEARNEY – When Dee Urwiller started working at the Calvin T. Ryan Library, staff members and students were still using catalog cards to track down books and other materials.

Most University of Nebraska at Kearney students stopping in today have never seen the library index cards that long ago went the way of film strips and floppy disks.

As head of access services – a position that oversees circulation – Urwiller has helped guide the UNK library through a number of changes during her 28 years there, including the conversion to an online system that replaced catalog cards with scannable bar codes.

“This particular area is always active – every day something different happens,” said Urwiller, who is retiring next month.

She’s witnessed the shift from physical items to online databases, e-books and digital magazines and watched her workplace evolve along the way.

“The use of this facility has changed a lot,” said Urwiller, noting that most library resources can be accessed from outside the building using a computer or smartphone.

But that doesn’t mean the library lost its purpose.

Urwiller said it’s more of a multipurpose space now. Students still come there for some quiet study time, and they’re also taking advantage of areas that allow them to work in groups, using their own laptops and devices or computers provided by UNK.

“It’s become a lot more collaboration space than it used to be,” said Urwiller.

The UNK Learning Commons, which provides tutoring, success coaching, writing assistance and other academic services, is also located on the library’s second floor.

Urwiller said the library staff is smaller now – about 25 employees, not including the Learning Commons – so they stay busy in the ever-changing environment.

“We have different people doing different jobs than we once did,” she said.

That’s something she’s used to.

Urwiller, who is originally from Ravenna, went to business school in Lincoln after high school to study computers.

“What do you do with computers in 1971 in Ravenna, Nebraska?” she said. “Nobody had computers yet.”

So, she handled the bookkeeping for grain elevators before landing a job at a Ravenna bank.

Her career path changed again in 1984, when a friend convinced Urwiller to go back to school. She enrolled at UNK at age 32, continued to work 30 hours a week at the bank and raised two children while earning a degree in history, psychology and social science education.

After adding a K-7 media endorsement, she took a job at the Calvin T. Ryan Library in 1990 and became head of access services the following year.

“It was an adventure,” said Urwiller, whose love of learning drew her to the university.

Urwiller, who has lived in Kearney since 1989, said she’ll miss her co-workers and the UNK students when she retires May 4 – the same day as the spring commencement ceremony.

One thing she won’t miss is waking up early to get to the library by 7 a.m. each day.

“I don’t think that’s going to be a hard habit to break,” Urwiller said with a smile.

Urwiller, who turned 66 on April 1, plans to relocate next month to Omaha, where her two children and two grandchildren live.

She’ll take plenty of memories from the UNK library with her, including a “crazy experience” after a storm flooded the building in 2013, damaging more than 6,500 books, and a carpeting project that extended into the start of classes last fall, creating a “constant scavenger hunt” for staff searching for items on the disheveled second floor.