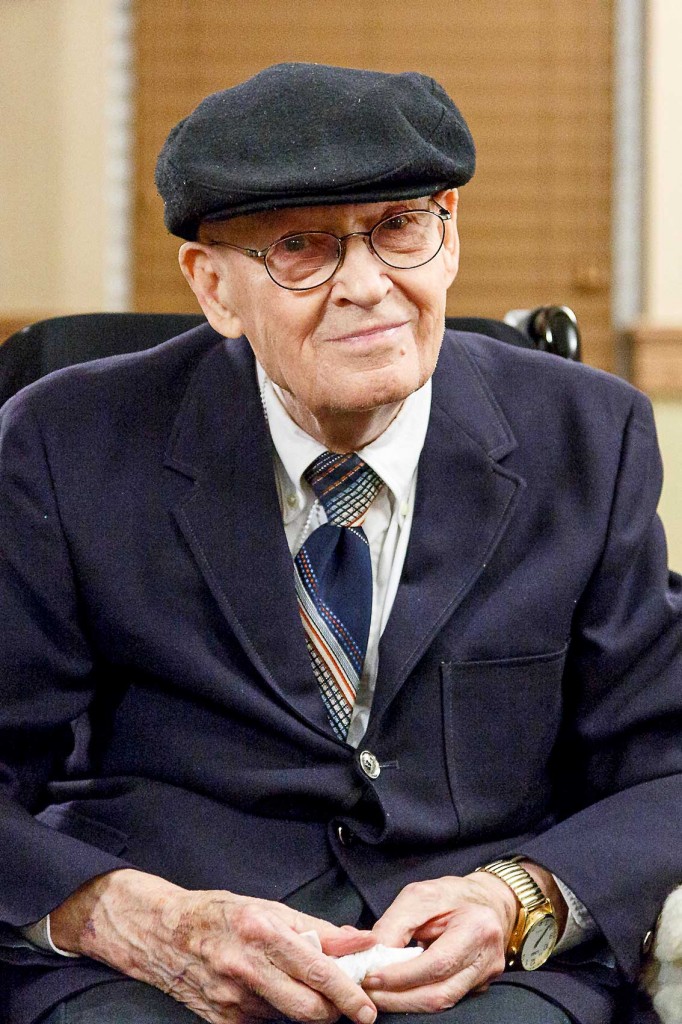 KEARNEY – Warren B. Messman turned 100 on Sunday. About 25 family members and close friends celebrated at Hillcrest Country Estates in Papillion.

There was coffee and lemonade. Vanilla ice cream. And two cakes: lemon and burnt sugar, which Warren’s wife, Mable, always made for him.

There was a table displaying cards and memorabilia sent from numerous friends, including items from the University of Nebraska at Kearney.

And there were stories. About sleeping all night in his Ford at Buda School, then shaving the next morning in the side-view mirror. That time he hosted an impromptu harmonica concert in his Mennonite school. His love of puns, double entendres and words such as “Johnny-villy-stick-anion-Ossemblosser.” The humble pride for his Dr. title, which he earned while raising teenage daughters and despite financial strains.

“I always believed that getting an education was the key to getting to where you want to be in life. My education at Kearney gave me that life and allowed me to help others reach their goals,” said the longtime Kearney resident and former professor at what is now the University of Nebraska at Kearney. “I was fortunate to be able to associate with people like Otto Olson and other faculty members and staff who laid the ground work and created the launching pad to make UNK what it is today.”

He was born Oct. 11, 1915, near Strang in southern Nebraska and grew up on a farm near Hebron. He attended Nebraska State Teachers College at Kearney from 1936-37 and returned in 1939 after teaching at country schools in Thayer and Fillmore counties.

His education was again interrupted in 1941 by his assignment to the War Department as an instructor of aircraft maintenance and later in flight engineering. Messman returned to Kearney in 1946 to complete his Bachelor of Arts in Education.

“I am proud of UNK because it makes a difference,” said Messman. “The campus has certainly changed since my days there as a student and a faculty member, but the principles of excellence in education have remained consistent. I look on UNK today and feel grateful to those who continue to make it among the best places to make dreams come true.”

After teaching several years in Aberdeen, S.D., he returned in 1953 to what is now UNK as an instructor in the Industrial Arts Department. Messman completed his doctorate and served as professor of industrial education at UNK, teaching industrial arts and safety education. He was department head from 1969-73 and served on the Graduate Council from 1963 until he retired in 1981.

Chancellor Doug Kristensen gave Messman a book for his 100th birthday celebrating UNK’s Centennial, which Messman said triggered memories of people and places in the 79 years since he first stepped on campus. Among his memories: faculty and family Christmas parties in the basement of Men’s Hall, garden plots near the old Kearney Lake dam and expansion of the Industrial Arts Department.

Messman and his wife, Mable, moved to Omaha in 2003. She died in 2012. The Messman’s were lifelong members of First United Methodist Church of Kearney before moving away.

“I think of how fortunate I was to go back to the university as a faculty member to serve and learn alongside people like Otto Olson, Calvin T. Ryan, Lyle Mantor, Herbert Cushing, Carrie Ludden and so many others,” Messman said. “My favorite landmark remains the Otto Olson building, which was not only my home away from home but also bears the name of my mentor from days as a student and faculty member.”

BIRTHDAY BOOK OF MEMORIES
Messman’s family, including daughters Marcia O’Donovan of Omaha and Lorene Bliss of Council Bluffs, Iowa, is putting together a book of memories from his life. Friends, former students and others are encouraged to share stories, cards and photos by contacting O’Donovan at Messman100@gmail.com 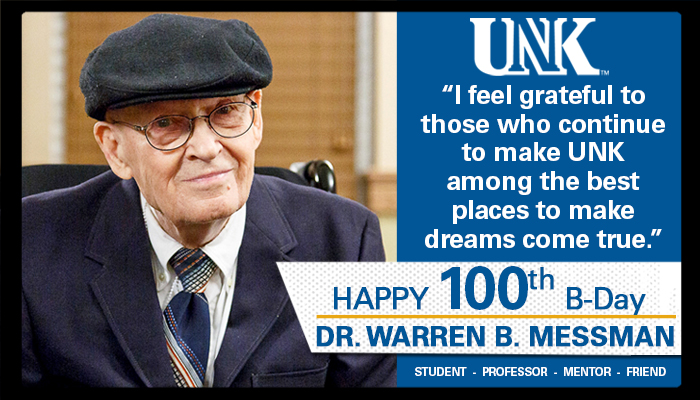