That is, until a University of Nebraska at Kearney computer science student put his emerging app-development skills to use developing a new mobile application.

After a semester of development through a unique industry-university development and internship program, Kearney school administrators and school nurses are putting the iPad app to use this fall compiling BMI student data in the schools.

The app is the brainchild of UNK faculty Kate Heelan and Bryce Abbey, who proposed the idea for the Hollman Internship Program project in December 2014. Intern Jacob McCann was selected from student applicants to work with Heelan and Abbey and experienced app-development mentors at Hollman Media in Kearney. McCann completed the app in July and has been working out the bugs this fall to see the final product, the School BMI Calculator, finished. It’s in use now.

“The app allows for easy recording of height and weight information that is used to calculate BMI,” McCann said. “The professors use the data that’s recorded to find trends and see what (health) programs work. The overall goal of the project is to track children to make sure their parents have the information they need to make sure they have a healthy lifestyle.”

Instead of paper forms, students’ height and weight are entered into the iPad app, which calculates the body-mass index, flags high scores through color-coding, then allows the CSV file (comma-separated values – like a spreadsheet) to be uploaded and transferred for district tracking and reporting.

Heelan, a professor of exercise science and director of UNK’s Physical Activity and Wellness Lab, has worked since 2003 with area schools to help children and families be healthy through good nutrition and physical activity. Obtaining and maintaining thousands of children’s height-weight records each year for multiple years is tedious and time-consuming – although critical for grant requests and reports.

“In Kearney Public Schools alone we do 2,500 (BMI tests) a year, but we have other communities throughout the state using the BMI Reporter who we can now share this with,” Heelan said.

Right now, another 18 school districts are coming on to the tracking program and they’re looking to add more. “School nurses are saying ‘if we can use that app, we’re totally coming on board’. It saves a ton of time for them.”

The success of Heelan’s lab’s work in improving children’s health in Kearney has made national attention. Obesity has dropped significantly. This month “Childhood Obesity” journal is publishing “The Kearney Nebraska Story” reporting that between 2006-12, absolute change in obesity in local children tested went from 16.4 percent to 13.9 percent – resulting in about 15 percent less overall obesity in the children.

Heelan and Abbey worked with McCann to compare ideas for how the app would look and function, then helped test prototypes and their operability, and now are working to get it finalized. It’s possible, they said, there may be a market for the app, but that wasn’t the objective.

McCann, a senior political science and computer science and information technology major from Kearney, is pleased the project is done, and proud of his accomplishment – a lot for an intern.

“I hope I set the bar high in that it’s a solid product that will be used. The primary goals were to save time and be more accurate,” he said. “If it doesn’t meet that goal it’s a failure; you want a good product and you want it to be used. It needs to be beneficial and doesn’t overly complicate things.”

McCann said he added a computer science and information technology major late in his college career – as a senior – after he spent eight months as an intern in Washington, D.C. There he worked on some computer projects while interning for Sen. Mike Johanns.

After reading Steve Jobs’ biography he became intrigued with the idea of using his creativity to solve computer problems, and he withdrew his pending application for graduation and added another major. He said he has gained confidence and valuable skills on the app-development project, which also combined his interest in health and physical activity. He enjoys rock climbing and works part-time for Campus Rec in the new Wellness Center, where Heelan’s lab is located.

“In terms of having this program to expose students to work, it’s hard to replicate the level of depth students could have in this project versus a semester-long class,” McCann said. “You’re using the fundamentals of programming, following the techniques you learned, and applying them.” He said he put 400-500 hours into the app.

“There’s that amazing feeling when you get it to work right, there’s a nice sense of accomplishment there, especially with this internship coming to a close. It’s been really awesome seeing it used for its application. It’s a really good feeling. Now I feel much more comfortable and confident in my abilities to solve problems and get things done on time.”

Travis Hollman, co-founder and president of Hollman Media, was hoping for such an outcome when he dreamed up the Hollman Intern Program in 2014. That spring his company was awarded the Walter Scott Entrepreneurial Business Award, with a $10,000 prize.

Hollman decided to contribute the award toward an internship collaboration that would benefit a student, the university, and his business – bringing him more UNK grads ready to work for him and gaining some ideas from students and UNK faculty. Chancellor Doug Kristensen matched Hollman’s donation to make the paid-intern program last at least two years. Ideas for new projects, new faculty and student interns for 2016 will be solicited soon.

“We really couldn’t have picked a better scenario for the first round of the program,” Hollman said. “The program is a bit innovative in its approach of matching faculty ideas, student talent, and industry mentors to build a new piece of technology for the university. That’s a lot of things to throw together in one pot, but it worked out great.

“We experienced few problems and all the parties who were involved really worked well with each other. I’m excited to see what the future holds for Jacob and for our program. What a great success story.”

McCann said he is now on track to graduate in December and plans to keep working locally with Hollman Media while saving money to relocate where he can enjoy rock climbing more often – say, Denver. 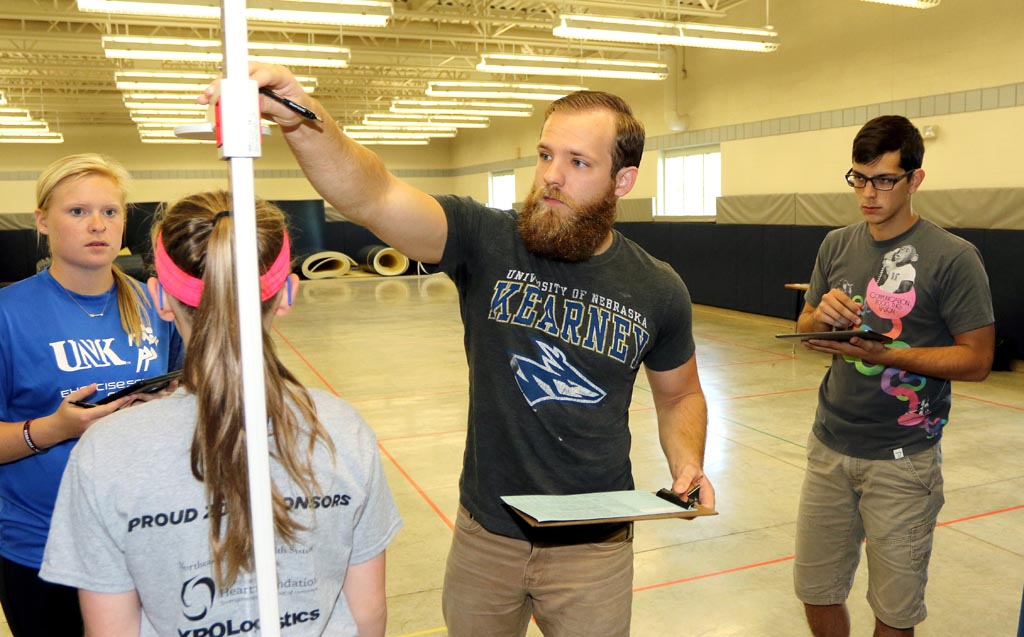