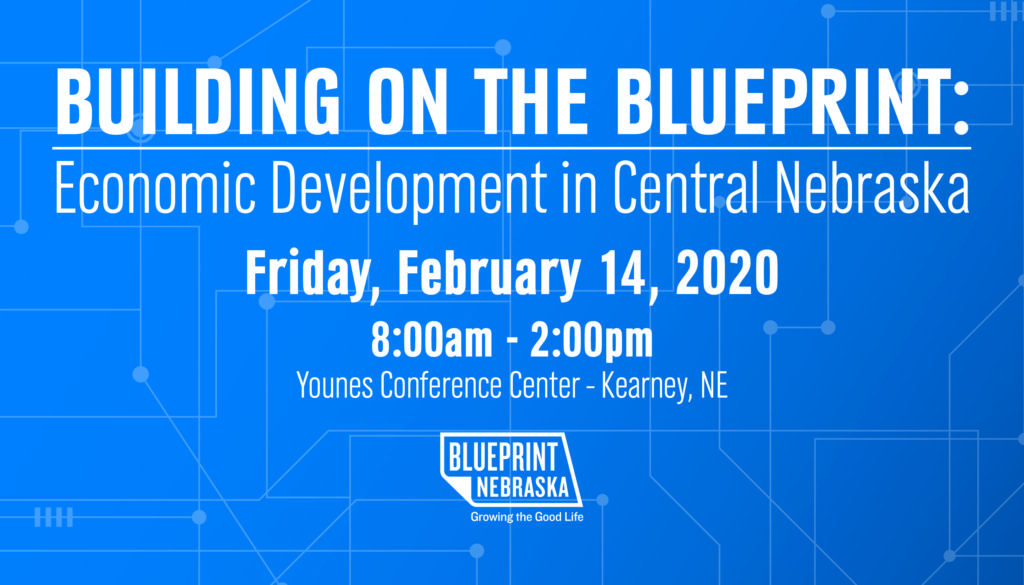 KEARNEY – An upcoming forum in Kearney will bring together experts, leaders and influencers to identify action steps to support economic development in south-central Nebraska.

Hosted by the University of Nebraska at Kearney, the Feb. 14 workshop at the Younes Conference Center will help advance and prioritize information and analysis in the 2019 Blueprint Nebraska report.

There is no charge to attend the event – called Building on the Blueprint: Economic Development in Central Nebraska – but registration is requested by Feb. 10. To register, visit www.unk.edu/blueprint

“We are all trying to improve Nebraska and our economy. We agree that Blueprint Nebraska’s four themes of people, places, government, and sectors matter to all of us,” said Bree Dority, UNK associate dean of business and technology and an event organizer.

“The power of us all coming together is important and can keep us all moving in the same direction. We need to build on momentum already established.”

A series of expert presentations and breakout conversations will allow attendees to discuss and help prioritize potential initiatives central Nebraskans can pursue to achieve goals described in its report.

“We have a shared interest in the economic and social well-being of greater Nebraska, and UNK has an important role to play as a convener and mobilizer that can make things happen,” said UNK Chancellor Doug Kristensen.

“It is natural that UNK plays a role and keeps conversation flowing,” Dority said. “My hope is we turn around and quickly produce a summary of the key takeaways from the event, including specific action items we central Nebraskans need to do to move forward. Collectively, we should identify the low-hanging fruit so that we can get some quick wins to keep the momentum going.”

Tom Henning, chairman / CEO, Cash-Wa Distributing
“Opportunities for Nebraska in Areas of Logistics and Supply Chain”
Henning is past chair of the Kearney Area Chamber of Commerce and Economic Development Council of Buffalo County, and he currently serves on the Nebraska Revenue Forecasting Board, Nebraska Chamber of Commerce and Industry Board and Federal Reserve Bank Board for the Omaha branch. He serves on advisory boards for the University of Nebraska at Kearney and University of Nebraska Medical Center and is a past chair of the American Wholesale Distributors Association and board member of International Food Distributors.

Cindy Johnson, president, Grand Island Area Chamber of Commerce
“Powering our economy with people by retaining residents, attracting new Nebraskans and tapping our universities to equip people with high-demand skills.”
Johnson has led the Grand Island Chamber since 2003. Her career also includes 11 years as community projects director for the city of Grand Island, a position she held from 1992-2003. The Grand Island Independent’s Woman of the Year in 2010, she was instrumental in bringing the Nebraska State Fair to Grand Island. She has served on the Nebraska Educational Leadership Council and Heartland Events Center Board and mentored and trained women entering the business world.

BG Moore, President, Xpansion / UST Global Group and Step IT Up America
“Success and Vision for Expanding the Step IT Up America Program to Kearney and UNK.”
As President of Xpansion, a consulting firm owned by UST Global, Moore oversees IT consulting services delivered through U.S. centers in Kearney; Lincoln; Fort Collins, Colorado; Manhattan, Kansas; Ames, Iowa; and Alpharetta, Georgia. He also run Step IT Up America, which recruits women, minorities and veterans who don’t have academic training in technology. The program trains them and turn them into entry-level technologists. Prior to his current position, Moore was Chief of Staff of UST Global and before that worked at Ernst & Young and Computer Science Corporation. He is a Certified Public Accountant.

Darren Robinson, president, Economic Development Council of Buffalo County
“Nebraska Advantage, ImagineNE (LB720), Taxation and Incentives”
Robinson is a Kearney native who began his career in technology with the University of Nebraska at Kearney, IBM, Cabela’s and Frontier Communications. His economic development career includes working in site selection across 30-plus states and more than 100 communities nationwide, securing more than $150 million in incentives for the private sector. As president of the Economic Development Council, his work includes recruiting businesses for the Tech oNE Crossing shovel-ready technology park in Kearney.

Jim Smith, executive director, Blueprint Nebraska
“Overview of the 15-point Plan for Blueprint Nebraska and the Breakthrough Delivery Process for Implementation”
Smith served in the Nebraska Legislature from 2010-18, chairing the Revenue and Transportation and Telecommunications Committees. He authored companion bills LB610 and LB960, which resulted in one of the largest and most historic infrastructure programs in recent state history. Smith has been a small business owner and investor for nearly 15 years and also spent more than 25 years in the electric and gas utility industry, working for investor-owned utilities and public power in Nebraska.