KEARNEY – Nathan Moore can tell you the exact number of tornadoes he’s seen in his life.

“That’s like your trophy,” Moore said. “It’s your reward. You definitely keep track.”

Moore, who works in information technology services at the University of Nebraska at Kearney, has been recording thunderstorms and other natural phenomena for nearly three decades.

What started as an on-and-off hobby is now a second profession for the 47-year-old.

“I love seeing what Mother Nature can do,” Moore said. “I just love it.”

Raised in the Chicago suburb of Downers Grove, Illinois, Moore can trace his infatuation with severe weather to a single event.

He was driving along Interstate 55, about 30 miles southwest of his hometown, when an F5 tornado struck the nearby community of Plainfield in August 1990. The powerful twister killed 29 people, injured 350 and caused an estimated $160 million in damage.

“I wanted to know why that happened, and I just became fascinated with tornadoes,” Moore said. “I’ve been chasing storms ever since.”

The U.S. Air Force veteran enrolled at UNK in 2012 with a goal of one day joining the National Weather Service, then a different opportunity arose.

Around 2014, while studying geography and geographical information science at UNK and working in the ITS department, Moore launched StormViewLIVE, a business that specializes in real-time severe weather coverage. The venture blew up like a spring supercell and now includes a network of about 140 chasers across the country who share content on a single website – stormviewlive.com – as well as livestreaming platforms such as Twitch. He added SVLMedia so chasers could monetize their efforts by selling video to The Weather Channel, ABC, NBC, CBS, CNN and other networks.

“It’s probably one of the top two storm-chasing organizations in the country,” said Moore, currently a part-owner of the company. “You’ll see our videos across the country.”

His reach extends even farther for livestreaming, which captivates viewers around the world. Many of his online followers live in countries where tornadoes don’t occur.

“I get a lot of excitement from seeing their reactions in the livestream,” Moore said. “That keeps me motivated to continue going out there to do this stuff.”

There’s another, much more important, reason he’s on the road during risky situations.

Like many chasers, Moore and his StormViewLIVE partners relay information to the National Weather Service, giving the agency valuable field reports to supplement radar data. Moore also chases for KETV and NTV in Nebraska, providing those services at no cost.

“My goal is to get out warnings for the state of Nebraska as fast as possible,” he said. “If I can give us an extra 10 minutes when there’s a tornado, then I’m helping people.”

Moore, who lives in Kearney with his children, ages 12 and 14, chases storms year-round, but he’s busiest from late April through June – the height of tornado season in the Midwest. He’ll head out several times a week during this period, hitting Nebraska storms after work and blowing through his vacation days to get to major systems in other states.

The ITS technical consultant and tech coordinator for UNK’s College of Arts and Sciences racked up 60,000 miles chasing storms in 2017. He’s “really cut back” since then, projecting only 40,000 to 45,000 miles this year.

“It’s so expensive,” said Moore, who’s on his third vehicle in seven years.

After an encounter with grapefruit-size hail last year near Julesburg, Colorado, he upgraded to a 2015 Jeep Grand Cherokee that carries all his electronic and medical equipment, plus a fold-up mattress in case he needs to sleep in the vehicle.

“Now I have a nice, new Jeep with no dings in it yet, so I’m very careful to try to stay out of trouble and see how long we can keep this vehicle in really good shape,” he said.

“It’s gotten to the point where I’ve seen about everything,” he said, including a personal-best 18 tornadoes in one day.

Although he’s passionate about storm chasing and recently earned a meteorology degree through Mississippi State University’s online program, the 2017 graduate of UNK has no intention of leaving his day job to pursue a weather-related career.

“I plan on staying here and retiring,” he said. “I love my job. I love working here. I love working with computers – that’s my second passion. I’m very happy here and I have a team above me that supports me.”

After retirement, though, Moore can already see himself traveling the country in a camper, looking for that next storm to add to his tornado count.

MOORE’S TORNADO TIDBITS
Total tornadoes witnessed: 216
This year’s total: 15, including five on May 17 near Stockville and Cozad in south-central Nebraska
Most in one day: 18 on May 9, 2015, when Moore tracked a storm system from Eads, Colorado, to McCook, Nebraska
Hawkeye hex: “Of all those tornadoes, I’ve never had one tornado in Iowa. Never one,” Moore said. “It’s obviously a huge goal of mine to get a tornado in Iowa.”
Scariest chase: Hurricane Harvey in 2017, when Moore drove into the storm’s northern eyewall near Rockport, Texas. The winds gusted to 140 mph and the storm surge was too close for comfort. “I thought for sure I was dying there,” Moore said. “It gave me a lot of respect for hurricanes.” 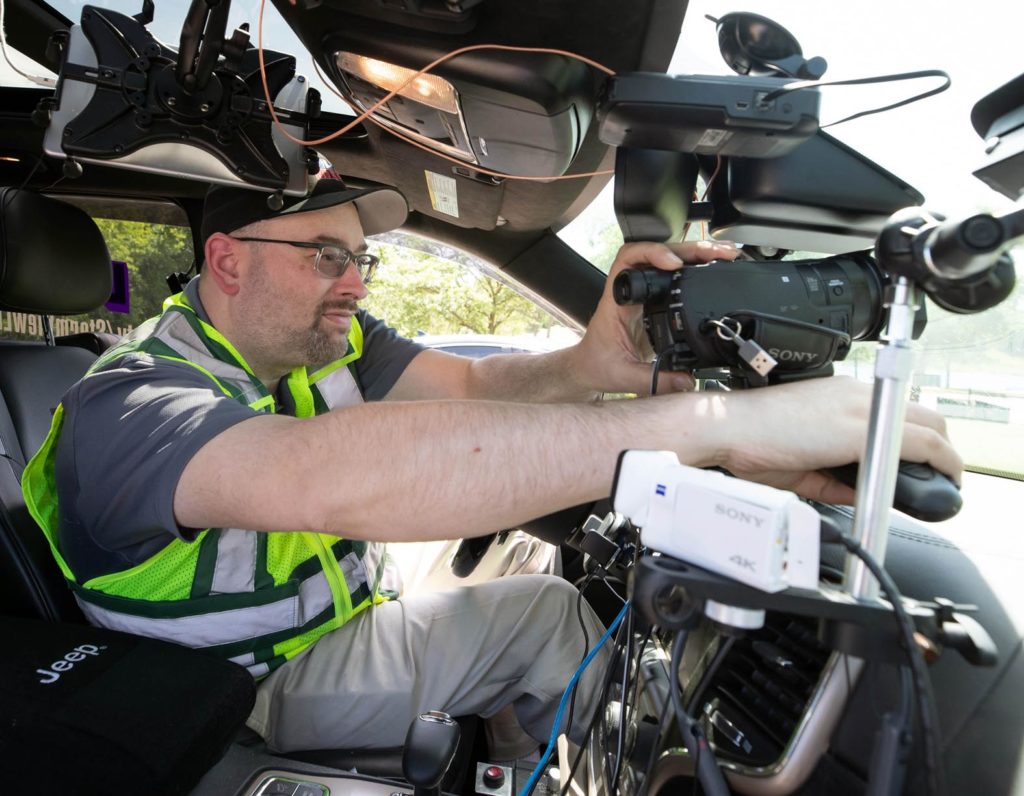