KEARNEY – The University of Nebraska at Kearney Alumni Association recognized five students with Outstanding Senior awards during Thursday’s Applauding Excellence ceremony on campus. The award honors UNK seniors for excellence in scholarship and leadership, as well as involvement and dedication to the university and Kearney community. Recipients were selected by a panel of UNK alumni.

McKenzie Cuba of Silver Creek
McKenzie Cuba, the daughter of Frank and Nancy Cuba, will receive a comprehensive business administration degree with a management emphasis and minor in photography. She plans to attend graduate school at UNK to pursue a master’s degree in student affairs. Cuba served as president of the Loper Programming and Activities Council (LPAC) and FIRST Leaders, and was assistant chief of staff for UNK Student Government. She was also a Student Diplomat, New Student Enrollment leader, Loper Leader and Blue Gold Welcome coordinator. Cuba was a member of Enactus, Launch Leadership, Honors Program, Mortar Board and the Beta Gamma Sigma and Phi Eta Sigma honor societies. She runs her own photography business and works for The Buckle.

Kolten Harshbarger of Kearney
Kolten Harshbarger, the son of Kyle and Dena Harshbarger, will receive a degree in information technology with an emphasis in system administration and minor in information networking and telecommunications. He accepted a position with Five Nines in Omaha.Harshbarger was active in the Cyber Security Club, serving as president for one year, and as a student worker providing IT support for the Colle ge of Natural and Social Sciences, taking a lead administrator role his junior year. He has been a networking and information systems intern for Educational Service Unit 10 in Kearney since 2017. Harshbarger also completed three independent study projects.

Austin Partridge of Grand Island
Austin Partridge, the son of Margaret McManaman, will receive a degree in business administration with a finance emphasis. He accepted a position with First National Bank in Omaha. Partridge served as student body president and the UNK student regent. He was a Chancellor’s Ambassador and member of the Sigma Phi Epsilon fraternity, Honors Program, Mortar Board, Beta Gamma Sigma, Order of Omega and dean’s list. Partridge served as a resident assistant and completed internships with Axis Capital and the Federal Deposit Insurance Corporation.

Ivy Prater of Elgin
Ivy Prater, the daughter of Cindy and Tracy Prater, will receive a degree in organizational communication with a minor in marketing and management. She will work for the National Rural Electric Cooperative Association in the Washington, D.C., area. Prater served as student body vice president and president of the Alpha Phi sorority. She was a member of Mortar Board, Gold Torch Society, Order of Omega, Lambda Pi Eta and Phi Eta Sigma and served as a resident assistant and Student Diplomat. Prater completed her internship with the National Rural Electric Cooperative Association in Arlington, Virginia. 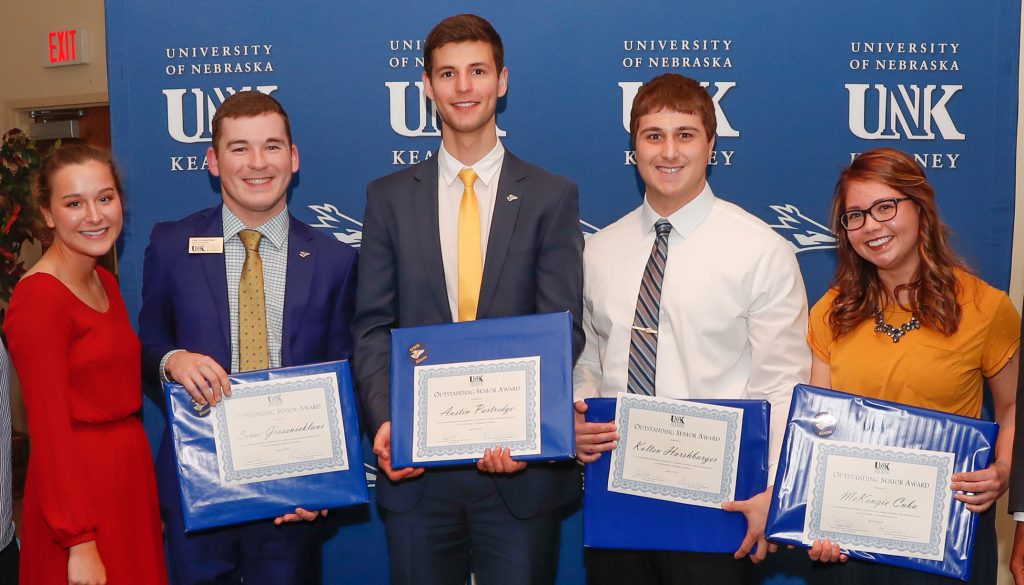