You are here: Home / News / Bell Tower plays modern music for all to enjoy
Post Views: 3,593 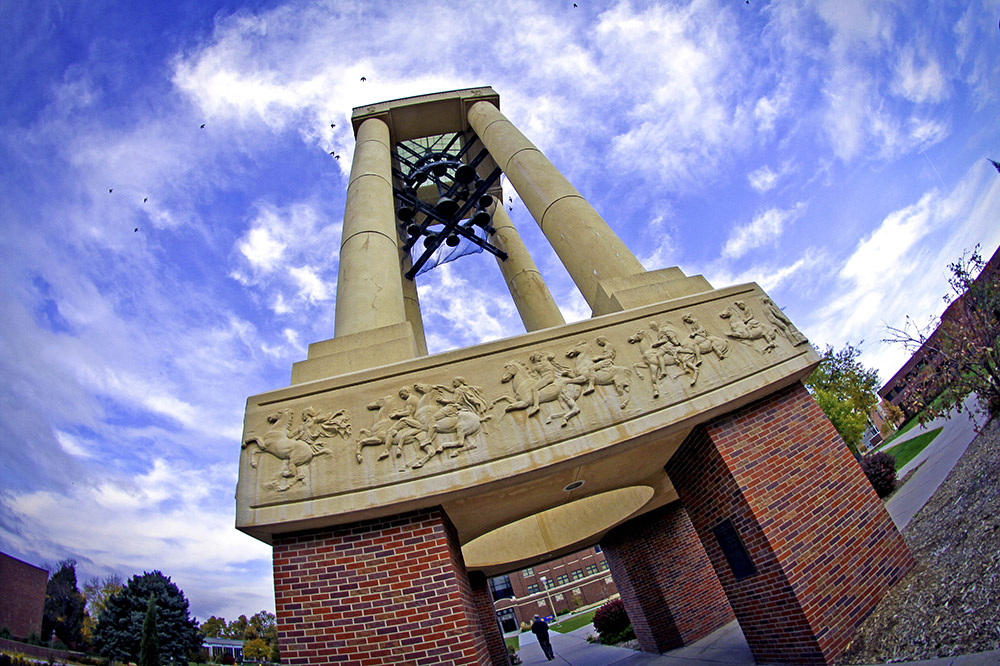 KEARNEY – A University of Nebraska at Kearney student walking across the quad on campus suddenly stopped. He lifted his phone, pointed it at the bell tower and began recording as Lady Gaga’s “Bad Romance” chimed.

“I think having music on the bell tower is a refreshing experience when you’re walking across campus. It’s enjoyable. People enjoy hearing the music,” said Dean of Natural and Social Sciences John La Duke.

Since La Duke took responsibility for the music a year ago, the list of songs that ring from the Peterson-Yanney Memorial Bell Tower has expanded.

The bell tower plays “Hey Jude,” “Here Comes the Sun” and “Eleanor Rigby” by the Beatles; “Bad Romance” by Lady Gaga; “Billie Jean” by Michael Jackson; “Born in the U.S.A.” by Bruce Springsteen; “Stairway to Heaven” by Led Zeppelin; “Hotel California” by the Eagles; “Set Fire to the Rain” by Adele; and the theme song from Harry Potter.

“We try to come up with music that students would recognize,” La Duke said. “Some of the music that was on there before was from the 50s, and if you’re old enough to remember those songs that would be appropriate. But the students that we have maybe don’t remember that music or don’t appreciate it, so we have been trying to find some things that they would appreciate.”

Seasonal music also plays, such as the “Addams Family Theme Song” during Halloween, and “Pomp and Circumstance” during commencement ceremonies. All music is approved by Vice Chancellor of Business and Finance Barbara Johnson.

The 66-foot tall Peterson-Yanney Memorial Bell Tower, a gift in memory of the George and Venetia Peterson and Elias and Mary Yanney families, was erected in 1986.

The tower features 24 bronze bells cast by the Paccard Bell Foundry in France. The bells weigh a total of 5,790 pounds. The smallest weighs 48 pounds and is 11.5 inches in diameter. The largest weighs 1,477 pounds and has a diameter of 41 inches.

“My office overlooks the quad where the bell tower is and, to me, it was an under utilized resource. It has 24 bells, and we were only using a few of them,” said La Duke, who discovered some bells needed repair in order to play songs.

When La Duke first came to campus, the bell tower simply rang each hour. “I decided that it probably had more capability than that.”

The bells actually went silent in 2002, and were restored in 2005 by students Brett Chloupek, Dustin Kozal, Aaron Graddy and Davin Jones. All computer science information systems students at UNK, they created new software to get the tower in working order.

The bell tower is controlled by an automatic electronic keyboard, which can also be played manually.

“Getting the music set to the bell tower has been a little bit of a challenge,” La Duke said. “As I understand it, typically in keyboarding you can play multiple keys at one time and they blend together in favorable ways. Well, the bell tower doesn’t do that very well. It doesn’t like two bells sounding at the same time.”

La Duke, who is not a musician, has recruited students, staff and faculty to write and record music for the bell tower.

Gibbs writes, performs and records music for the bell tower. He has recorded “When I’m Gone” from the movie Pitch Perfect, “Let it Go” from the movie Frozen, “True Colors” by Cyndi Lauper and “Edge of Glory” by Lady Gaga.

Recording music for the bell tower has sparked an interest for Gibbs. He’s been doing his own research on its history.

“It’s kind of like an escape from what I normally do, which is sit in a practice room most of the day. This job is nice for me to get a chance to use some of the things I’m learning and give back to the campus. It’s been a lot of fun.”