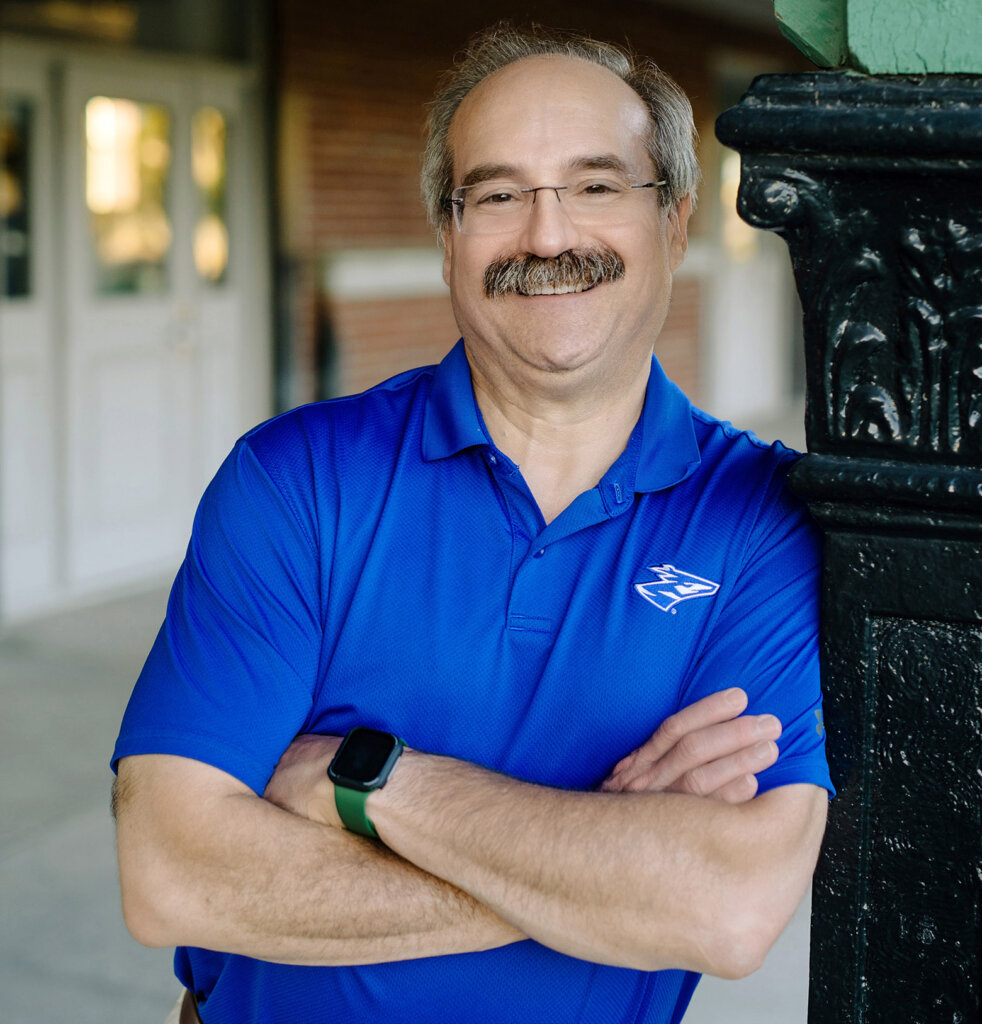 KEARNEY – There’s a specific moment when Doug Biggs’ parents realized their child was destined to be a historian.

He was just 5 years old, sitting cross-legged on the floor at their Ames, Iowa, home, his eyes glued to the small, black-and-white television in the family’s living room. The young boy was captivated by, of all things, the 1960 British war film “Sink the Bismarck!”

“Ever since I can remember, I wanted to be a historian,” Biggs said. “I just thought that was the best thing. I love history. I love the process of history. I love to read about it. I really like to write it. And I like to talk to students about it and get people excited about it.”

A University of Nebraska at Kearney faculty member since 2008, Biggs uses this passion for the past to make history “come alive.” He doesn’t expect his students to memorize every random date and fact. Instead, he “teaches by story,” allowing them to see how different events interconnect.

“You should love history, because history is about people,” he tells his students. “And people are inherently interesting. We talk about people every single day, whether we’re sitting at dinner, having coffee or hanging out with our friends. We’re always talking about other people.

“History is all about people to me, and it’s all about telling stories that matter.”

The author of countless academic articles and several books, the bulk of Biggs’ research focuses on late medieval England, specifically the reigns of Richard II, Henry IV and Henry V.

This period, from the 1370s to the 1420s, has been an interest area since Biggs attended Iowa State University.

“When I got to Iowa State as a student, their medievalist was by far the most inspiring instructor in the entire department,” he said, referencing his former adviser Ken Madison. “I just gravitated into his orbit.”

Biggs earned bachelor’s and master’s degrees in history from Iowa State – where his father taught geology – and was influenced by Barbara Hanawalt, a renowned historian of medieval England, while earning his doctorate at the University of Minnesota.

“During my time at Minnesota I met some of the most important and successful scholars working on late medieval England. They liked my work and asked me to submit articles to journals and book proposals to presses for publication. The unwavering support and kindness of my friends in American and British universities greatly enhanced my career,” said Biggs, who worked at Des Moines Area Community College, Iowa State University and Waldorf College before joining UNK.

He considers the late 14th century and early 15th century to be an “incredibly fascinating” period of parliamentary growth and maturity – a time when England underwent drastic transformations politically, socially and economically. 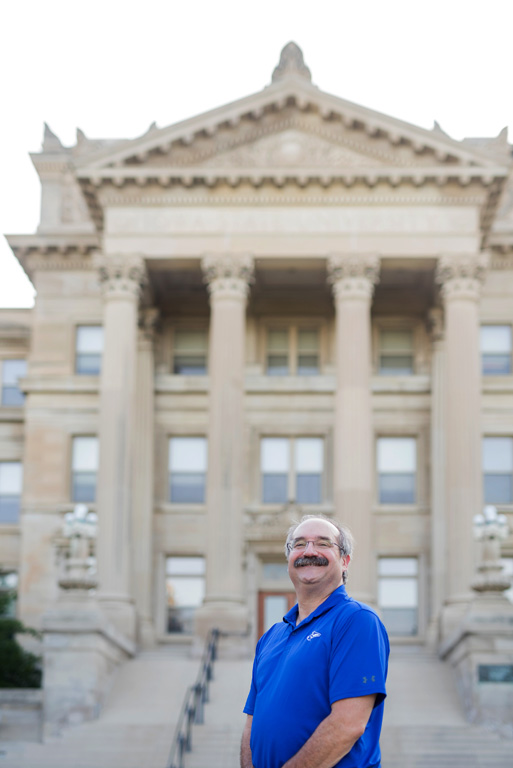 “That great transition is also accompanied by the great plagues,” Biggs notes. “You get a really good chance to see the political machinery of the kingdom at work.”

A former visiting professor at the University of York and fellow at the Borthwick Institute for Archives, Biggs has been visiting England since the late 1980s to conduct his research. His iPhone contains thousands of images collected from The National Archives in London.

“That’s why I have like a terabyte of storage on Dropbox,” he said with a smile. “I have these huge files of documents.”

Biggs has presented his research at international conferences on both sides of the Atlantic, and he serves as the managing series editor for Late Medieval Europe, a monograph series from Brill Academic Publishers in the Netherlands.

Among his most influential publications, Biggs has frequently written about Edmund of Langley, first duke of York, a man he “rehabilitated from the scrapheap of history.”

“He was seen by professional historians since the 18th century as being a complete wastrel and loser because he was left in charge of England as guardian of the realm in 1399 when Richard II went to campaign in Ireland,” Biggs explained.

That’s the year Henry of Lancaster, once exiled from England by his first cousin, King Richard II, returned to the country and took over the throne as King Henry IV. Historians viewed Edmund of Langley unfavorably because he failed to prevent the coup while Richard II and the English army were in Ireland.

“He was a politician, not some weak loser who just watched from the sidelines. He was very involved in the governance of the realm, both before 1399 and after,” said Biggs, who writes about Edmund of Langley in “People, Power and Identity in the Later Middle Ages: Essays in Memory of W. Mark Ormrod,” published by Routledge in 2021.

Eventually, Biggs plans to author his own book on the first duke of York.

He’s also written extensively on King Henry IV, who ruled from 1399 to 1413 and faced repeated uprisings led by powerful nobles.

Scholars believed Parliament seized power from Henry IV because he was an ineffective leader. “This was seen as kind of a revolution in government,” Biggs said.

However, his research shows the king suffered a serious ailment in 1406 that left him incapacitated, forcing Parliament to make decisions in his place.

“I think that’s an incredibly significant thing because there’s no other medieval English monarch who does not rule for half his reign and still dies peacefully in his own bed,” said Biggs, whose work has appeared in the Journal of Medieval History, Journal of Historical Review, Journal of Medieval Military History, Czech and Slovak Journal of Humanities and other academic publications.

A recipient of the prestigious Pratt-Heins Faculty Award for Scholarship and Research and other UNK honors, Biggs teaches courses on American history, European history, western civilization and historical methods, reaching every level of student from freshmen through graduate school.

But there’s only so much space inside a classroom.

“Through writing and research, I’m able to reach a broader audience, not only in my own career and my own lifetime, but beyond,” Biggs said. “It’s a way to touch the future and it’s a way to educate people who I’ll never meet.”

He uses travel as another educational tool.

“Actually seeing a cathedral, visiting a battlefield or living in a city in a foreign country for an extended period are the best education of all,” he said.

The UNK professor led students on a 10-day Holocaust tour through Eastern and Central Europe with EF Educational Tours in 2016 and took students on a 10-day tour commemorating the 75th anniversary of the D-Day landings in Normandy in 2019. He also led students on 12-week study abroad experiences through UNK’s partnership with Palacky University in Olomouc, Czech Republic, in 2018 and 2019. In the fall 2021 semester, he was appointed as a J. William Fulbright Distinguished Professor in the history department at Palacky University. 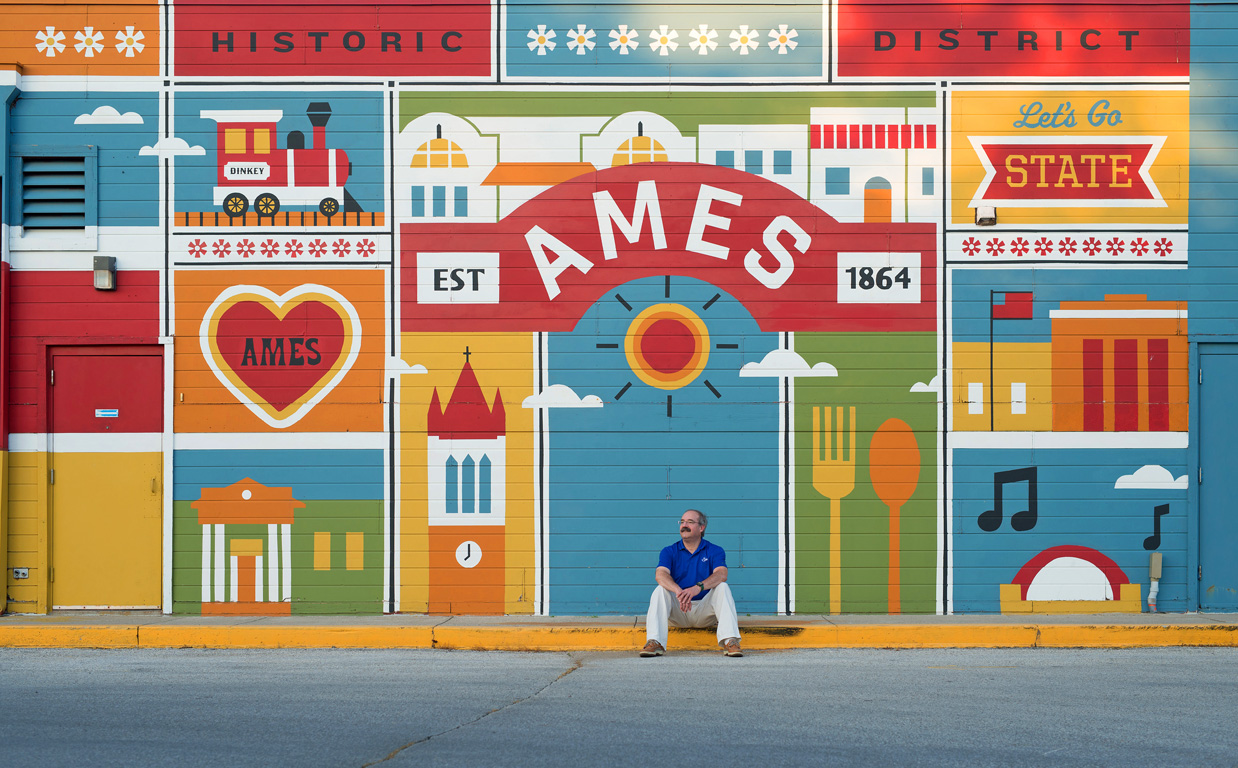 Although Biggs doesn’t teach Iowa history at UNK, that’s become another area of expertise over the past 13 years.

He and his wife Gloria Betcher, an Ames City Council member and Iowa State University English professor, still live in the community, allowing him to develop a deeper connection with his hometown.

This interest blossomed in 2009, when Betcher was chairwoman of the Ames Historic Preservation Commission.

Union Pacific owned an old, derelict bridge spanning the Ioway Creek – about 50 yards from railroad’s main line – that the company wanted to get rid of.

“The railroad was terrified about liability,” said Biggs, noting the lack of guardrails and abundance of unauthorized pedestrian traffic.

UP offered to give the bridge to the city of Ames, which asked the preservation commission to determine whether the property had any historical value. Biggs and his wife explored the area on Thanksgiving weekend, then researched its history.

The bridge definitely wasn’t worth saving, but that work led to a far more interesting discovery.

From 1891 to 1907, the Ames & College Railway provided transportation between the city of Ames and Iowa State University, known then as Iowa Agricultural College. Created by a group of local investors and nicknamed the “Dinkey” because of its small size, the railway spanned just 2 miles and operated with two steam locomotives, three passenger cars and a flat car. But it was an important connection between campus and the Chicago and North Western Depot downtown.

“That little thing carried more than 2.1 million passengers over the 16 years of its existence,” Biggs said. “It carried students to the city, the city to the college, the college to the world and the world to the college. It helped make Iowa State an institution of regional and national significance.”

Biggs has written about the Dinkey for Iowa State University, and two of his articles were featured in The Annals of Iowa, a history journal published by the State Historical Society of Iowa. His newest book, “The Dinkey and Community Memory: Ames, Iowa Agricultural College and the Ames & College Railway,” will be published next year.

Biggs and Betcher also co-authored “Images of America: Ames,” which tells the city’s story through photographs. He’s presented public lectures on a variety of historical topics related to the city and university, including 1890s football, Iowa State during World War I and II, Ames’ attempt to steal the county seat in the 1870s and, most recently, Ames Public Schools in the 1880s and 1890s.

“I want to write things that people use and people find valuable,” Biggs said. “That, to me, is the best part of doing research – being able to look at the past in a different way than we have before and make a convincing argument that moves the historiographic discussion forward. If your work is able to do that, then I think you’re a success as a scholar.”