By OLIVIA CASPER
The Antelope

KEARNEY – Bryant Isaacs balances cheerleaders on his shoulders while juggling an exercise science major and a food service job.

The junior from South Africa traveled to the United States to attend Mid-Plains Community College before transferring to the University of Nebraska at Kearney last year.

“My aunt came and visited me and wanted to know what I had been doing, and at the moment I really wasn’t doing anything besides working,” Isaacs said. “She ended up asking me if I wanted to study overseas, and of course, I said yes. Since I was little, I have always wanted to live there. I feel like it is where I was meant to be.” 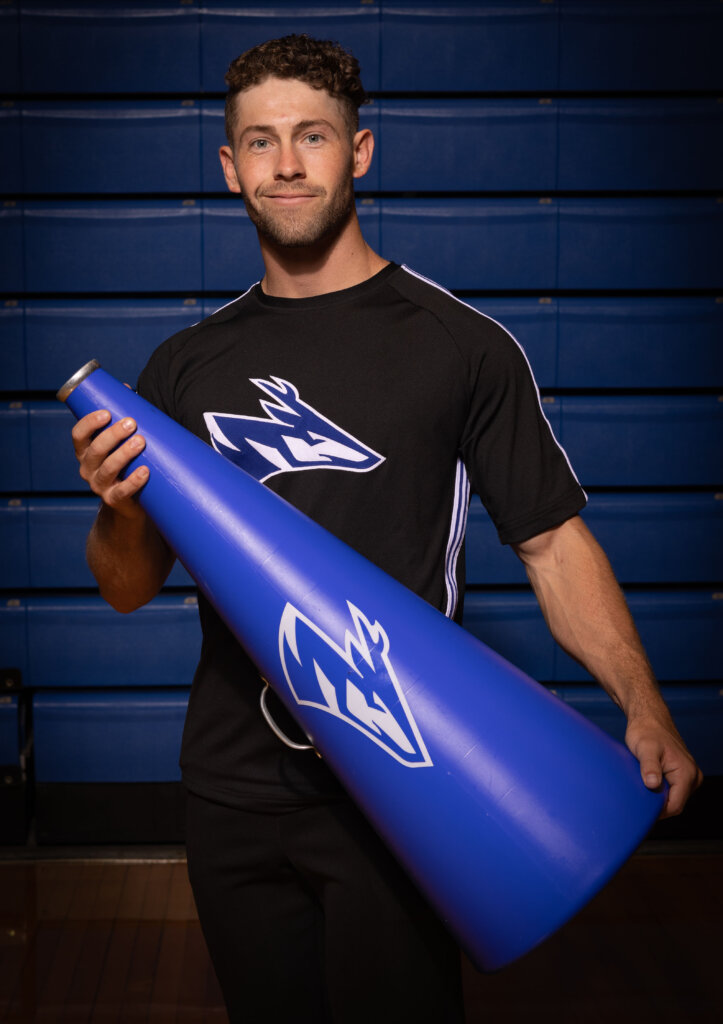 In his second semester on campus, the UNK cheer team recruited Isaacs because of his strength, which he built up through working out.

“A senior at the time approached me because she and her coach had talked and had seen me powerlifting, so obviously I could lift a lot of weight,” Isaacs said. “The coach and I talked, and they offered me an awesome deal, and it has been a lot of fun.”

Isaacs jumped right into cheering for UNK in the middle of the season, even though he had no prior experience. He cheered at his first game a couple days after joining.

“Bryant brings such a unique energy and dynamic to the team,” said Krista Williams, UNK cheer coach. “He is super encouraging and is like the hype man. He joined in the middle of the season and everyone already knew everything. He just jumped right in and learned quickly.”

Alongside cheering, Isaacs works at Chick-fil-A in the Nebraskan Student Union on campus. He enjoys building relationships with co-workers and customers.

“Every time we’re working at the front, it’s just nothing but constant laughs,” said Trenton Harbur, his team leader. “We love cracking jokes with each other. We’ve also had just some really deep conversations when Chick-fil-A isn’t busy and we can sit there and talk for a second.”

Isaacs said his favorite part about being involved with Chick-fil-A and the cheer team is spending time with different people. After graduation, he hopes to travel to see new places and meet more people.

“You either choose to be happy or you choose not to be happy,” Isaacs said. “It’s the choice of being happy. I appreciate how far I have come and what I’ve done in life. Honestly, if I were to die tomorrow, I wouldn’t regret anything because everything happens for a reason. And I just simply enjoy a lot of things.”

This story first appeared in The Antelope student newspaper