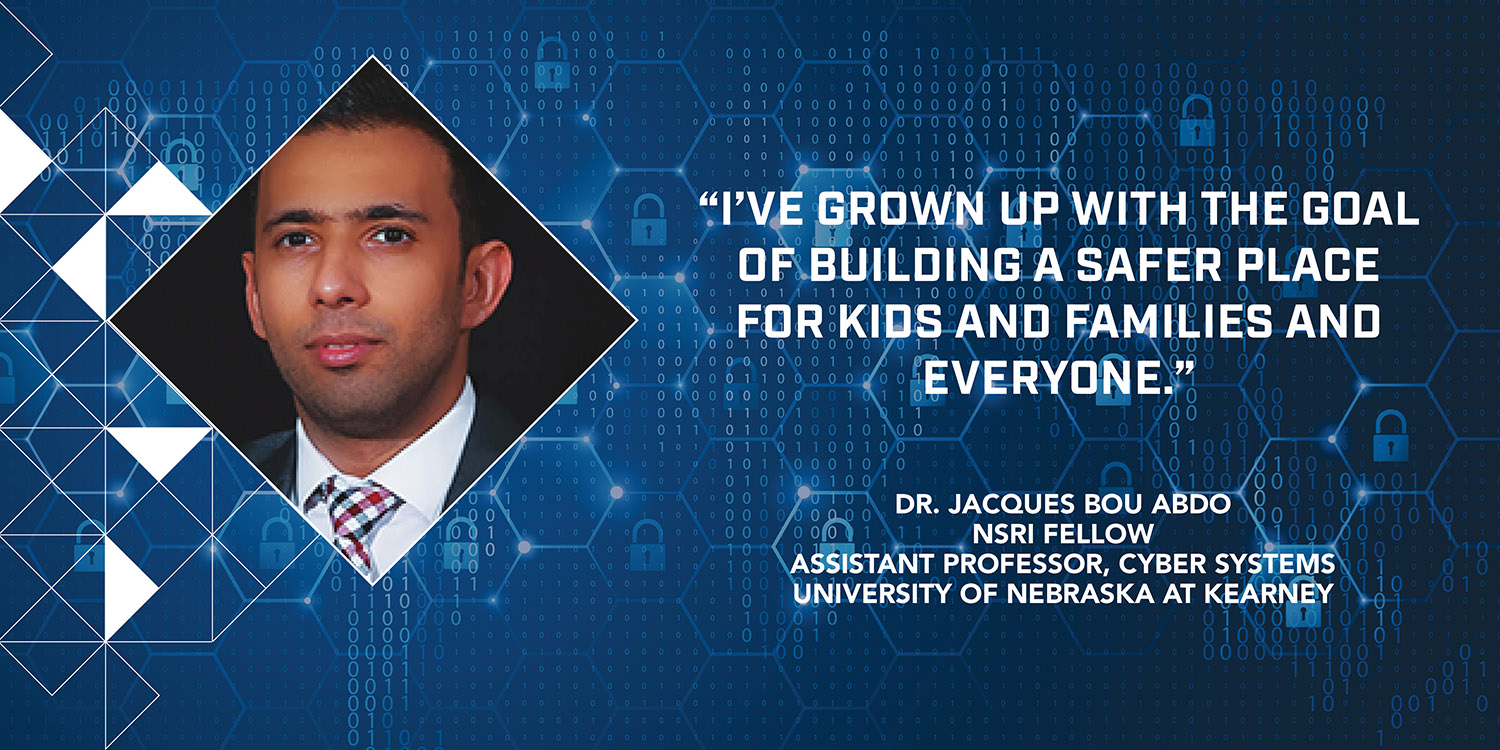 KEARNEY – Jacques Bou Abdo wasn’t born in a place where he could take his safety for granted. Growing up in Lebanon, his family’s well-being was frequently threatened.

“I come from a country where we have security conflicts on a regular basis,” he said. “In 2012, we had ISIS closer to my hometown than Lincoln is to Kearney. That was just one of many security incidents. Around 2000, we had another organization similar to ISIS, and before that was the civil war.”

Given his experiences, Bou Abdo inherently understands how much effort it takes to keep people safe. He has devoted his career to finding ways to make it easier to defend the peace.

“I’ve grown up with the goal of building a safer place for kids and families and everyone,” he said. “And it’s not just me. All of the people who graduated with me had an interest in safety and well-being and were trying to apply things like mechanics or electricity to issues of safety. I decided to explore technology for safety — to build more secure infrastructure.”

Bou Abdo’s studies have covered a wide range of subjects, from cybersecurity to business to economics and even ancient languages. His journey led him to his current role as an assistant professor of cyber systems at the University of Nebraska at Kearney where he describes himself as a theoretical computer scientist who tries to understand the foundations of technology and warfare.

He is also currently working with the National Strategic Research Institute (NSRI) at the University of Nebraska as an NSRI Fellow and a mentor to NSRI strategic deterrence interns. His focus is exploring how to expand game theory, a branch of mathematics used to model strategic interactions between individuals or groups with diverging incentives, to identify better nuclear deterrence strategies.

Bou Abdo’s NSRI work is part of his larger goal: to use inspiration from natural processes to improve technical systems and make them more sustainable. In his eyes, many of our technical systems are comparable to an old car — every time you drive it, something breaks down. We constantly must invent new solutions as problems arise. Bou Abdo would like to apply lessons drawn from adaptable natural systems to create adaptable technical systems that don’t trip up over a single problem.

“For example, we have immunity in plants and human bodies,” he said. “Those systems have been optimized for millions of years. They’re very robust. For an immune system to ‘crash,’ it requires extensive failures in various systems. We should ask, what can we learn from nature to help us better engineer a sustainable system?”

Elie Khoury, a collaborator of Bou Abdo’s since 2015, describes him as the “X-factor” — determination and calmness guide him as a leader with a vision.

“Dr. Bou Abdo’s career path and profile make him, above any doubt, one of the brightest cybersecurity scholars in the field,” Khoury said. “I will definitely recommend him, and it is my pleasure to have collaborated together on more than 10 projects so far.”

Bou Abdo’s commitment and approach could have far-reaching implications for warfare given that frequent cybersecurity attacks from adversaries won’t slow down any time soon.

“We have experienced just the tip of the iceberg,” he said. “The U.S. has a much greater ability than Russia to wage cyberwarfare. But the strategy of deterrence applies to cyberattacks. If you cripple my system, I can cripple yours. And the U.S. has much bigger targets for attacks and there aren’t really counterparts to these in Russia. We’re more dependent on network systems, which makes Russia more ambitious in building cyber weapons to attack us.”

Fortunately, University of Nebraska researchers like Bou Abdo have these challenges top of mind and are constantly seeking solutions by collaborating with NSRI, which serves as the University Affiliated Research Center of U.S. Strategic Command, designated by the Department of Defense (DOD).

“A main factor in joining the University of Nebraska at Kearney was NSRI,” Bou Abdo said. “A lot of federally funded research is developed but doesn’t get implemented. That’s a lost opportunity.

“What’s interesting about working with NSRI is that they tell us what the DOD really needs. We can then develop solutions that are really going to be implemented. Being able to get ideas to the DOD and get feedback is a win-win for the DOD and academia.”