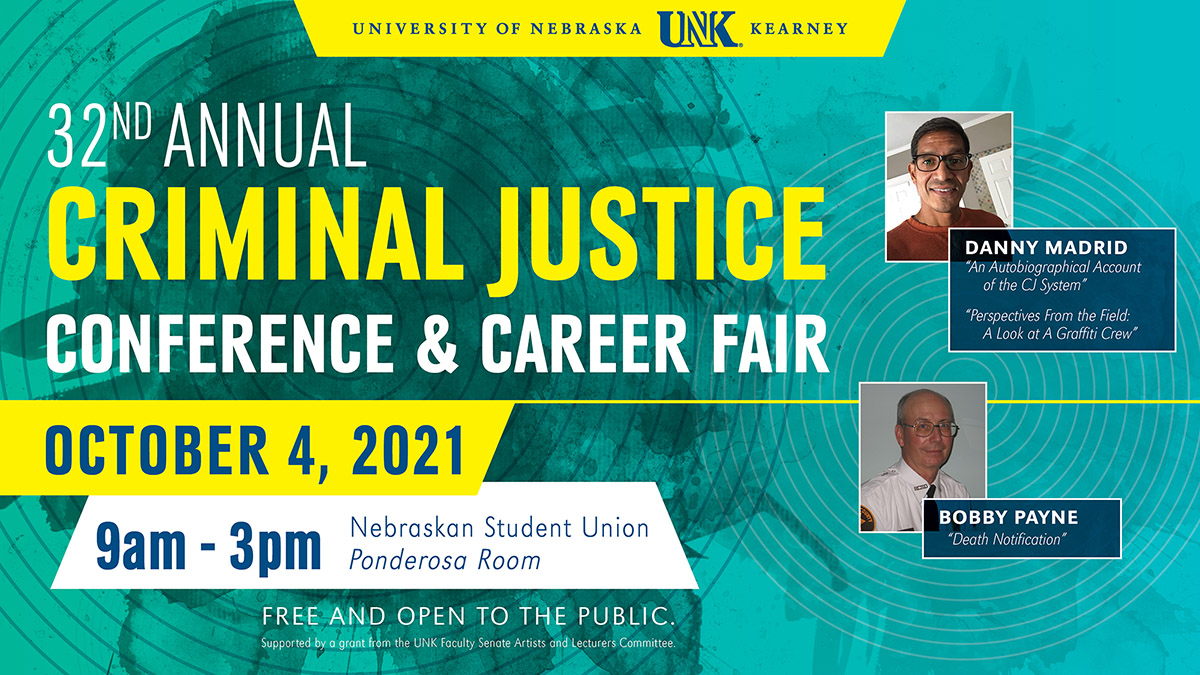 KEARNEY – The University of Nebraska at Kearney is hosting its 32nd annual Criminal Justice Conference on Monday, Oct. 4.

Scheduled for 9 a.m. to 3 p.m. in the Nebraskan Student Union Ponderosa Room, the event features two keynote speakers and a career fair with roughly 30 agencies represented. It’s free and open to the public.

This year’s speakers are Danny Madrid, a doctoral candidate at the University of Nebraska at Omaha, and Bobby Payne, lead chaplain for the Kearney/Buffalo County Chaplain Corps.

His research interests include gangs, juvenile delinquency and understanding the experiences of youth involved in the criminal justice system. His dissertation research is an ethnographic analysis of a longstanding graffiti crew in Los Angeles. The fieldwork consists of interviews with graffiti artists to gather their opinions of street art and the process of gentrification in Los Angeles.

Madrid has received various certificates of recognition from the University of Nebraska-Lincoln and California State University for his contributions to student learning and community engagement.

He’ll present “An Autobiographical Account of the CJ System” and “Perspectives from the Field: A Look at a Graffiti Crew” during the Criminal Justice Conference.

Payne has served as a chaplain for more than 25 years. He’s a former member of the Nebraska Serious Injury and Line of Duty Death Response Team and former president and vice president of the Nebraska Law Enforcement Chaplains Association.

Payne was recognized with the 2010 Chaplaincy Award from the Kansas-Nebraska Convention of Southern Baptists and he received a Presidential Coin from the International Conference of Police Chaplains for his contributions to law enforcement chaplaincy. He holds Bachelor of Arts and Master of Divinity degrees, along with basic, senior and master certificates from the International Conference of Police Chaplains, and has more than 750 hours of law enforcement chaplaincy training.

His presentation is titled “Death Notification.”

The Criminal Justice Conference was founded by the late Jim Gilbert, a former law enforcement officer and longtime criminal justice professor at UNK. It’s organized by UNK’s Department of Criminal Justice and supported by a grant from the UNK Faculty Senate Artists and Lecturers Committee.