MCCOOK – University of Nebraska at Kearney senior Korinne Hansen has a love for all things agriculture.

The fifth-generation rancher and farmer raises cattle, corn, cane and soybeans on her family’s farm, established in 1887 north of McCook. Her upbringing inspired her to study pre-veterinary medicine at UNK. 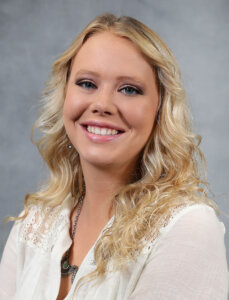 “Being a farm kid around animals, I just love working with them and always had a passion for them, especially large animals,” Hansen said.

To prepare for veterinary school, Hansen interned this summer at Red Willow Animal Clinic in McCook, where her mother Adeline worked as a veterinary technician.

“I would always go to the clinic with her and see stuff, so that really steered me in that direction,” said Hansen, who trained under Dr. Wayne Watkins, the same veterinarian her mother worked with.

Hansen worked with both large and small animals during the internship, though she prefers the large ones, particularly cattle. She learned to pregnancy check her own cows, which she artificially inseminated in June with the help of her husband Gage Seiler. Watkins supervised Hansen during the check and showed her what to look for on the ultrasound monitor and what to feel for inside the cow.

Hansen was involved in surgical procedures, as well. She sutured the eyes of calves suffering from pink eye and inserted medication and assisted Watkins with the repair of a steer’s gastrointestinal wall, which was punctured by a rancher who tried to relieve the animal’s bloating.

The clinic also came to the rescue when rodeo horses got into cattle feed. Horses don’t digest grain like cattle do, Hansen said, so they can get sick if they eat too much. To treat the horses, Watkins ran a tube through their noses, down the esophagi and into their stomachs. Hansen fed water, then mineral oil, into the tubes to move the grain through the horses’ intestines.

Although the UNK student spent most of her time working with large animals, she also gained experience on the small animal side of the clinic. Hansen often intubated those animals before procedures.

“The smaller the animal, the harder it is, because it’s hard to get them to open their mouths wide to get that tube into them to get them to breathe,” she said.

Additionally, she completed blood draws and helped with booster shots for young animals.

“It’s fun to see the new little guys that will be your patients,” said Hansen, who was treated like a regular technician on staff.

There were emotionally difficult moments, too, such as discovering cancerous tumors in a puppy or having to euthanize someone’s pet.

“It’s hard to not cry when you enter the room for some of those procedures,” she said.

Working in a veterinary clinic can be physically painful, too. Hansen was bitten by a cat and subsequently put on antibiotics, but she’s never been injured by a large animal. There was one near miss, though.

“I got a little close to getting injured when a bull pushed a gate back and he came back at me. I ran for my life to the gate,” she said with a chuckle.

The internship at the McCook animal clinic was Hansen’s third round of on-the-job training. In the summers of 2018 and 2019, she worked with hogs at Buffalo Plains Genetics near Maywood. That’s where she learned how to perform a necropsy and was first introduced to ultrasounds.

Hansen believes her internship experiences, along with the hands-on biology classes and Pre-Veterinary Club activities, will give her a competitive edge when she applies to veterinary schools after graduating from UNK in December 2022.

“Dr. Wayne tells me when he was my age, he never had this much experience in his life,” she said. “I feel very confident with all of the stuff that I know how to do already. I feel more prepared.”

After finishing her professional degree, Hansen would like to return to the family farm and practice where her love of animals first developed.

“I’m very connected to the family farm, so I will probably be in southwest Nebraska the rest of my life,” she said.