Allen Thomas, Martonia Gaskill and Peter Longo accepted the awards during UNK’s Faculty/Staff Convocation in the Fine Arts Recital Hall. Each honoree received a plaque and $2,000.

The Pratt-Heins Foundation has sponsored the annual awards for the past 40 years. They were presented by foundation trustee Tom Tye. 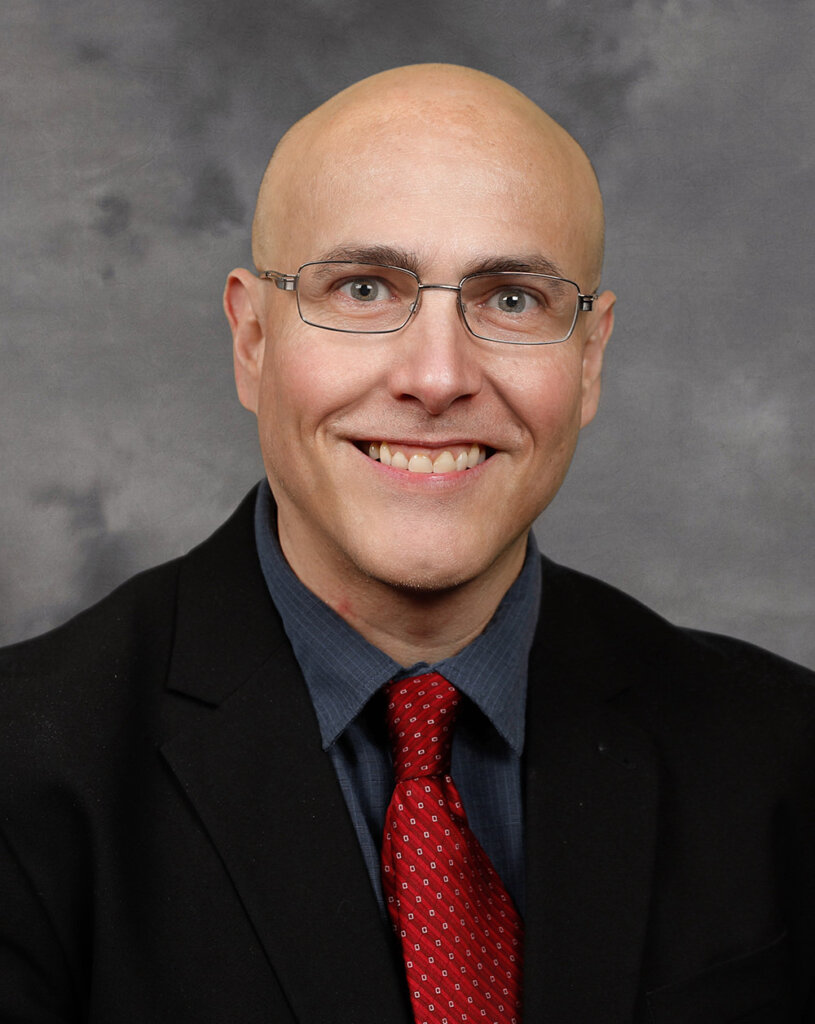 Thomas, an associate professor of organic chemistry, received the Pratt-Heins Award for Scholarship and Research.

A UNK faculty member since 2014, Thomas has 78 conference presentations, 26 peer-reviewed publications and nine patents, with seven more patent applications currently pending. He’s been awarded more than $870,000 in research funding, including a $400,000 grant from the National Institutes of Health to study brain cancer and Alzheimer’s disease treatments in collaboration with the Icahn School of Medicine at Mount Sinai and the University of California San Francisco.

One of the challenges for scientists is designing drugs that are capable of crossing the blood-brain barrier, the layer of cells that protects the brain from toxic substances. Thomas and his research team are studying ways to use one of the body’s natural mechanisms for transporting amino acids, the LAT-1 protein, to deliver drugs into the brain.

“His research and scholarship have the potential to bring lifesaving drugs to market through a deeper understanding of the cellular mechanics that move chemicals across barriers,” Tye said during Friday’s presentation.

Thomas has served as a mentor for 30 undergraduate researchers at UNK. One of those students, Hannah Way, was selected to present her research during the prestigious Posters on the Hill conference sponsored by the Council on Undergraduate Research. That project focused on designing molecules that can block a transport protein linked to addiction, epilepsy and hyperuricemia. 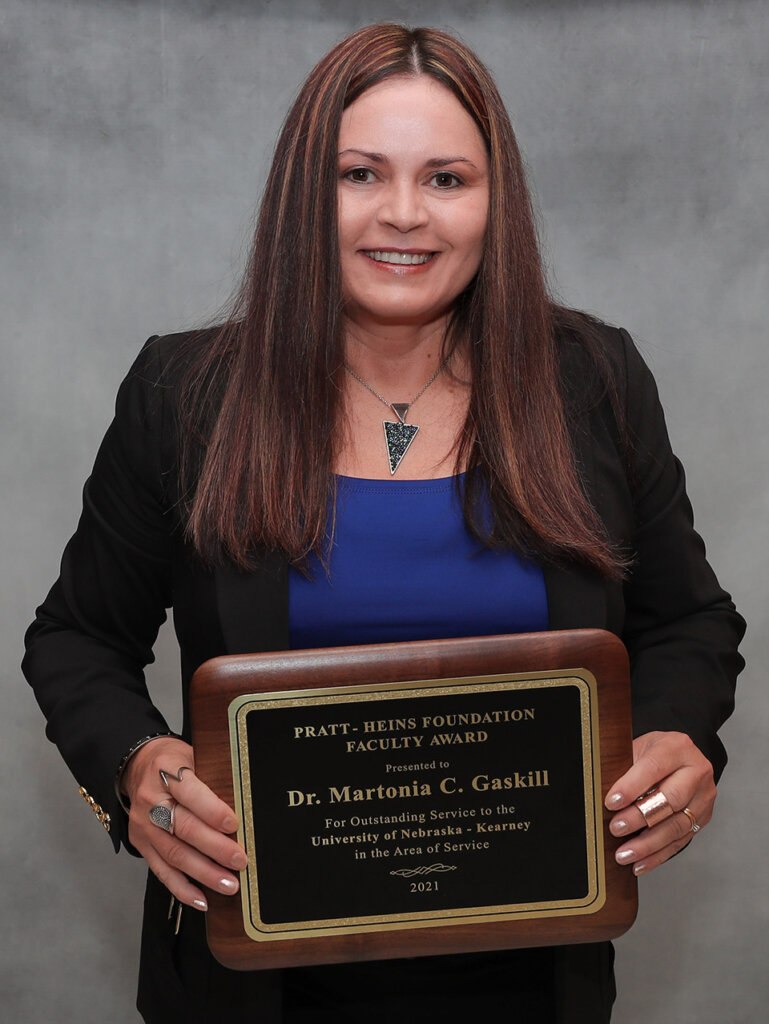 Gaskill received the Pratt-Heins Award for Service, which recognizes the honoree’s contributions to the university, community and education as a whole.

Tye described her as someone who’s dedicated not only to teaching, but also to countless state and university initiatives.

“She is truly a person with boundless energy and enthusiasm who is willing to share her vast talents with others,” he said.

A UNK faculty member since 2012, Gaskill is an associate professor in the Department of Teacher Education and director of the instructional technology master’s program.

She serves on the Future Ready Nebraska Council through the Nebraska Department of Education and was involved in the release of the first-ever Future Ready Nebraska Digital Learning and Ed Tech plan. Gaskill is also a member of the University of Nebraska Diversity Officer’s Collaborative and she previously served on the NU Engagement Council and Presidential Academic Calendar Task Force.

Tye called her “one of those go-to people” who uses her wisdom, talent and energy to lead while inspiring others to get involved.

She’s been a member of UNK Faculty Senate since 2013 and served as president in 2020-21. As president, Gaskill led an anti-bullying initiative, navigated obstacles related to COVID-19 and partnered with the other NU campuses to take a united stance against racism and inequity and launch a universitywide diversity and inclusion plan. 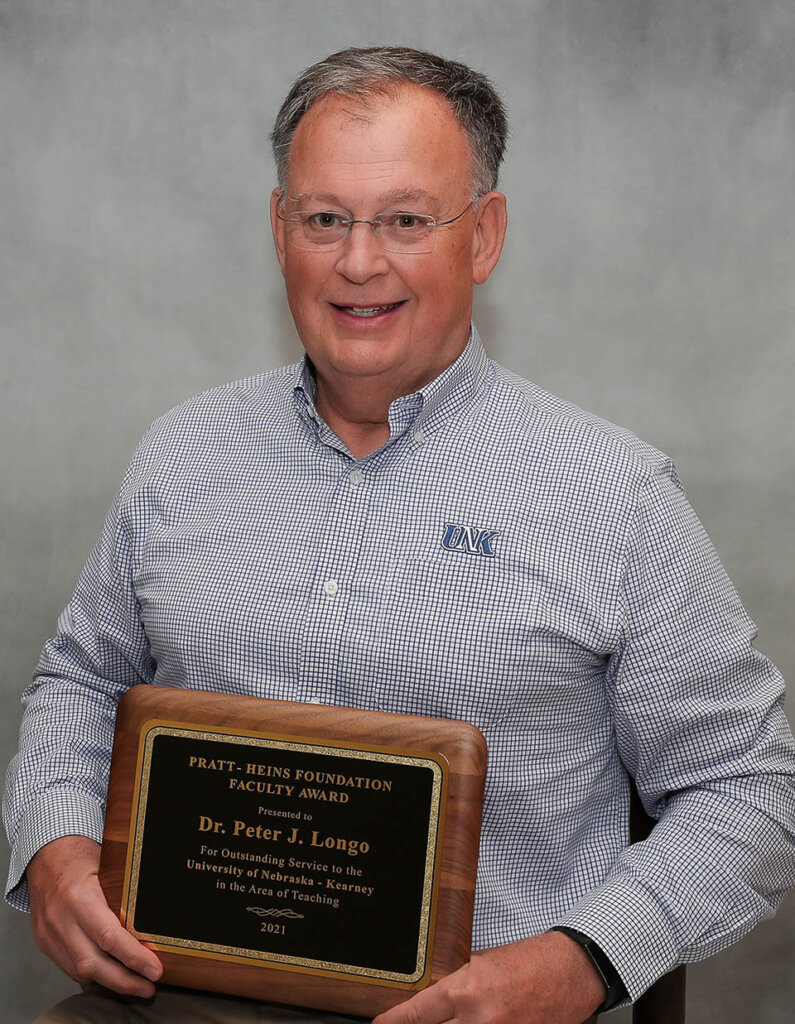 A political science professor and associate vice chancellor for academic and student affairs, Longo received the Pratt-Heins Award for Teaching.

It’s one of many honors he’s received since joining the UNK faculty in 1988. Longo has also been recognized with the Leland Holdt/Security Mutual Life Distinguished Faculty Award – UNK’s most prestigious faculty award – as well as the Aksarben Outstanding Nebraska Educator Award and the University of Nebraska Foundation’s Harlan J. Noddle Award for Distinguished Development Service. He’s been named professor of the year by the UNK student body numerous times.

His commitment to undergraduate research led to the development of the Undergraduate Research Fellows and Summer Student Research programs, and he played an integral role in the creation of the College of Arts and Sciences.

“He’s influenced, inspired, mentored and nurtured countless students at UNK, and I would add that he inspires his colleagues and community members by his example,” Tye said.

“There’s no one who cares more about the success of UNK students than Dr. Peter Longo.”