Work will begin this week on a $26.65 million project that replaces and relocates the fraternity and sorority housing on campus.

The new building will feature chapter lounges on the first floor and housing pods on the second and third floors. It’s designed for larger chapters with more members living on campus.

Martin Hall will have a similar layout, with the addition of shared chapter rooms in the basement and a community “great room”/clubhouse space on the main floor that encourages interaction among the different organizations. By renovating Martin Hall, UNK is able to utilize an existing resource and preserve some of the building’s historic elements while adding new amenities and upgrades.

With up to 165 beds in the new building and 80 in Martin Hall, there’s enough living space and chapter room availability for all 12 UNK fraternities and sororities.

The new Fraternity and Sorority Life housing complex is located just east of the Nebraskan Student Union, putting some of UNK’s most active students directly next to a hub of social activity on campus. It also gives them easy access to dining options inside the union.

Proposed opening dates are August 2022 for Martin Hall and January 2023 for the new residence hall.

The replacement project will be funded with $10 million in facilities reserves and $16.65 million from an internal lending program. By eliminating Louie’s Diner, a food court in URS, the university expects to save $250,000 to $350,000 in yearly food services expenses. Additional savings will be realized by sharing residence hall staff with nearby campus housing. 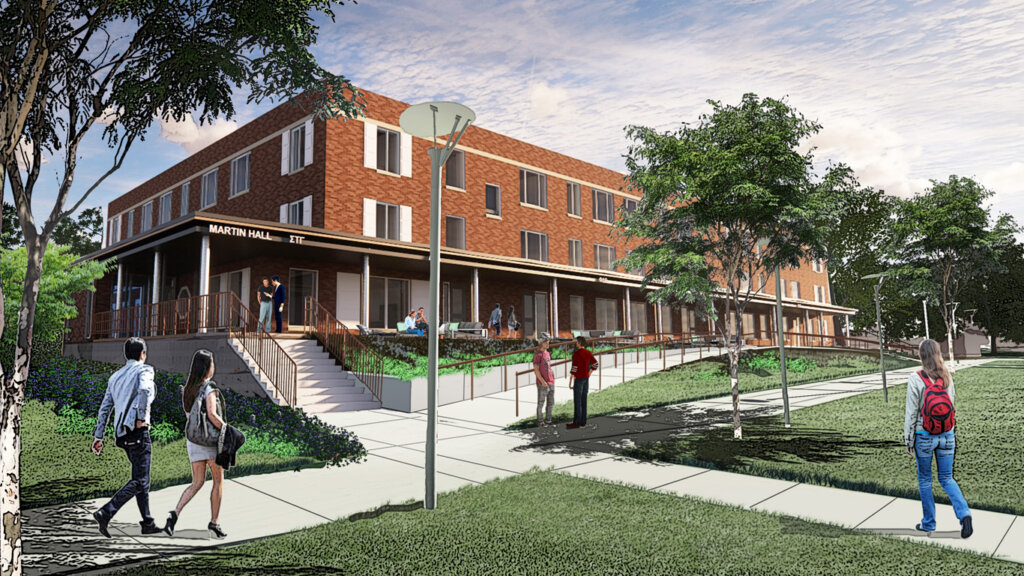 Fencing will be installed around the construction site on Wednesday.

Lot 6 was closed earlier this summer. That area, as well as the former Conrad Hall site, will be used to create an enhanced green space that extends the student union plaza.

ADA parking between Antelope and Nester halls and the meters east of the student union will be maintained.