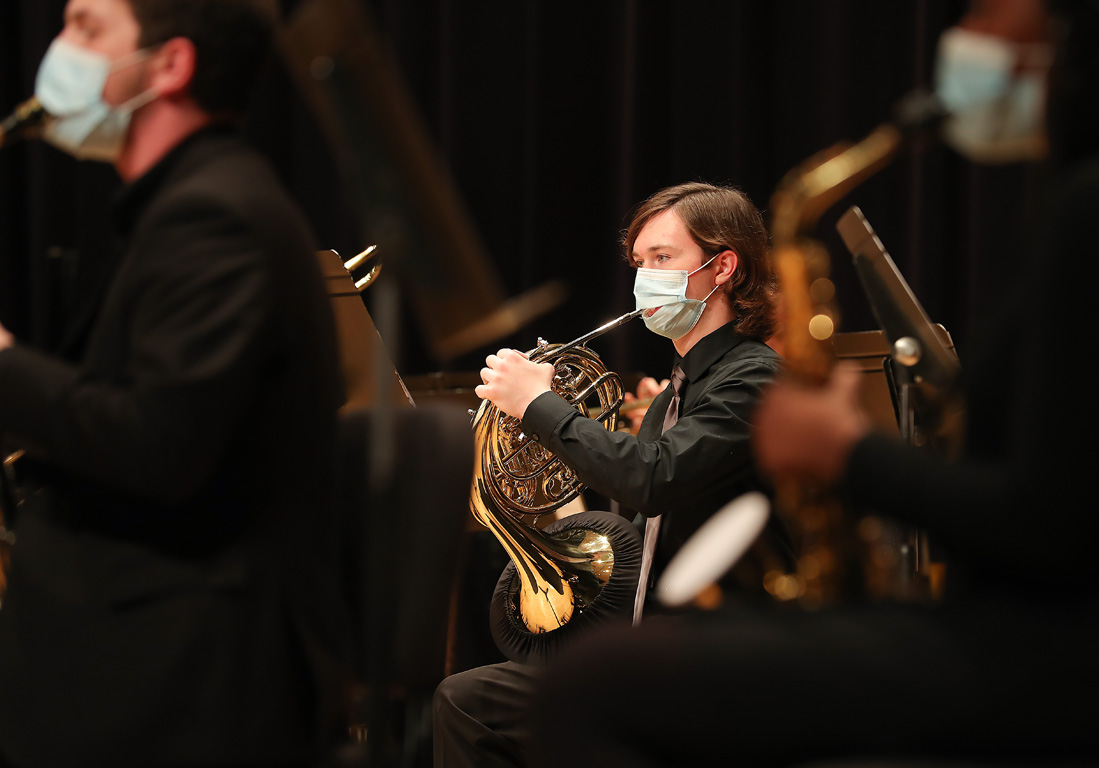 The UNK Wind Ensemble will perform an outdoor concert 4:30 p.m. Thursday (April 29) on the lawn just east of the Fine Arts Building on campus. It’s free and open to the public.

In the event of inclement weather, the concert will be rescheduled to 4:30 p.m. Tuesday (May 4). 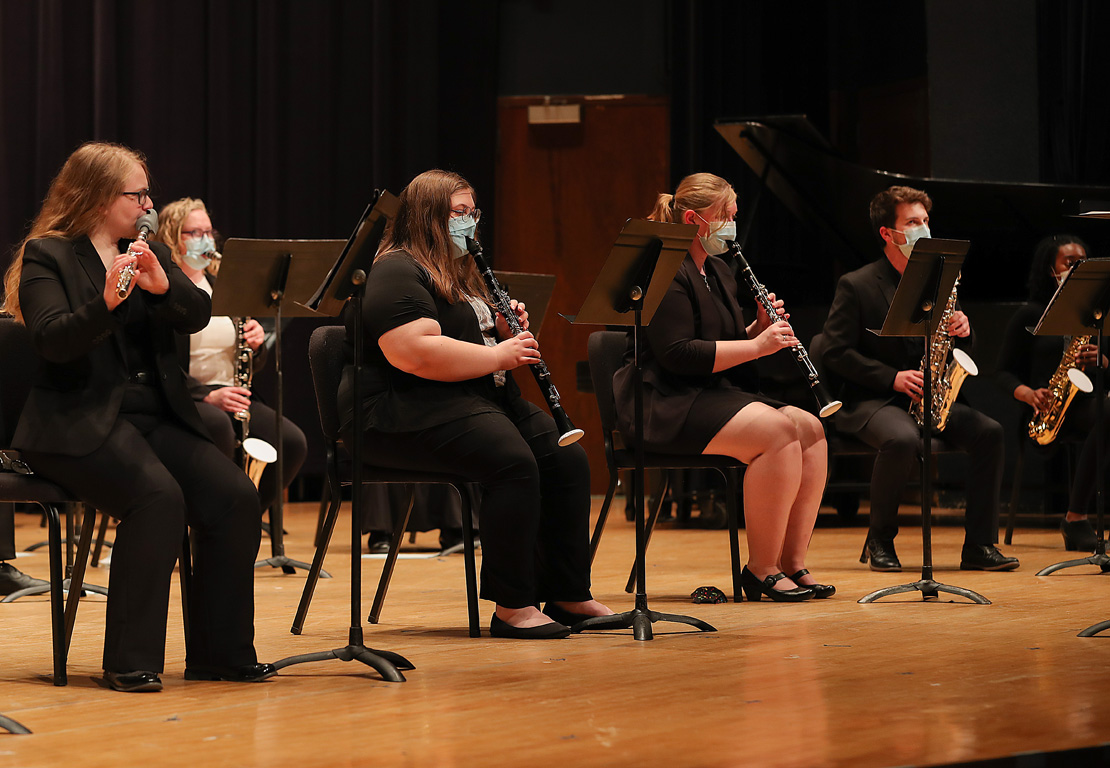 KEARNEY – University of Nebraska at Kearney senior Sydney Wilson can sum up the past year in one word – “crazy.”

“It’s been ever-changing and evolving,” said Wilson, a music education major from Minden.

For Wilson and other members of the UNK Wind Ensemble, it’s definitely been a year unlike any other.

Because of COVID-19 restrictions, the group lost about half of its rehearsal time. And when they got together for 30-minute practice sessions, things looked and sounded a lot different.

They wore face masks and used instrument covers to contain aerosols. Indoor capacity limits and spacing requirements prevented all 36 members from rehearsing together, so they split into two smaller groups and played flexible instrumentation pieces.

“I had to completely shift gears from a programming standpoint and come up with all new musical choices to fit the flexible instrumentation idea. That was probably the biggest challenge from my end,” said director of bands Duane Bierman.

The change was equally challenging for UNK students, who were forced to perform without certain instruments.

“Because we had such a weird mishmash of instruments in some of our groups, anyone could play any part of the piece. There were trumpets playing parts intended for flutes. It was a really interesting approach to band music,” said junior trumpeter Greg Stoner, a music education major from North Platte.

Despite all the obstacles, Bierman and his band members aren’t complaining. They see the silver lining.

“It’s easy to look at all of these things and view them as negatives, but we know there are many colleges across the country that have been virtual this entire time,” Bierman said. “There are people in college bands who haven’t played an instrument with anyone else for over a year now, and we’ve been able to do that. We’re really, really thankful that we get to do what we’ve been doing.”

Wilson, who plays the flute and piccolo, said these experiences opened her eyes to new possibilities.

“We can take some of these flexible band pieces and present something that even small high schools can perform,” she said.

The concert formats can also be viewed in a positive way. Over the past year, the largest crowd for a UNK band performance was around 50 socially distanced people. However, virtual options allowed friends, family members and prospective students to watch from across the state, country or world.

“We’ve gotten more publicity by having everything livestreamed,” Wilson noted.

That being said, they prefer an in-person audience.

The UNK Wind Ensemble is capping this “crazy” year with an outdoor concert scheduled for 4:30 p.m. Thursday on the lawn just east of the Fine Arts Building on campus. The roughly 40-minute performance includes seven pieces Bierman describes as “music you’d hear in a band shell at a summer concert.” It’s free and open to the public.

“This is my last concert with the Wind Ensemble, so I’m extremely grateful for the opportunity to celebrate what we’ve accomplished during the four years I’ve been here,” Wilson said.

For other campus and community members, the event is a chance to experience live music again. Bierman hopes people stop by to listen, but he’s not overly concerned about the audience size.

“Even if we have nobody there, we’re still going to have a blast playing because we’re going to be playing together for the first time in over a year,” he said.

WIND ENSEMBLE MEMBERS
Members of the UNK Wind Ensemble are: 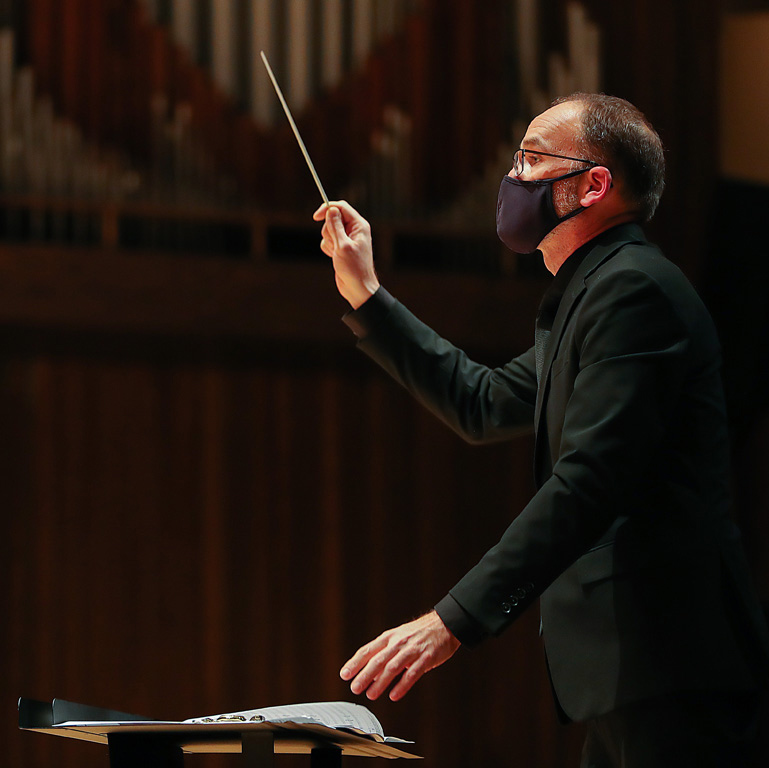 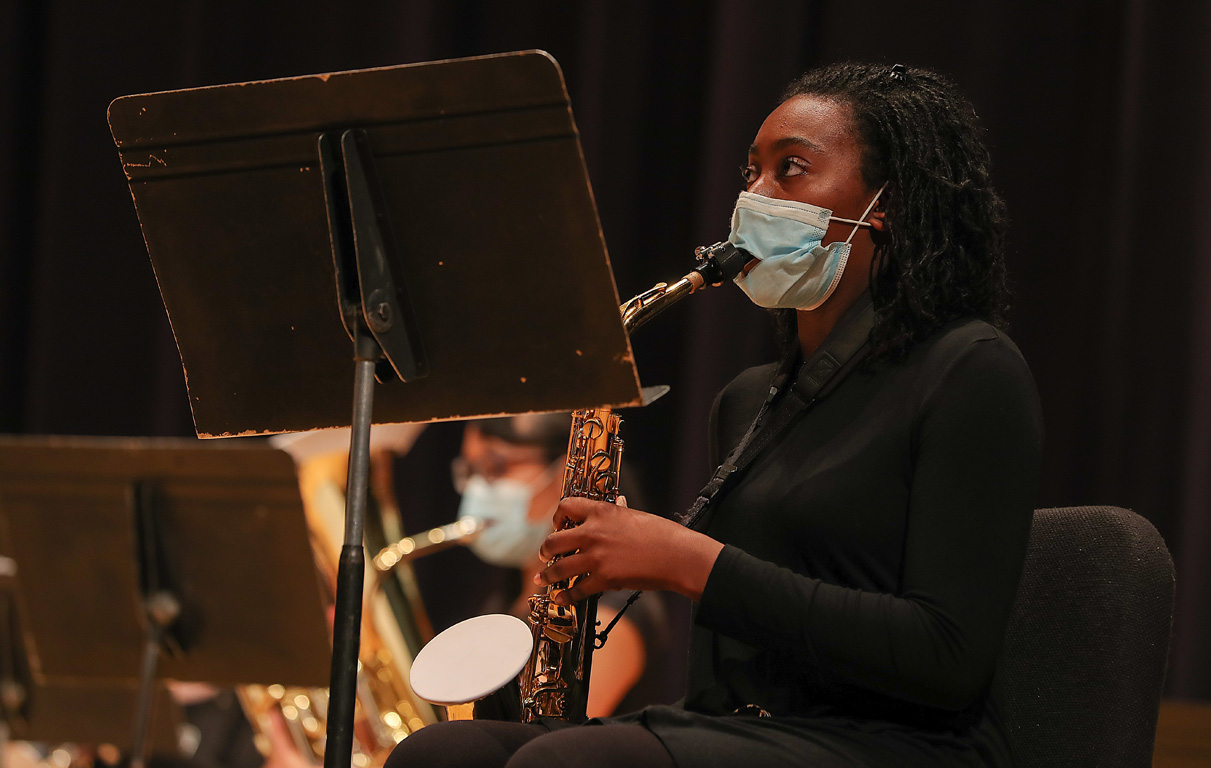