KEARNEY – Haley Simental believes everything happens for a reason.

“It’s all according to God’s plan,” she says of her unexpected journey to the University of Nebraska at Kearney.

There was a time when Simental didn’t know whether she’d ever play collegiate basketball again. Now, she’s the starting point guard on a UNK team that’s 23-3 and ranked No. 26 in Division II.

A native of Pueblo West, Colorado, Simental committed to the University of Denver, a Division I program, as a senior in high school. Expectations were high for the three-time all-state performer and former South Central League MVP, who left Pueblo West High School with several program records, including assists in a season (119) and career points (1,411) and free-throw percentage (74%).

However, her collegiate career got off to a rocky start.

Simental played in just three games as a freshman in 2015-16 before a right ankle injury sidelined her for the remainder of the season. She had surgery to remove bone spurs, stimulate cartilage growth and tighten ligaments, but the problems persisted.

“It never really felt like it healed right,” Simental said. “I never felt 100%. I was always in pain.”

Cortisone shots helped Simental get through the following season – her best as a Pioneer – but she was never pain-free.

Another surgery was scheduled a couple weeks into fall practice in 2017, forcing her to miss the entire season. This time, the procedure tightened ligaments and removed a bursa sac, more bone spurs and an extra bone that grew near her Achilles tendon, and she underwent an osteotomy to realign her foot.

“I almost quit my junior year because I was in a lot of pain and the doctors didn’t know if we could fix it or if there was any solution where I could play again,” Simental said. “They just weren’t sure how it would respond.”

Instead of giving in, Simental drew inspiration from her late grandfather Patrocinio, a Mexican immigrant she calls her hero.

“The purpose of his life was to give his family a better opportunity in the U.S.,” she said. “I felt like if I gave up then I wasn’t living up to the example he set.”

Simental knew she had to continue chasing her dream.

She returned to the court in fall 2018 and fought through another season.

“I played my senior year while trying to recover,” she said. “It was kind of hard to get in a rhythm and have a bigger impact on that team.”

Simental finished her Denver career with 167 points, 52 rebounds and 35 assists in 63 games, including seven starts. She averaged just 11 minutes and 2.7 points per contest.

With at least one more year of eligibility remaining, Simental decided to enter the transfer portal. She had her sights set on Regis University, another Denver school close to her family, then a text message altered her plans.

‘EXACTLY WHAT THIS TEAM NEEDED’

Simental had no intention of visiting UNK when assistant coach Devin Eighmey first contacted her.

She already had a relationship with Regis head coach Molly Marrin, a former assistant at the University of Denver, and the seven-hour drive from West Pueblo to Kearney seemed like a lot to ask of her family.

But, her younger brother David was transferring from Central Wyoming College, and UNK happened to be one of his scheduled stops. Simental decided to tag along.

“By the time she was done with her visit here, we were convinced she would help our program,” said UNK head women’s basketball coach Carrie Eighmey.

The Eighmeys, a wife-and-husband coaching team, already knew Simental had the talent to make an immediate impact.

“We wanted to make sure she fit our team chemistry-wise,” Carrie Eighmey said. “We felt like our team was really, really close and they got along really well. We didn’t want to mess that up.”

During that visit last spring, it was clear the 23-year-old had the leadership qualities, maturity and experience the Eighmeys were looking for.

“She’s selfless. She has a growth mindset. She constantly wants to get better. That mentality really fits with so many of the young women on our team,” Carrie Eighmey said. “She’s not exactly like every single player on our team, but she’s exactly what this team needed.”

“I really liked the coaches and their values. They’re Christian, and that was really important to me,” she said. “My faith is something that got me through all my injuries.”

The 5-foot-8 point guard also saw a ton of potential for a team that went 15-14 last season and returned nine players, including four who averaged double-figure scoring in 2018-19.

Although David decided to enroll at Colorado State University-Pueblo, his older sister realized on the car ride home she was destined to be a Loper.

“Coach Carrie challenged me to push myself and grow to be a better person every day,” Simental said. “I knew this is the place I needed to be if I wanted to grow and have a really good opportunity to play high-level basketball on a really good team.”

‘DEDICATED TO HELPING EACH OTHER’

The graduate transfer showed off her abilities during her first game in a Loper uniform, recording 26 points, six assists and five rebounds in a season-opening win over Minnesota-Crookston. She went 10 of 17 from the field, including 4 of 8 on 3-pointers.

That set the tone for a standout campaign.

“Haley fits what we do and how we play so well,” Carrie Eighmey said. “She’s done a great job of learning, in a short amount of time, what we want from her both offensively and defensively.”

Simental ranks fifth in the Mid-America Intercollegiate Athletics Association (MIAA) in assists and assist-to-turnover ratio (1.8) and seventh in 3-pointers.

As a team, UNK leads the conference in assist-to-turnover ratio (1.44), assists per game (17.7), field goal percentage (46.3%), field goal percentage defense (35.8%), scoring defense (56 points per game) and average scoring margin (20.9). The Lopers are second in points per game (76.9) and they’ve scored more than 100 three times this season, including a 127-39 home win over Manhattan Christian when they set school records for points scored and 3-pointers made and attempted (24 of 48) while tying the all-time marks for assists (38) and margin of victory, matching an 88-point win against Nebraska Christian earlier in the season.

UNK, which doesn’t have a senior on the roster, has won 11 of its last 12 games and currently sits in second place in the MIAA with a 12-3 conference record.

Simental attributes that success to the group’s team-first approach.

“Nobody is here because they have a big ego and need to be the best player,” she said. “We’re all dedicated to helping each other. We share the same values and we all have the same goals. We want to get better every day.”

The Lopers have four regular-season games remaining before the MIAA Tournament, including home matchups this week against Northeastern State (5:30 p.m. Thursday) and Rogers State (2 p.m. Saturday).

Simental, who is pursuing a master’s degree in physical education with a sports administration emphasis, has a pretty straightforward goal heading down the homestretch.

“Take one game at a time and win every game.”

She also recently learned the NCAA granted her a sixth year of eligibility, meaning she’ll be back next season.

“It feels like everything at the University of Denver happened so I could be here for two years,” Simental said. “I’m just really happy that I get to remain a part of this program and continue to be around my teammates and keep growing as a person.

“I love playing basketball, and I’m really grateful that I can play one more year.” 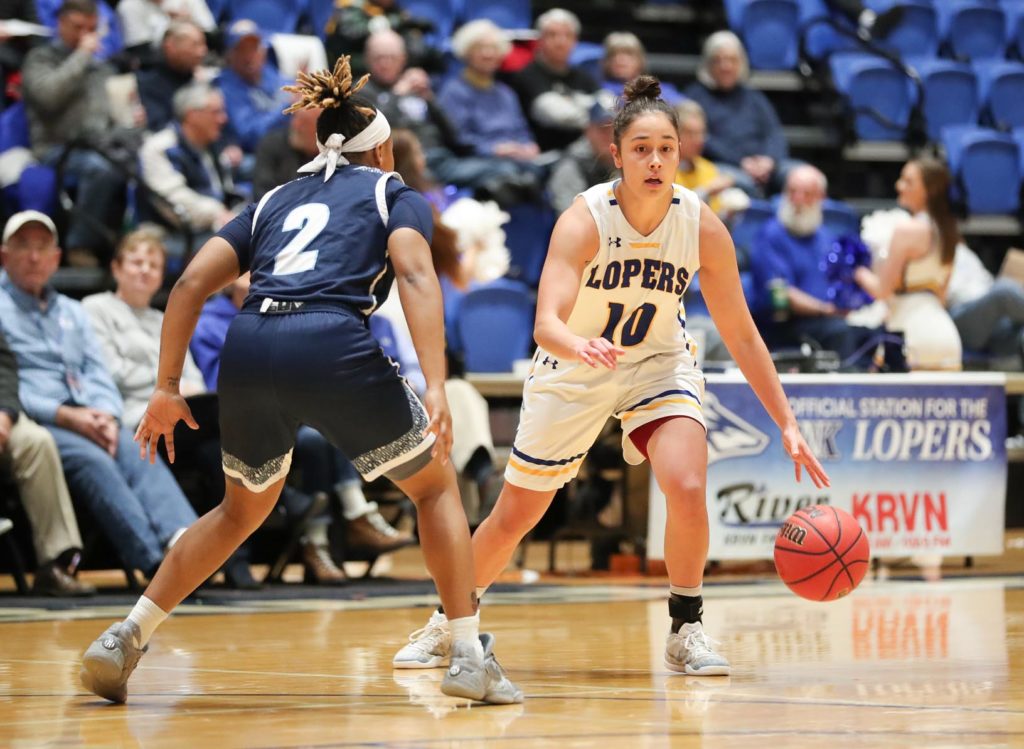